Since the time of construction of the first glass architecture, the Crystal Palace in 1851, glazed facades in modern architecture have become the norm.

Actually, was the Great Conservatory the test-bed for the prefabricated glass and iron structural techniques which Sir. Joseph Paxton pioneered and employed for his masterpiece.

The renowned English gardener, architect and engineer brought glass from the greenhouse to the architectural domain for the first time. 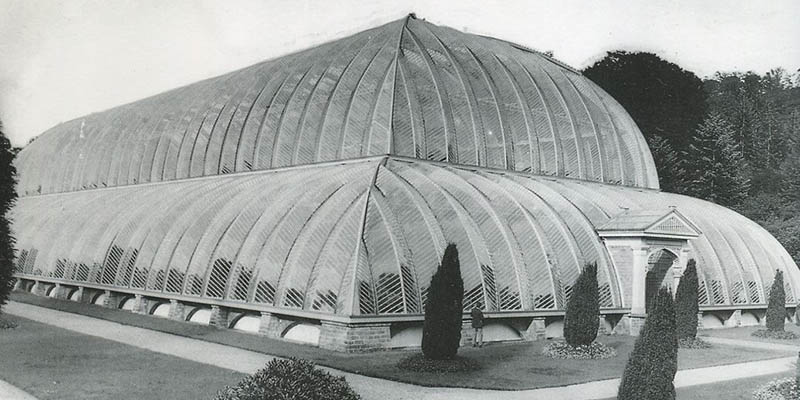 The concept of “transparent wall” was carried forward as a “glass curtain wall” experiment in 1864 in Oriel Chambers, Liverpool by architect and inventor Peter Ellis.

Built in 1890 in Chicago, the Reliance Building is the first skyscraper to have large plate glass windows that make up the majority of its facade, foreshadowing a design feature that would become dominant in the 20th century.

Noted examples of glass architecture in Europe were the Maison du Peuple, Brussels, by Horta, (1896-9), and the Samaritaine Department Store, Paris, by Frantz Jourdain, (1905), now refurbished with a rippling glass façade by SANAA.

From that time architects have been increasingly fascinated by the use of glass so much that Paul Scheerbart, author of “Glasarchitektur” in 1914, affirmed “Without a glass palace, life is a conviction.”

The best known explorations of the architectural possibilities of the glass wall were those of Mies Van Der Rohe. He designed what is said to be the world’s first glass tall building, a stunning competition proposal for the Friedrichstraße skyscraper in Berlin: a full faceted glass facade.

It wasn’t until the middle of the last century that technology allowed for the construction of multi-storey glazed facades such as those on Bunshaft’s Lever House and Mies van der Rohe’s Seagram Building.

One of the most debated topics in modern glass architecture is the Louvre Pyramid. Designed by Chinese-American architect I. M. Pei, it has become a glass landmark of the city of Paris. The architect insisted on total transparency in the Pyramid so that the tourists could see the historic buildings all around.

The challenge was to create extra clear glass since at that time most glass had a slight bluish or greenish shade. Pei teamed up with Saint-Gobain to find a type of glass that was transparent enough, light enough and strong enough to be used for the Pyramid. After months of research, they came up with an extra clear laminated glass, with unbeatable mechanical properties and high optical quality featuring Saflex© Clear PVB interlayers.

Today, glass continues to offer architects around the world the ability to meet both structural, aesthetic, safety and energy requirements.

We asked some of the most influential architectural firms in Europe about their most interesting glass building and why they chose glass.

Michele Rossi, Architect and Founding Partner of Park Associati says “Farnsworth house is a wonderful example of a delicate equilibrium between structure and glass, it is a work of art which showed us how powerful glass is as a material. But its space is hard, almost unlivable, as it allows no privacy or protection. Maybe this is the reason why it is so fascinating. Glass is an extraordinary material, the most versatile we could use in our architecture. To achieve its maximum architectural potential requires being fully aware of a project’s technical aspects.

For the Luxottica Headquarters in Milan, we designed a curved façade with a double glass skin, trying to achieve a light balance between reflection and transparency, technology and functionality, through the lens effect of the glass skin. An automatic shading system integrated within the double skin gives it a natural vibrancy thanks to the changing daylight, protects the building from the sun, at the same time maximising the view from the inside.” 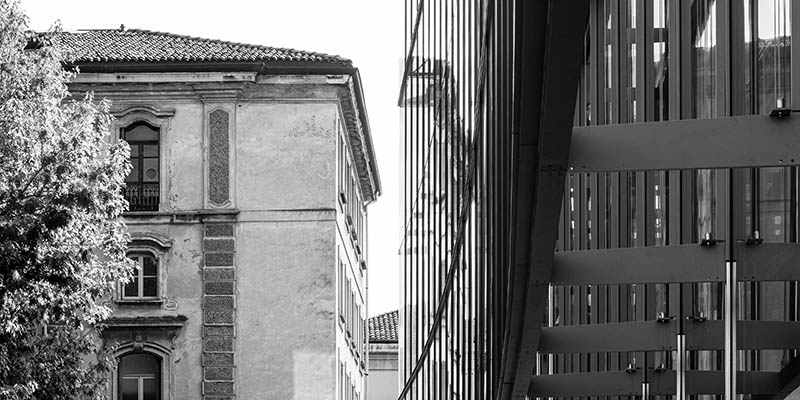 “At Park Associati, we always use low iron glass for our façades and we try to optimise the solar factor index in a balance with the building’s solar control system.
Transparency and purity are the two requisites when working with glass in our projects. When realising a façade, there are many technical aspects we need to deal with. But glass is always our starting point. Using glass for a façade needs a wide knowledge and awareness of this material. To complete our architectural vision and to guarantee spaces that are comfortable and healthy, we usually work with façade specialists.” continues Michele.

Another noteworthy future glass architecture will be the New Terminal at Schiphol, in Amsterdam, developed in joint venture by Estudio Lamela and KAAN architecten. Due to the current COVID circumstances this project had to get on hold.

Tatiana Calvo Aller, Senior Architect at Estudio Lamela says “The main design concept of this façade is the appearance of the big roof gently resting on the glass panes. To create the appearance that glass itself is supporting the roof, the load bearing columns had to be incorporated in the façade and articulated as a part of the façade mullions, over which the roof is floating.

Floor slabs are recessed, and together with slender columns and large glass pieces add to the appearance of verticality. The Shell consists of two elements, the roof and the glazed façade which characterize the design both externally and internally. The design vision for the Shell can be summarized in the following attributes: sophisticated, robust, and future-proof.” 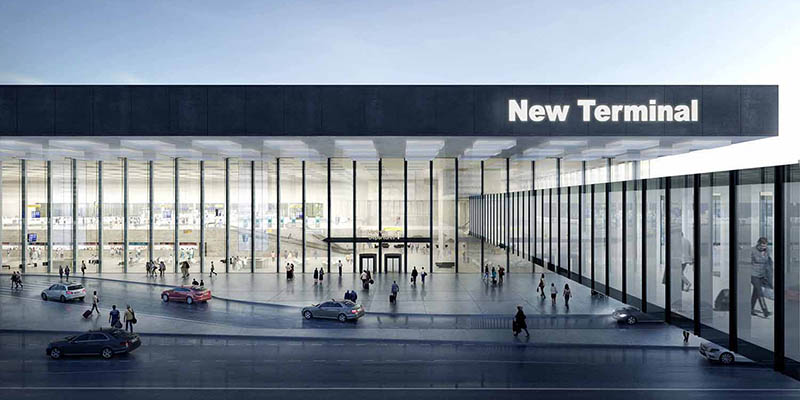 “The main intention is for the Shell to appear neat and elegant. The proportions are thus very important. The slenderness of the mullions and the detailing of the horizontal elements such as floor slab connections should add to the perception of a uniformed ceiling hovering above the open spaces. Main architectural concept of the façade is the inverted appearance from the exterior, where large glass panes appear as a big transparent block supporting the roof, while the columns and mullions are articulated as a shadow gap.

To enhance the façade´s verticality, the proposed façade design uses single direction spanning glazing units because this does not require transoms.
Apart from engineering aspects such loads, bomb blast, deflections and movements from the roof…building physics that had been taken in consideration during the design development of this glass architecture are: heat loss prevention, light transmittance / reflectance, sun heat gain prevention, glare prevention for building users, noise insulation and weather proofness.”

Regionens Hus, located next to the city’s central station is home to the Västra Götaland Council and is the centrepiece of the largest Swedish city extension of Gothenburg’s modern history. Consisting of two 5-storey volumes alongside a 15-storey tower, there’s a deliberate contrast between the glistening tower with its accompanying lower volumes and the old station house. Approximately 1,300 employees have moved into the building that’s been designed by White Arkitekter with the comfort and productivity of workers in mind; different functions are brought closer together as connectivity is increased, encouraging cross-departmental working. 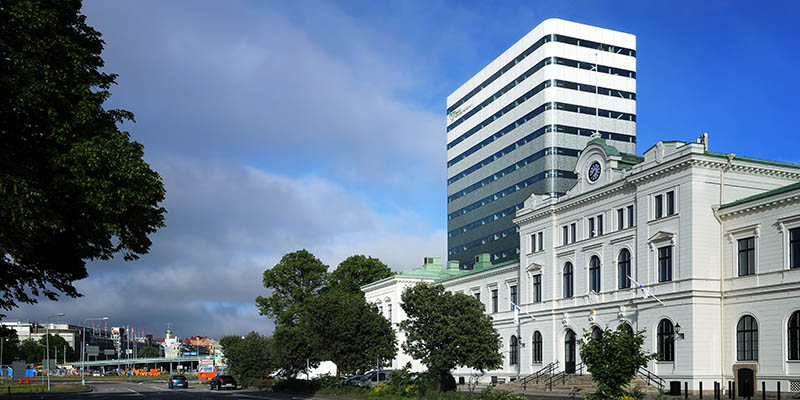 Mattias Lind, Lead Architect at White Arkitekter says “At Regionens Hus, we have developed a glazed façade that enables an energy consumption that’s 50 % lower than the requirements for new construction in Sweden. Glass is easy to work with when prefabricated facades are to be built, and it’s very interesting to work with creatively when advanced energy issues, solar heat loads and aesthetic design grips are to be solved. We searched for a material where we could control a gradient from a dark base to a bright top. With parametric programming, we found a pattern that we could control with great precision. Glass was the material where the gradient had the greatest effect, which determined the choice of material.

At Regionens Hus, the outer layer of the dense breasts is iron-free glass. The dense breast sections carry the screen print in white and green, which makes the façade tinted. For the white parts of the gradient to be perceived shiny white, we have used iron-free glass. In this way, the difference between white and green surfaces will be as large as possible. Both the white and green surfaces have a mother-of-pearl effect, which means that when the sun shines on the façade, the surface has an almost luminous effect.”

An interesting glass architecture currently under completion designed by One Works is the double-glazed façade for one of the buildings forming the Urban Office Campus project (via San Giovanni sul Muro) in Milan.

Pietro Bagnoli, Director at One Works, says ”It represents a sophisticated, discreet, measured, effective and efficient option for adding (or substantially renovating) buildings within contemporary cities with a relevant past. The idea for this renovation project was to generate a sinuous façade, designed to create an interesting relationship with the surrounding context, such as reflecting the existing trees, surrounding urban landscape and the interior private garden.” 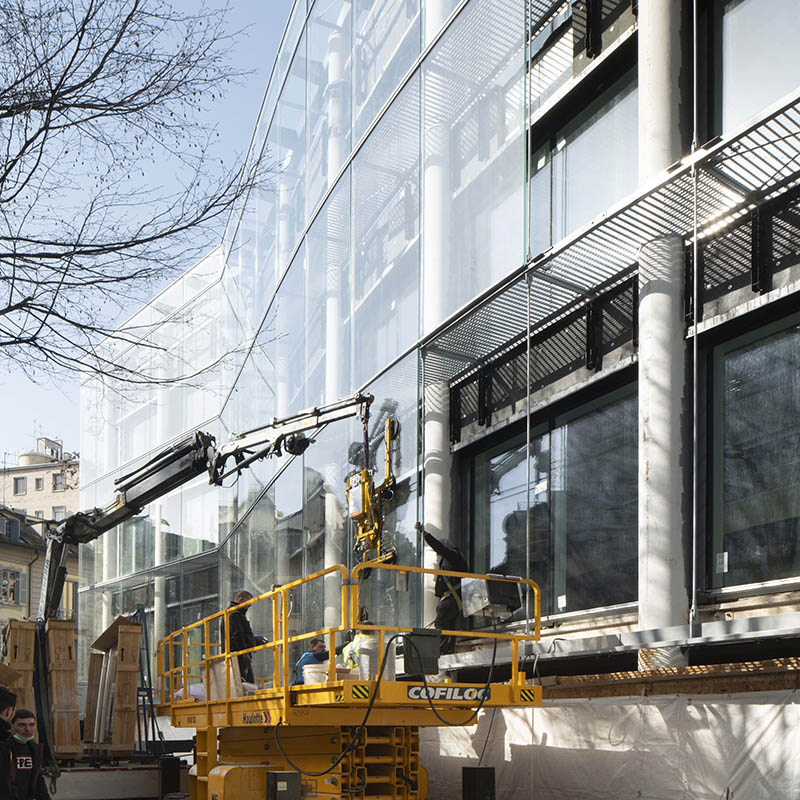 “A curved glazed façade was the natural answer to achieve our intents. Because of its lightness, the reflectiveness and the possibility to establish unique indoor/outdoor relations within precise geometries. In order to obtain an efficient solution in terms of sustainability and energy consumption, we opted for a double-glazed façade. Automated movable louvres placed on the top of the glass façade allow for the circulate of air between the two façade layers during the hot season, while preserving warmer air during the cold season. Budget considerations determined also the decision to use low-iron curved glass for the external skin and a more traditional straight solution for the internal one. Transparency and color neutrality are a big value, clearly perceivable both from the inside and from the outside.”

Cube Berlin designed by 3XN solves solar concerns in unique design with double-skin facade. It is no ordinary glass architecture. Its unique design required careful attention to product selection, ensuring that the right glass product would provide solar control to avoid heat gain/ loss as well as be structurally sound. 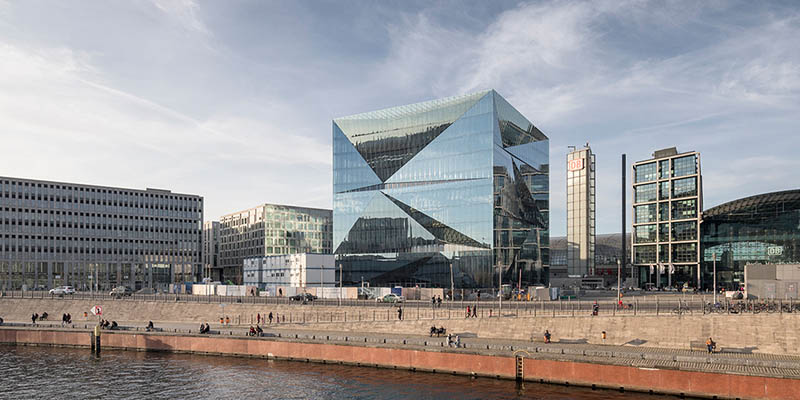 Stephanie Godard, Business Development Manager at Eastman, Advanced Interlayers (Saflex® and Vanceva® PVB interlayers) says “the Cube Berlin double-skin facade uses coatings and PVB interlayers in a unique combination. To address the building owner’s strict energy requirements, Guardian Glass and Eastman selected, tested, and used reflective solar coatings on the outer skin of the glass building while adding a Saflex solar-absorbing PVB interlayer to control solar heat gain in the cavity. (Normally, these products are used on the inner skin.) In essence, the team created a solar-absorbing and solar-reflecting effect in a single laminate.”

Through expert knowledge and rigorous testing and modeling, the team recognized the impact of merging structural and solar PVB technologies.