The building in via Monte Grappa, Milan, was conceived by GBPA Architects according to criteria of energy efficiency and environmental sustainability. All aspects of the project system (shell, MEP, lighting, architecture) have high levels of efficiency and integration. It is located in the immediate vicinity of the new Porta Nuova business centre, and is an iconic building from the 1970s.

This LEED certified building is part of our Fuorisalone 2022 itinerary. 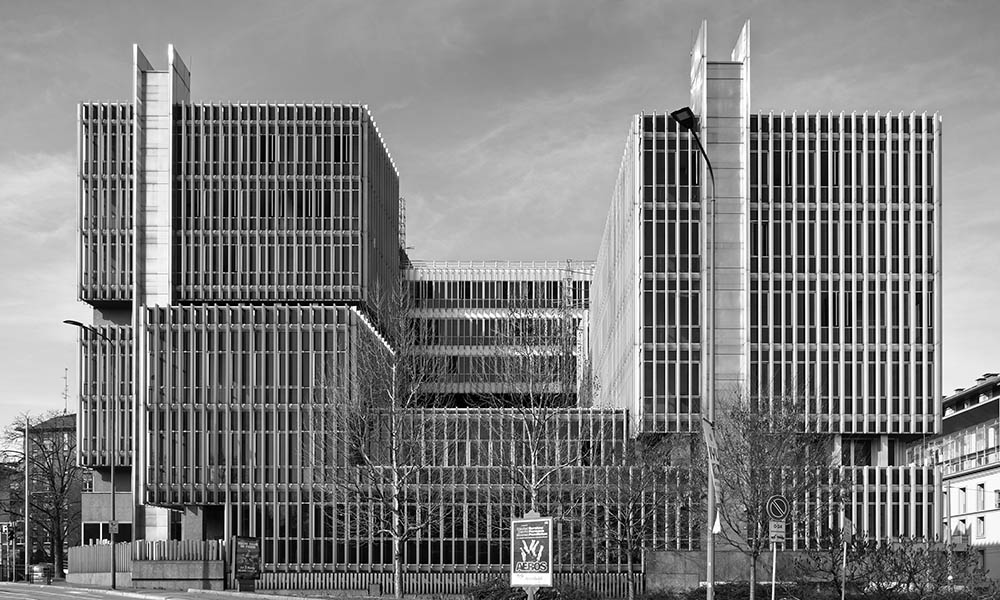 The building is able to limit its impact on the environment and has been designed with the aim to reduce energy consumption by using renewable sources, reducing water consumption, using materials with specific characteristics and origin, paying attention to the life cycle of the building and its components, aiming at the welfare of its occupants and social sustainability. 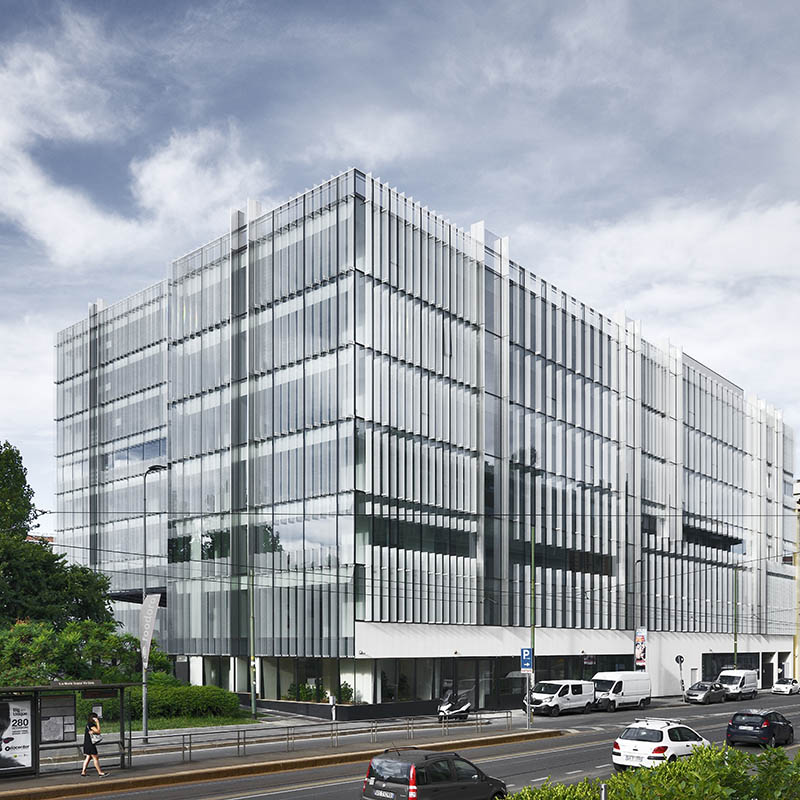 GBPA Architects is led by architects Antonio Gioli and Federica De Leva, who describe the building as follows: “Between the original project and the redevelopment project, we wanted to maintain a relationship of continuity between the past and the present at the compositional, material and chromatic levels, resulting in a modern, open, innovative and high-performance building that meets the expectations of today’s market”.

Formerly the headquarters of Tecnimont, it was recognisable by its unusual shell of anodised aluminium and glass, designed at the time to celebrate the company’s technical construction skills. The building is now the Italian headquarters of Amazon.

In continuity with the building’s original image, it was decided to remodel the outer shell with a new glass façade, characterised by sunshades, also made of glass, which not only increases the permeability and luminosity of the rooms, strengthening the relationship between the exterior and interior of the building, but also and above all giving the building the same strong identity that has always distinguished it.

The project also included the partial demolition of one of the fronts and the consequent creation of a new important and scenic access to the building through an internal square, covered by a large canopy and characterised by green furnishing elements.

“Our first big challenge was certainly at the conceptual level,” continue the GBPA Architects partners. “How could we tackle the total renovation of an iconic building that is strongly representative of the Milanese reality, perceived as an “urban object that has always been there”? We answered this question with an innovative project with a strong aesthetic impact, which nevertheless maintains an approach that respects its history”. 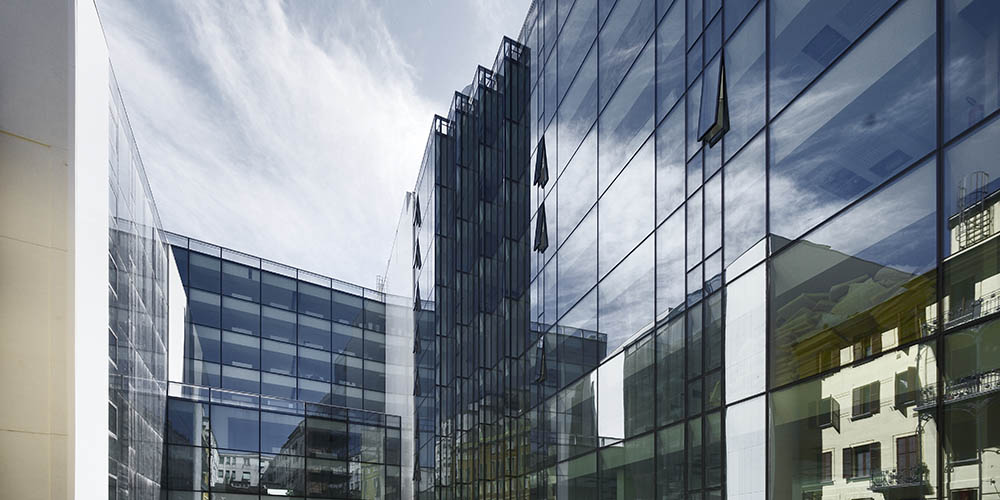 In fact, there were many design and technical challenges that GBPA Architects had to face: “We worked on a building that was originally closed in on itself from a planimetric and distributional point of view.

The building showed all the typical elements of the historical context in which it was born: a large number of parcelled and watertight areas with limited possibilities of communication, a series of inefficiencies in the position of services and installations, difficult access to the building, and – of course – the tight and occlusive rhythm of the aluminium sunshades on the façade which prevented a healthy relationship between inside and outside”. 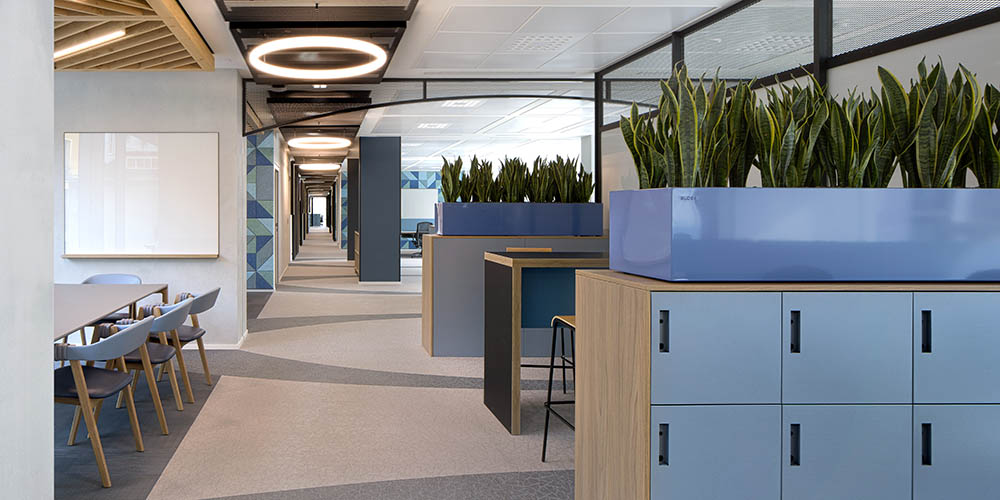 To respond to these critical issues, the architects based their design on the concepts of perceptual and physical permeability of spaces: “We proposed a layout that would encourage people to meet and communicate through the repositioning of vertical connections, the sharing of paths, the creation of open spaces and informal spaces, completed by a large green roof that can be used by the building’s occupants. As far as the façade is concerned, we decided to preserve the architectural element of the sunshade (a feature that strongly characterised the existing building), but replacing the aluminium with glass which, while maintaining the screening function, guarantees great transparency and luminosity. All this is to the great advantage of improving the liveability of the workplaces”.

Moreover, the new urban context directly influenced the new design. In fact, in the seventies, the building stood on an area surrounded by high traffic roads; fifty years later the situation has radically changed, thanks to the urban redevelopment of the Garibaldi/Corso Como axis, which is now mainly pedestrianised.

GBPA Architects responded to this new context with the partial demolition of one of the fronts, giving rise to an internal square, covered by a large glass roof and characterised by furnishings and green areas, which is now the new entrance to the building and generates continuity between the interior and exterior.

The building has been awarded LEED Platinum certification for its energy efficiency and environmental sustainability features. 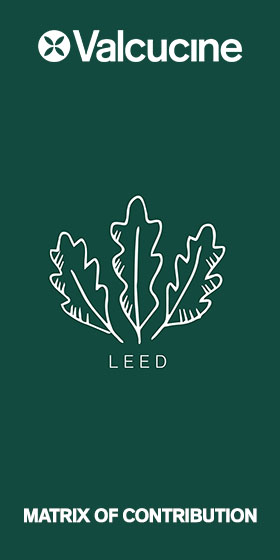