The most popular architecture firms on LinkedIn

The most popular architecture firms on LinkedIn

As we did last year with Facebook, we’re now going to break down the most popular architecture firms on LinkedIn.

Social media are of course very different with peculiar goals, but can we really say that their social media pages work differently when we are talking about followers and engagements? The approach, the language, and the reasons should be different, but people express their passions and vibes in the same way on every social media.

Two of the most well-known indicators (KPIs = key performance indexes) are “number of fans” and “engagement“.
While, on Facebook and Instagram, these two indicators can be influenced by promotions (for a handful of small changes actually) and twisted by not very clear growth strategies (buying likes and followers…ups!) on LinkedIn such behaviour is more difficult and expensive.

We analyzed more than 200 LinkedIn accounts of the largest architecture firms in the world. What catches the eye is two American companies are definitely leading the ranking and doing the lion’s share.

At the third place of the podium, with half of the fans compared to the previous ones, Atkins, a British multinational engineering, design, planning, architectural design, project management and consulting services company headquartered in London founded in 1938 by Sir William Atkins.

Amongst the most popular architecture firms on Linkedin, the most active one is the 12th most popular: Sweco with 141 posts (only in January 2020). The Swedish architecture firm is followed by a very detached handful of pursuers from every part of the World such as the English Stantec, the American HOK, and the Australian GHD.

If instead we consider the engagement rate of the largest firms on LinkedIn, rankings and values are completely different: Cox Architecture (37th in the global ranking) with an engagement rate of 0,31% ranks first. HOK (9th) ranks second and HKS (23rd) with Ateliers Jean Nouvel (24th) and Zaha Hadid Architects (4th) rank third.

The most liked post on LinkedIn amongst these architecture firms in 2019 is by Zaha Hadid Architects and is the video presentation of Beijing Daxing International Airport with more than 11.000 likes, 406 comments, and 227.000 views. 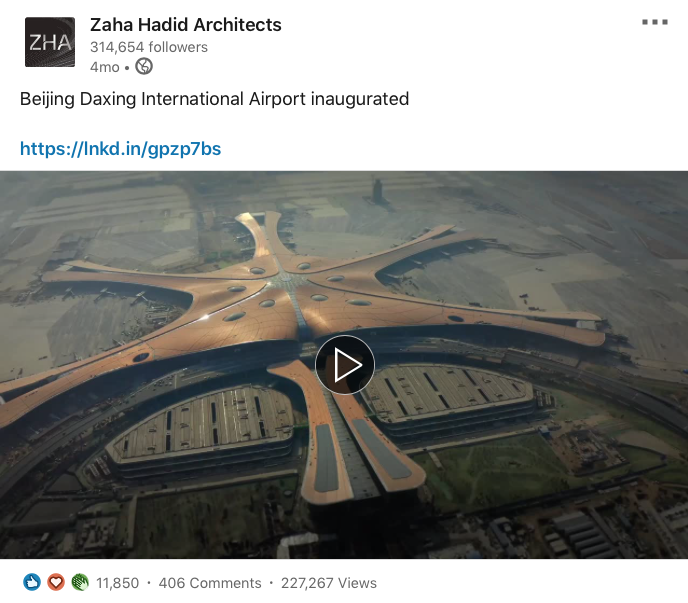 Therefore considering the previous indicators, in terms of likes, engagement and dimensions we can say that Zaha Hadid Architects is the most successful and influential architecture firm on LinkedIn.

Are you courious about our best of?
Here below you can find all our other “best architecture firms in…”