Located inside the Bilbao Intermodal Station designed by IA+B the building includes also a hotel and various retail premises.

The project started previously when the Greystar Group – Resa, leader company specialized in student accommodations, commissioned Masquespacio to develop the visual strategy for their future residences with the aim to obtain a uniform aesthetic for the new openings. After developing the brand manual Resa requested Masquespacio to design their second venue in Bilbao (Basque Country, Spain).

Christophe Penasse, co-founder from Masquespacio: “During the development phase of the brand manual next to the definition of the visual strategy we sought to establish the essence of Resa’s residences. During this investigation it was clear that it was important to augment the possibilities for the students to share experiences as a ‘community’ in this new space.” 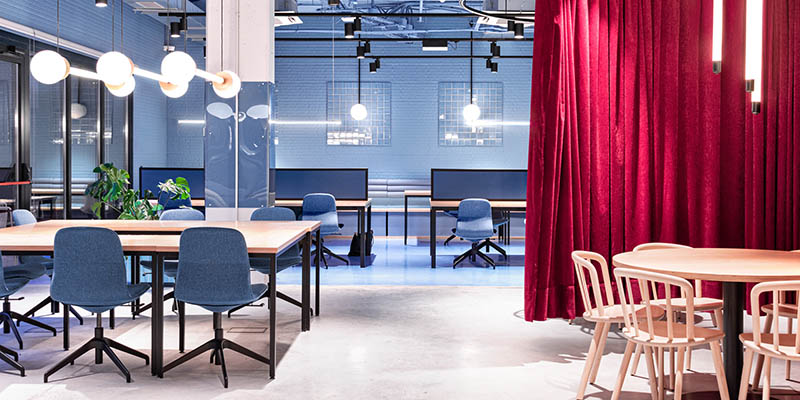 Hereby a diaphanous layout was created in which the different zones are connected between each other.

Above some zones like the study rooms include flexible glass walls that can be closed to maintain the room in silence or organize events unrelated to the other spaces in any given moment.

Concerning the design, the project started with a clear definition to search for creative solutions that could adapt to a limited budget.

For this reason, Masquespacio got involved at the early construction phase of the building, selecting the finishes for the walls like the original bricks and concrete floors supplied by Gerflor to avoid the installation of additional materials, next to the decision to maintain all the pipes visible. 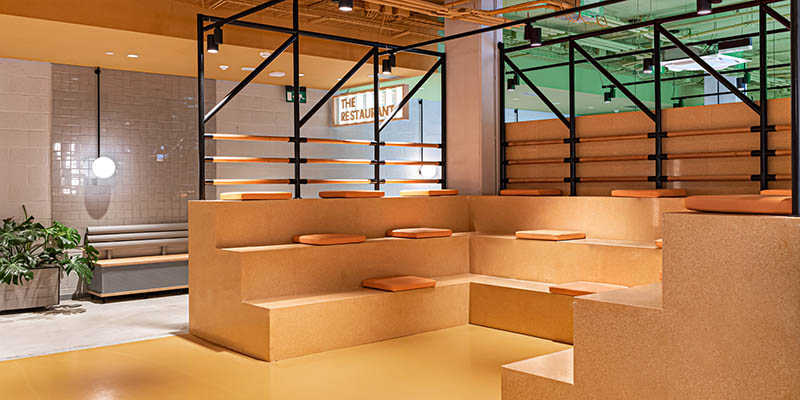 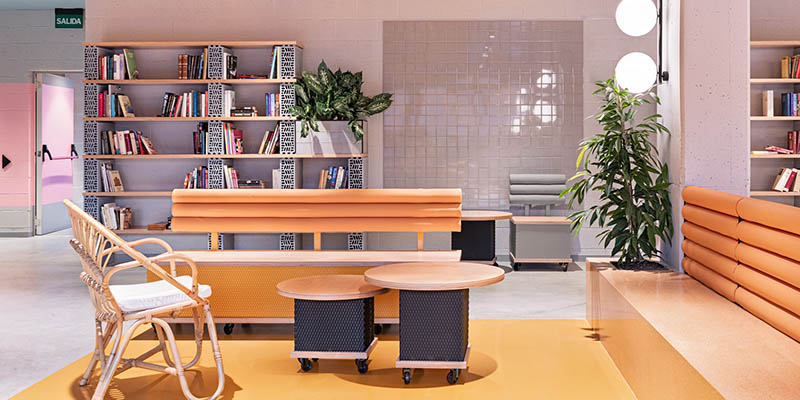 This way a contemporary and industrial look was created with a touch of color that transforms Residence Resa San Mamés in a vivid and joyful place.

Ana Hernández, creative director from Masquespacio: “Using the technique of color blocking we obtained a strong visual impact for the space and at the same time we could create a clear distinction between each zone in this open space.” 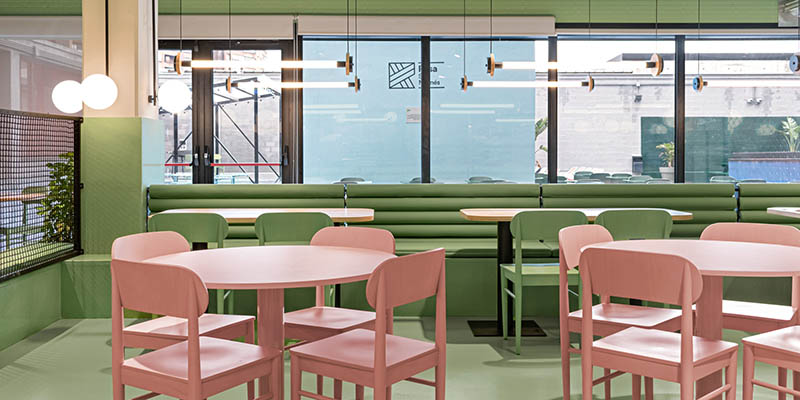 Last, to be highlighted, is the design for the University Residence Resa San Mamés terrace, the color blocking was used again both for the flooring and the walls as well as on the furniture to create the same strong visual impact for the outside. 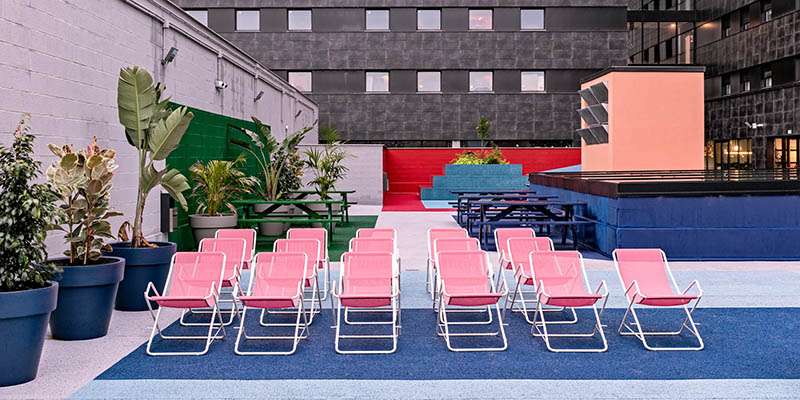 Some furniture and lightings have been designed directly by Masquespacio and manufactured by Inmodeco other furnishings have been supplied by Beliani, Fatboy, Pedrali, Sancal, Masferreteria and TM Sillerías.

Welcome to ARCHIVIBE Your personal data (address or phone number, your user ID and password, e-mail address) are collected and processed by ARCHIVIBE for purposes strictly related to the proper use of the website and its information services, with information also provided by third-party advertisers. Your personal information may also be used in other processing operations, however, in a manner in line with these purposes. Your personal data is processed electronically and will be stored in a way that allows you to be identified for the time strictly necessary for the purpose for which the data was collected and subsequently processed and, in any case, within the limits of the law. To ensure that your personal information is always correct and up-to-date, relevant and complete, please inform us of any changes at: [email protected] Your personal information will not be disclosed to third parties for purposes not permitted by law or without your explicit consent. While using and browsing on our websites, some personal information may be collected automatically (by means of so-called "Cookie"), like, for example, the collection of the user's IP address and other information relating to browsing the website or the user's preferences expressed when choosing the services offered by the site. This information and data are collected directly and automatically by the web site and as part of its operational functions. Cookies serve different purposes. Cookies allow a site, for example, to: - Remember your login information - Offer you safe browsing after a login - Optimise the website performance by reducing the loading times of the pages you visit - Improve the user experience - Ensure a consistent appearance to the site - Remember the list of your favourite products - Remember the contents of your shopping cart - Remember the order at the moment of your arrival on the site - Allows you to use the "share" and "like" features - Send information to other websites for the personalisation of their advertisements Besides the cookies installed by the site, we use some third-party services that use external cookies. The purposes for which information is collected by these cookies are divided into the following types: > Analytical purposes, i.e. cooking serving to collect statistical information on the traffic and service use by the users, for example, how many visitors visited the site in a given period of time, which pages were visited, the duration of the visit etc.. This information is collected anonymously, and is not connected in any way with the personally identifiable information of the users who have visited the site. For this type of monitoring, we use the following third-party services: Google Analytics > Social sharing purposes. Some social networks may activate cookies for the proper functioning of their content sharing services. For example, when a site page contains a "share" or "like" button, the selected social channel establishes a direct connection to the site. The transmission of data to social networks is governed by the privacy policies and by the terms of use of the cookies of these companies, to which reference should be made for further information. Below is the list of social media networks used on the site: Facebook, LinkedIn, Instagram
<link rel='stylesheet' id='fb-min-3c-max-4c-css' href='https://www.archivibe.com/wp-content/plugins/fusion-builder/assets/css/media/min-3c-max-4c.css?ver=3.2.1' type='text/cs