Estudio Vilablanch, founded in 1999 in Barcelona by architect Elina Vilá and interior designer Agnès Blanch, and TDB Arquitectura, founded by Juan Trias de Bes in 1992, teamed up to preserve and restore Casa Burés.

Casa Burés was built between 1900 and 1905 by Francesc Berenguer i Mestres, a Catalan Modernista (Art Nouveau) architect and close collaborator of Antoni Gaudí. The building was named after its first owner, Francesc Burés, a businessman with one of Spain’s most successful textile companies.

The building has 7.700 square meters distributed over six floors. In 1979, Casa Burés acquired a heritage listing enjoying the highest protection category by the Catalan regional government. 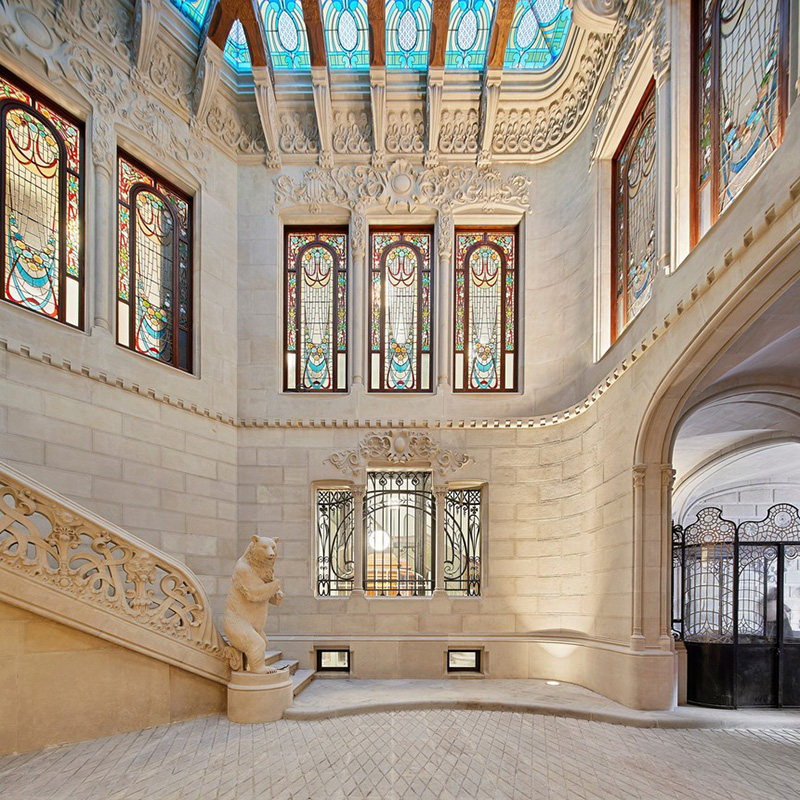 Despite this, the building fell into decline, after three years of careful restoration Casa Burés has emerged as one of the most representative Modernist-style buildings in Barcelona. The modernist architectural and interior original elements were respected and restored because of both regulatory requirements and a high sensibility of all the stakeholders: developer, city authorities, project team, and the artisans and restoration experts involved in the works.

The interior design project of Casa Burés by Estudio Vilablanch and TDB Arquitectura has been commissioned by Bonavista Developments, a real estate development company that exclusively offers luxury properties in Barcelona.

Estudio Vilablanch and TDB Arquitectura had to recover and revitalize the building’s original decorative elements and to adapt the housing to contemporary regulatory and functional needs in terms of distribution, technology, safety, accessibility, comfort and community. 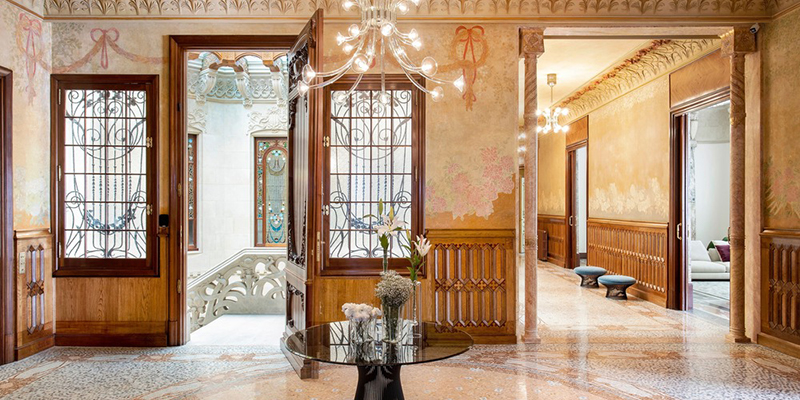 The challenge behind the assignment was the transformation of a historical and listed building of Barcelona into 26 exclusive residences with high-quality common areas, while preserving its original rich heritage. Casa Burès had the typical layout of the homes of that period: spaces for retail and industrial use on the ground and lower ground floors (1), a palatial first floor apartment (2) and smaller upper floor apartments for tenants and servants (3).

The ground floor and the basement were originally used for Burés textile industry. They did not have a modernist decoration, but a strong industrial personality. The new interior concept recovered this industrial character: big open spaces with high ceilings, concrete floors, iron columns and old brick walls were left uncovered, kitchens and furniture that strengthen the industrial character… 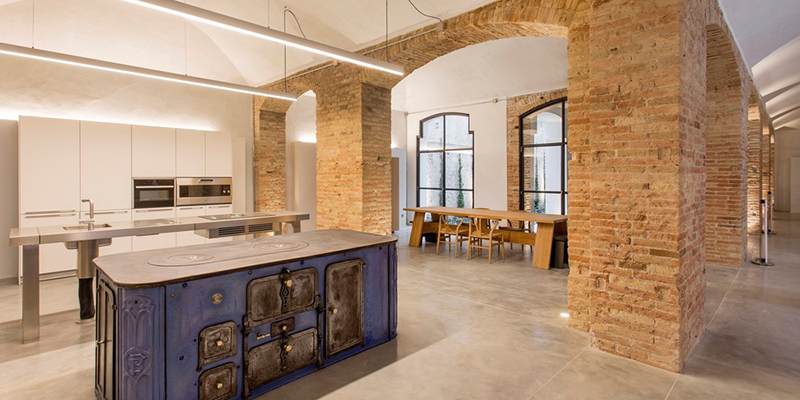 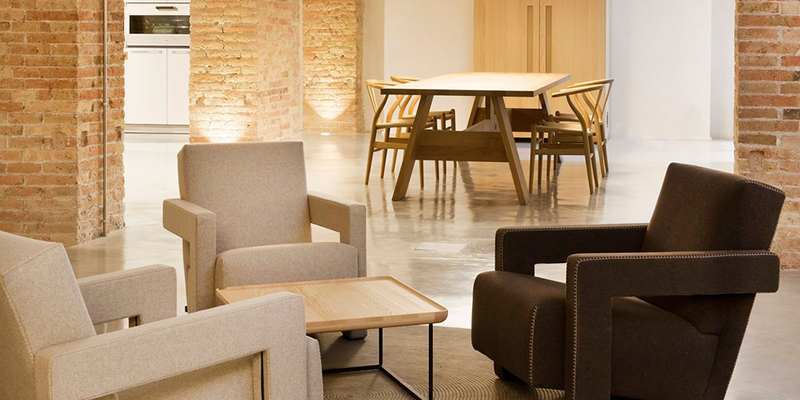 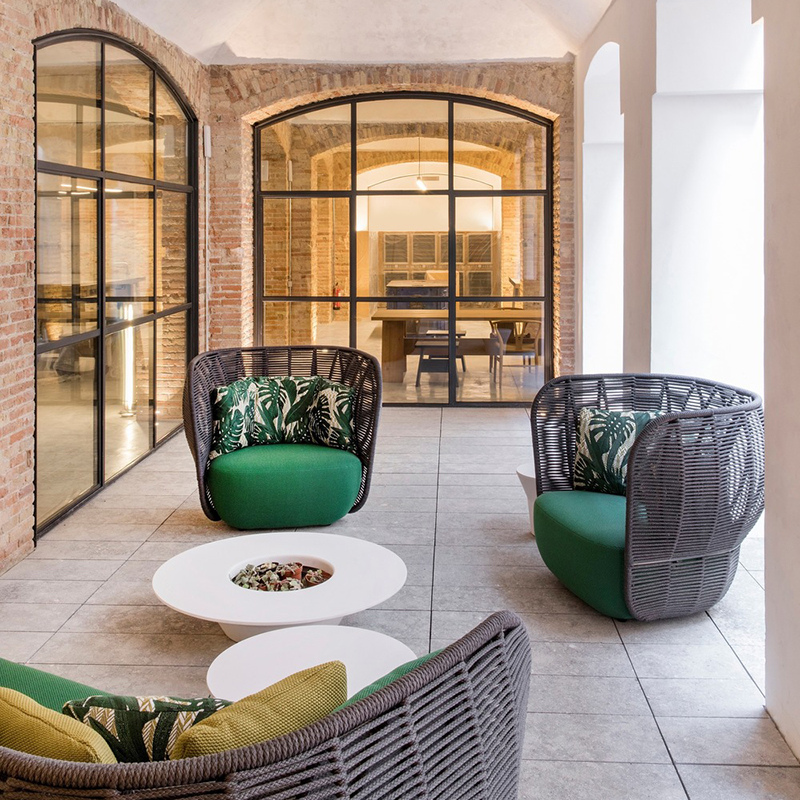 The ground floor was transformed into three lofts and the basement into amenity areas for community use (a swimming pool, a spa, a gym, a cellar, an open kitchen, a terrace, spaces for social events…), recovering their original industrial aesthetics featuring interior design products from the most renowned brands worldwide such as Living Divani, B&B Italia, Cassina, Porro, Cappellini, e15, Vitra, Moooi, Brokis and Flos. 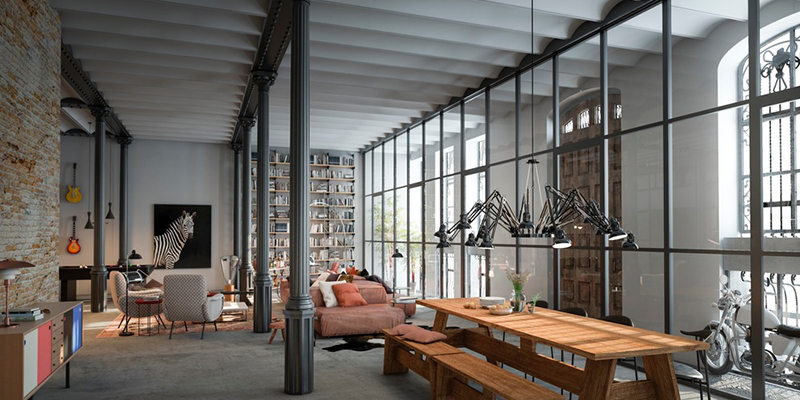 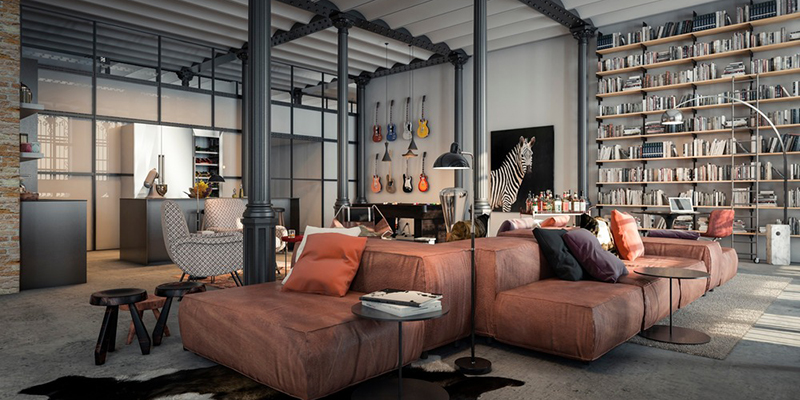 The original Burés palacelike residence, located on the main floor, was split into two 500 square meters magnificent flats. Being the richest floor in terms of decorative modernist elements, all of them were carefully restored into the noblest flats (mosaics and marquetry in pavements, stained-glass windows, frescoed walls and ceilings, wooden decorative elements, ceilings with reliefs…) 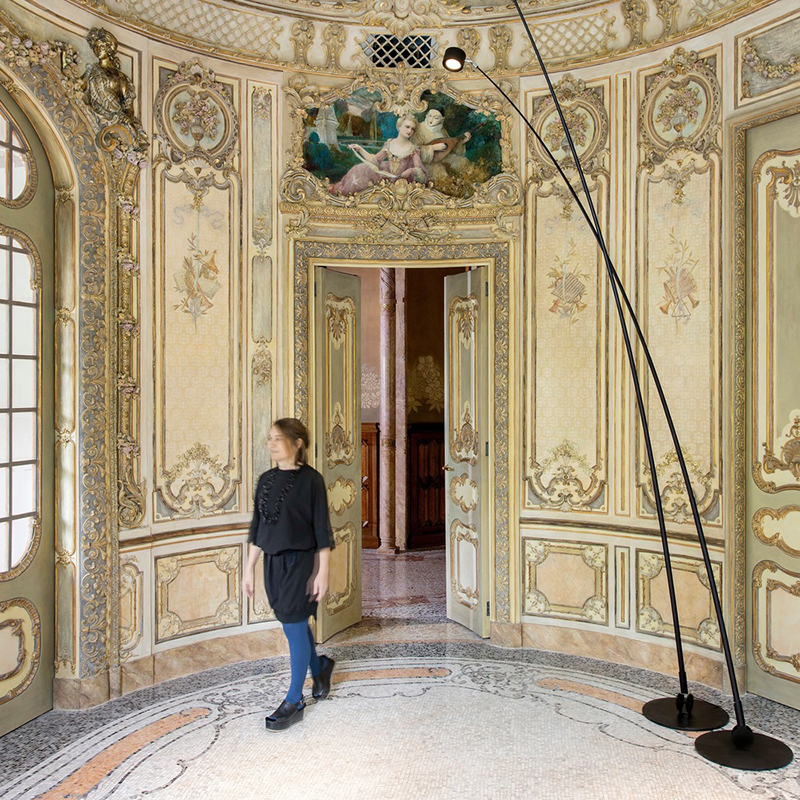 The original elements were restored, while new materials were added when needed. The new materials and furniture pieces were equally refined but silent, not very ornate, light and with colors in harmony with the space, in order to highlight the valuable historic elements and not compete neither imitate them, facilitating a silent integration in the space.

Flats located in the upper floors, originally conceived for rent, were transformed into 16 apartments and 5 attics. These 21 residences combine strong original modernist spaces with more contemporary ones. The old elements were found in the spaces located in the crown of the building that faces the façade; these original elements were restored. 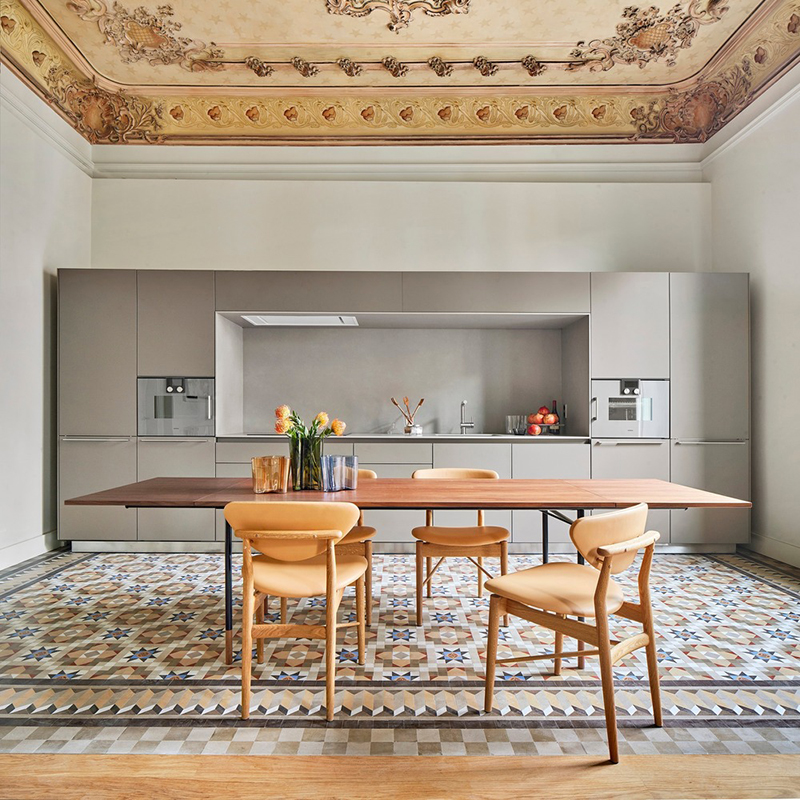 In the interior areas of the flats, where the original elements didn’t exist or couldn’t be preserved, the decision was to incorporate new materials that would allow the contrast between old and new ones: white color and oak wood were added as main elements in order not to compete, but to highlight and contrast the original decorative elements. This area of the house features products from Cassina, Living Divani, House of Finn Juhl, Molteni, De la Espada, Moooi, Serge Mouille, Tato, bulthaup, Antonio Lupi. 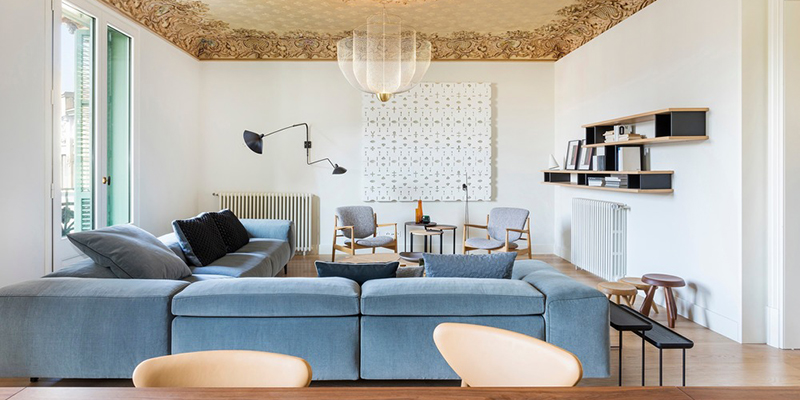 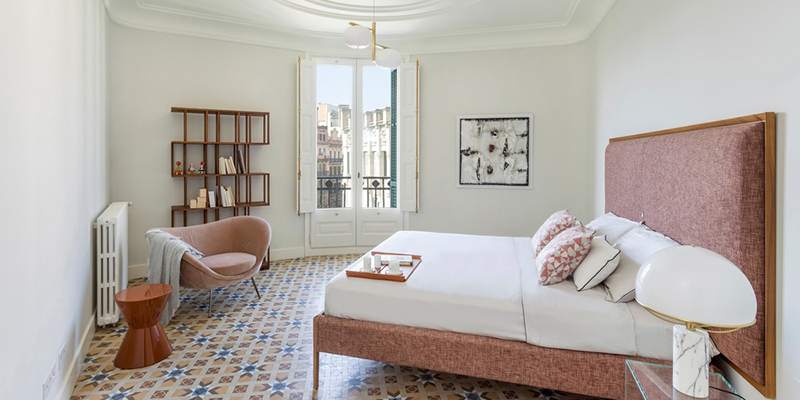