In its fifteenth year, London Design Festival 2017 will be returning to venues and institutions across the city between the 16-24 September. A major feature of the London Design Festival 2017 is an ambitious programme of over 450 projects and events, offering Londoners, architects, interior designers, design professionals and visitors to the city an opportunity to experience world-class, innovative, and challenging design across the capital.

Established in 2003 by Sir John Sorrell CBE and Ben Evans, London Design Festival has since earned the reputation as a key calendar moment of London’s autumn creative season, alongside London Fashion Week, Frieze Art Fair and the London Film Festival, attracting the greatest thinkers, practitioners, retailers and educators to the capital, in a citywide celebration.

Here you can find our event selection.

SET IN STONE THE DESIGN MUSEUM

The Design Museum, which opened the doors to its new home in Kensington in November 2016, presents an exciting project during London Design Festival 2017.

Set in Stone presents a selection of works by eight designers invited to explore the potential of marble and limestone. These works, displayed in various locations both inside and outside the museum, include objects intended for public use, such as seating by Eduardo Souto de Moura; a slide by Elemental; graphic pieces by Sagmeister & Walsh; and a series of domestic objects by Michael Anastassiades and Jasper Morrison. 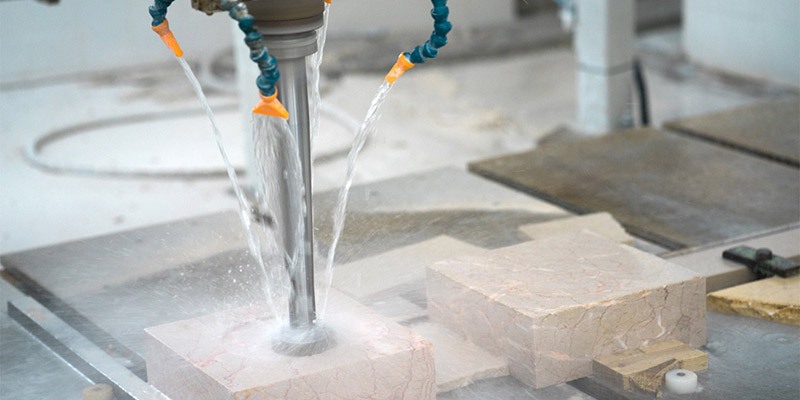 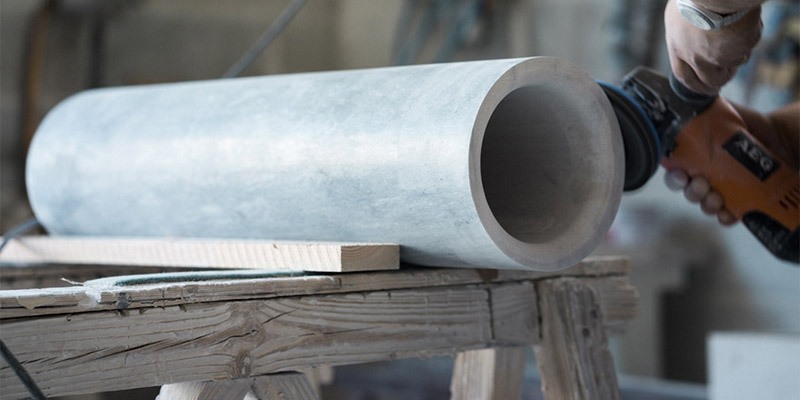 The project is an investigation of the qualities of stone, and the technical means through which it is cut and shaped. The natural formation of stone over millions of years produces patterns and textures that are unique and unrepeatable. The designers’ responses represent small moments of monumentality that re ect the solidity and permanence of an elemental material. Originally conceived by the Portuguese curator, Guta Moura Guedes, the project has spanned more than two years and includes the work of 24 international architects and designers.

“The way we treat the material is a primal operation: subtracting not adding, as it was done with the first human tools” says Alejandro Aravena, Executive Director of Elemental. “However, this is not a nostalgic treatment, the method of carving the stone was only possible through using state-of-the-art technologies. It takes a lot of knowledge to be simple.”

Alex Newson, Senior Curator, the Design Museum explains: “Stone is such a fascinating material and I am thrilled to be bringing this project to the Design Museum during London Design Festival 2017. Stone belongs to a handful of materials that have been used since the dawn of civilisation. From hand tools to aqueducts, and from cathedrals to decorative friezes, it has been essential to how humanity has constructed and re-de ned the world. It has a permanence and monumentality that deserve respect. Unlike more ephemeral materials, stone and marble can take millennia to form, and any use of it must take that into account. In di erent ways, all the works on display in the museum have responded to the material’s unique properties.”

designjunction returns to the spectacular King’s Cross site in September (21-24 September) for this year’s annual London Design Festival. Following the success of the 2016 edition, which attracted 27,000 visitors over five days, designjunction will expand across new King’s Cross locations for its flagship London show. 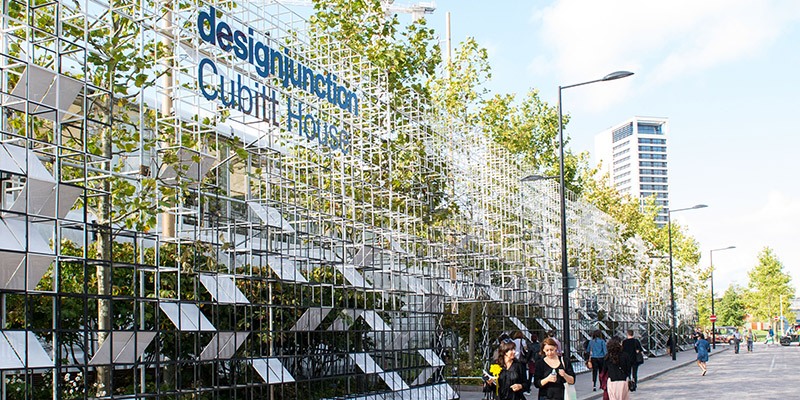 Taking place across five destinations including Cubitt House and Cubitt Park, The Canopy, Granary Square and The Crossing – a mix of global furniture, lighting, accessory, material and technology brands will exhibit alongside pop-up shops, installations and interactive features.

designjunction presents more than 200 of the world’s most iconic design brands to the world’s leading design professionals. It’s a junction connecting the industry – a place to meet, do business and be inspired.

A major feature of the London Design Festival each year is the ambitious and exceptional programme of Landmark Projects.  In collaboration with our supporters and partners, we have commissioned the world’s best designers and architects, as well as pioneering new talents, to create something extraordinary in response to a variety of stimuli, such as material, theme or location. Since 2007, our Landmark Projects have been installed across London; from Greenwich Peninsula to Trafalgar Square.

LONDON DESIGN FESTIVAL 2017 AT THE V&A

A unique collaboration between the world’s leading museum of art, design and performance and London’s foremost contemporary design festival. Over the past nine years, London Design Festival at the V&A has gone from strength to strength. This year’s programme once again fills the museum with an extraordinary range of design installations large and small, intricate and majestic as:

Transmission: a 21.3 meters long fluid sculpture of folded material. Presented by Alcantara®, Ross Lovegrove’s installation is an intuitive and evocative response towards the immersive physical atmosphere of the V&A’s tapestry room. 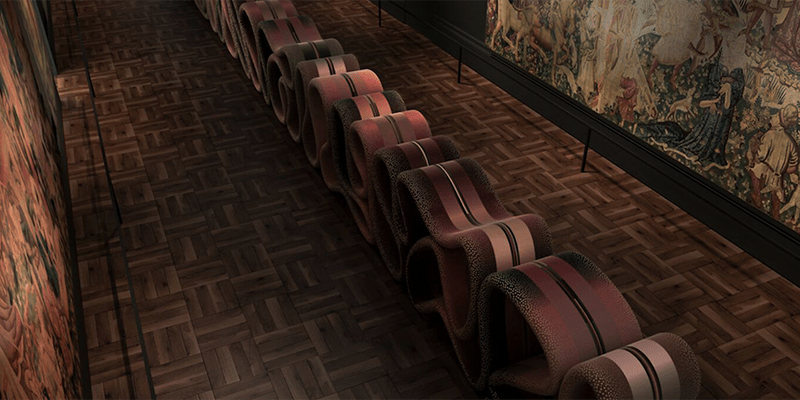 Reflection Room, by designer Flynn Talbot: an immersive coloured light experience that will be the first London Design Festival installation to be housed in the Prince Consort Gallery. 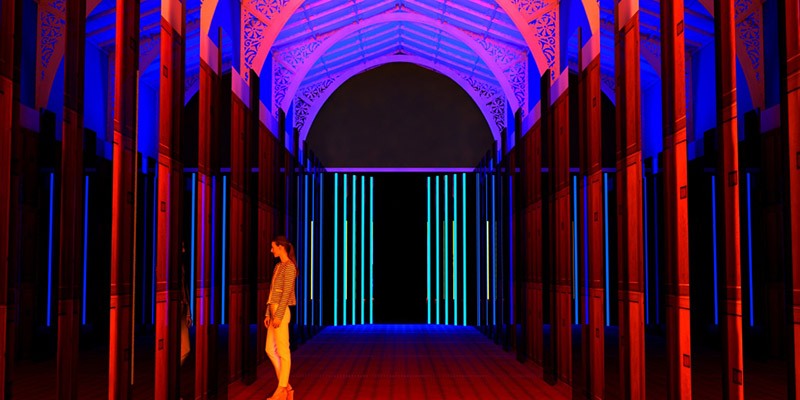 DROP IN THE OCEAN BRODIE NEILL ME LONDON 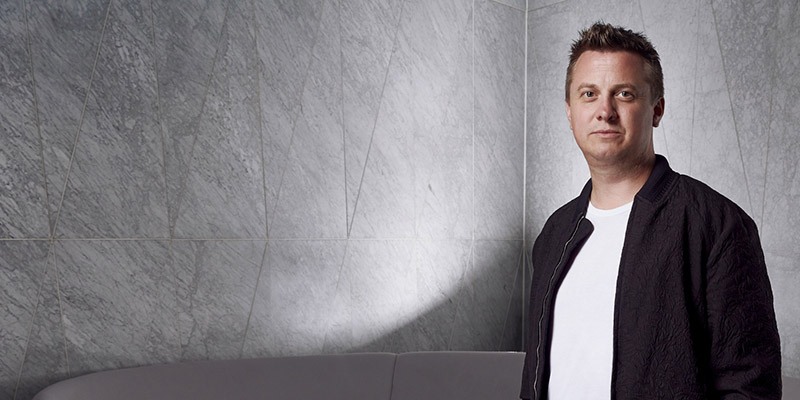 Designer Brodie Neill said, “The installation is a continuation of my work drawing attention to the global issue of ocean pollution through contemporary design, and upcycling waste streams to create innovative materials. Exactly a year ago whilst standing in the nine-storey prism-like atrium at ME London, I was inspired to create an installation which used both the unique height of the space and the state-of- the-art video projectors. Drop in the Ocean is a multi-sensory display triggered from the power of a single drop of falling water magnifying into a roaring ocean wave.”

Cast completely as singular pieces, the Flotsam collection is created from a combination of all-white Ocean Terrazzo to reflect water and multicoloured ocean plastic fragments to reference the oating nature of the plastic waste which travels across oceans and break down into small fragments from the force of the currents, meanwhile the single drop seen in the melodic installation symbolises the smallest essence of nature resulting in momentous consequences.