The Civic and Community – Completed Building category was won by Eriksson Furunes + Leandro V. Locsin Partners for their Streetlight Tagpuro project in the Philippines. Alexander Eriksson Furunes was invited back together with his two partners Sudarshan Khadka and Jago Boase to rebuild the NGO Streetlight’s office, orphanage and study centre after the original premises were devastated by a Typhoon in 2013. 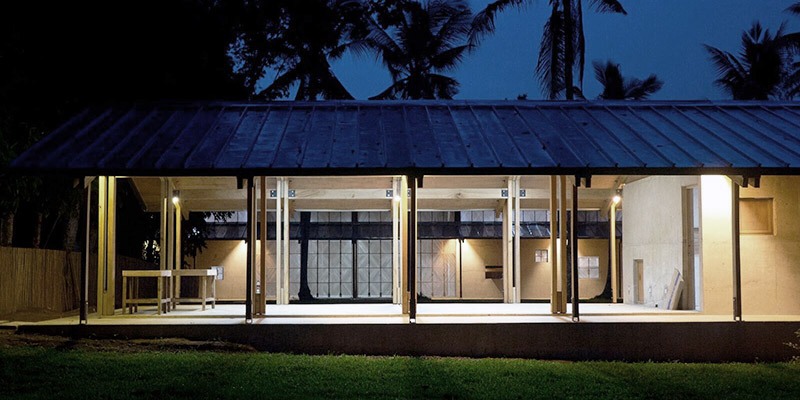 A floating museum in Nicosia, Cyprus designed by Pilbrow & Partners has won the Future Project award in the Competition Entries category. The architects conceived the museum as a floating deck set atop a hill offering views and protecting the archeological site below.The elevated deck and concrete veranda enable a dialogue with the archeological remains below and the judges praised the versatility and simplicity of the design.

Culture – Completed Buildings category was won by Heneghan Peng Architects’ Palestinian museum. This limestone clad museum is situated on the campus of Beret University, near Ramallah on the West Bank. The judging panel commended Heneghan Peng for “working with the contours of Palestine. Described as a “fragile terrain”, the architects have made a museum without a collection. Like the place and culture where it is situated, this building will define its purpose over time”. 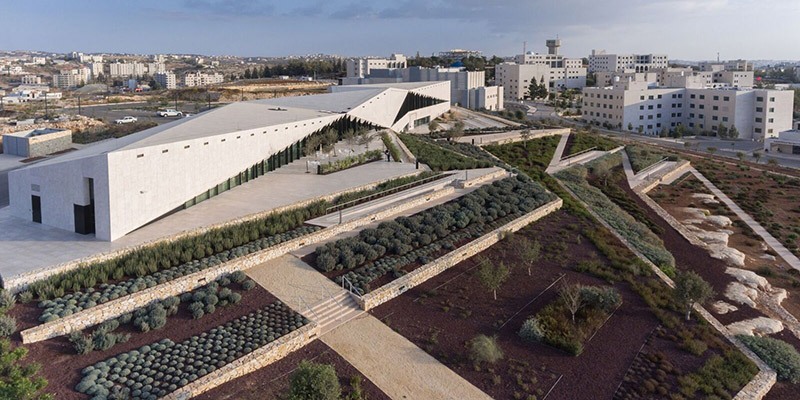 Alison Brooks Architects’ landmark installation, The Smile, won the Display – Completed Buildings Display category. Designed as a temporary installation for the London Design Festival, the judges described The Smile as a small build with a big impact, a simple and powerful concept which overcomes big technical challenges to deliver a delightful installation. 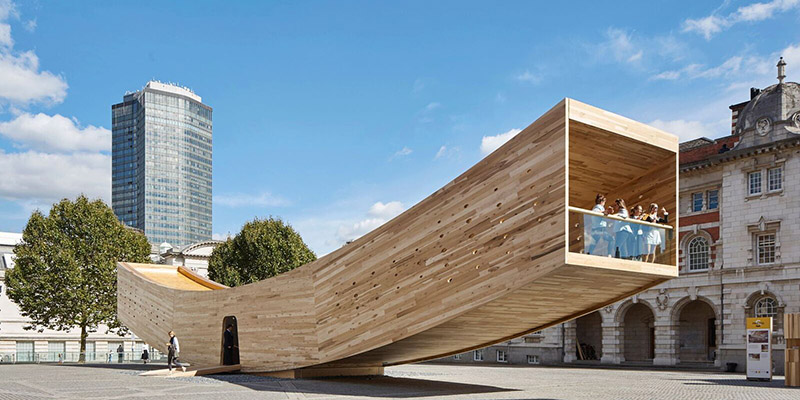 The Future Projects – Experimental category was claimed by 3deluxe Transdisciplinary Design for Sharjah Observatory. Located on the edge of Mleiha National Desert Park in the UAE, this project was designed to withstand extreme weather conditions and reinterprets the geometry of a local rock.

Magi Design Studio won Health – Future Projects category for their Desa Semester philanthropic rehabilitation centre focusing on the final stage of full mental health recovery. According to the judges the Indonesian practice’s architecture shows a strong sense of social and environmental responsibility, with the existing terrain and trees being preserved without compromising the architecture. The centre is accessible via a perforated bridge.

The Civic – Future Projects category winner was Consulate Building, Staff Housing and School complex, in Karachi, Pakistan by edgeARCH. Judges praised the practice for the project’s “clear conceptual logic and civic presence”, commenting that it “will hopefully act as a paradigm for a new and more enlightened consular typology.”

Superlofts Houthaven in Amsterdam by Dutch practice Mark Koehler Architects is this year’s winner of the Housing – Completed Buildings category Supported by GROHE. Engaging residents was a key aspect of this scheme which is a new co-housing concept developed by Mark Koehler Architects creating a global network of local building co-operatives. 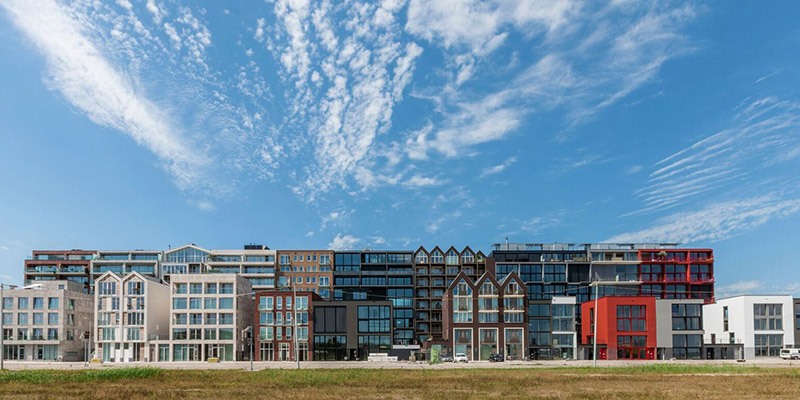 Sanjay Puri Architects were heralded winners of The Infrastructure – Future Project category Sanjay for The Bridge, India. Judges were impressed with the approach to local tradition of brick making, expressed in this project in a very contemporary way.

Bodrum Loft, by Tabanlioglu Architects claimed the prize for the Leisure-led Development – Future Projects category.  The judges commended the architects’ understanding of the challenging site and historical context. The design minimises the building’s footprint through the careful arrangement of social and private spaces.

The post-earthquake reconstruction of Guangmine village by the China University of Hong Kong won the New & Old – Completed Buildings Category. The judges were impressed by the project’s huge ambition to offer extraordinary hope and promise to disaster communities. 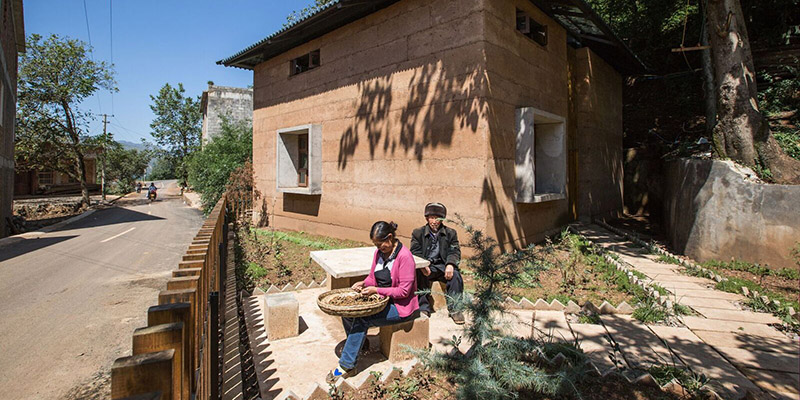 Office – Completed Buildings was awarded to Nikken Sekkei for its Co-op Kyosai Plaza, Tokyo. Located in Tokyo, judges said the building “demonstrates many exemplary innovations. Motivated by climate change and environmental responsibility, the building represents a holistic response from planning down to final details.”

Vietnamese Vo Trong Nghia Architects claimed the Office – Future Projects category with their Viettel Offsite Studio. The Vietnamese Communication Group’s new studio is located on a slight slope between a lake and treelined landscape on the outskirts of Hanoi.  The six V-shaped wall-blocks which were freely arranged follow the lay of land and are connected by an open corridor. They won even the House – Completed Buildings award for Binh House in Ho Chi Minh City, Vietnam. The house serves as a multigenerational family home and sets a new benchmark for dense urban living. Architecturally the house draws on a strong modernist tradition. 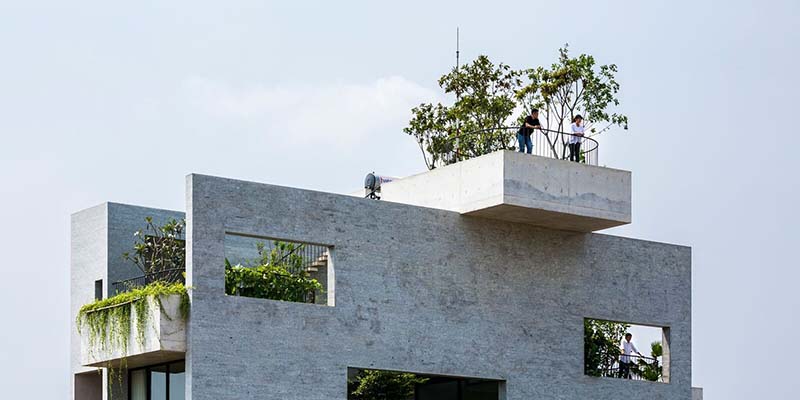 Production, Energy & Recycling – Completed Buildings category was awarded to Slash Architects and Arkizon Architects  for The Farm of 38° 30°. The simple and sophisticated design, detailing and execution was deemed to be “beautifully expressed” by judges, who commended the Turkish project for “public and private experiences that are very well integrated.” 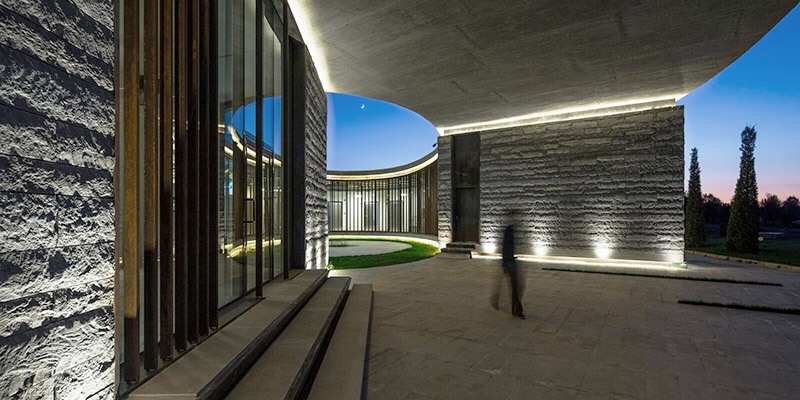 Winner of the School – Completed Buildings category is Andrew Burges Architects, for their East Sydney Early Learning Centre: an adaptive re-use of an existing 1920s industrial building which houses both a childcare and community centre.  The judges described the project as an incredibly creative and well resolved rehabilitation building creating a mini city within an existing structure.

U.S. Bank Stadium, Minneapolis by HKS Architects was heralded winner of the Sport -Completed Buildings category and sets the precedent for large scale sport stadiums. This project provides a great venue for sporting and cultural events, while also offering plazas, parks and an observation platform connecting with the surrounding urban environment and which can be used all year-round. 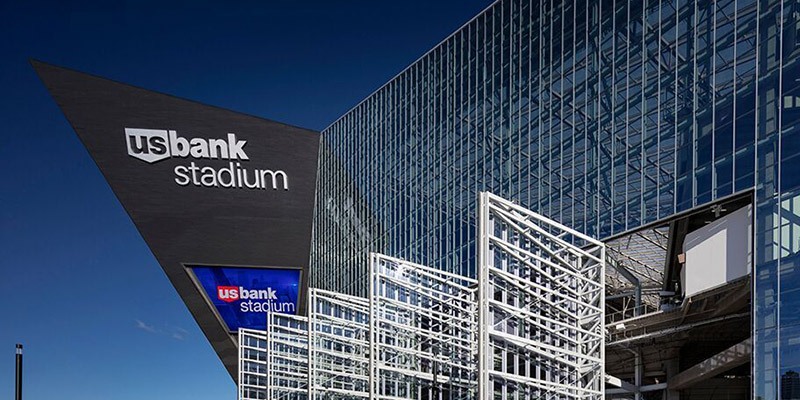 Running alongside World Architecture Festival 2017 is its sister event INSIDE which will showcase 2017’s most ground- breaking interiors projects. Visitors to INSIDE will be able to view this year’s best in class interiors nominations from leading practices and designers across four continents.