The winning team is collaborating with Gross.Max, Nigel Dunnett Studio and LAND for landscape design; Systematica for mobility; Studio Zoppini and Aecom for Olympics Advisory; Artelia on technical advisory; and Portland Design for brand and story development.

Parco Romana interprets the industrial legacy of the industrial site while reanimating it with contemporary programs centred on an ethos of sustainability. The are

This is the result of the international competition for the development of the airport Masterplan prepared according to the guidelines of the Municipality of Milan and announced by the Porta Romana Real Estate investment fund – promoted and managed by COIMA SGR and signed by Covivio, Prada Holding and the COIMA ESG City Impact fund – in agreement with the FS Ferrovie Italiane Group.

Parco Romana proposes a new model of integration between nature and city.

The project rethinks a large railway yard that has divided the area of Porta Romana for more than a century. It stitches together a fragmented urban realm, reconnecting surrounding neighbourhoods with a vibrant mixed-use district rooted in the principles of inclusivity, biodiversity, resiliency, connectivity and wellbeing. The area extends in the south-east of Milan, from piazzale Lodi in the west to via Ripamonti. 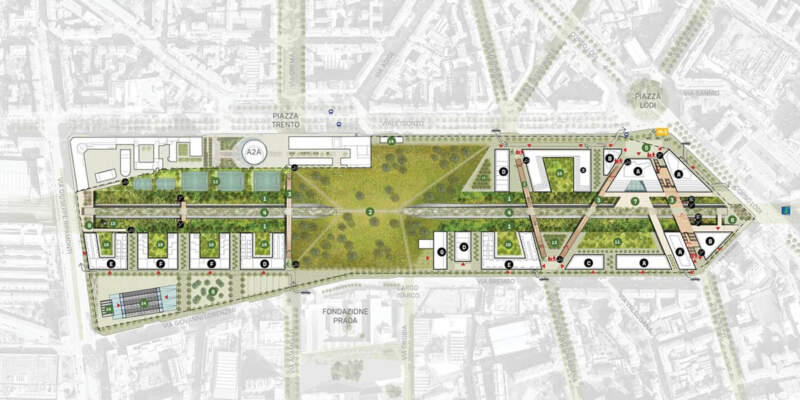 Residences and work spaces live in symbiosis with the natural landscape and outdoor activities; the integrated planning of the neighborhood encourages pedestrian travel, creating a car free area for gentle mobility.

The mix of public spaces and accessible paths hosts essential services and proximity trade as integral and living parts of the project. Parco Romana brings the latest thinking about the 15 Minute City to Milan, aiming to provide everything needed for daily life within a short walk from the district’s living and working environments.

Parco Romana is the natural heart of the project, a natural meadow without architectural barriers that makes the former railway site accessible within the surrounding urban fabric, creating a new public good rich in biodiversity.

An east-west connection that inspires further railway mitigation interventions, including a potential Milanese highline above the track beam to recreate permeability, pursuing the ambitious goal of allowing residents and visitors to cross the entire length of the Scalo, transforming the most obstructive feature of the former industrial area in a connector between public and private spaces.

Urban blocks design the edges of the surrounding streets; their tree-lined perimeters, the ground floors with neighborhood services for the communities, extend into the areas to the north and south of the site, creating an attractive pole also for the adjacent neighborhoods; at the center of the residential architecture, courtyards that recall the Milanese tradition, create semi-public areas within which to socialize, work and relax.

The masterplan’s commitment to sustainability defines and measures environmental and ecological objectives with performance indicators (KPIs) that guide the design and construction process.

In addition to meeting and integrating every requirement of the Program Agreement for the Porta Romana railway yard, the Environment and Ecology objectives align with the protocols of the Paris Agreement, the European Green Deal and the National Recovery and Resilience Plan defined at the SDG level of the United Nations.