MVRDV revealed its design for an office building, scheduled for completion in 2022, that will renovate and enlarge one of the last projects completed by celebrated Dutch architect Aldo van Eyck, the Tripolis office complex in Amsterdam.

The Tripolis office complex is located in the immediate vicinity of the municipal orphanage, the most famous building designed by van Eyck. His humane architecture, rejecting Functionalism and attacking the lack of originality in most post-war Modernism, aimed at creating places that fostered dialog and stimulated community life. Now the baton was passed on to MVRDV.

“The first day I entered Bouwkunde at TU Delft, I saw a packed lecture given by an old man, yelling with a plastic bag over his head, protesting against Carel Weeber and the other Rationalists in architecture those days. I thought, ‘Ah! This is the place to be’ and copied all his books the following day. So I am a fan of Aldo van Eyck’s oeuvre and I think we should treat his design as respectfully as possible”, says MVRDV founding partner Winy Maas.

With the name of Tripolis Park, the project comprises the renovation of the three Tripolis office buildings, completed in 1994, a new park, and a new office block that will create a sheltering screen to protect the complex from noise created by the adjacent highway while embracing the Van Eyck-designed buildings behind. 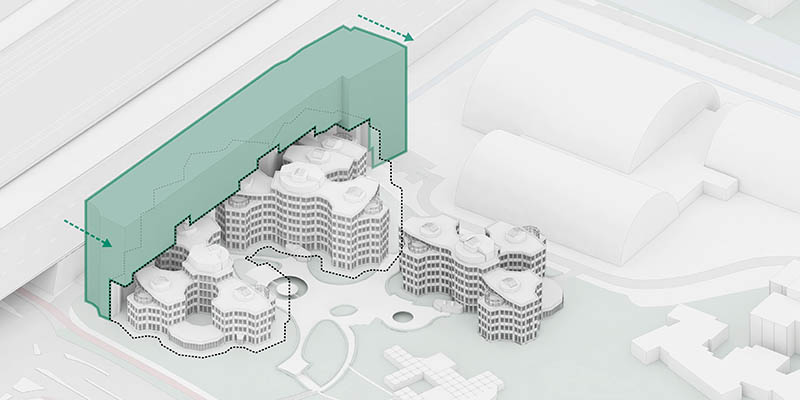 The three buildings of the Tripolis office complex each have clusters of offices radiating from central stair towers, and are notable for their characteristic wood-and-granite façades with colourful window frames. However, Van Eyck’s office design never proved commercially successful and the buildings have struggled with low occupancy. The project was granted Municipal Monument status in 2019, enshrining its status as part of a larger ensemble including the orphanage.

MVRDV’s design will bring much-needed commercial viability to the Tripolis office complex while respecting and celebrating the unique qualities of Van Eyck’s design. The key addition is a new 11-storey, 31,500-square-metre “groundscraper” office block which follows the shape of the site’s southern boundary, acting as a sound screen to protect the complex and future housing developments from the noise of the adjacent A10 highway. This block is indented where it meets the existing buildings, adapting its grid structure to the complex geometry of Van Eyck’s offices.

In the offset between the new and old structures an interior public route is formed. The gaps between the structures are closed by delicate glass walls and slender bridges and stairs to join the complex into a unified whole while ensuring a certain politeness to the existing buildings. The relation between the austere, regimented south façade and the playfully indented north façade is revealed by a high-transparency eight-storey window that provides a glimpse of the existing Tripolis buildings where the indentation punches almost all the way through the new structure.

“The new building guards and shelters the existing Tripolis complex as it were, thanks to the protective layer we create. We literally echo Tripolis, as if it was imprinting its neighbour. The space between will be given a public dimension and will be accessible to passers-by. As a visionary in his time, Aldo already saw office spaces as meeting places. I want to continue that idea by promoting interaction between the two buildings in various ways.”

Essential renovation will be applied to the old buildings, retaining each block’s central staircase, the natural stone floors and other characteristic elements. Office spaces will be given a high-quality, industrial feel, while the roofs will be greened and activated with roof gardens and spaces for catering.

MVRDV is amongst our selection of “best architecture firms in the Netherlands”.
Visit here to discover all the other renowned Dutch architecture practices.

After thirteen years as Communications Manager at Valcucine, as well as a two-year stint at Driade, I felt the need to launch something fresh and original in the design and architecture world. I've been always excited to meet architects and visit their architecture firms discovering more about their ethos, projects and vibes. That's why I founded ARCHIVIBE (formerly known as Architectours). I love to involve architects and discover the vibe of the practices where they design the future of the world and visit their awarded buildings. I love to inspire and tell about their new architecture projects and introduce design and building materials brands. I love to interact with architects and students and look at their astonished faces while attending to our studio visits.

The light won’t go down! Studiolabo and all the organisers of Fuorisalone.it are going to launch new formats.
Initially conceived as a support to the event, these new formats, due to the new circumstances, will now gain even more strength and value.

As announced yesterday, the board of Milan's Salone del Mobile announced the official cancellation of its 2020 edition. The most important design trade fair has been rescheduled to 2021. What’s going to happen now? Fuorisalone, the communication platform which offers a support system
View on Facebook
·Share

Salone del Mobile 2020 has been cancelled