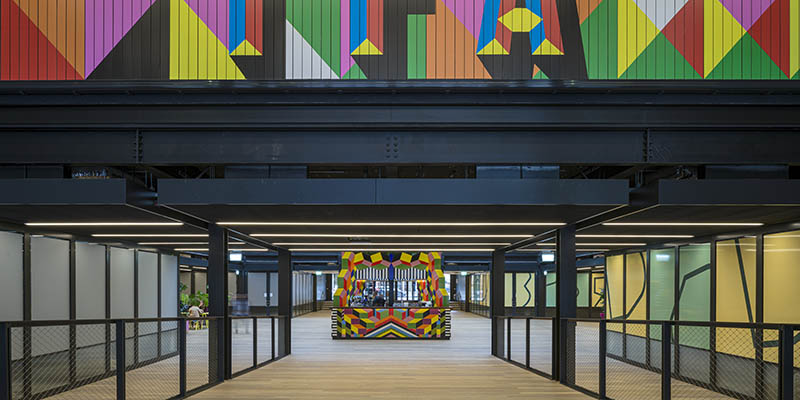 As part of the redevelopment of Broadgate’s inaugural building 1 Finsbury Avenue Square, British Land has commissioned a series of permanent works by British artist Morag Myerscough.

The striking centrepiece is the biophilic installation ‘Atoll’ – a colourful permanent 7.5m high structural intervention housing a cafe. Atoll is envisaged as a beacon that will encourage the public to use the newly opened route connecting the surrounding neighbourhood to the Broadgate campus, making a formerly corporate space accessible to all.  The semi-open nature of the interior also means that workers on the mezzanine levels can look down at the verdant planting within the structure. 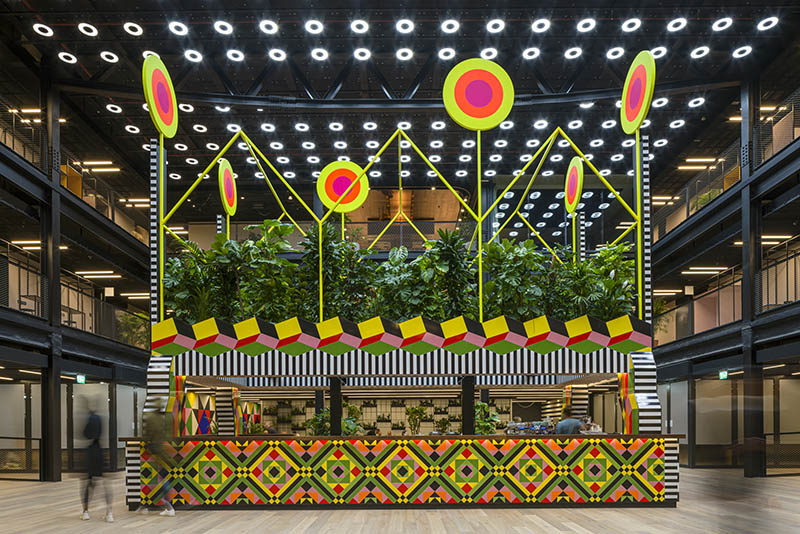 “My fascination with how the Victorians made public parks for city workers to get fresh air at weekends (as a child I lived very close to Finsbury Park) has inspired me to bring the park to the workplace at 1 Finsbury Avenue Square,” Myerscough explains.

The lower level is occupied by a café, run by Butterscotch Bakery, whilst the upper level of the Atoll incorporates the outline of three London terraced houses, surrounded by dense planting and completed with six neon suns signifying joy and energy. The houses make reference to Broadgate’s residential history, introducing a sense of intimacy and domesticity to the space.

At the public entry lobbies on the eastern and western sides of the building, Myerscough has incorporated Tri-wall advertising boards, animating three patterns. The concept, which was also successfully executed by Myerscough in her scheme for the Design Museum’s ‘Designer Maker User’ permanent exhibition, provides a warm welcome to visitors. The rotating Tri-wall format also gives a nod to the building’s 1980s heritage, further celebrating the era of Broadgate’s inception whilst looking to the future.

The installation continues to spread through the whole of the atrium with large-scale patterned hand-painted walls. An expansive seating area with hand-made and hand-painted overstuffed velvet cushioned seating, tables, benches and planters, designed and made by Myerscough and Luke Morgan at their local Hoxton studio. A rear translucent screen is covered in plants held within a bespoke metal planting grid designed and fabricated by Morgan. 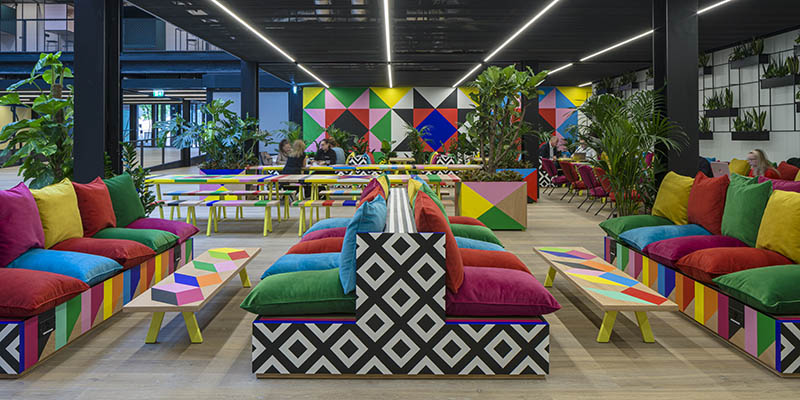 The materiality of the permanent installation is as important as narrative, with bespoke ceramic tiles and FSC-rated marine ply. Morag spent months developing the tiling, mixing Victorian references with her own signature colours and 3-D/optical patterns. The vibrant patterns contrast with 1FA’s symmetricality, dark bronze anodized cladding and black-painted exposed interior structure.

Public artworks have been part of the DNA of Broadgate since its inception. Broadgate’s long-standing commitment to art and design is evident in its carefully curated collection. Prominent permanent works include Richard Serra’s ‘Fulcrum’, Jim Dine’s ‘East End Venus’, Fernando Botero’s ‘Broadgate Venus’ and David Batchelor’s ‘Chromarama’. Works enliven public spaces and extend into the lobbies of buildings and across the neighbourhood. Visitors can take in the works via the Art Trail or simply explore London’s most diverse and welcoming art gallery which includes the newest additions at 1FA by Myerscough.

Welcome to ARCHIVIBE Your personal data (address or phone number, your user ID and password, e-mail address) are collected and processed by ARCHIVIBE for purposes strictly related to the proper use of the website and its information services, with information also provided by third-party advertisers. Your personal information may also be used in other processing operations, however, in a manner in line with these purposes. Your personal data is processed electronically and will be stored in a way that allows you to be identified for the time strictly necessary for the purpose for which the data was collected and subsequently processed and, in any case, within the limits of the law. To ensure that your personal information is always correct and up-to-date, relevant and complete, please inform us of any changes at: [email protected] Your personal information will not be disclosed to third parties for purposes not permitted by law or without your explicit consent. While using and browsing on our websites, some personal information may be collected automatically (by means of so-called "Cookie"), like, for example, the collection of the user's IP address and other information relating to browsing the website or the user's preferences expressed when choosing the services offered by the site. This information and data are collected directly and automatically by the web site and as part of its operational functions. Cookies serve different purposes. Cookies allow a site, for example, to: - Remember your login information - Offer you safe browsing after a login - Optimise the website performance by reducing the loading times of the pages you visit - Improve the user experience - Ensure a consistent appearance to the site - Remember the list of your favourite products - Remember the contents of your shopping cart - Remember the order at the moment of your arrival on the site - Allows you to use the "share" and "like" features - Send information to other websites for the personalisation of their advertisements Besides the cookies installed by the site, we use some third-party services that use external cookies. The purposes for which information is collected by these cookies are divided into the following types: > Analytical purposes, i.e. cooking serving to collect statistical information on the traffic and service use by the users, for example, how many visitors visited the site in a given period of time, which pages were visited, the duration of the visit etc.. This information is collected anonymously, and is not connected in any way with the personally identifiable information of the users who have visited the site. For this type of monitoring, we use the following third-party services: Google Analytics > Social sharing purposes. Some social networks may activate cookies for the proper functioning of their content sharing services. For example, when a site page contains a "share" or "like" button, the selected social channel establishes a direct connection to the site. The transmission of data to social networks is governed by the privacy policies and by the terms of use of the cookies of these companies, to which reference should be made for further information. Below is the list of social media networks used on the site: Facebook, LinkedIn, Instagram
<script type='text/javascript' src='https://www.archivibe.com/wp-content/plugins/adrotate/library/jquery.adro