Humaniti, designed by Lemay, is the tallest mixed-use community building in Montreal, Canada.

Located at the crossroads of the International district, the Quartier des spectacles, and Old Montreal, Humaniti is a new dynamic space for the human experience. It is designed to embrace the surrounding green spaces reconnecting urban dwellers with their natural environment. 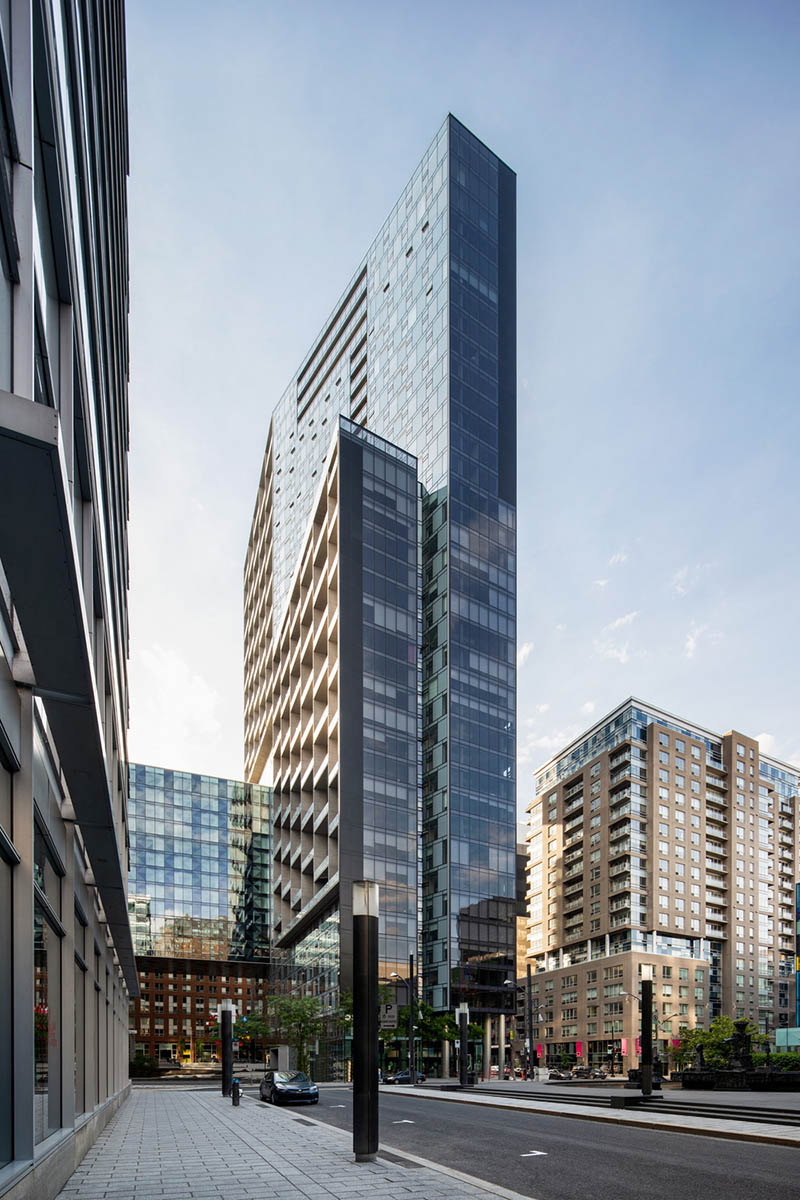 The multifunctional plaza is an extension of the magnificent Place Jean-Paul Riopelle, named after the internationally renowned Quebec painter and sculptor, that faces the project. 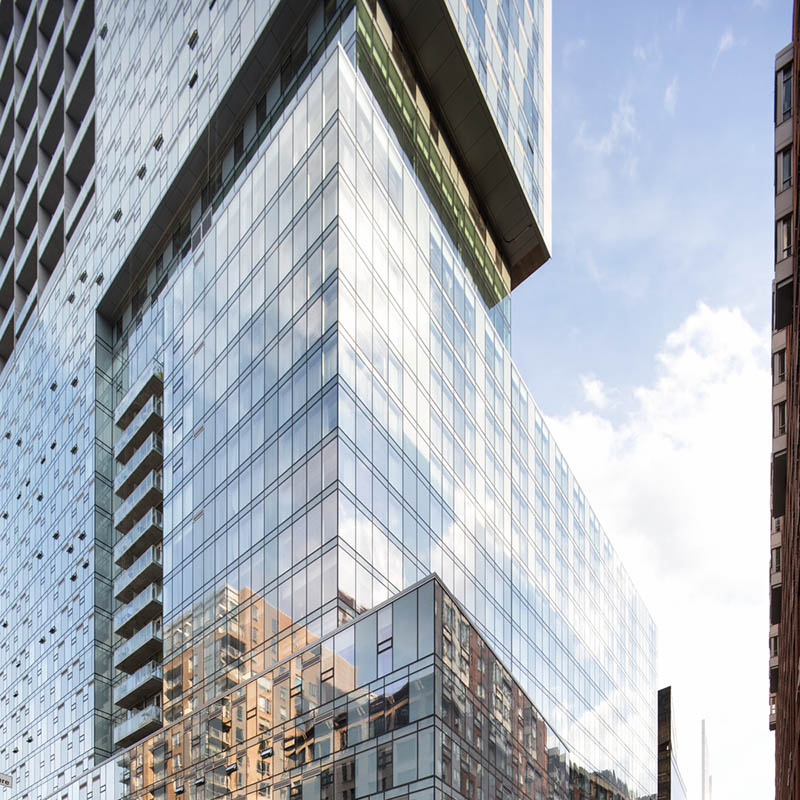 The objective was to create a tower that would have a presence in the Montreal city skyline, while also creating a sense of community in a hyper-dense area. Canadian design firm, Lemay, was brought in as lead architect, while sister brand, Lemay + Escobar, crafted the interiors of the hotel.

Its design strikes a balance between bold and sleek. Glass façades absorb and contribute to the energy of its surroundings by reflecting the richness and diversity of its location, while simultaneously creating an identity of its own. 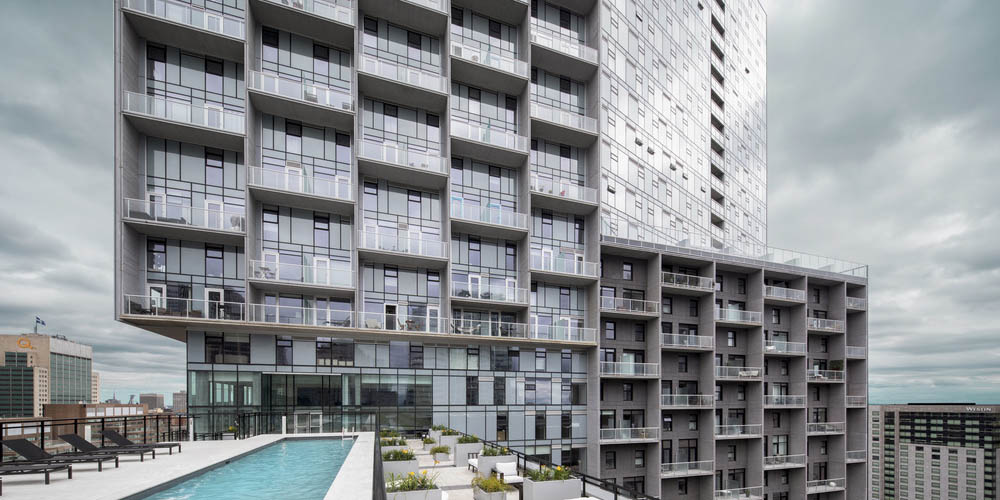 Open and generous, it creates a unique environment where multi-sensory human experiences abound. Humaniti responds to the different scales and limitations of the urban context, while reshaping the public realm of the project in both the streetscape and its vertical space.

From the center of Place Jean-Paul Riopelle, one can see two narrow blades that split. The tallest glass architecture has a truncated shape, paying homage to Manhattan’s Flatiron building. The second blade appears as though it splits off and falls from the monolith. 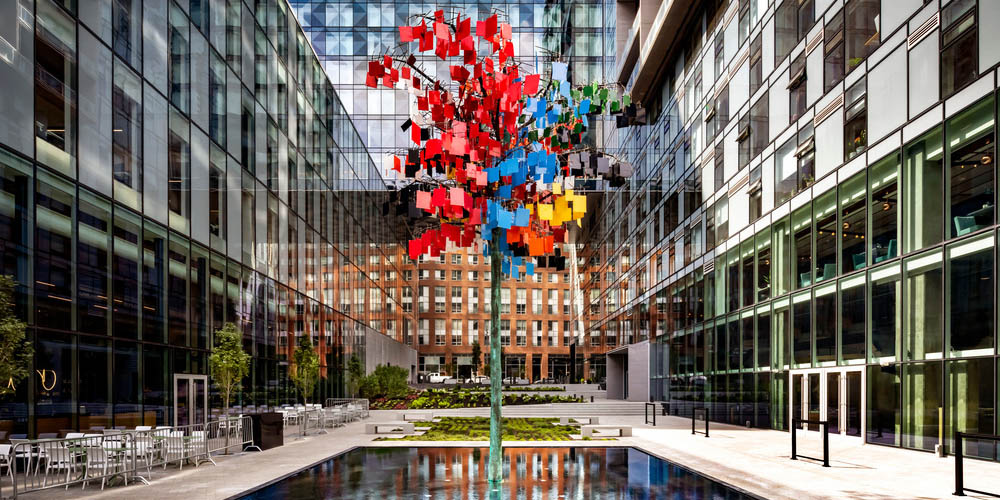 The breathtaking effect amplifies the experience from the neighboring square, echoing the mist in the central fountain back towards the vertical community.

The hives are a distinctive architectural gesture of the Humaniti, reinforcing the vertical city concept.

While not visible from the street in their entirety, these prefabricated balconies break the scale of the project and the continuity of the glazed façades to create a domestic discourse.

Each hive accommodates approximately four households, similar to the typology found in many Montreal neighborhoods.

Their staggered arrangement favors the penetration of natural light within residential units, while attracting the eye through their rhythm and simplicity. The hives’ human scale and well-defined groupings of condos evokes a smaller community feel, while accommodating hundreds of dwellings.

“Humaniti has shifted the playing field for mixed use projects in Montreal and Canada, testament to the courage of the development team, and challenges the status quo in numerous ways. It has emerged as an example of how thoughtful and nuanced design excellence strategies can play a part in the success of large and complex developments. Humaniti is key to the resurgence of the city, and a symbol of Montreal’s future as a design capital of the world.”– Andrew King, Chief Design Officer, Lemay

Marrying Humaniti’s residential and commercial complexes and completing the community’s unique “H” shape, the 4.5-star Marriott Autograph Collection hotel is spread over 11 floors, and is suspended on a cantilever-shaped structure.

“The project is located in the Quartier International, a few steps from the Palais des Congrès, the city’s iconic convention center, and on the threshold of the historic city centre. It is an iconic, youthful, and vibrant scene, and we therefore wanted the focus to be on fun and joy, and to be very contemporary. We drafted the space with clean lines, and we curated it with eclectic art and furniture.” – Andres Escobar, Design Principal, Lemay + Escobar

Inside the hotel, two concurrent design themes are at work:

Nowhere is that better exemplified than in the lobby of the Humaniti Montreal Hotel, as the chandelier, twisted in the sinuous shape of a DNA strand, beautifully complements the high ceilings, geometric floors, and striking ceiling pattern, along with a gold linear partition. 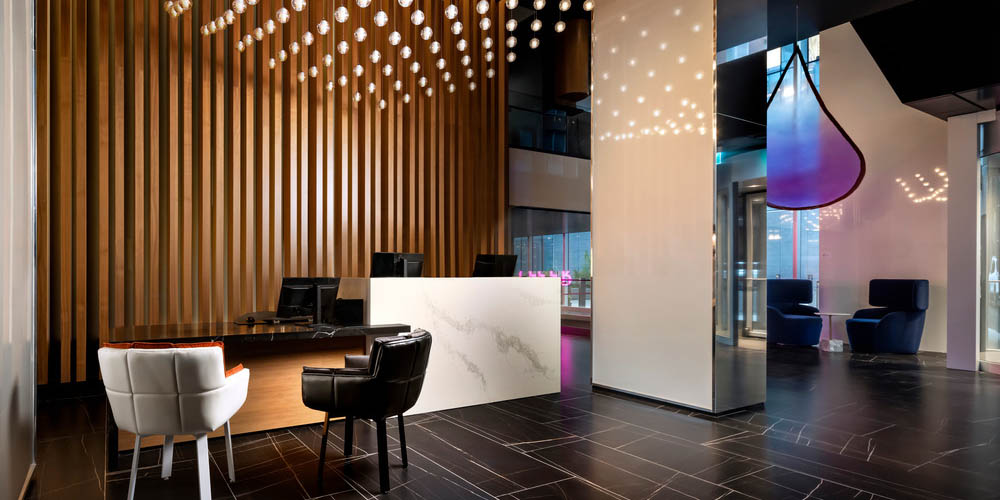 The sculptural art pieces displayed throughout the lobby convey a similar contrast between geometry and humanity.

The same holistic approach characterizes the guestrooms, with a color palette consisting primarily of rich yellows and deep teals. This fosters a rich balance between the happiness and spontaneity of yellow, and the tranquility and peaceful optimism of teal. 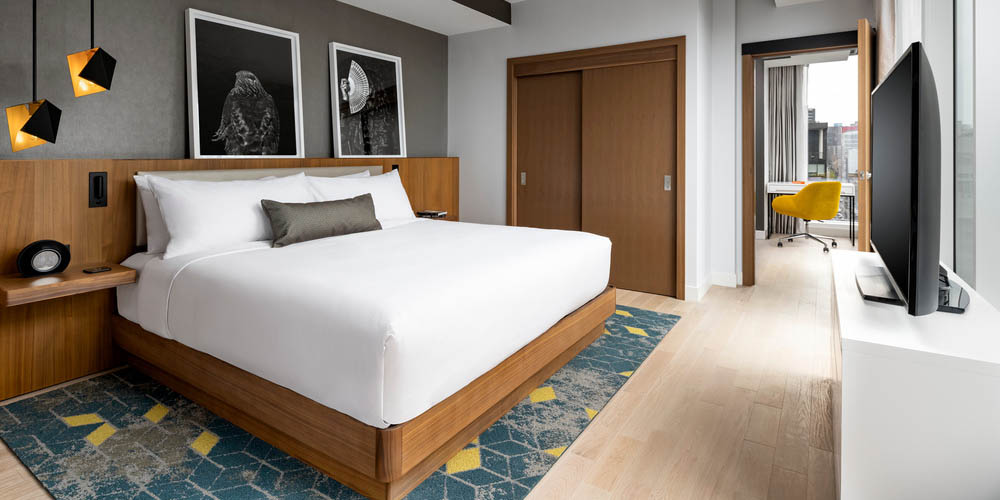 The geometric patterns found in the guest rooms, seen both in the carpet and bathroom tile, underscore the overall architecture of Humaniti.

These elements provide a vibrant contrast to softer design elements such as the artwork, inspired by mother nature, and the human-like pair of sculptures. 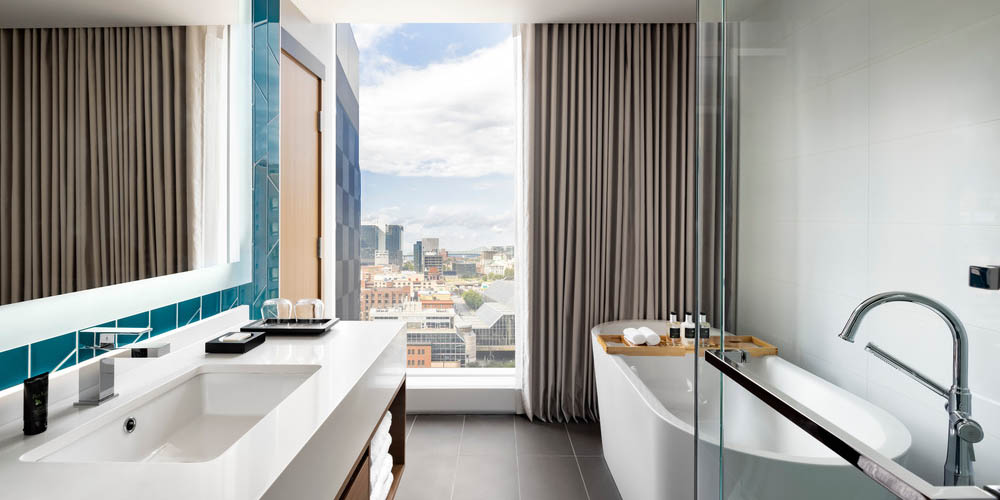 The vertical community allows residents and visitors alike to enjoy big city living, while connecting with nature, favoring well-being, and striking a dialogue between its residents and the spaces they inhabit.