Danish everyday life as a way to understand Danish architecture

Danish everyday life as a way to understand Danish architecture

Exhibition Hello Denmark celebrates Danish living in Danish Architecture Center (DAC), a meeting place for anyone with an interest in architecture, design, and urban culture.

What do lifeguard stations, cargo bikes, and the aim of living no more than a third of a mile from green areas have in common?

Dutch experience design agency Tinker Imagineers, founded in 1991 and is located in Utrecht, created this new exhibition called Hello Denmark in collaboration with the center.

The exhibition is a tribute to Danish architecture and design. Visitors can explore what has made Denmark and Copenhagen popular throughout the world: a good everyday life. (Here you can discover our selection of best architecture firms in Denmark).

Denmark is often cited in international contexts as a role model when it comes to creating optimal living conditions for the population. It has been elected the world’s happiest country several times. 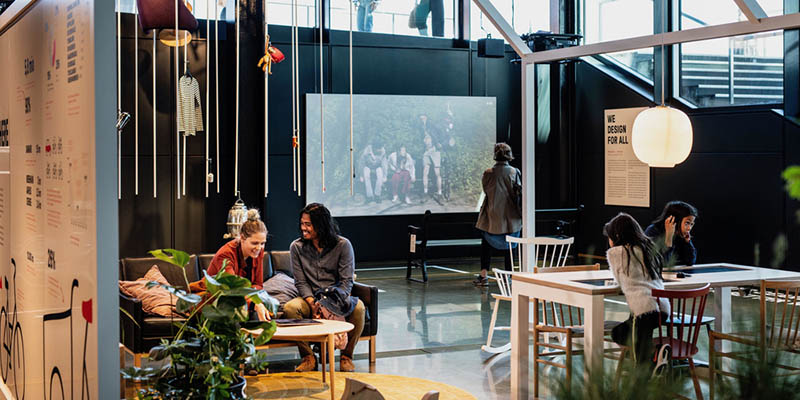 What are the ingredients in the Danish people’s coveted recipe for the good life?

In this exhibition, the visitor will experience six installations, each representing an element from the everyday life the Danes value so highly that influence how they build, reside, and live. It is about a close relationship to nature, the trust upon which the society is built, the insistence on ‘hygge’, the unique bicycle culture, the design-infused society, and the need to live near water. “Hygge” didn’t originate in the Danish language but in old Norwegian, where it meant something like “well-being.” 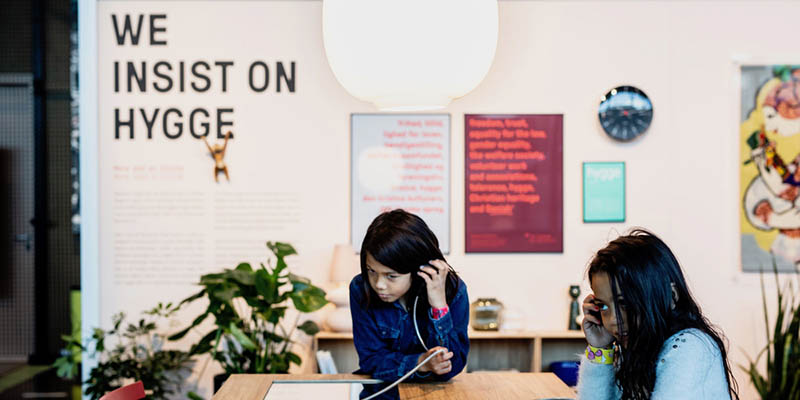 In white frames, a stark contrast to the dark space around them, key Danish objects are presented. In combination with animations and infographics, they explain where these typical Danish values come from. The design makes full use of the transparency of the glass and steel BLOX building (OMA Architects), by creating interactions across its façade to connect the inside with the outside inviting the visitors to come in and see the exhibition. 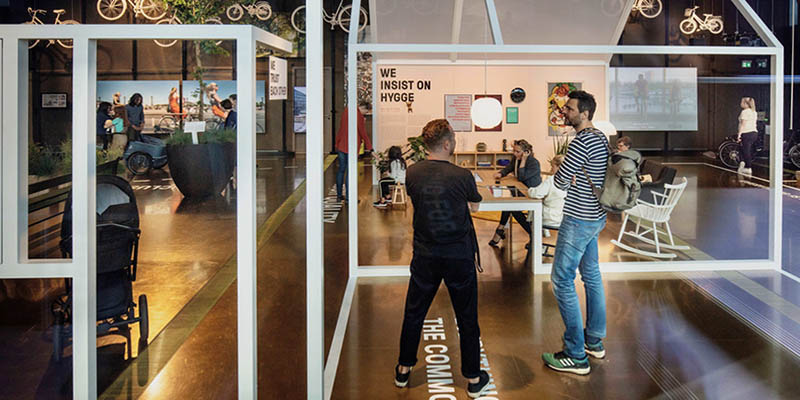 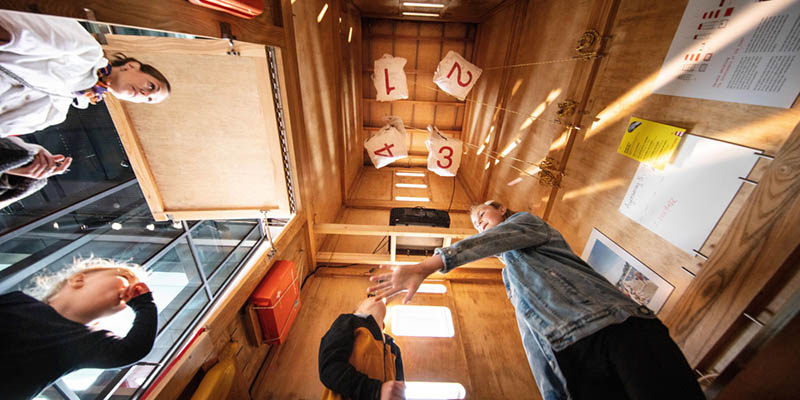 It is not the first time Tinker delivers a project in Denmark. In 2017, Tirpitz Museum opened its doors. An impressive museum hidden in the dune landscape, connected with a WWII bunker of the Atlantikwall. Tinker was commissioned to design and produce the scenography. Tinker is currently developing the new exhibition design for the Natural History Museum in Copenhagen and an exhibition at the new Stevns Klint World Heritage Visitor Centre.

The Hello Denmark exhibition is located in DAC’s Golden Gallery.
The exhibition opened on June 8 and will be on show until October 18 this year.

Welcome to ARCHIVIBE Your personal data (address or phone number, your user ID and password, e-mail address) are collected and processed by ARCHIVIBE for purposes strictly related to the proper use of the website and its information services, with information also provided by third-party advertisers. Your personal information may also be used in other processing operations, however, in a manner in line with these purposes. Your personal data is processed electronically and will be stored in a way that allows you to be identified for the time strictly necessary for the purpose for which the data was collected and subsequently processed and, in any case, within the limits of the law. To ensure that your personal information is always correct and up-to-date, relevant and complete, please inform us of any changes at: [email protected] Your personal information will not be disclosed to third parties for purposes not permitted by law or without your explicit consent. While using and browsing on our websites, some personal information may be collected automatically (by means of so-called "Cookie"), like, for example, the collection of the user's IP address and other information relating to browsing the website or the user's preferences expressed when choosing the services offered by the site. This information and data are collected directly and automatically by the web site and as part of its operational functions. Cookies serve different purposes. Cookies allow a site, for example, to: - Remember your login information - Offer you safe browsing after a login - Optimise the website performance by reducing the loading times of the pages you visit - Improve the user experience - Ensure a consistent appearance to the site - Remember the list of your favourite products - Remember the contents of your shopping cart - Remember the order at the moment of your arrival on the site - Allows you to use the "share" and "like" features - Send information to other websites for the personalisation of their advertisements Besides the cookies installed by the site, we use some third-party services that use external cookies. The purposes for which information is collected by these cookies are divided into the following types: > Analytical purposes, i.e. cooking serving to collect statistical information on the traffic and service use by the users, for example, how many visitors visited the site in a given period of time, which pages were visited, the duration of the visit etc.. This information is collected anonymously, and is not connected in any way with the personally identifiable information of the users who have visited the site. For this type of monitoring, we use the following third-party services: Google Analytics > Social sharing purposes. Some social networks may activate cookies for the proper functioning of their content sharing services. For example, when a site page contains a "share" or "like" button, the selected social channel establishes a direct connection to the site. The transmission of data to social networks is governed by the privacy policies and by the terms of use of the cookies of these companies, to which reference should be made for further information. Below is the list of social media networks used on the site: Facebook, LinkedIn, Instagram
<link rel='stylesheet' id='avada-max-main-css' href='https://www.archivibe.com/wp-content/themes/Avada/assets/css/media/max-main.min.css?ver=7.2.1'