Barozzi Veiga, amongst our “best architecture firms in Spain“, was founded in Barcelona by Fabrizio Barozzi and Alberto Veiga in 2004. The practice has since worked internationally in public and private projects and its work has received several prestigious distinctions. Its body of work includes cultural, educational and residential buildings as well as civic projects.

In 2011 they won the international competition for the definition of a masterplan for the new Art District in Lausanne, Switzerland – called Platform 10 – and subsequently designed and built the Musée cantonal des Beaux-Arts Lausanne. After 8 years the museum opened its first exhibition on the 5th of October, 2019.

The union of the Musée cantonal des Beaux-arts (MCBA), the Musée de l’Elysée, developed by Portuguese architects Manuel and Francisco Aires Mateus and the mudac, complemented by the presence of the Toms Pauli and Félix Vallotton Foundations, form Platform 10.

Platform 10 will consist of more than the museums. Its welcoming, open environment will benefit from a large complementary programme that enriches this cultural platform in the heart of the city. This will help attract a broad range of visitors, particularly those who rarely or never set foot in museums. Partly involving the fourteen arcades in the northern retaining wall, but extending throughout the site, the shared programme will serve as a showcase for museal activities while also providing a place to meet, eat and relax. The site’s facilities and atmo­sphere will highlight the cultural char­acter of the district. This common space will also include services shared by the museums, including the bookshop/boutique, the library/documentation centre, various dining spaces as well as auditoriums. The shared programme will also offer activities aimed at stimulating contact with art by using the district’s large public spaces, as well as art residencies that contribute to Plateforme10’s creative dynamic.

As an urban strategy, the masterplan implements a new structuring void, a public square around which the new museums gravitate. The void stretches along the site and, being connected to the existing train station’s square, it constitutes a new continuous main public space. The new architectures become the frame of the urban life of the city and the containers of the new public art centre of Lausanne. 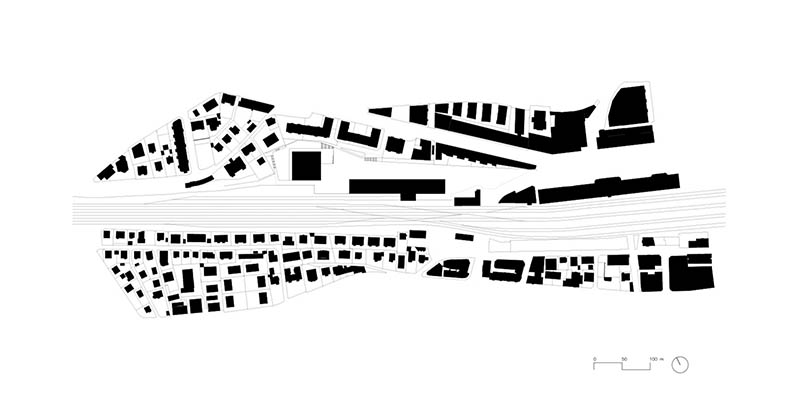 The Musée cantonal des Beaux-Arts Lausanne takes place on the southern edge as a longitudinal monolithic volume, parallel to the rails, defining the urban space while protecting it from the trains’ nuisances. Embracing this condition, the project carries and expresses the memory of the site, echoing the former industrial condition with pragmatic forms, rigorous geometry and hard, sharp lines. 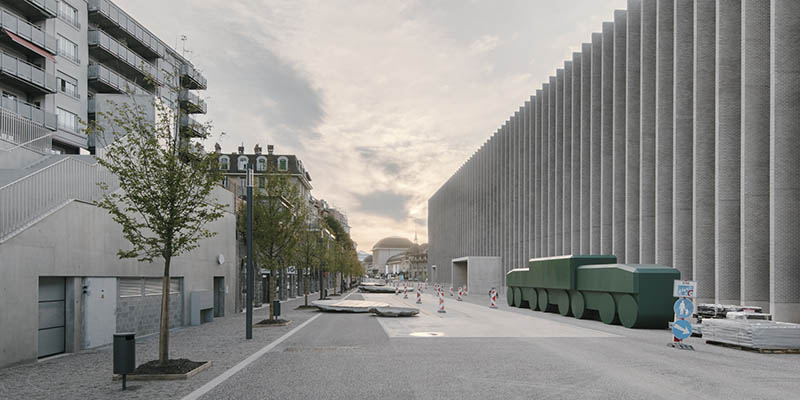 The overall Platform 10 building façade is relatively hermetic. In order to protect the collections, the museum has a closed, introverted façade to the railway side, to the south. A more open, permeable and animated façade characterizes the north elevation, towards the public space. The brick façades evoke the industrial history of the site and offer a texture, a vibrant pattern to the monolith. 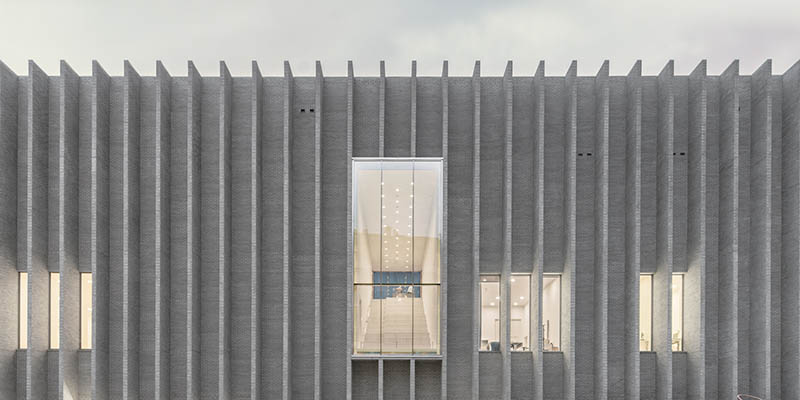 On the square, the vertical blinds’ rhythm breaks the massiveness of the monolith and reveal the openings. At night, these blinds serve as a canvas to diffuse the interior light coming from the museum. 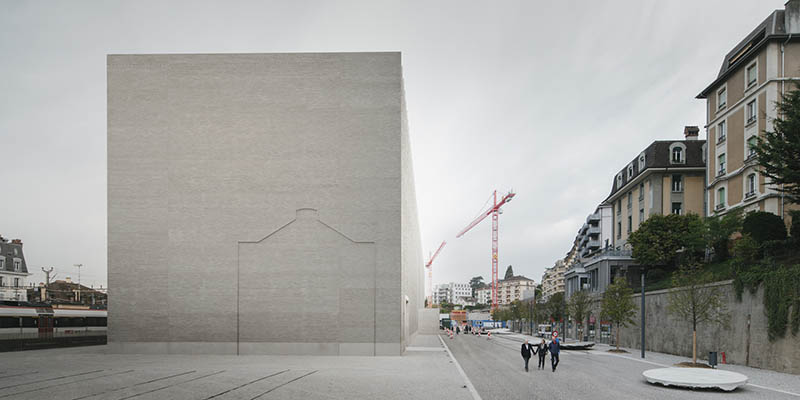 Moreover, the memory of the place is achieved through the preservation of specific fragments. The design preserves part of the original hall and transforms it as a central piece of the project. The old arched window becomes the main protagonist of the building façade from the railway and, once within the foyer, it reveals its full role as a substantial structuring component of the new building’s sequence of spaces. 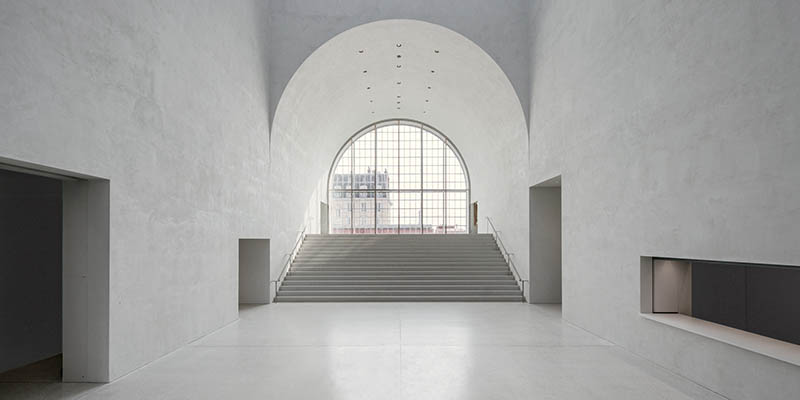 Platform 10 is organized on three floors connected by the continuous void of the foyer that structures the circulation and the program. 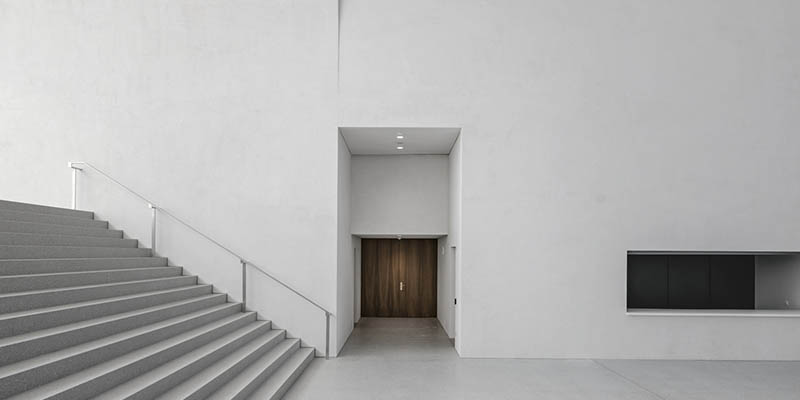 The ground floor developed as the extension of the public square and shelters the main public programs such as the café, the bookshop, the auditorium etc. The façade on that level is very porous in order to allow for these internal functions to be in continuity with the exterior public space of the square.

On the higher levels, on both sides of the foyer, take place the exhibition spaces. The permanent gallery to the east is separated from the temporary gallery to the west. They can be visited with a single continuous tour or in parallel tours, thanks to independent vertical circulations which allow future comprehensive exhibitions as well as smaller capsule collections. 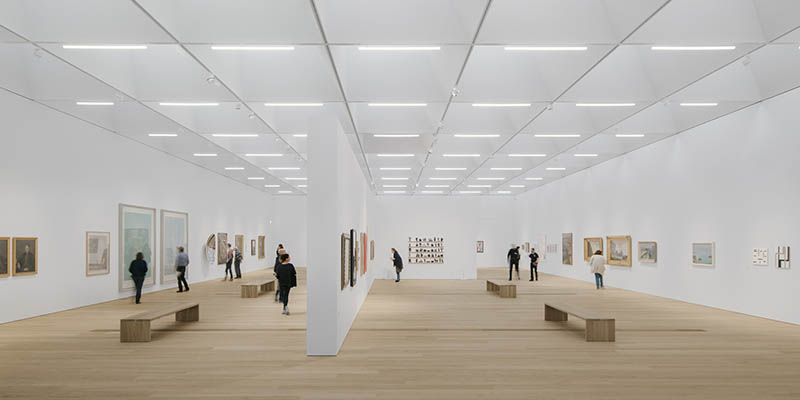 The upper floor is naturally lit up through north-oriented modular sheds, designed to filter and adjust the solar light. These sheds have an internal system of blinds to allow a meticulous control of the amount of light entering the rooms as well as the possibility of a dimmed atmosphere to offer optimal conditions for the art pieces. 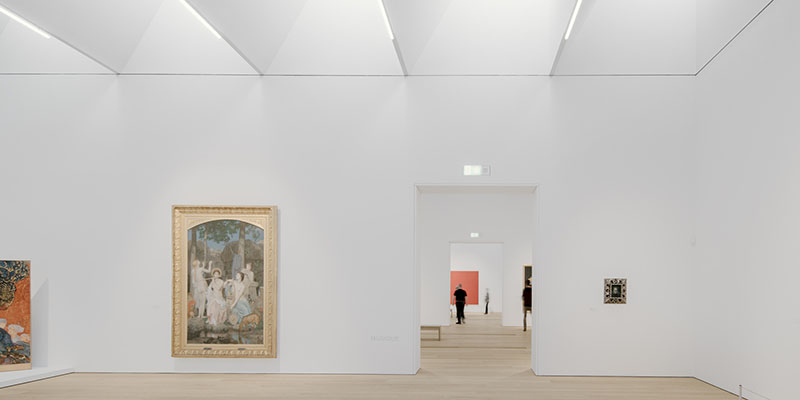