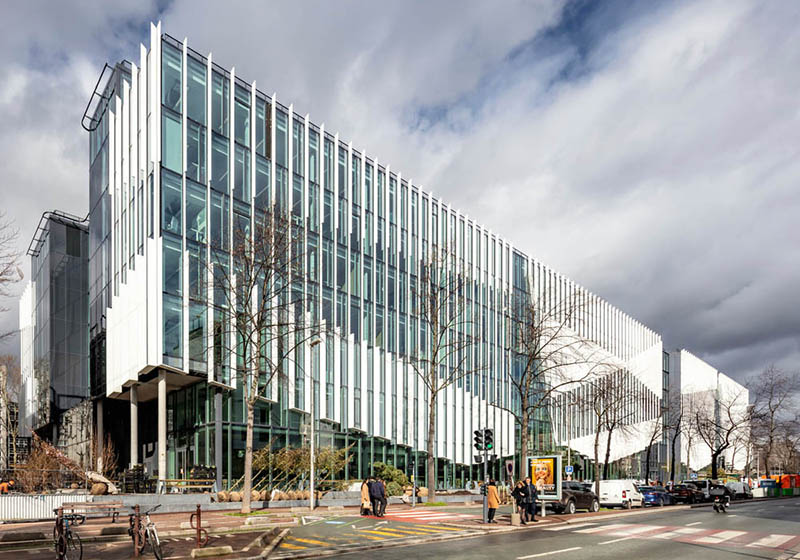 Ideally located in a thriving neighborhood that is attracting many companies and administrations, Shift office building, designed by Arte Charpentier Architectes – included in our selection of top architecture firms in France – has been conceived as an accelerator of transformation towards more collaborative ways of working and concerned about employee fulfillment.

The original office building, straddling the boundary between the 15th arrondissement of Paris and the district of Issy-les-Moulineaux, was designed and built by Arte Charpentier Architectes at the beginning of the 1990s for Unibail.

This heavy rehabilitation allowed the implementation of two major interventions who have brought the building out of self-imposed isolation and allowed it to reconnect with the city, setting up a renewed dialogue with the immediate surroundings :

Reinventing the uses and ways of working in an existing building, Shift operates an architectural and ecological transition of the building which aims at the double certification BREEAM “Excellent” and HQE “Exceptional”. Shift is a laboratory for experimenting with future practices, such as urban agriculture.

A major architectural innovation, the vertical fault located in the center of the building is overhung by a large glass roof. It houses a complex set of mezzanine balconies, connected by a monumental staircase, whose construction process was like a suspended mobile, from top to bottom. 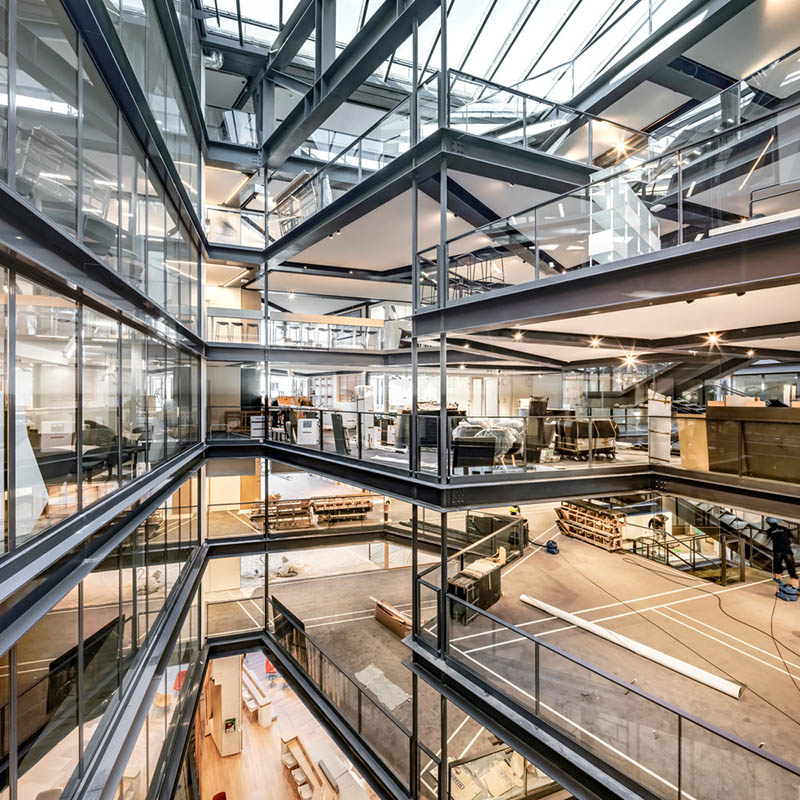 Within the modern and lively atmosphere generated by this interplay of raw and refined materials and a warm palette, Shift’s generous spaces exude a warm, welcoming ambiance.  Continuing the rhythmic theme of the façades set up by the vertical fins, the entrance lobby is finished in vertical battens in Beech.

The whole of the 5000m² ground floor level is occupied by communal and shared facilities organized around the central atrium space, including the reception, the Welcome Bar (200 m²), the caretaker service, the beauty room, the Plug & Work area (177 m²), the entrance lobby (122 m²), the 200 seat auditorium, the restaurant (1700 m²) plus formal and informal meeting areas (180 m²). 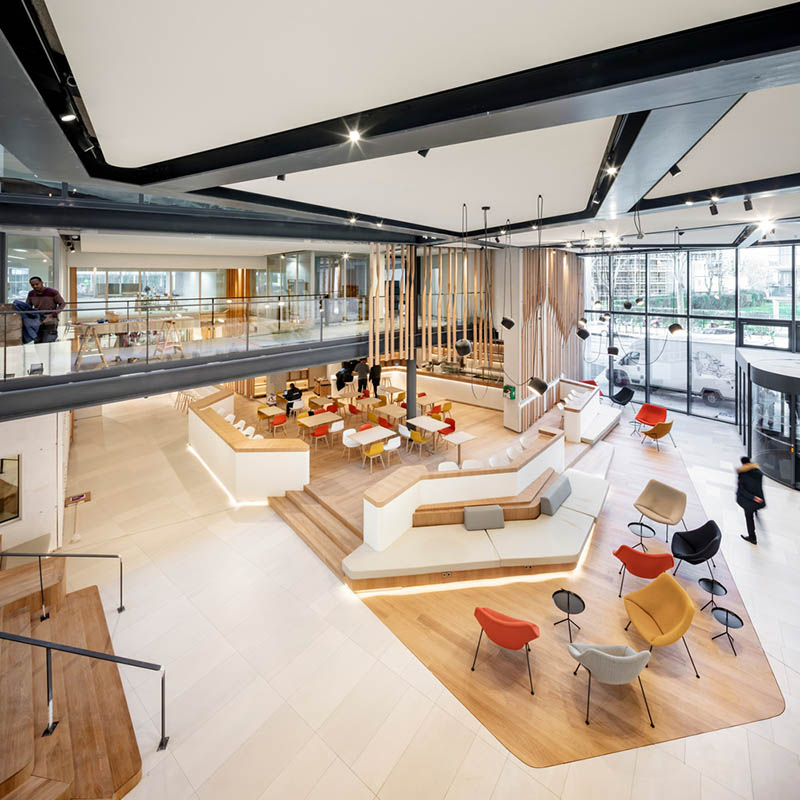 The restaurant, offering 5 different catering themes each day for 1800 settings, create a buzz similar to a marketplace with a bar situated close to one of the entrances, and kiosks for each of the dining themes lining the central area. It benefits from a vast green terrace (60 places).

At the heart of the project is the central unifying space around which the daily working experience revolves offering comfort and conviviality, inspiration and creative thought, social interaction, and exchange. The offices (5,800m² on average/clear height from 2.65 m to 2.90 m) with varying depths, breaks with the usual monotony of standard layouts, and increases the possibilities for adaptation. The largely glazed façades allow natural light to be used as the main source of lighting. 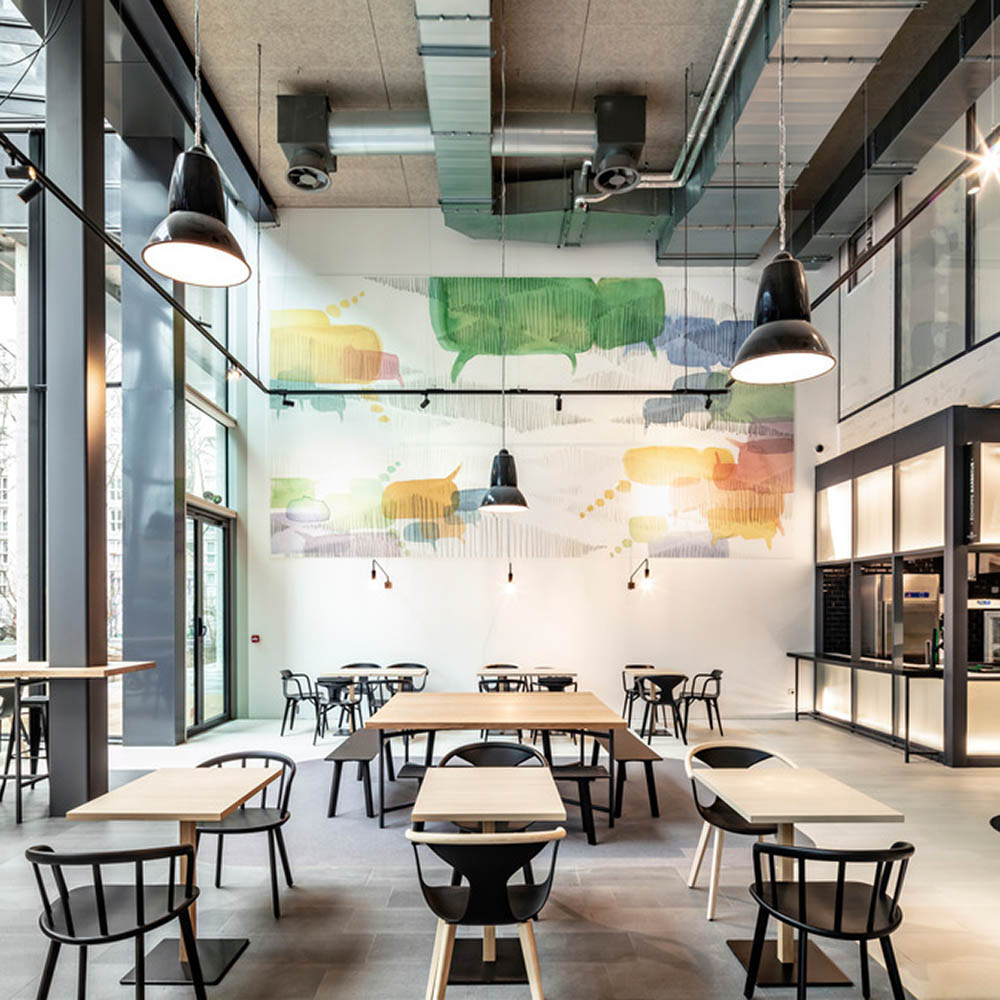 Designed like a garden, Shift office building integrates plants into its interior with its 1,800 m² of private terraces, loggias, and balconies. The former technical roof has been transformed into a landscaped and green terrace on 2 600 m² offering real living spaces: an alternative outdoor workspace, a restaurant for lunch in the greenery, and 1,000 m² of urban agriculture operated by Sous les fraises, which partly feeds the RIE with the virtuous and educational aim of raising awareness of the notions of ecology and proximity. 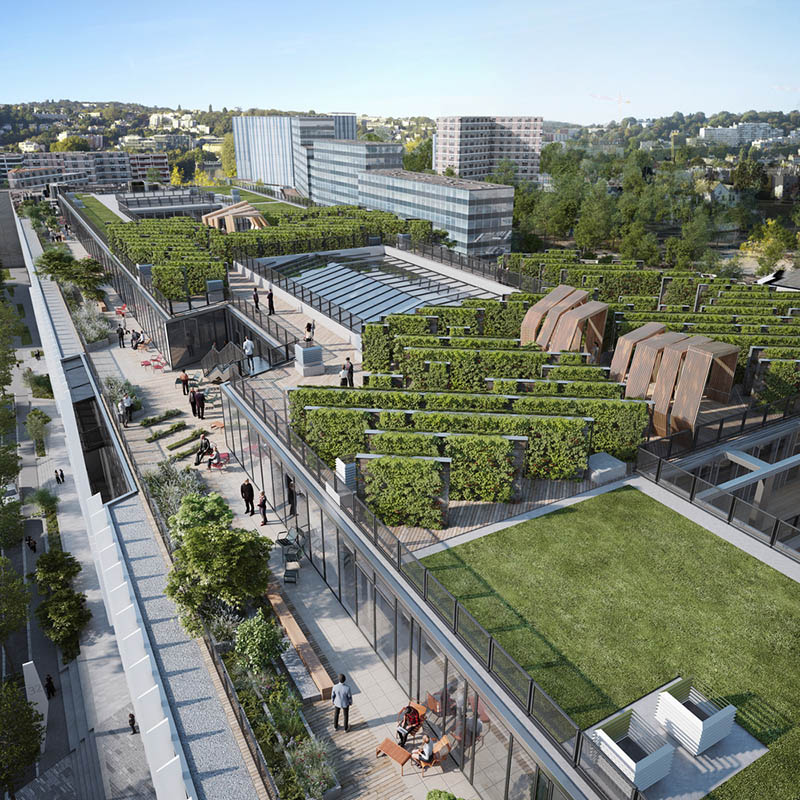 This ambitious scheme, led by Arte Charpentier, under the impetus of Unibail-Rodamco-Westfield, attracted Nestlé France, who chose to set up their first Centre of Nutritional Expertise in France. The 2 500 employees of the various brand names belonging to the group, such as Nespresso, Nestlé Waters, Herta, Galderma, etc are brought together within Shift’s 46 000 m².

Welcome to ARCHIVIBE Your personal data (address or phone number, your user ID and password, e-mail address) are collected and processed by ARCHIVIBE for purposes strictly related to the proper use of the website and its information services, with information also provided by third-party advertisers. Your personal information may also be used in other processing operations, however, in a manner in line with these purposes. Your personal data is processed electronically and will be stored in a way that allows you to be identified for the time strictly necessary for the purpose for which the data was collected and subsequently processed and, in any case, within the limits of the law. To ensure that your personal information is always correct and up-to-date, relevant and complete, please inform us of any changes at: [email protected] Your personal information will not be disclosed to third parties for purposes not permitted by law or without your explicit consent. While using and browsing on our websites, some personal information may be collected automatically (by means of so-called "Cookie"), like, for example, the collection of the user's IP address and other information relating to browsing the website or the user's preferences expressed when choosing the services offered by the site. This information and data are collected directly and automatically by the web site and as part of its operational functions. Cookies serve different purposes. Cookies allow a site, for example, to: - Remember your login information - Offer you safe browsing after a login - Optimise the website performance by reducing the loading times of the pages you visit - Improve the user experience - Ensure a consistent appearance to the site - Remember the list of your favourite products - Remember the contents of your shopping cart - Remember the order at the moment of your arrival on the site - Allows you to use the "share" and "like" features - Send information to other websites for the personalisation of their advertisements Besides the cookies installed by the site, we use some third-party services that use external cookies. The purposes for which information is collected by these cookies are divided into the following types: > Analytical purposes, i.e. cooking serving to collect statistical information on the traffic and service use by the users, for example, how many visitors visited the site in a given period of time, which pages were visited, the duration of the visit etc.. This information is collected anonymously, and is not connected in any way with the personally identifiable information of the users who have visited the site. For this type of monitoring, we use the following third-party services: Google Analytics > Social sharing purposes. Some social networks may activate cookies for the proper functioning of their content sharing services. For example, when a site page contains a "share" or "like" button, the selected social channel establishes a direct connection to the site. The transmission of data to social networks is governed by the privacy policies and by the terms of use of the cookies of these companies, to which reference should be made for further information. Below is the list of social media networks used on the site: Facebook, LinkedIn, Instagram
<link rel='stylesheet' id='avada-max-shbp-18-c