Mutation is the main idea of the refurbishment and transformation project of the Poste du Louvre by Dominique Perrault Architecture: from a closed industrial building to an open urban complex.

Since its inauguration in 1888, La Poste du Louvre in Paris, France has been in perpetual evolution. Built from 1878 to 1888 by the architect Julien Guadet for the needs of the National Post Office, this building, emblematic of the Parisian construction sites of the Third Republic, fits perfectly into the typology of the Haussmannian arteries of the 1st district of the French Capital City.

Behind the elegant classicism of its dressed-stone facades, with spans regulated by powerful buttresses, the construction techniques of the industrial era, represented in particular by the long-span metal frames of the Eiffel type, already seemed to allow a great deal of flexibility.

A manifesto work by the architect, the building-island is conceived both as a “hotel”, facing the rue du Louvre and dedicated to the reception of the public, and a “factory”, with the heart of the island dedicated to the sorting of mail and open to the three other streets. 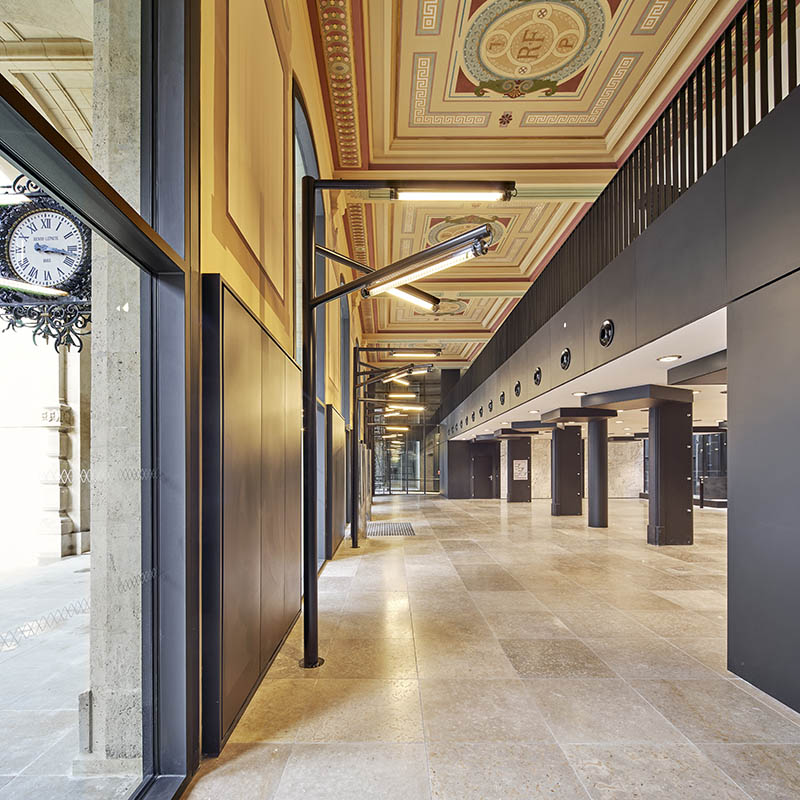 In the heart of Paris, La Poste du Louvre was a stone block, closed on three sides, and open to the public through its single post office, located on Rue du Louvre.

The urban and architectural concept consisted of reintroducing this legacy complex into the life of its neighborhood and making it a real place of sociability and services, accessible to all. This is part of a series of major projects in the heart of Paris including the transformation of Les Halles leisure and shopping complex, the Samaritaine department store, and the Bourse de Commerce. 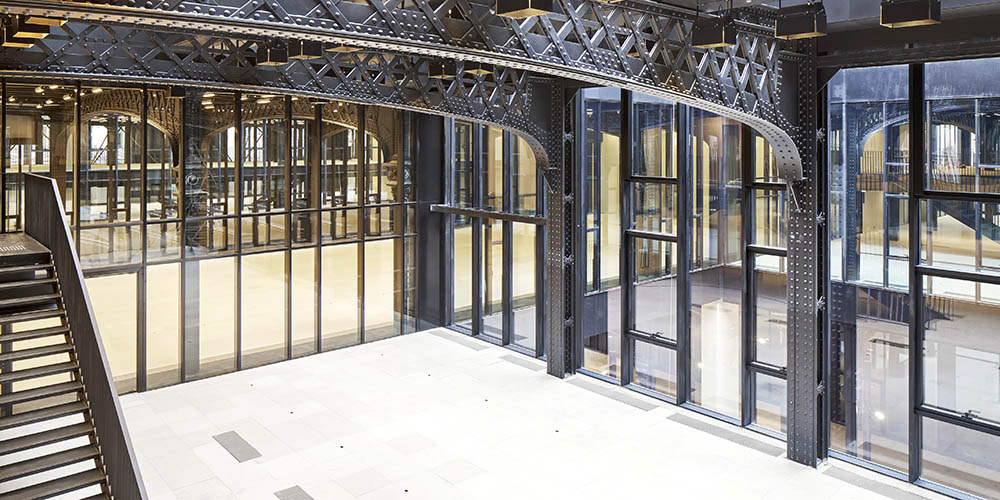 From the outside, on its stone facades, the project favors the urban integration of the volume. The monolithic island is made “permeable” and connected to its environment, by the creation of a network of porches, arcades and galleries, openly inspired by covered passages, including the famous neighboring Vivienne or Véro-Dodat shopping arcades.

Five passageways now converge towards the heart of the block, from the streets of the Louvre, Jean-Jacques Rousseau, Etienne Marcel and the Gutenberg passage.

They converge on a central courtyard, designed as an open-air industrial courtyard, around which shops and services will open. 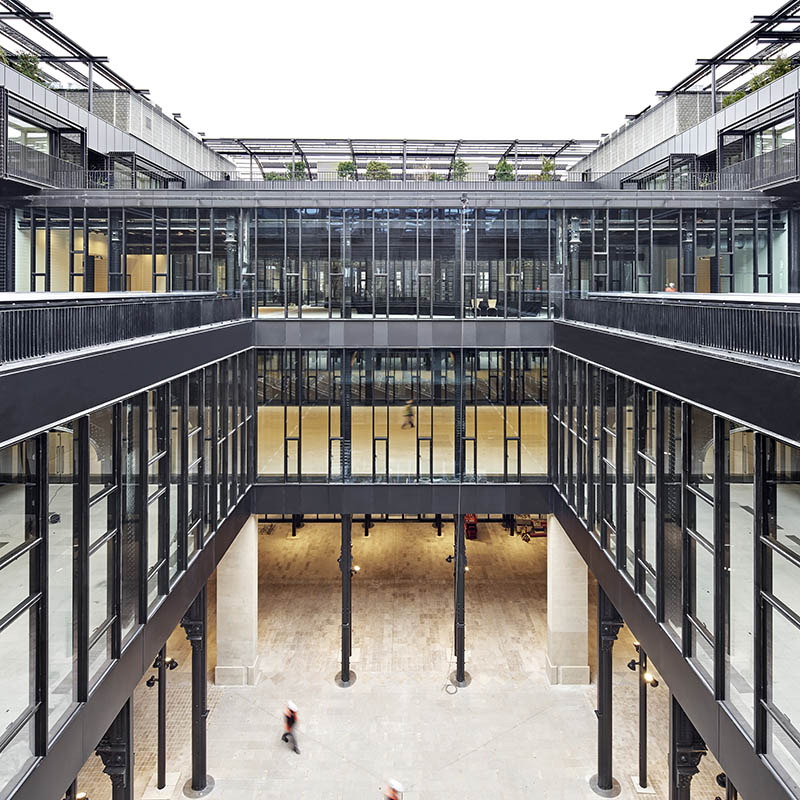 La Poste du Louvre thus opens up to the city and serves as the setting for a new urban square. Glass facades and curtain walls allows a maximum of natural light to enter its heart and reveals to all the impressive volumes and the interplay of the historic metal structures.

The new Poste du Louvre now offers a mixed-use program connected to the functions of its neighborhood.

It welcomes a 5-star hotel with 82 rooms, a restaurant and a panoramic rooftop bar. Open to the public and directly accessible from Rue Étienne-Marcel, it offers a spectacular view of the capital’s roofs. La Poste du Louvre will also offer shops, social housing, and offices, as well as numerous services, including the preservation of the historic post office, the creation of a police station, a childcare center, and an urban logistics hub in the basement. La Poste du Louvre is thus intended to operate at all hours of the day and night.

The organization of the various programs is based on horizontal layers, in the tradition of Haussmann buildings. The basement, on two levels, houses urban logistics areas. The first floor, under the arcades on the street and around the inner courtyard, houses shops, the historic post office and the various addresses of the establishment. On the upper floors, the offices will be organized between the courtyard and the street.

The majesty of the volumes, the restored vaults of the existing brick ceilings, the exposed Eiffel-style structures and the ceiling heights offering a maximum of 6.80m, give a unique character to the floors, and the new glass curtain walls and the whole glass architecture ensure optimal penetration of natural light.

On the top floor and roof, the new hotel, with the garden and terrace level above, takes its place in the Parisian roof scenery.

The preservation of the building’s heritage elements focused on the conservation, restoration and exposure of the stone and metal architecture of Julien Guadet’s original building.

In collaboration with Jean-François Lagneau, chief architect of the Monuments Historiques, the work of highlighting the stone facade, the metal frames and the great heights, contributes to the of the project’s success by establishing a new harmony between heritage and modernity. The design preserves and enhances the concept of Julien Guadet’s “versatile building”, with a constant concern for respecting the historic building, while integrating strong elements of modernity.

An emblematic work of this monumental architectural style, the large stone facade has been restored to its initial architectural quality. A work on the openings, with the creation of joineries worked in curves towards the interior, give the building a new modern appearance. These curved glass windows, with openings, create an interplay of reflections, bring more natural light into the interior spaces by eliminating the effects of the spandrels, and give new depth to the façade, revealed from the street as a huge pierced wall.

The project restores the original great heights and all the metal frames, some of which had been modified or hidden, by the creation of offices and sorting areas and the mezzanine dedicated to the reception of vehicles in particular. 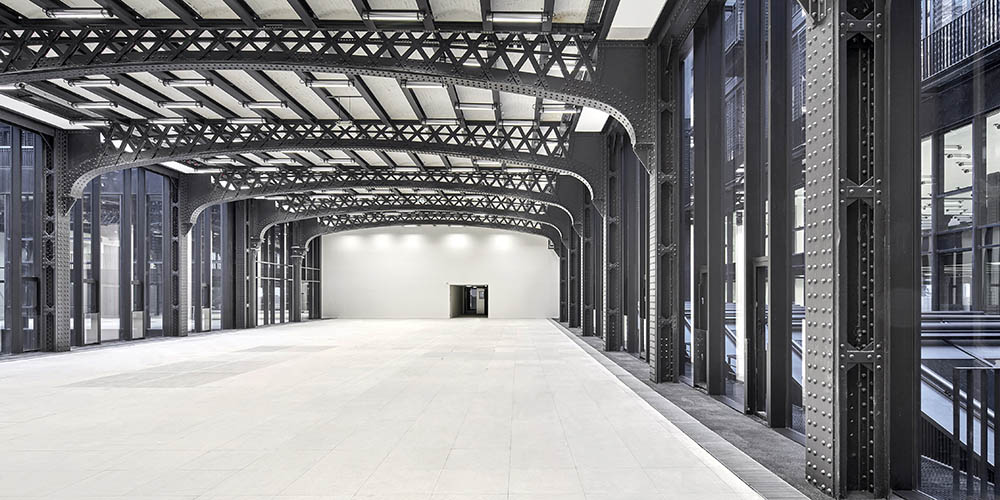 The parking lots are now placed in the basement, which now welcomes a second level created under the building. The restoration of the original metal structure – frameworks, capitals, porticos and vaults – highlights the structural quality of the steel construction and allows natural light to flood into the building. Freed from the constraints of its past industrial operation, the volume reappears in its large structures.

The primary structure of the existing building, with its metal posts and beams, is mostly restored and reused. A new self-stable structure, totally independent of the structure designed by Julien Guadet, is also introduced into the existing volume in order to support the new loads and to ensure the requirements of fire control on the levels concerned (particularly for the hotel).

The curtain walls, which envelop the entire periphery of the central courtyard, from the first floor to the second floor, allow for both overall homogeneity and a reading of the horizontal programmatic stratification of the project.

This glass architecture and the new skylights bring a maximum of natural light into the building for the various programs, including the large office areas, while creating the interplay of light and reflections.

The courtyard glass facades are organized in horizontal layers: on the first and second floors, the courtyard facades are composed of a curtain wall with aluminum joinery and double glazing. The double-height office sections facing the courtyard also benefit from zenithal lighting through glass “shed” type roofs.

Extra-clear glass provides the greatest possible transparency. External textile blinds are also installed on these windows to ensure better comfort. These large glazed surfaces have been carefully designed to meet the required objectives in terms of acoustic and thermal quality and fire resistance. 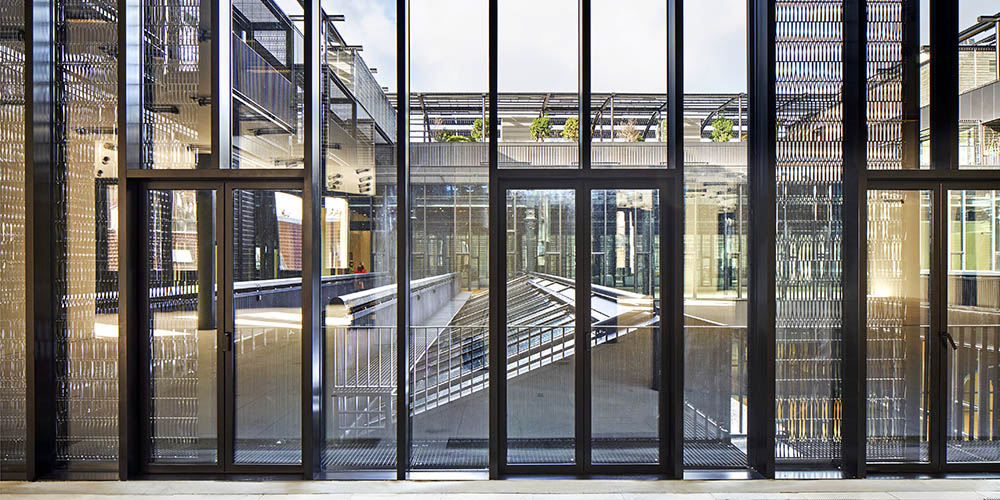 The new Poste du Louvre is a sustainable architecture witnessing to the evolution of postal activities.

The project goes beyond the regulations in force for this type of building, to achieve triple certification: NF- HQE Rénovation Excellent level, LEED Core & Shell Gold level, BREEAM Very Good level, completed by the Patrimonial Habitat and Environment labels for the apartments and Effinergie Rénovation for the entire operation.

Thermal insulation has been reinforced and all the exterior joinery has been replaced. Effective solar protection is provided thanks to integrated devices and facades; the air treatment installations allow for night over-ventilation in summer and will discharge the energy accumulated in the inertia of the building. All rooms with prolonged occupancy will have access to natural light and a direct view to the outside thanks to the massive use of architectural glass. The opening facades also allow for natural ventilation.

Rainwater will be recovered and reused for cleaning surfaces or watering planted surfaces. Previously totally mineral, the roof of the plot is now planted with a studied selection of plant species.

The project offers a connection to and supply by the urban heating (CPCU) and air conditioning (Climespace) networks of the City of Paris.