Can a single building change Londoners’ perceptions of what it means to live in a high-rise? That’s precisely what The Stratford sets out to do. The 42-story tower’s site may seem an unlikely one for a high-end residential tower—a former brownfield in a largely homogenous neighborhood. But the 2012 Summer Olympics, which was held within the neighborhood of Stratford, had put the area in the spotlight. The Olympics inspired a full-scale transformation that includes the creation of a £1.1 billion cultural center, new campuses for University College London and the London College of Fashion, and other cultural venues for the BBC, Sadler’s Wells Theatre, and the V&A Museum. The Stratford is at the center of this transformation—and brings something entirely new not just to the neighborhood, but to the city of London itself. 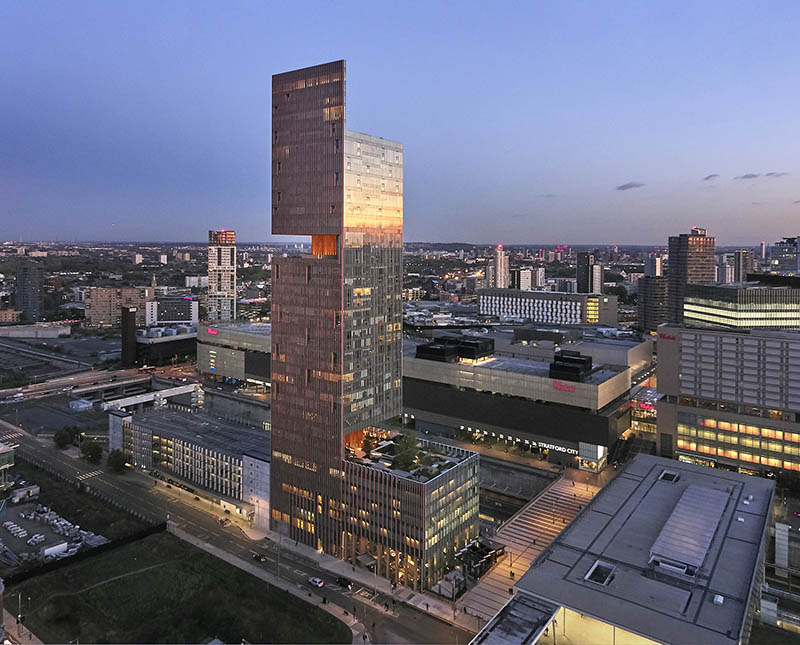 In a city known for ambivalent views of residential towers, The Stratford represents an ambitious model for urban living in a flexible, car-free, and public transport-driven community. It is located near the Stratford International station—one of London’s largest and newest transit interchanges—and for many, the building serves as a gateway to Stratford and plays a vital role in defining the image of the area. The vision and design brief also called for a building conceived as a vertical community that doubles as a modern neighborhood. 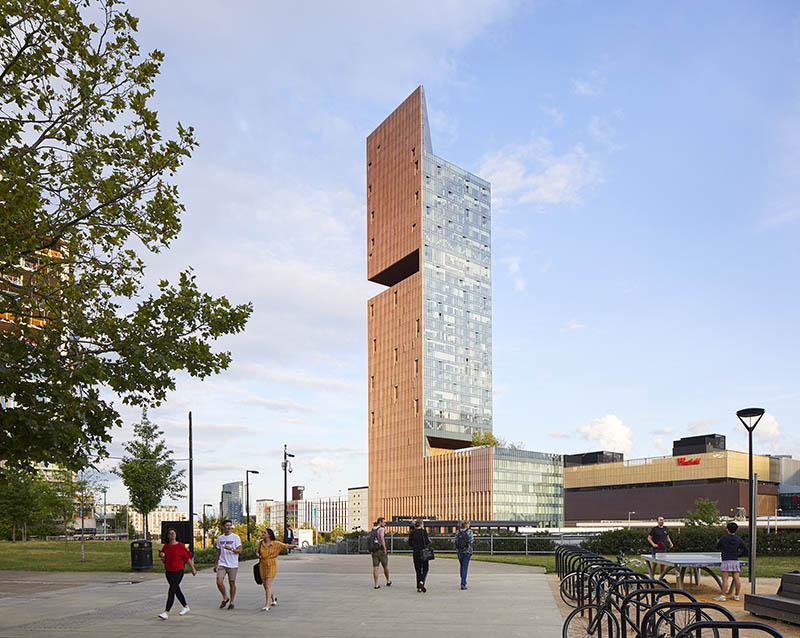 With a bold architectural design and structural engineering solution, the tower, at a glance, is far from typical. Two diagonal slices are carved out of the building, with residential levels cantilevered above. The deep cutaways are inset with landscaped outdoor spaces, or “sky gardens,” that punctuate the 143-meter-tall structure. These sky gardens are shared by the tower’s residents from its loft-style and single-story apartments. The residential units are no more than eight stories from the nearest shared open space, and the cantilevered design turns the garden levels into column-free vantage points—commons spaces with uncommon views. In addition, the building is more than an apartment block—it incorporates a five-star boutique hotel and two restaurants, a mix of uses that elevates The Stratford’s role as a social engine. 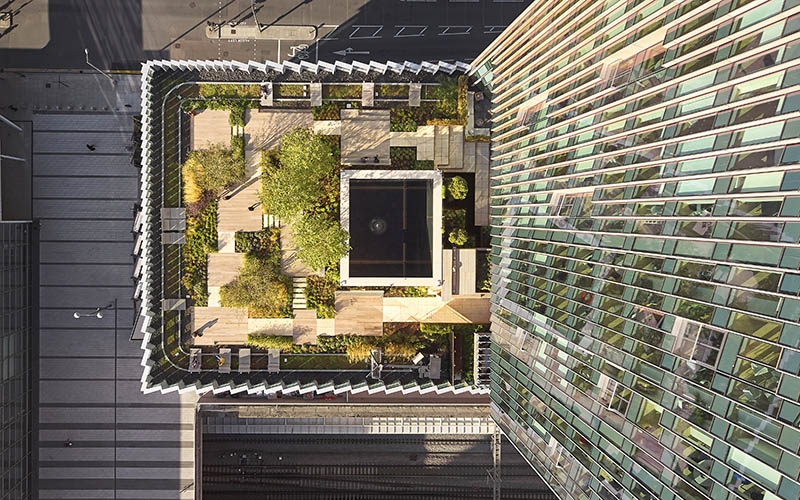 Achieving The Stratford’s double-cantilevered design was a balancing act. At the level of each sky garden, to open up expansive views, half of the perimeter columns are removed. Essentially, the building had the same challenges as a tree standing up with two gigantic notches chopped out of it. To reinforce the structure, the design team employed a hybrid solution. A structural steel truss rings the perimeter of the floor above each garden level, while a system of post-tensioned concrete connects the truss back to the concrete building core.

The close collaboration between architecture and engineering allowed for an integrated approach to design. This enabled the team to expose the building’s major structural elements and embrace the beauty of their inherent finish—negating the need for additional finishes to conceal the steel trusses and concrete shear walls, and reducing the volume of material otherwise required to finish the interior spaces.

For the residential units, the architect was inspired by the variety of living spaces found in some of London’s most vibrant neighborhoods. The design prioritized the wellbeing of its residents—embodying the ethos that not one size fits all. Individual needs, in terms of spatial configuration, volume of space, flexibility of layout, and desired lifestyle have all been embedded into the design through a diverse range of dwelling types that include overnight hotel rooms, industrial-style loft apartments, duplex townhouses, studios, and voluminous split level apartments. 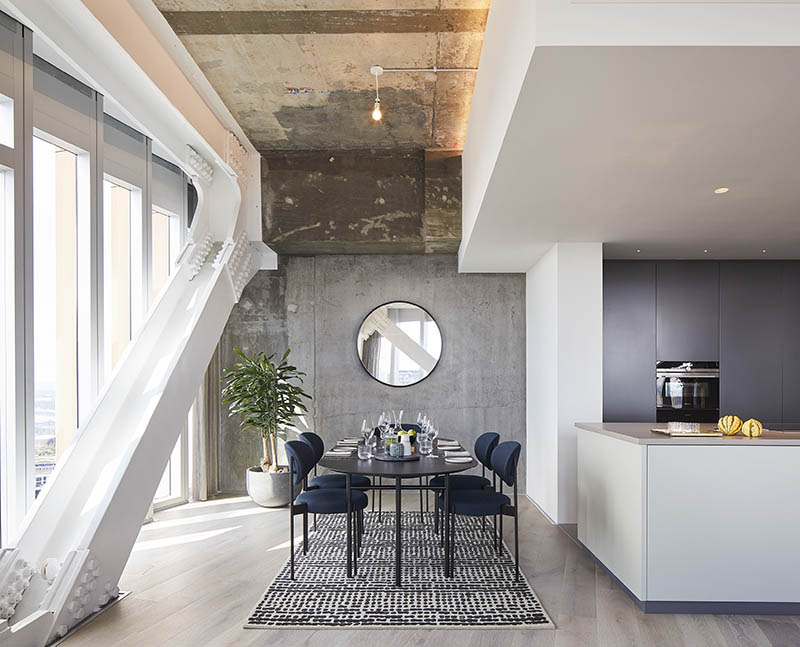 These interior spaces are enveloped by an intelligent facade design whose alternating solid and transparent verticals maximize daylighting and views while minimizing solar glare and overheating. The facade is also designed to address noise from the adjacent railways.

Each design decision also serves another purpose: creating a more sustainable building. Limiting the amount of construction material not only reduces costs but minimizes environmental impact. The distinctive facade design, with its mix of opaque and transparent materials, brings in abundant natural light. Even the sky gardens are part of a holistic sustainability strategy—with native plantings, feeders, and nesting boxes to attract birds, bees, and butterflies, these green spaces contribute to the district’s biodiversity. What’s more, the tower is also integrated into Stratford’s district-wide heating network—a scheme that provides a source of low carbon heating, hot water, and chilled water to the area. Through these measures and more, The Stratford has achieved high marks in sustainability with BREEAM Very Good certification and Sustainable Homes Level 4 certification.

Nearly ten years since The Stratford was first envisioned, London is seeing a new wave of vertical development. A recent survey from New London Architecture found that of the 541 tall buildings underway in 2018, 90 percent were residential. As high-rise living spreads across the city—not just in central London, but increasingly in its outer districts—The Stratford serves as an influential example for how to create a stronger sense of community within a tall building.

Skidmore, Owings & Merrill (SOM) is an influential collective of architects, designers, engineers and planners, responsible for some of the world’s most technically and environmentally advanced buildings, and significant public spaces. From a strategic regional plan to a single piece of furniture, SOM’s designs anticipate change in the way we live, work and communicate, and have brought lasting value to communities around the world. The firm’s approach is highly collaborative, and its interdisciplinary team is engaged on a wide range of international projects, with creative studios based across the globe.