The Garden House brings nature back to the city

The Garden House brings nature back to the city

Nicosia is currently Europe’s last divided city, with the northern (Turkish) and southern (Greek) sections separated by a UN buffer zone. This continuing division is central to the city’s ongoing problems, restricting development and creating complex problems for future planning.

Bringing nature back to the city is a growing imperative. As stated by Christos Pavlou Architecture, nominated for the European Union Mies Van Der Rohe award 2021, the city has failed to make greenery and communal public areas a priority in its urban planning despite there’s a government programme including incentives for developing private properties within the Nicosia and Ayios Dometios municipalities that are in close proximity to the Green Line. (source: Cyprus Conference) 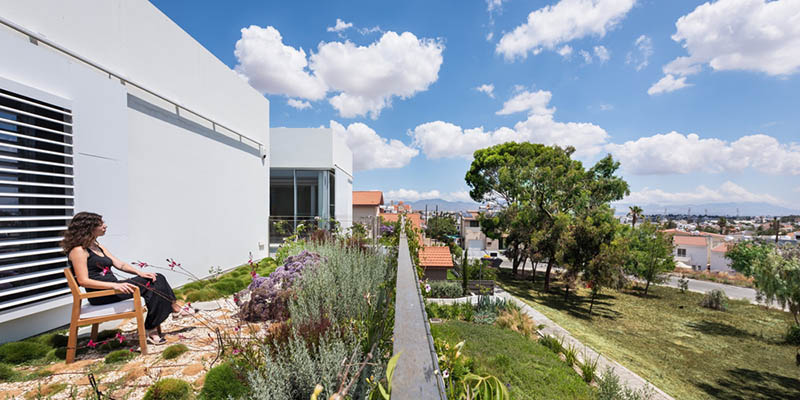 During lock-down we rediscovered the essential value of our houses, realising once again our need for more outdoor areas, balconies and rooftops to exercise and practise our hobbies.

The need to freely breakout to enjoy open-air spaces and connect with nature and neighbours has become more desirable than ever during the pandemic. But again the virus issue came only to emphasise what is already known through systematically forgotten and ignored, the urge to accelerate the process of incorporating nature in our cities in creative ways. 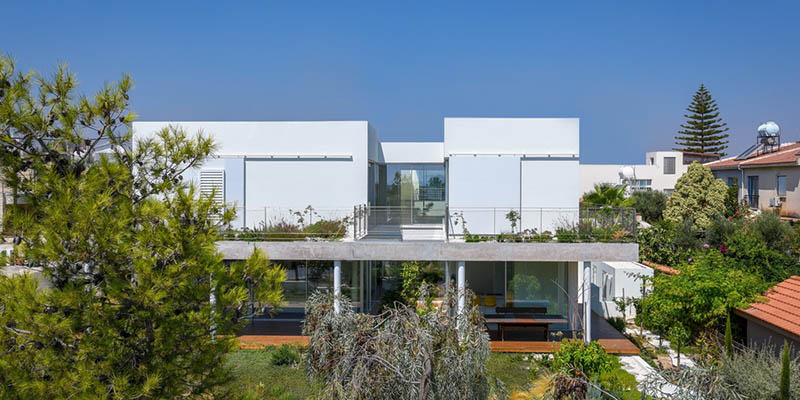 The Garden House by Christos Pavlou Architecture is a project inspired by the will of bringing nature back to the city, promoting shared spaces and social dialogue between the residents.

Christos Pavlou Architecture emphasised the potential for private urban gardens and the microclimates they create to improve living conditions within cities and slow global warming. 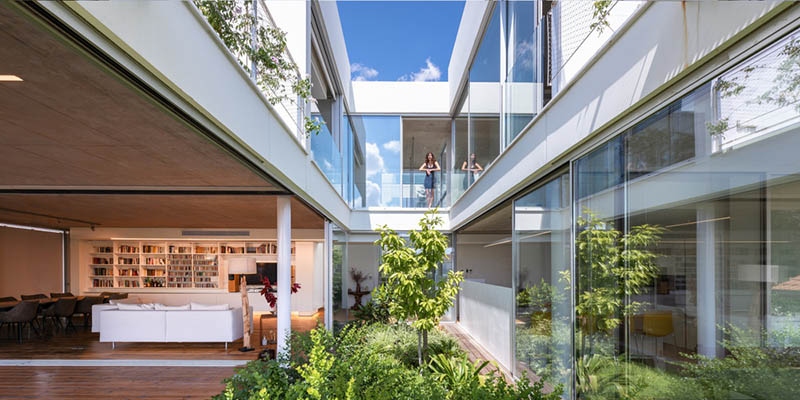 Not hiding behind fences and fully glazed on one side, our proposal aims to form a physical continuation of the adjacent public green area.  The house seeks to establish a unified relationship between the neighbourhood, the private garden and the public park.

Urban elements such as building, street and public space are not treated as absolute activities in isolation but as one single homogeneous configuration as the house becomes part of the park and the park is included in the house. 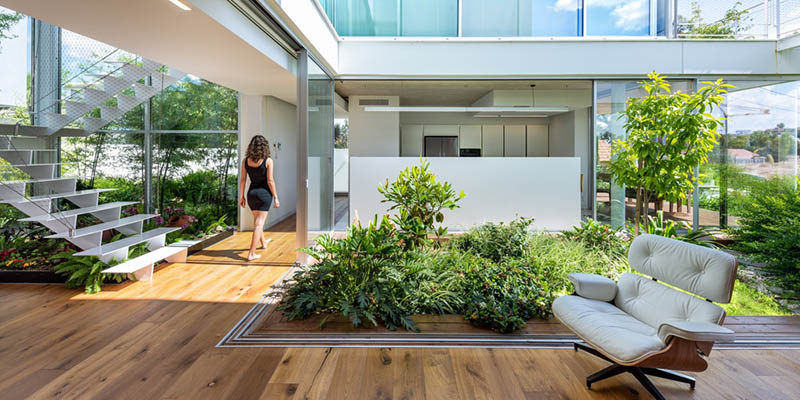 The integration of green areas into the house incorporates the planting of gardens on 60% of the ground floor, the use of green terrace on the first floor, the provision of bee-friendly landscapes and 40 kinds of native wildflowers.

All areas inside the Garden House flow on the outer spaces and are organized around a green central courtyard placed in-between two white cubic volumes.  Making space for nature in the city not only brings beauty to the urban fabric but encourages the return of local bird species and bees maintaining thus urban biodiversity; furthermore, it promotes human health and well-being. 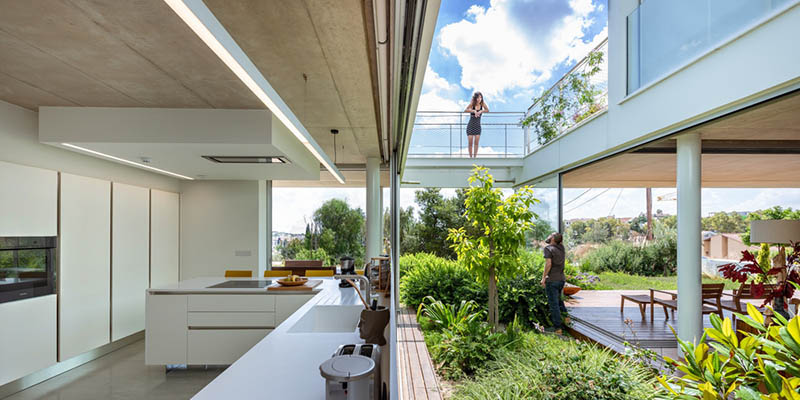 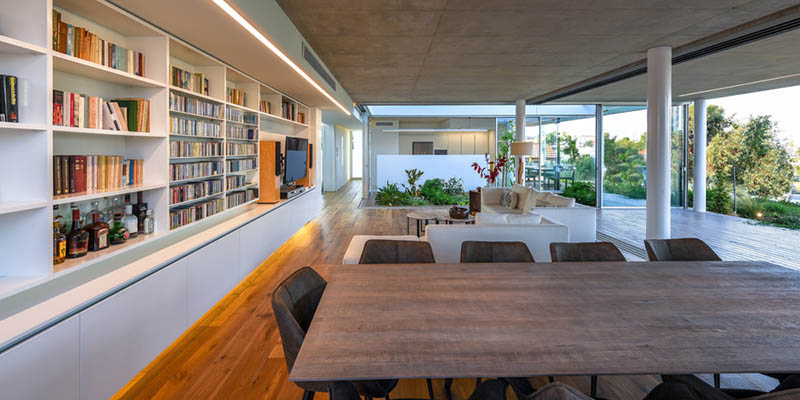 Welcome to ARCHIVIBE Your personal data (address or phone number, your user ID and password, e-mail address) are collected and processed by ARCHIVIBE for purposes strictly related to the proper use of the website and its information services, with information also provided by third-party advertisers. Your personal information may also be used in other processing operations, however, in a manner in line with these purposes. Your personal data is processed electronically and will be stored in a way that allows you to be identified for the time strictly necessary for the purpose for which the data was collected and subsequently processed and, in any case, within the limits of the law. To ensure that your personal information is always correct and up-to-date, relevant and complete, please inform us of any changes at: [email protected] Your personal information will not be disclosed to third parties for purposes not permitted by law or without your explicit consent. While using and browsing on our websites, some personal information may be collected automatically (by means of so-called "Cookie"), like, for example, the collection of the user's IP address and other information relating to browsing the website or the user's preferences expressed when choosing the services offered by the site. This information and data are collected directly and automatically by the web site and as part of its operational functions. Cookies serve different purposes. Cookies allow a site, for example, to: - Remember your login information - Offer you safe browsing after a login - Optimise the website performance by reducing the loading times of the pages you visit - Improve the user experience - Ensure a consistent appearance to the site - Remember the list of your favourite products - Remember the contents of your shopping cart - Remember the order at the moment of your arrival on the site - Allows you to use the "share" and "like" features - Send information to other websites for the personalisation of their advertisements Besides the cookies installed by the site, we use some third-party services that use external cookies. The purposes for which information is collected by these cookies are divided into the following types: > Analytical purposes, i.e. cooking serving to collect statistical information on the traffic and service use by the users, for example, how many visitors visited the site in a given period of time, which pages were visited, the duration of the visit etc.. This information is collected anonymously, and is not connected in any way with the personally identifiable information of the users who have visited the site. For this type of monitoring, we use the following third-party services: Google Analytics > Social sharing purposes. Some social networks may activate cookies for the proper functioning of their content sharing services. For example, when a site page contains a "share" or "like" button, the selected social channel establishes a direct connection to the site. The transmission of data to social networks is governed by the privacy policies and by the terms of use of the cookies of these companies, to which reference should be made for further information. Below is the list of social media networks used on the site: Facebook, LinkedIn, Instagram
<div class="to-top-container to-t