By the passion and commitment of Ernest Cognacq and his wife Marie-Louise Jaÿ, since its foundation, Samaritaine Paris Pont-Neuf became the go-to place to buy the trendiest dresses, dine at the aptly named Le Toupary or simply to see and be seen.

Cognacq and Jaÿ understood that the store had to be more than just a place to shop. It had to be a place of experiences.

With Frantz Jourdain and Henri Sauvage, their architects, from 1870 they invented an archetype, the world in a store where you could find everything. 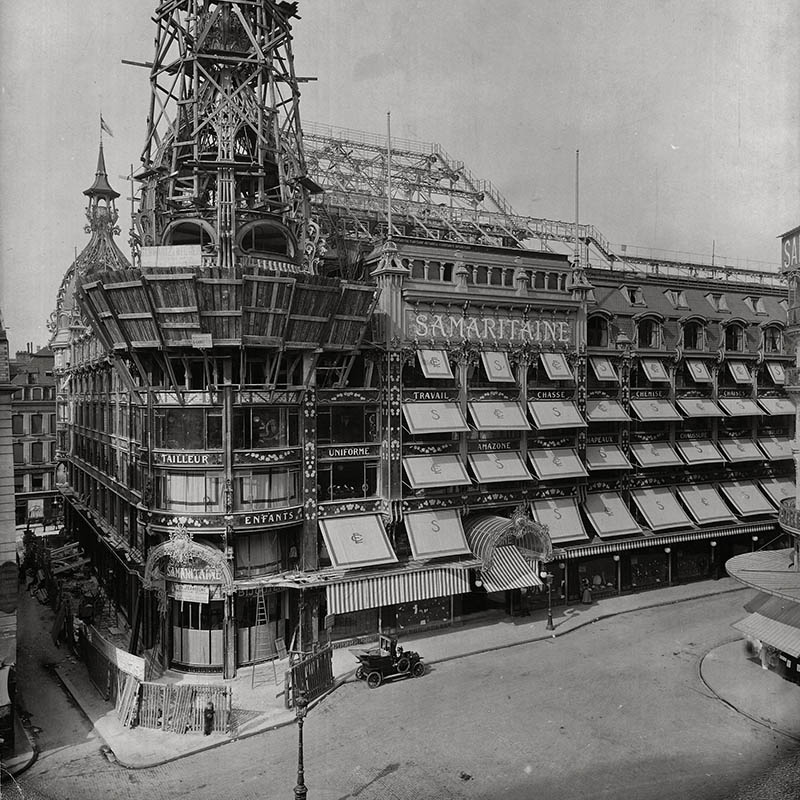 In 2005, for safety reasons, Samaritaine had to close its doors. The LVMH group, its new owner, then decided to launch an ambitious renovation as part of the Parisian neighborhood transformation into a green heart of the capital, partly pedestrianized and featuring space for art with the opening of many galleries.

LVMH entrusted DFS, the world leader in the sale of luxury products for travelers, with the design and management of Samaritaine Paris Pont- Neuf department store. For its first establishment in Europe in 2016, DFS relaunched Fondaco dei Tedeschi in Venice, Italy.

One hundred years later, with the great liner having reached the end of its tether, Bernard Arnault with LVMH took a gamble and brought it back to life with SANAA, the Japanese architecture firms founded by Kazuyo Sejima and Ryue Nishizawa. A master of its art, the Japanese architecture firm wielded the same weapon as Jourdain and Sauvage: creativity. 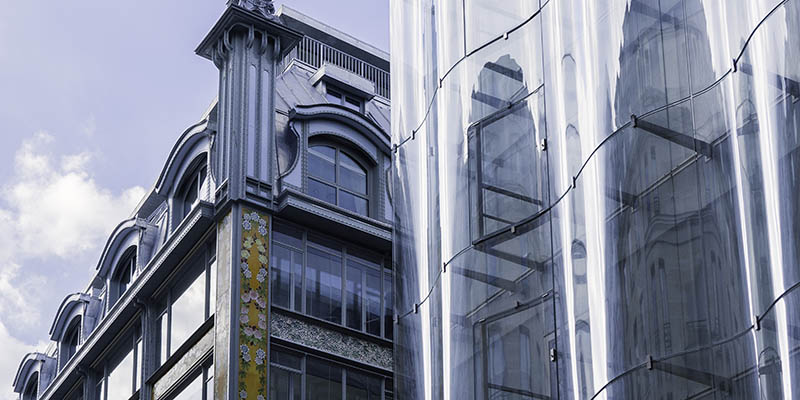 SANAA completely renovated the Art Nouveau building (now called Samaritaine Paris Pont-Neuf), created patios to bring in skylights and imagined a new structure whose undulating glass façade weaves a real dialogue between past and present in a subtle game of reflections with the buildings opposite.

The project also created a “passage de La Samaritaine”, a new street with social and commercial activities that run through the length of the existing building. It connects three full-height courtyards, one existing and two new: each is unique in design and together they create an alternating sequence of indoor activity areas and spaces that are open to views of the sky.

This new Paris passage is both a physical and figurative connection between the historical façade of the Sauvage building overlooking the Seine and the new façade we have designed for Rue de Rivoli.

“Our design for the Rivoli façade revitalizes the image of La Samaritaine. The soft waves of the glass echo the rhythm and scale of neighboring fenestration, establishing continuity along this busy commercial street. To further enhance the integration of the new design within its urban context the glass architecture reflects and transforms the surrounding environment, creating a subtle combination of the historical and the contemporary across its surface. Our intention is to establish a harmonious relationship between those parts that are renovated and those that are new.”
SANAA

Other than the undulating glazed façade, primary elements of this renovation project are the restored glass roof and its Eiffel structure by Francis Jourdain, the peacock fresco by Francis Jourdain surrounding the glass roof considered one of the masterpieces of Art Nouveau, the restored 675 linear meters Art Nouveau facade and the Grand staircase made of 16,000 gold leaves, the Art Nouveau ceramics and the 270 original oak steps. 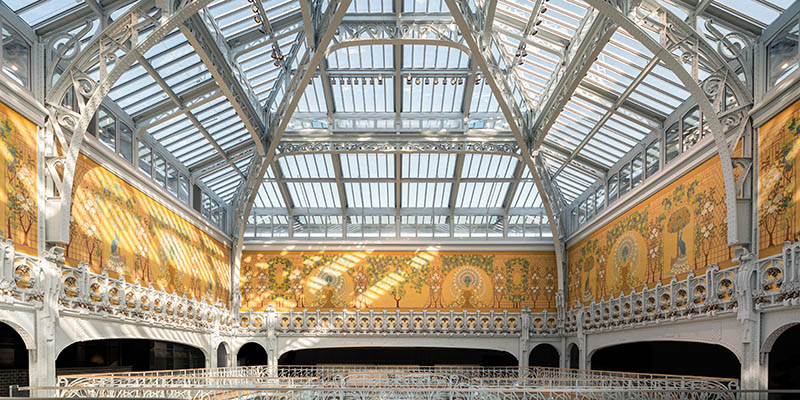 Any intervention had to be the subject of close consultation with the Ministry of Culture, via the DRAC Île-de-France. Hence La Samaritaine wished to involve a heritage architect as early as possible in this operation. Unlike Magasin 4, which is entirely new, the Magasin 2 programme had to adapt to the building so that the heritage elements were preserved while being brought into line with current standards and requirements.

Inside, we have revived all the splendour of the great hall—a true winter garden— by restoring paintings, false stonework, ironwork, stairs and taking advantage of the need to redo the glass canopy to recover the rhythm of the wooden grilles removed in the 1980s. Outside, the façades have regained their original appearance. Adorned with awnings and canopies, they display a true decorative enchantment: ochre-yellow enamelled lava stone, elegant lettering, ceramics and gilding, embossed copper, sculpted wood panels, all standing out again against the original grey-blue colour of the metal structure. (Jean-François Lagneau)

At Samaritaine, Canadian studio Yabu Pushelber highlighted the Eiffel structure and its luminosity while bringing their warm, refined style to all floors of the Pont-Neuf building outside the beauty floor: a dialogue between the historic façade and their contemporary approach. Visitors are invited to an intimate, friendly shopping experience, full of surprises and discoveries in the form of a chic Parisian stroll. In terms of materials, Yabu Pushelberg has chosen noble materials such as this terrazzo, a nod to Parisian cobblestones. The agency also designed the furniture and rugs tastefully coordinated with bronze and touches of emblematic grey-blue from the original decor. 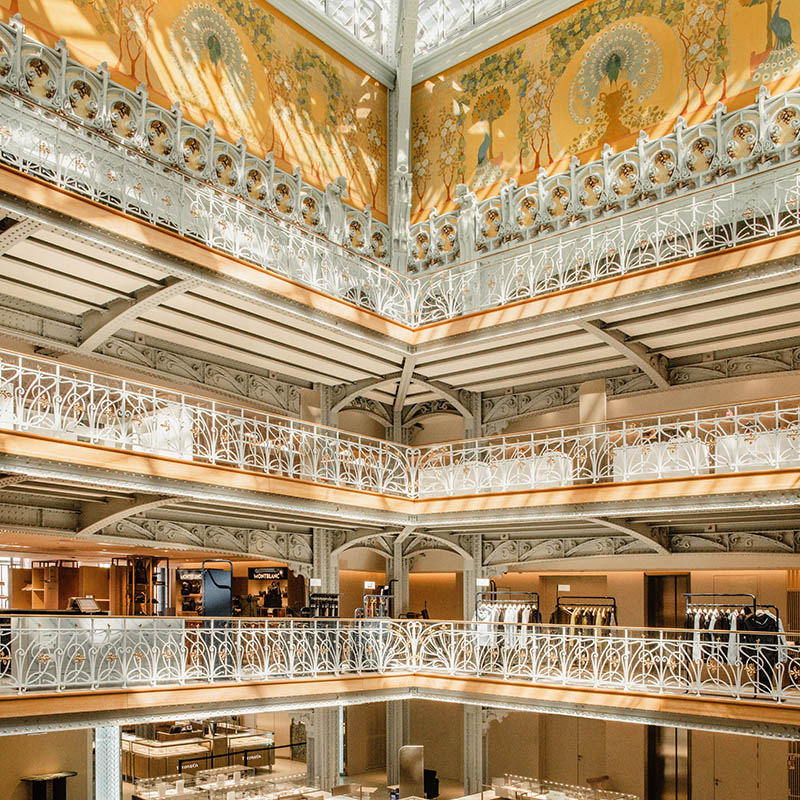 French architect Hubert de Malherbe designed the basement of the 3,200 m2 beauty area – the largest in Europe – which extends between the Pont-Neuf building and the one on the Rivoli side. He designed a city stroll inspired by Paris and the building’s Art Nouveau past, like the parquet, personalized mosaics on the floor, gilded brass structures reminiscent of floral greenhouses as well as nods to the Eiffel structure

French agency ciguë has imagined an avant-garde decor echoing the modernity of the concept store and streetwear offered on the Rivoli side. In the new glass setting, three floors are meant to be in tune with the times to appeal to Millennials. ciguë illustrated its approach, both artisanal and radical, using raw or recycled materials. A nod to Paris–Morris column- style structures, references to Haussmannian interiors and façades – usher the city into the store. 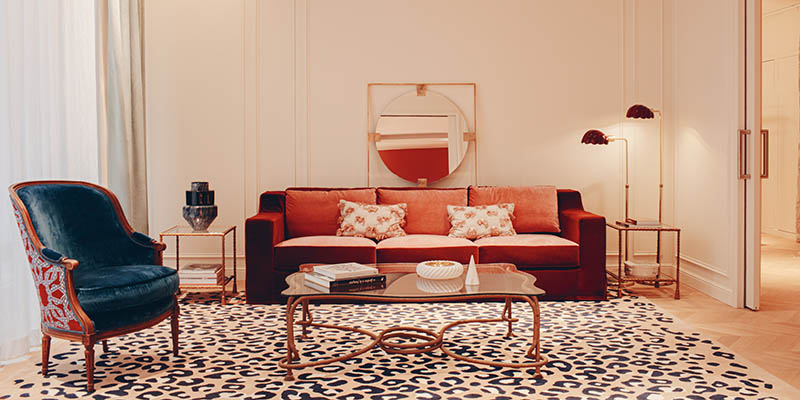 Interior designers Chloé Nègre, Karine Chahin and Virginie de Graveron got to know each other at India Mahdavi. Coming back together for Samaritaine Paris Pont-Neuf, the trio designed the spaces of the Apartment and the two private lounges dedicated to jewellery. Their inspiration? The motley style of Parisian apartments that mix classic French furniture and more contemporary codes like this colored leopard and these repurposed tailor’s tables. They also found some of the store’s furniture, including an 18th century wrought iron bed transformed into a bench on the 4th floor. 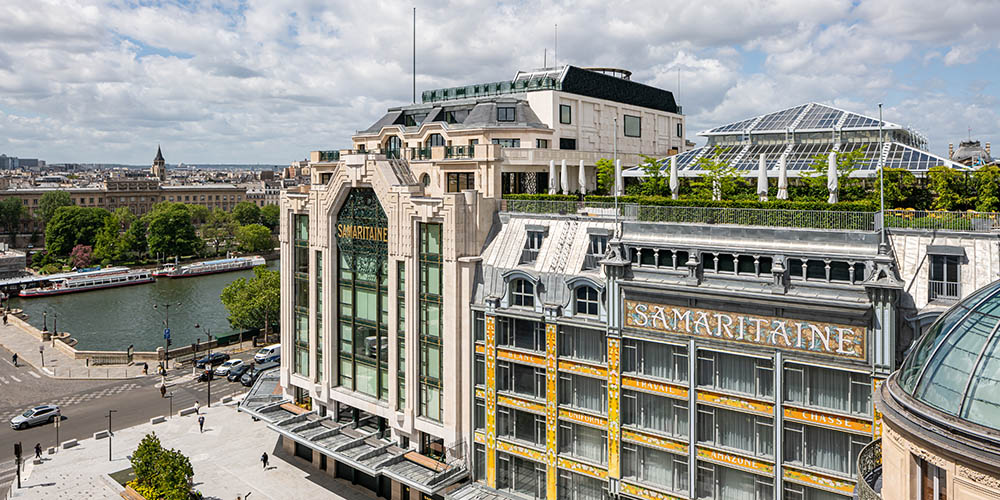 On the Seine side, there is now the Cheval Blanc Paris hotel in the Art Deco building originally created by architect Henri Sauvage. The hotel was designed by architectural firm Maison Édouard François.

The two restaurants on the seventh floor have terraces overlooking the Seine and a garden terrace skirting La Samaritaine’s glass roof to the north. A spa with a 30-metre-long swimming pool and a fitness centre has been built in the first basement.

Samaritaine Paris Pont-Neuf is part of a sustainable development approach since the entire building is certified with French and international labels ensuring the highest environmental quality: HQE, BREEAM, LEED and Quali- tel. Energy consumption is reduced thanks to the use of renewable energies.