The Scheunenviertel, part of the Spandauer Vorstadt district in Berlin-Mitte, is a trendy neighbourhood which is popular with the international fashion industry, mobile phone, electronics and IT companies, and creative start-ups and is known for its diverse range of restaurants and cultural offerings.

At Rosenthaler Strasse 43-45, directly opposite the Art Nouveau ensemble of the Hackesche Höfe, a modern, three-part, new building has been erected using reinforced-concrete construction. It has seven storeys above ground, two basement levels, and a gross floor area of 15,000 sqm.

It picks up on and complements the surrounding neighbourhood’s mix of residential, commercial, and office functions. The varied, detailed façades of the three buildings are a direct reference to the historical parcelling of the building site.

In house 44 an Apple store opened in December 2021. Each of the three buildings has generous retail spaces in its basement and on its ground floor. Above the commercial units in houses 44 and 45 are offices and one- to three-room apartments of between 40 and 100 sqm. House 43, on the other hand, is entirely given over to offices and commercial spaces. 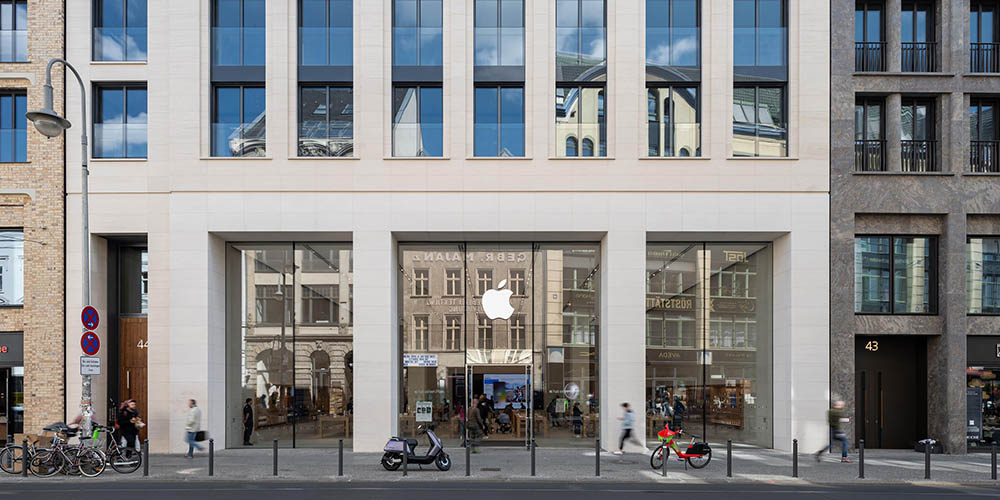 The setback storey on the sixth floor has roof terraces that are separated from one another by frameless glass elements. The two courtyard-side roof terraces also feature green pergolas. 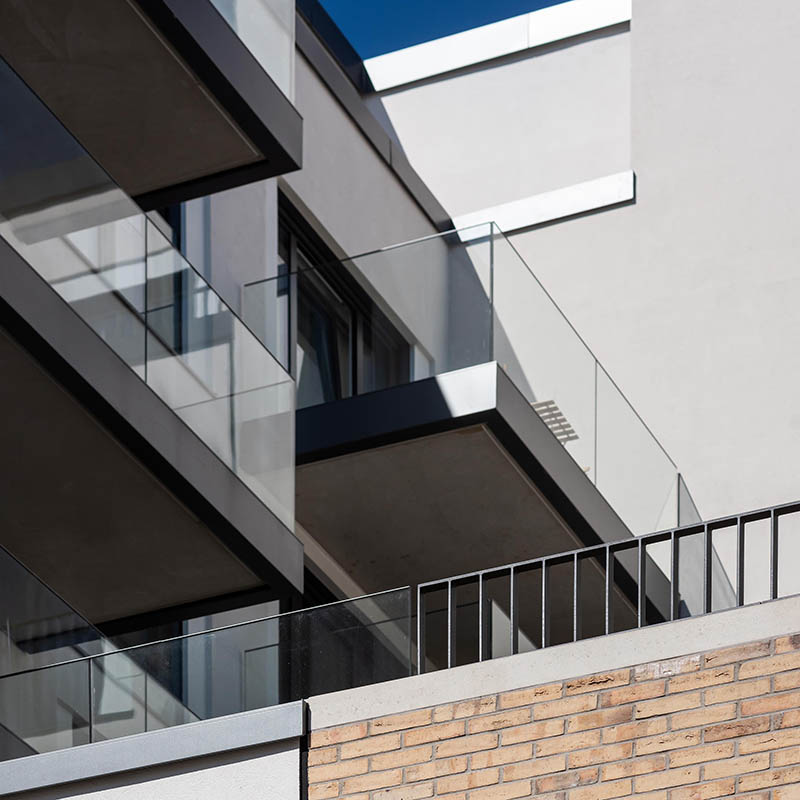 Their different street façades give the Rosenthaler Strasse 43-45 ensemble’s three building units the appearance of distinct and disconnected works of architecture.

On the other hand, they blend in architecturally with the old and new façades of the adjacent buildings, and their elaborate design and high-quality materials give the entire block a completely new quality and dynamism.

House 43, for example, has a vertically oriented façade of grey Kohlplatter shell limestone. A natural stone from near Kirchheim in Baden-Wuerttemberg, Kohlplatter has distinctive rust-brown marbling. This façade is articulated by supports and semicircular pilaster strips. 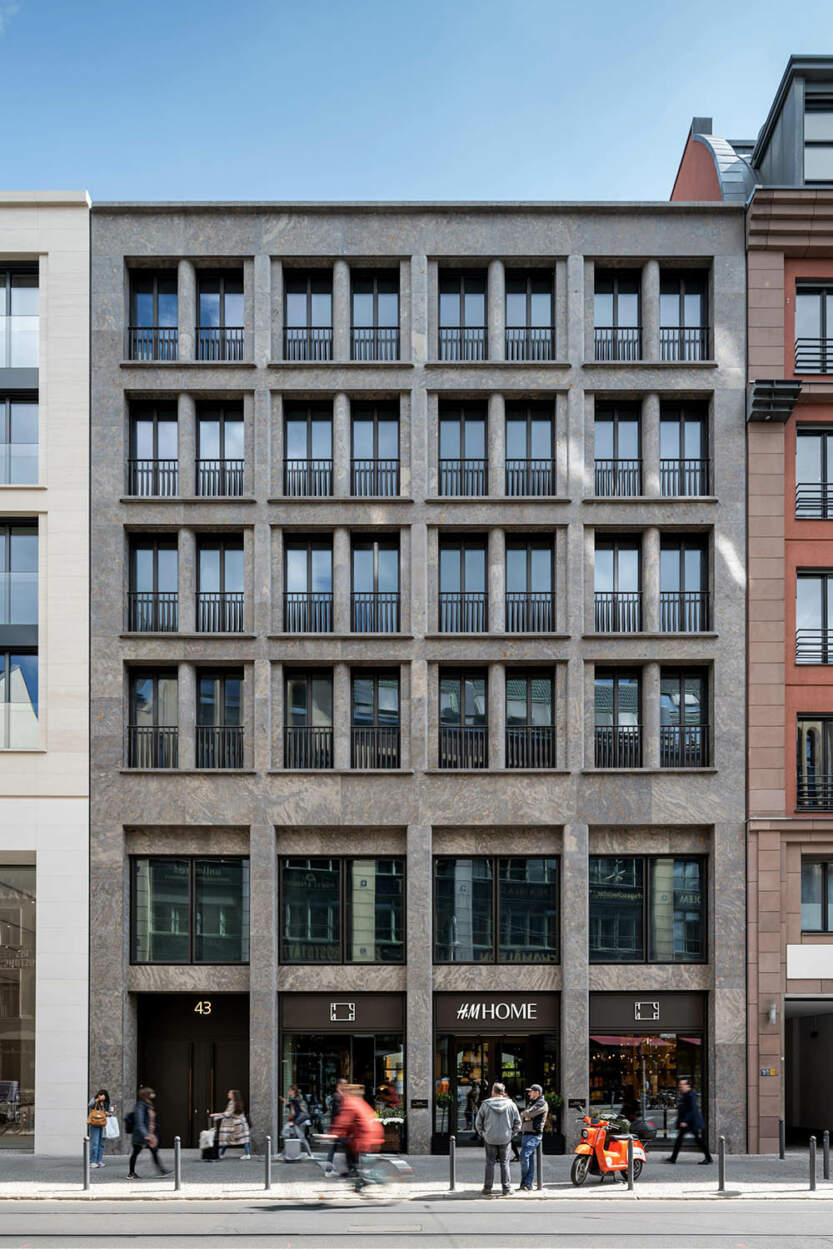 The floor-to-ceiling windows are fitted with brown, powder-coated steel-bar railings from the second floor upwards. 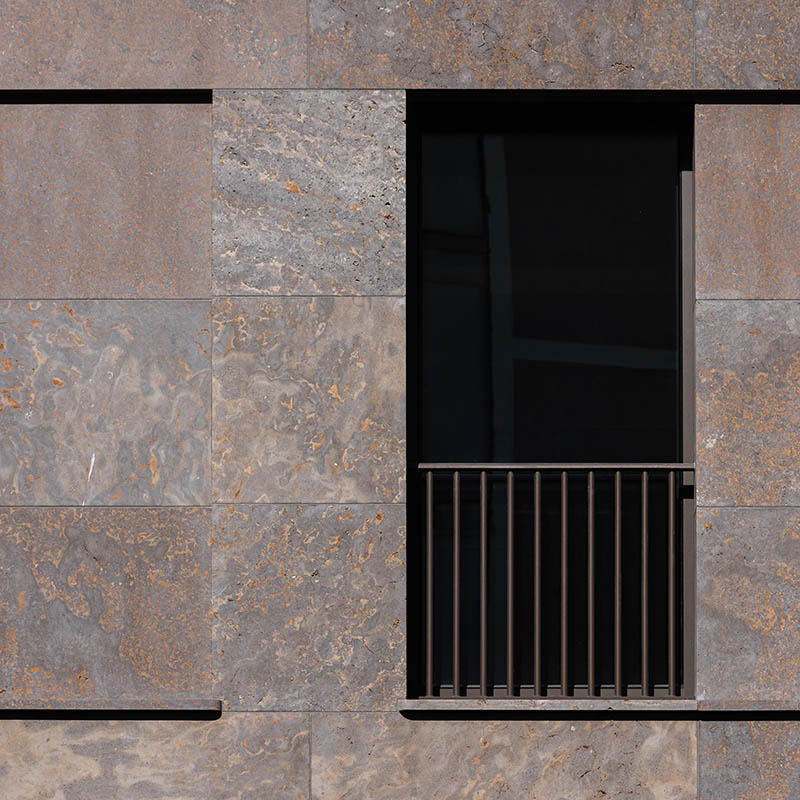 The façade of house 44 is of light-coloured, horizontally banded natural stone from Portugal, also vertically structured, but this time using supports alone. 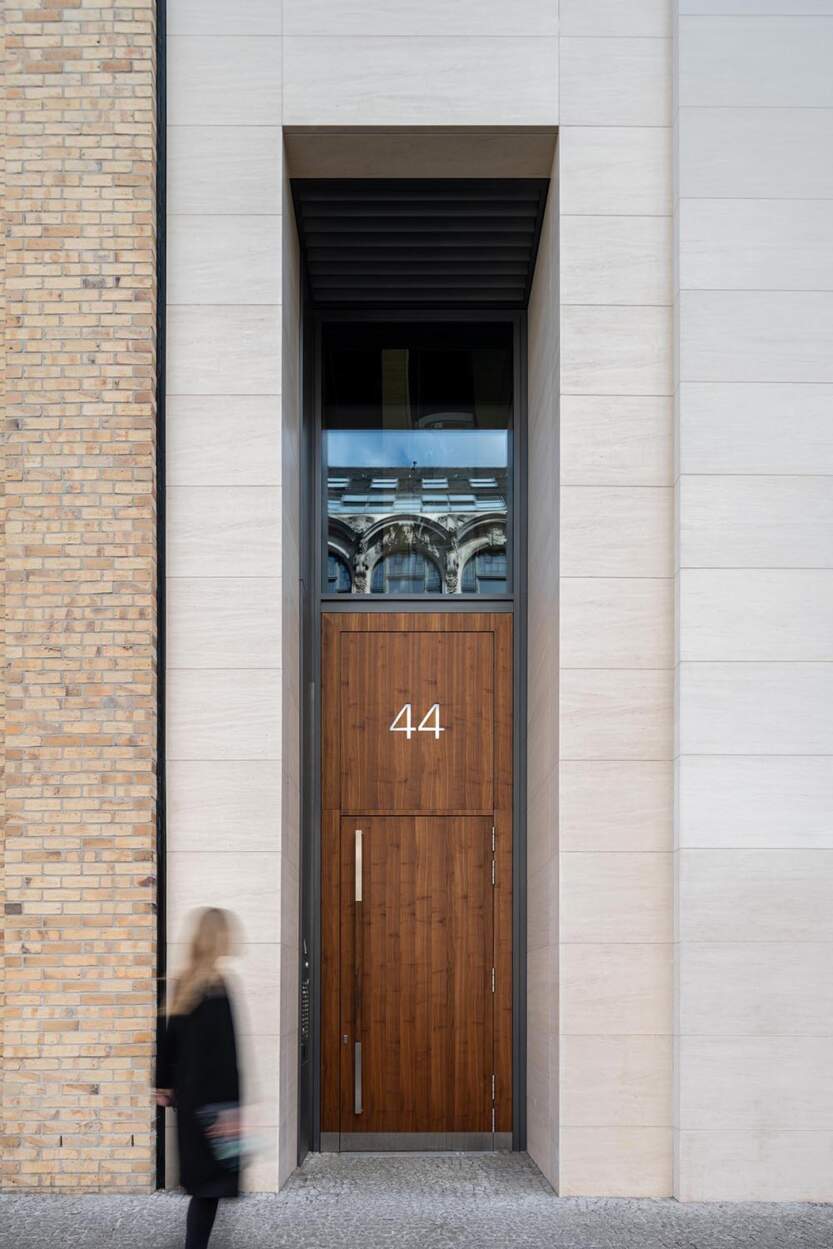 The windows, like the windows of house 45, have glass parapets.

House 45 stands out from the other two buildings thanks to its façade of light-coloured clinker bricks. 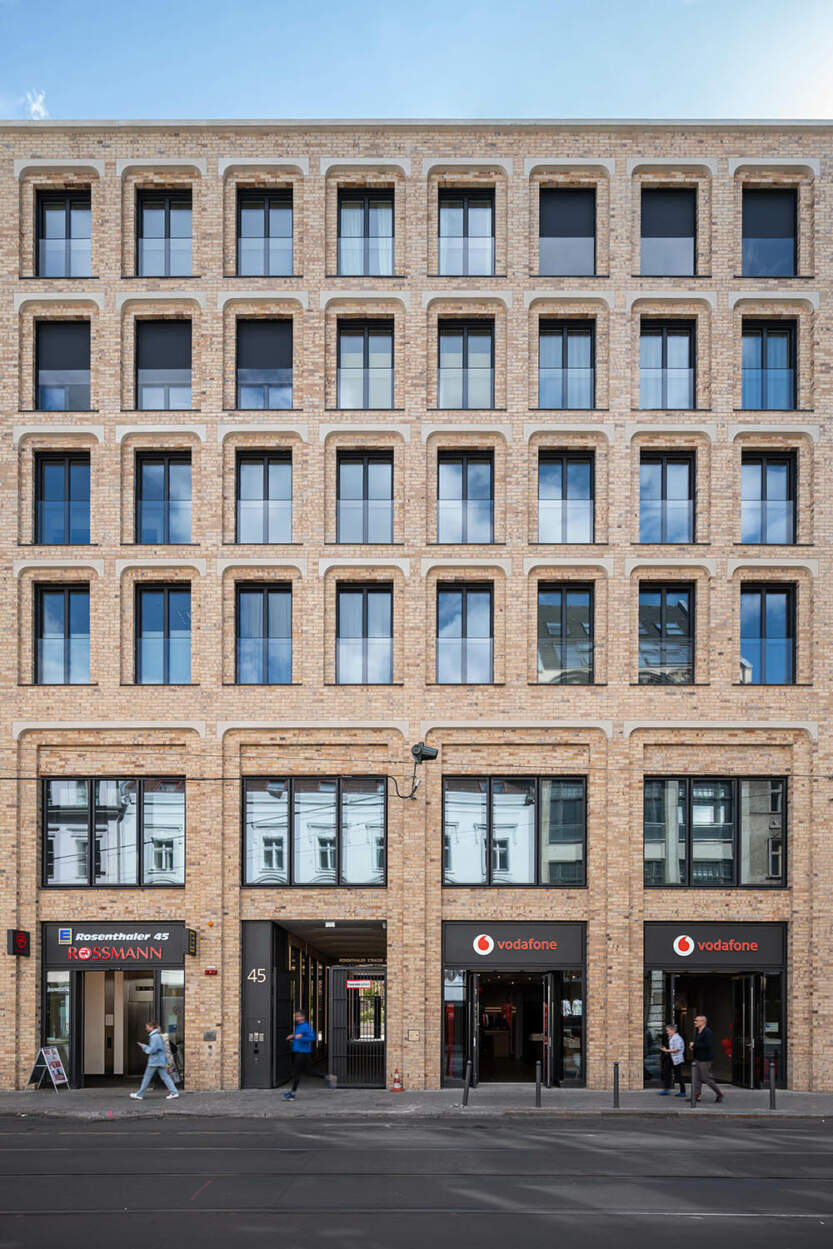 At the same time, it alludes to the façade design of the adjacent listed historical building, the Rote Apotheke (a pharmacy). An additional articulating element is lintels of light-coloured architectural concrete above the windows. 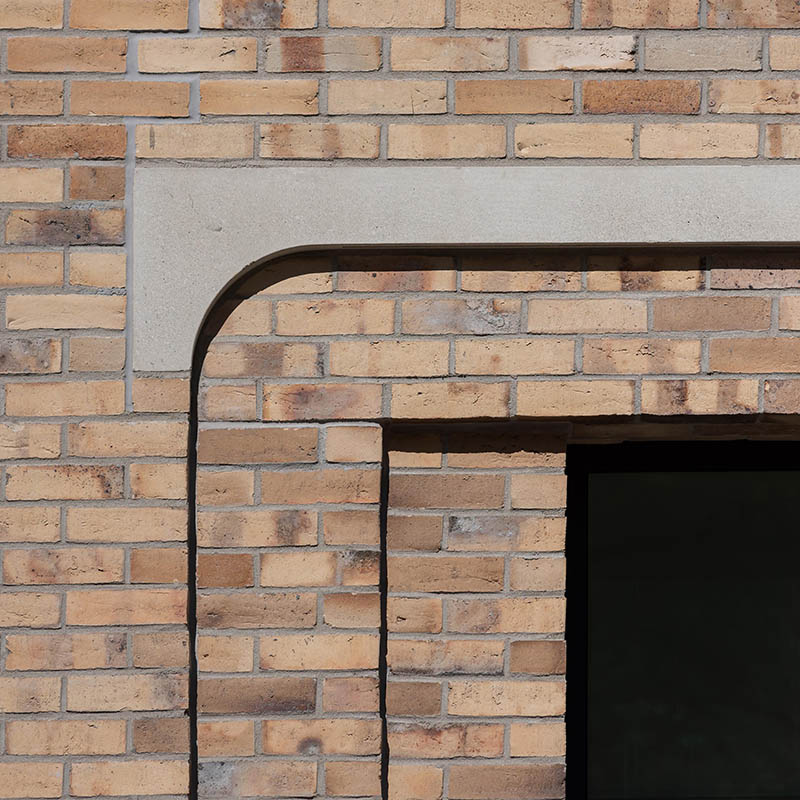 The courtyard façades are more discreet, in keeping with the Berlin building tradition, but at the same time of high-quality design. They have a composite thermal insulation system overlaid with a layer of fine-grained plaster.

From the second floor upwards, all buildings have felted plaster flaps as window frames. 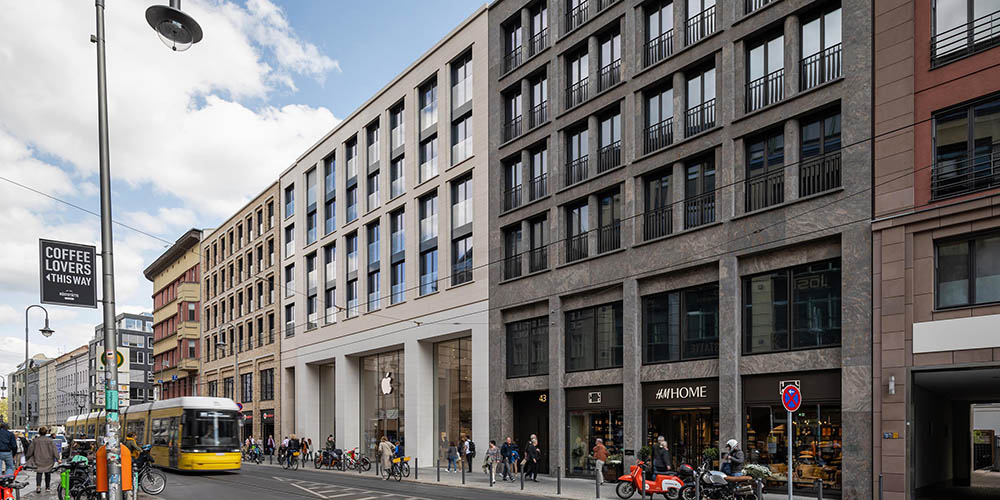 To absorb rainwater and provide a habitat for a wide variety of insects and birds, all roofs, including waste areas, are greened. A cistern has been installed to reuse rainwater. 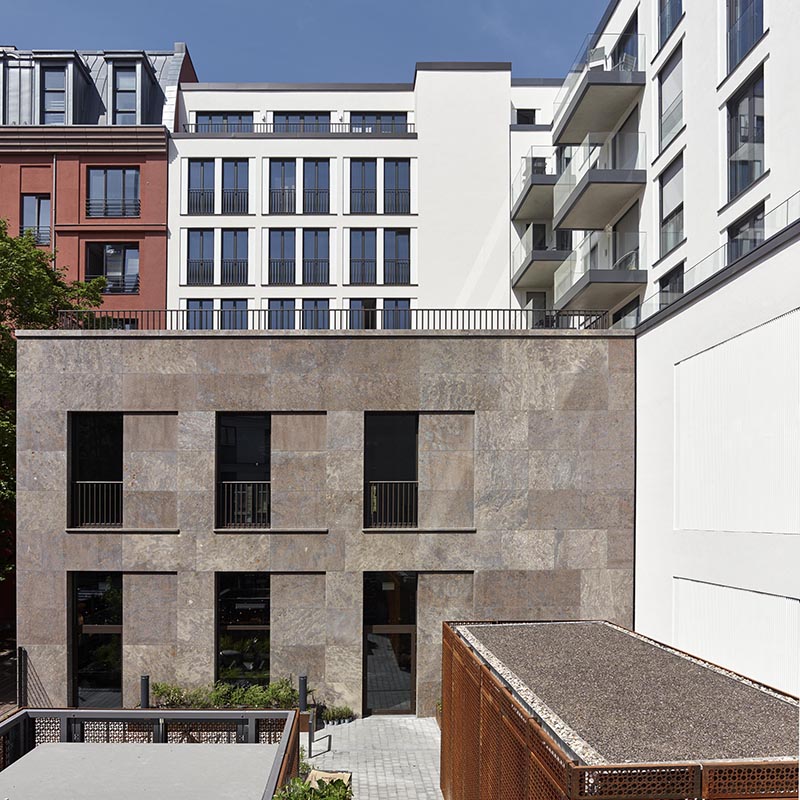 The landscaped inner courtyard has a 200-sqm children’s playground and numerous parking spaces for bicycles. Parking spaces and technical areas are separated by a privacy screen of Corten steel panels. These have a punched pattern developed specially by Tchoban Voss Architekten.

Photography: Ilya Ivanov except where mentioned