Photographer’s home in a Water Tower by Tonkin Liu

Photographer’s home in a Water Tower by Tonkin Liu

Tonkin Liu has transformed a disused water tower into a delightful family home of inventiveness in Norfolk, UK.

As evidence of the goodness of the project, the Tower House has been recently awarded with the Structural Timber Awards: ‘Custom / Self Build’ Project of the Year 2020, AJ Retrofit Award House of the Year: House over 500k 2021, RIBA East Award 2021, RIBA National Award 2021 and RIBA Stephen Lawrence Prize 2021.

The Water Tower had been relocated from a local airfield after the war and had become a popular landmark with villagers, many of whom had climbed it during their youth. Bidding against scrap metal dealers the tower was bought by the client in an auction. 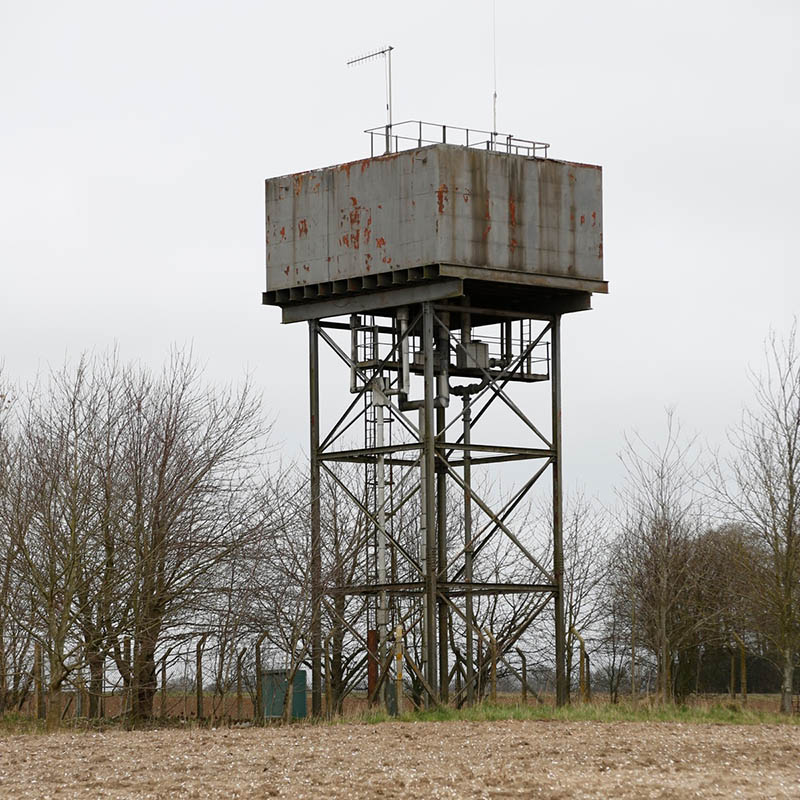 As part of the living history of Castle Acre, the disused structure’s preservation and reuse as a home drew great support from the local community. 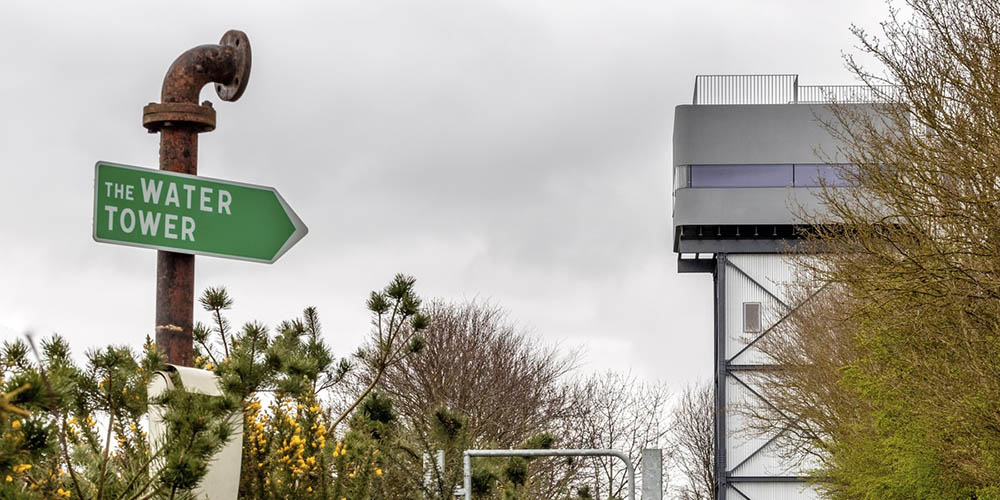 The steel tank has become a living room, the steel frame has been infilled to provide sleeping chambers with a ground floor entrance and recreation area and a new tower has been added for access and to stabilise the delicate structure that swayed in the hilltop wind. 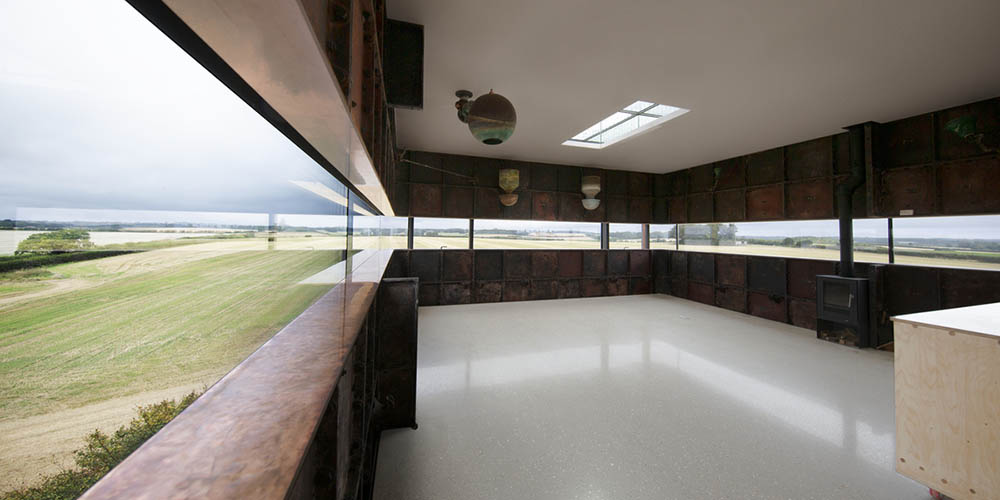 The rusty panelized steel tank has been retained and transformed with a panoramic window.

Above and below the ribbon window steel trusses works in tandem with the existing steel panels to open the tank to an expansive view of the flat horizon.

The support for the upper trussed panel is disguised by the frames of the opening portions of the ribbon window. A single skylight surround by mirror will bring light from every direction into the living dining and cooking space. 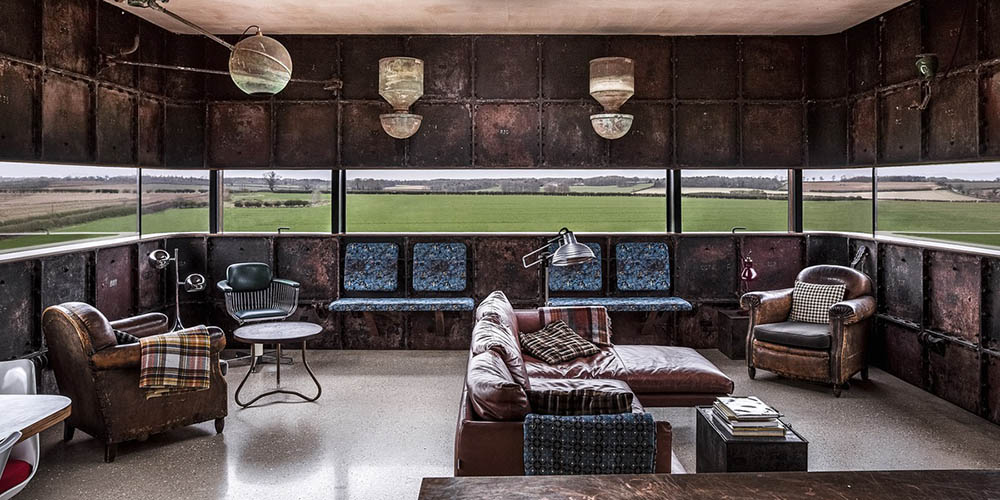 Below the tank the existing steel frame structure is infilled with a prefabricated cross laminated timber structure.

The timber cube like sleeping chambers are fully glazed on the north elevation to minimize light pollution to the village to the south and to overlook a vast field of barley that becomes a vast rural phenomenon as it is seen from above as it sways in the wind.

The tall chambers that correspond to the frames proportions also contains a washroom and wardrobe with a mezzanine over. Small window to the east and west provide cross ventilation and castle like observation. 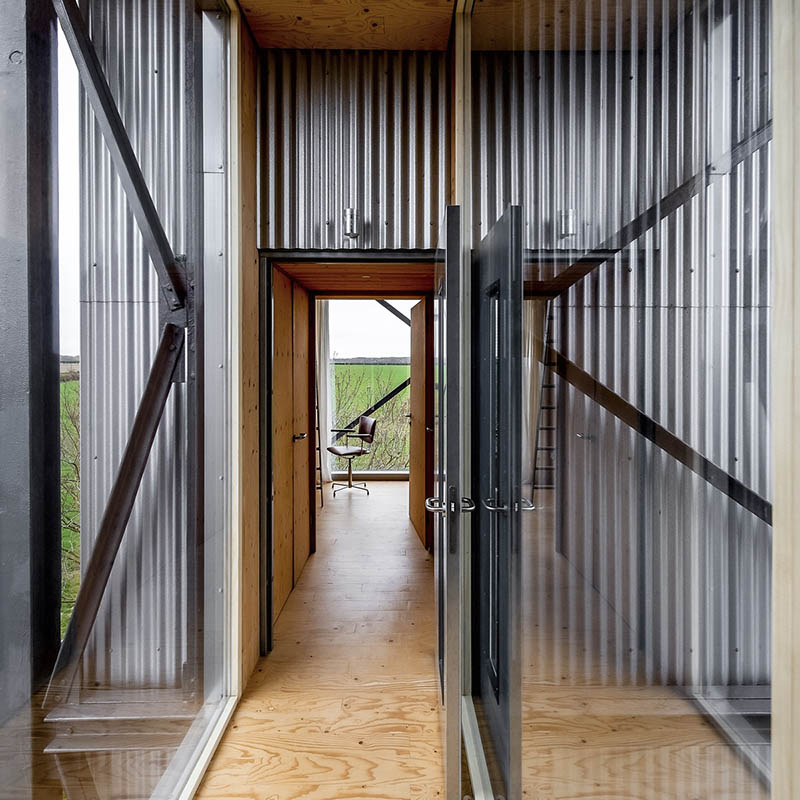 A bridge connects the sleep chambers to the cross laminated stair tower. The bridge is fully glazed to its sides to connect the occupants to the treetops of the line of trees that extend to the east and west. The bright and open space feeds natural light into the height of the enclosed stair tower. 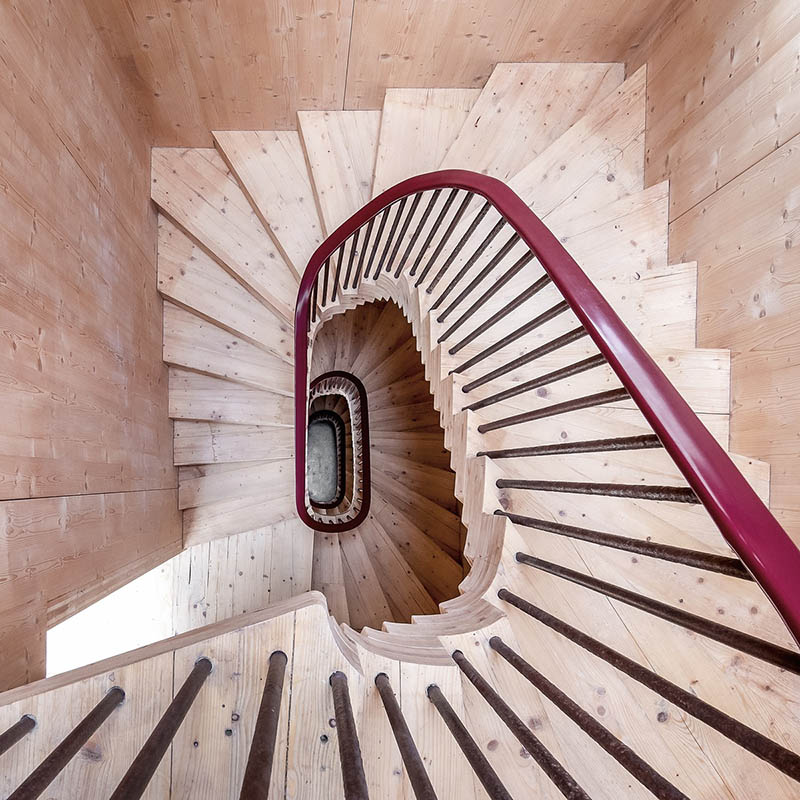 The compression spiral delivers wind loads to the foundations and minimizing the thickness of the cross laminated timber walls. From below the double tread spiral can be seen leading towards an ovoid skylight that fills the dark vertical shaft with top light. 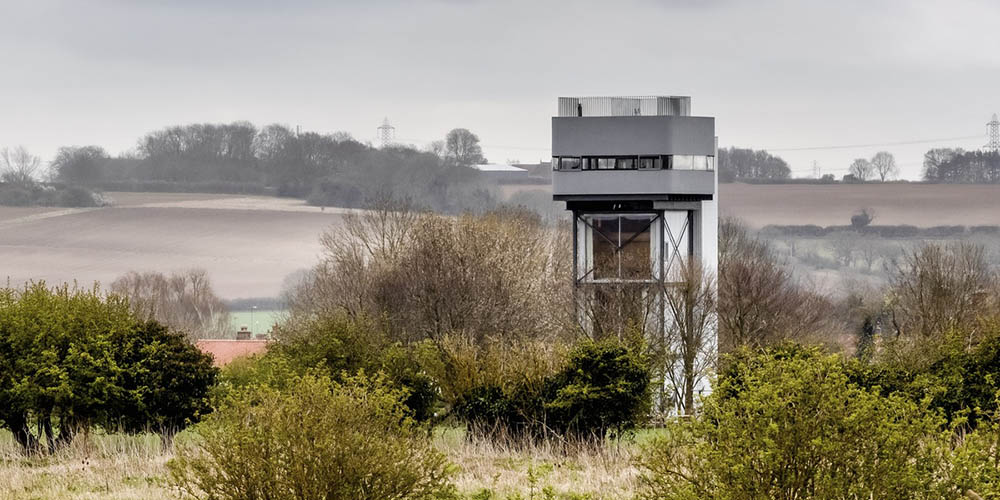 The soft light illuminates the rusty iron balusters that have been formed from recycled tie rods that pulled together the sides of the water tank.

The Water Tower by Tonkin Liu is an example of how a disused structure can be given a new sustainable life through intelligent design, carefully and diligently applied by a committed and wise client.