MEETT by OMA, the Toulouse’s new Exhibition and Convention Centre

MEETT by OMA, the Toulouse’s new Exhibition and Convention Centre 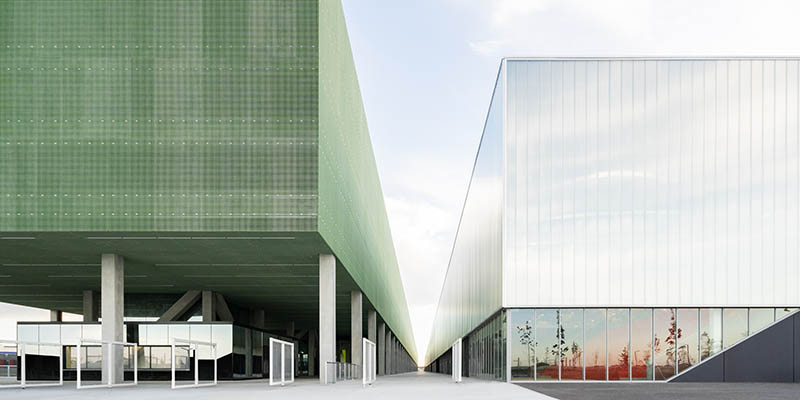 The 155,000 m2 project incorporates 7 exhibition halls, 25000 m2 outdoor, a convention centre, a multi-function event hall, a car park silo for 3,000 cars and a transportation hub with a new tram station. 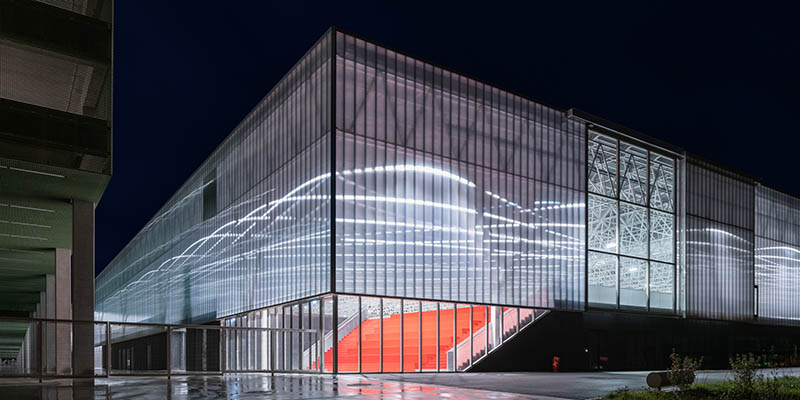 The masterplan of MEETT has been conceived as an active strip – ‘une bande active’ – forming a physical border between urban development and countryside, with the ambition of becoming the central spine for an integrated development of the city and the countryside. 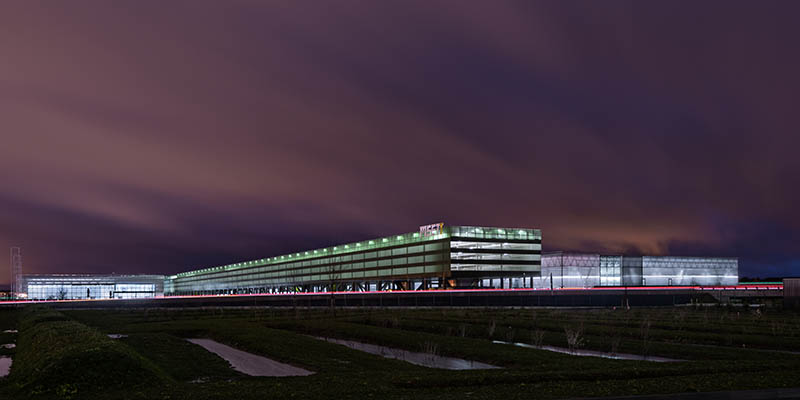 The program of the exhibition and convention centre is organized into three parallel bands: an approximately 700-m long exhibition hall to the north; a reception and circulation zone below a car park silo in the center; and a convention centre with a multi-function event hall to the south. Outdoor public spaces, which will become accessible not only for convention visitors but also for the general public, are woven in between the three expo buildings, creating a connection between the centre and the surrounding landscape. 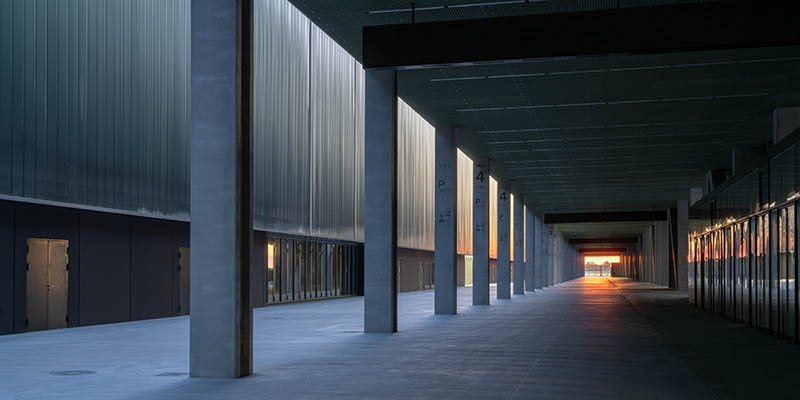 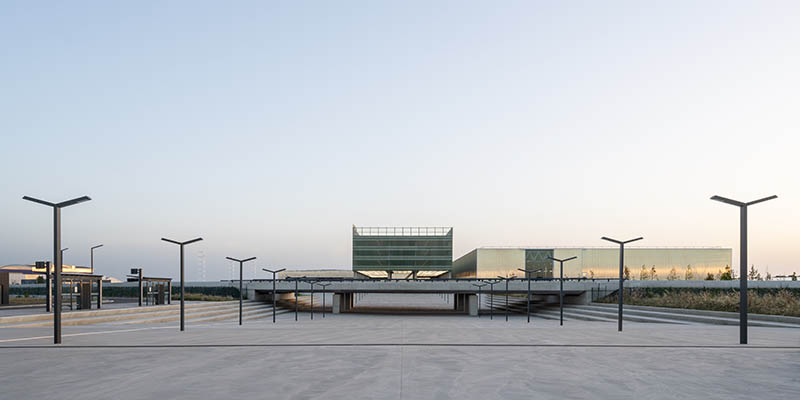 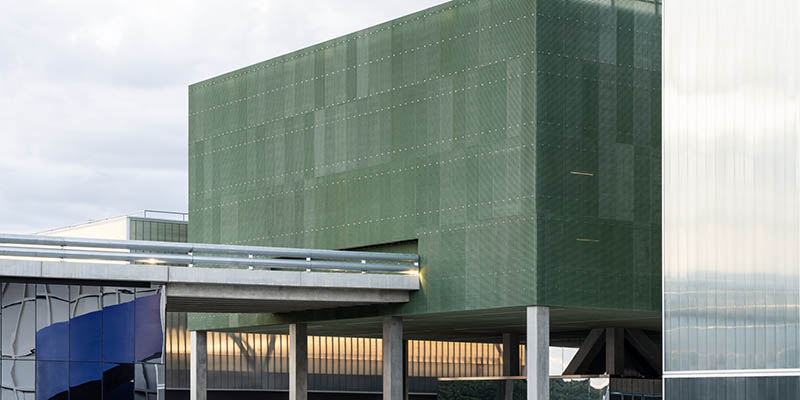 The urban context as well as the program of MEETT require the project to function as a logistical machine.

“This project was an opportunity to develop an architectural design which relates to all scales. The masterplan is inspired by the efficiency of the surrounding infrastructure, the openness and horizontality of the rural occitanic landscape and the scale of the adjacent hangars, while each of the individual buildings is designed as a unique functional and flexible machine.” says OMA Partner, Chris van Duijn. 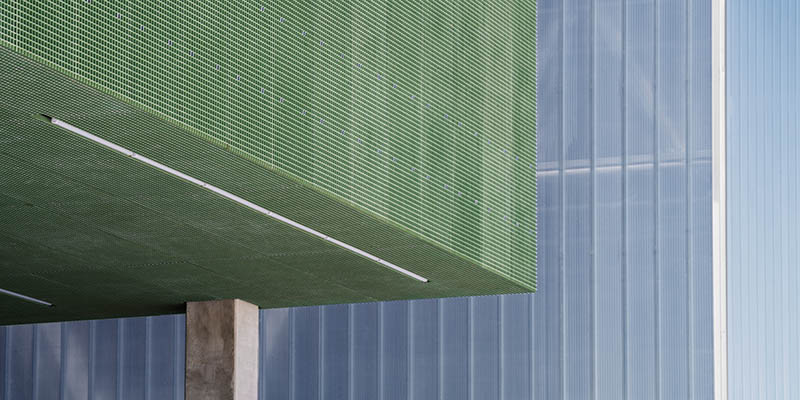 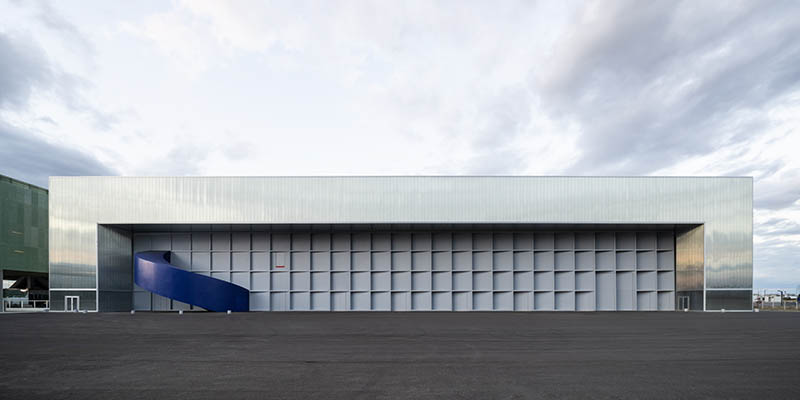 Welcome to ARCHIVIBE Your personal data (address or phone number, your user ID and password, e-mail address) are collected and processed by ARCHIVIBE for purposes strictly related to the proper use of the website and its information services, with information also provided by third-party advertisers. Your personal information may also be used in other processing operations, however, in a manner in line with these purposes. Your personal data is processed electronically and will be stored in a way that allows you to be identified for the time strictly necessary for the purpose for which the data was collected and subsequently processed and, in any case, within the limits of the law. To ensure that your personal information is always correct and up-to-date, relevant and complete, please inform us of any changes at: [email protected] Your personal information will not be disclosed to third parties for purposes not permitted by law or without your explicit consent. While using and browsing on our websites, some personal information may be collected automatically (by means of so-called "Cookie"), like, for example, the collection of the user's IP address and other information relating to browsing the website or the user's preferences expressed when choosing the services offered by the site. This information and data are collected directly and automatically by the web site and as part of its operational functions. Cookies serve different purposes. Cookies allow a site, for example, to: - Remember your login information - Offer you safe browsing after a login - Optimise the website performance by reducing the loading times of the pages you visit - Improve the user experience - Ensure a consistent appearance to the site - Remember the list of your favourite products - Remember the contents of your shopping cart - Remember the order at the moment of your arrival on the site - Allows you to use the "share" and "like" features - Send information to other websites for the personalisation of their advertisements Besides the cookies installed by the site, we use some third-party services that use external cookies. The purposes for which information is collected by these cookies are divided into the following types: > Analytical purposes, i.e. cooking serving to collect statistical information on the traffic and service use by the users, for example, how many visitors visited the site in a given period of time, which pages were visited, the duration of the visit etc.. This information is collected anonymously, and is not connected in any way with the personally identifiable information of the users who have visited the site. For this type of monitoring, we use the following third-party services: Google Analytics > Social sharing purposes. Some social networks may activate cookies for the proper functioning of their content sharing services. For example, when a site page contains a "share" or "like" button, the selected social channel establishes a direct connection to the site. The transmission of data to social networks is governed by the privacy policies and by the terms of use of the cookies of these companies, to which reference should be made for further information. Below is the list of social media networks used on the site: Facebook, LinkedIn, Instagram
Go to Top
<script async src="https://www.archivibe.com/wp-content/plugins/w3-total-cache/pub/js/lazyload.min