Niliaitta refers to a traditional cabin in Lapland, which is originally a permanent structure designed as a shelter, a safe place, to store food outdoors and prevent bears and other animals from accessing. It is also called bear cache, food cache or bear box.

This traditional Lappish wooden architecture is usually designed 100 metres from the campsite and downwind. To be effective, the food inside the storehouse is usually distanced from the branch, the trunk, and the ground.

Niliaitta cabin prototype by Studio Puisto Architects represents the next phase of the Kivijärvi Resort project.

The site for Kivijärvi Resort is located in the Central Finland region, near Salamajärvi National Park with both rich natural biodiversity and a need for ecologically sensitive solutions to support nature tourists accustomed to high-quality accommodation.

In order to celebrate the Genius Loci and the vibes of the area, the experience of nature as is and the sensory experiences and silence of being in nature were all sources of inspiration that guided the overall Niliaitta cabin design process. 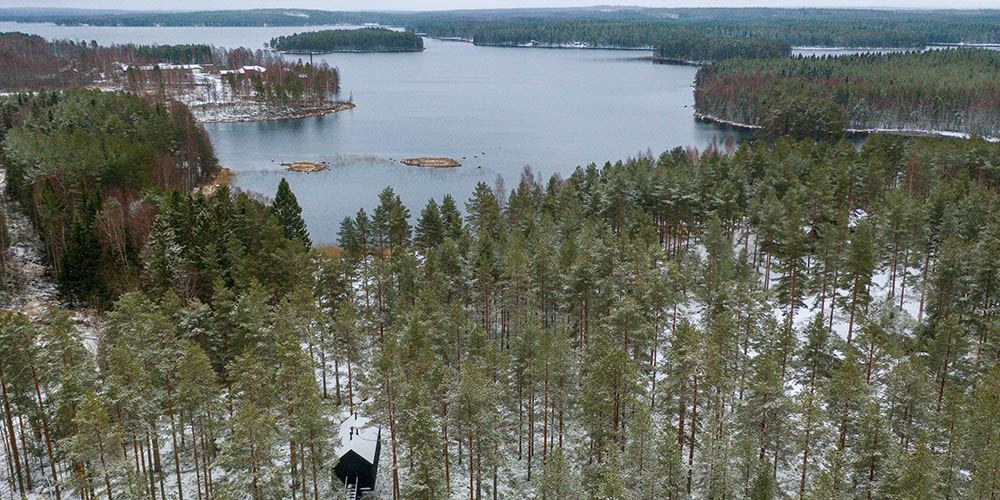 Above all, it was imperative that the rich nature was kept as untouched as possible and that any buildings would be grounded upon these very aspects of nature, making them complementary additions to the area.

While Kivijärvi is not in Lapland, it is located in the Suomenselkä region of central Finland, an area that has historically had Sámi settlement.

Similarly, the terrain of Suomenselkä is higher with an entirely different environment closer to the nature of more northern regions, giving the area the name “Lapland’s finger.” Therefore, it was natural to develop a modern application of a building typical to Lapland at Kivijärvi.

Within the site itself, there are several different types of habitats and landscapes, making it impossible to only design one type of accommodation experience for the entire area.

Therefore, three solutions were derived from nature in different ways – one is rooted in the ground and seemingly grows and strengthens from within, while another floats on the water and draws in the scents of the lake and the reflections of light from the water’s surface.

The third, featured here in the Niliaitta prototype, is lifted in the air to give us a more secluded perspective through which to connect with nature. 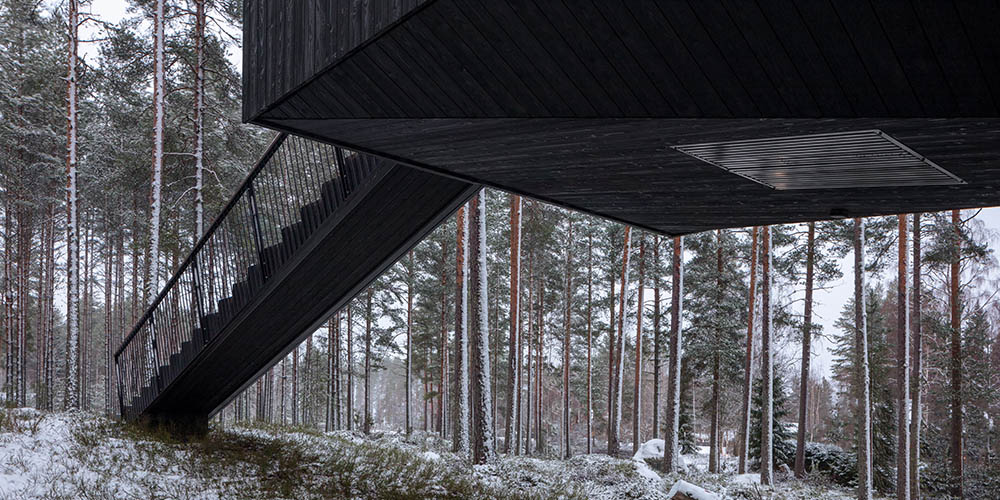 The idea is that by simply retreating away up in the air, we feel immediately detached from our everyday worries happening on the ground. However, no matter the placement, the contrast between the wild nature and a safe, cozy interior space is emphasized throughout, strongly guiding the overall experience.

For the future, a total of approximately 50 new accommodation units are planned for the area with an additional sauna and conference center building designed for the shoreline – these structures will partially float above the water. 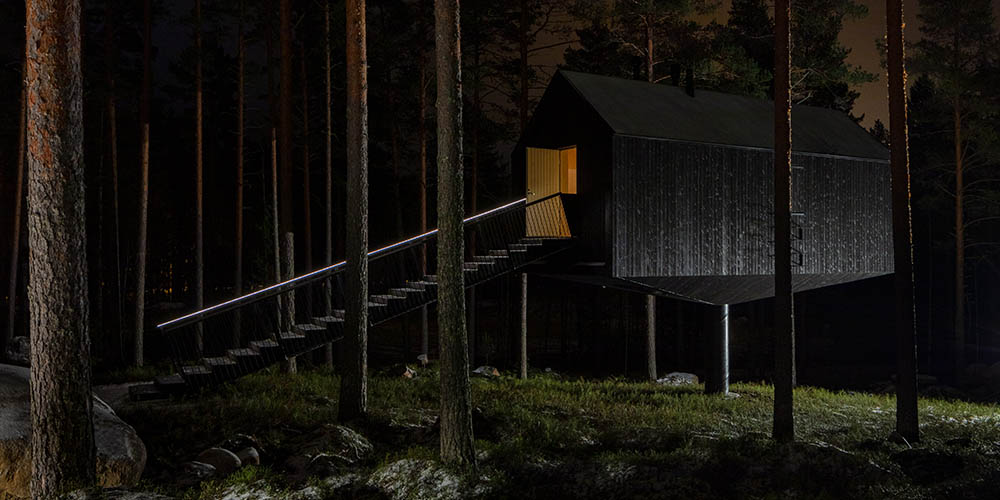 On an island in the lake, there will also be a bonfire, which is where all timber buildings in the entire Kivijärvi Resort area will be orientated towards. This not only acts as a central physical orientation point for the resort area, but also a mental one that allows us an opportunity to focus on just the essentials.

While a new structure, the exterior materials and coloring help blend the cabin into the surrounding nature and make it feel as if it has always belonged amidst the vertical rhythm of forest trees around it.

Inside the Niliaitta wooden architecture prorotype, the experience is unique.

Due to a ceiling height window the length of an entire wall, the visual connection to the surrounding nature is left as unobstructed as possible. The landscape that opens from this window intentionally dominates the rest, as the interior is done purposefully so that it would only serve as a neutral, blank canvas second to the nature outside. 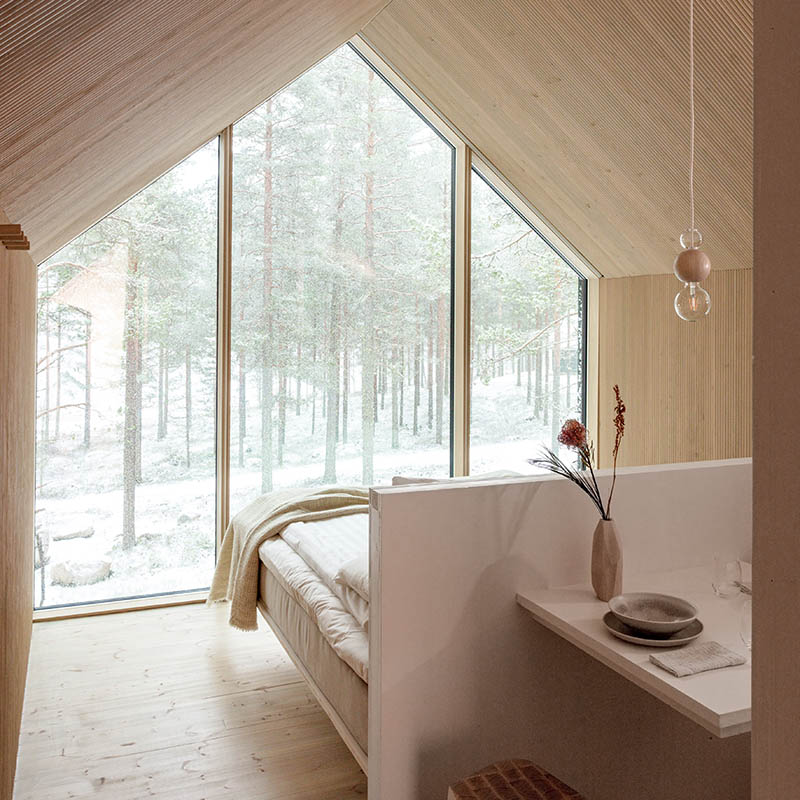 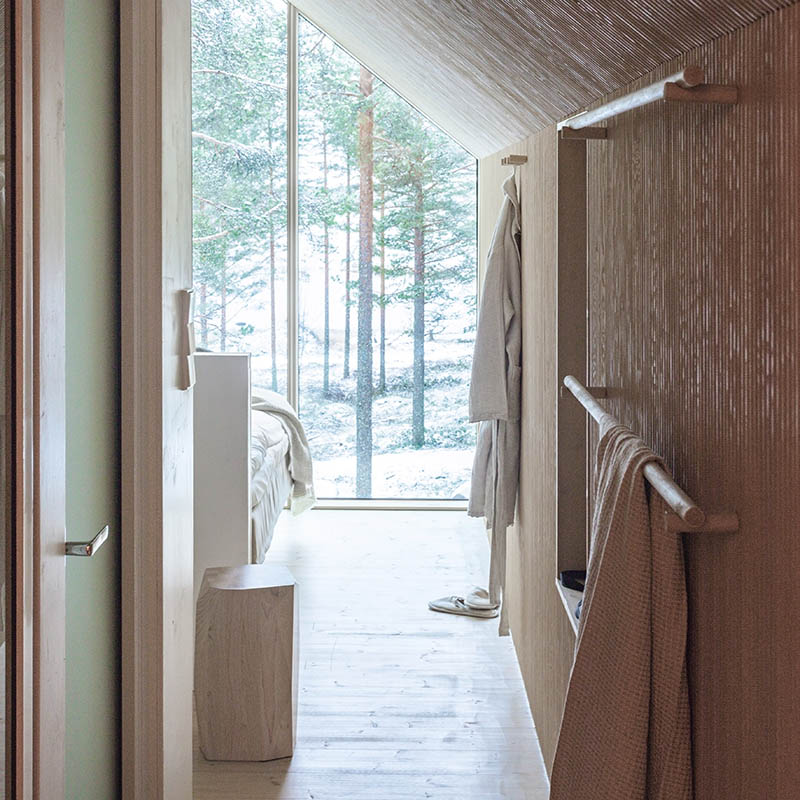 To remain environmentally sensitive, the materials of the Niliaitta prototype are all ecological with the use of wood in all interior surfaces, eco-wool as insulation, and the avoidance of plastic in the structures. In addition to the environmental benefits, wood also creates a cozy atmosphere, healthy indoor air, and pleasant acoustics.

In addition, the softness of the acoustics is also influenced by the modern angular finger paneling on the walls. 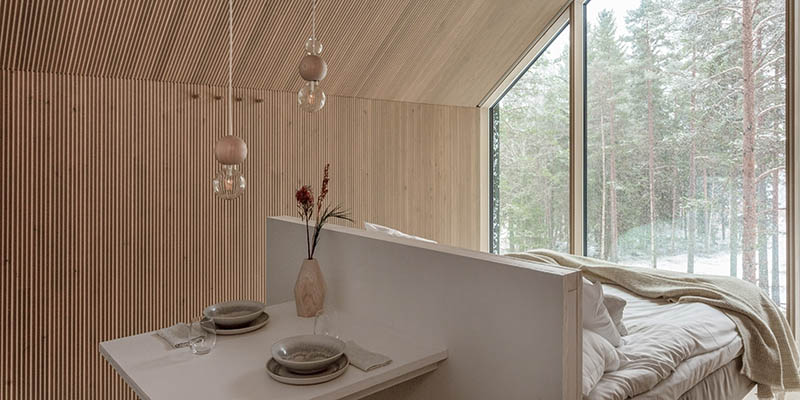 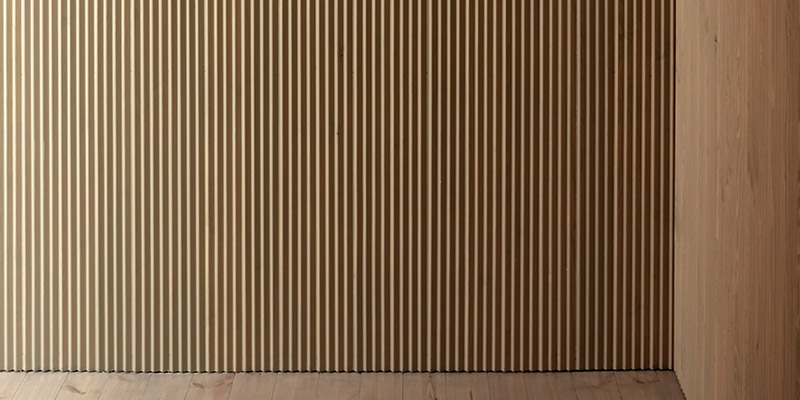 Throughout, the quality of equipment in the cabin corresponds with that of a high-standard hotel room. The bathroom, a spacious shower and a kitchenette are all housed in a rotating core in the middle of the cabin that also houses all tech (ventilation unit, air source heat pump, water heater, and electrical switchboard).

The solution makes it possible to keep the other walls and ceiling surfaces of the cabin as clean as possible, which creates a harmonious overall interior.

The overall wodden architecture is raised on a single pillar to maintain only minimal contact with the nature below, and after construction, the forest terrain below has been restored to its original appearance. Similarly, the cabin itself was strategically positioned so that only a few trees needed to be taken down during construction and only a narrow path grants access.

In addition, the water, sewer pipes and electrical cables all run to the Niliaitta cabin prototype under the external staircase in an enclosure, similarly creating a clean exterior as well.