MM34 Restoration of a French style building in Mexico City

MM34 Restoration of a French style building in Mexico City

“MM34 | Mar Mediterráneo 34” is an historical building with an ecletic French vibe built in 1910 in Mexico City and now restored by Inca Hernández.

Mexico City is the capital and largest city of Mexico and the most-populous city in North America. It’s a historical setting with an enormous cultural and architectural heritage, comprehending prehispanic, classic, modern and contemporary architectures, protected in its magical neighborhoods. Tacuba is one of them, located northwest to the downtown, this neighborhood has undergone social and urban transformations that have lasted to this day and where vestiges forged at different times can be found.

At the end of the 19th century and the beginning of the 20th century, Tacuba (also known as Tlacopan, meaning “florid plant on flat ground“) became one of the wealthiest areas of the city with large country houses, which over time and different political changes were abandoned and many were collapsed. However, among these vestiges the house of “MM34 | Mar Mediterráneo 34” remained. 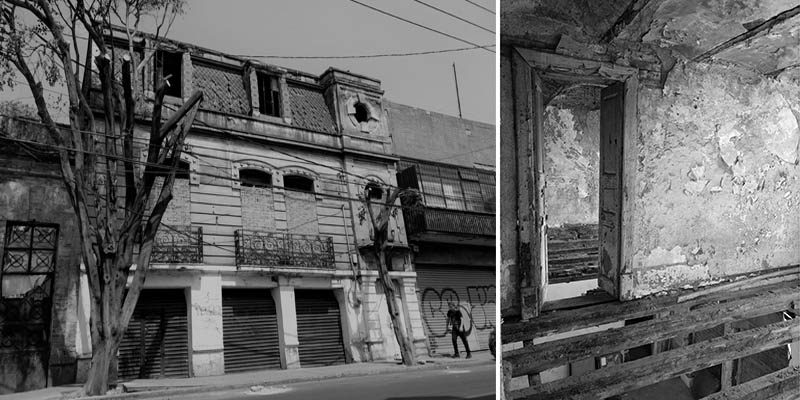 The restoration project started with the idea of ​​giving a new life to a house designed in two volumes, where the first incorporates the main facade while the second has a view to the main patio, although both were in advanced deterioration and the second volume was in ruins. 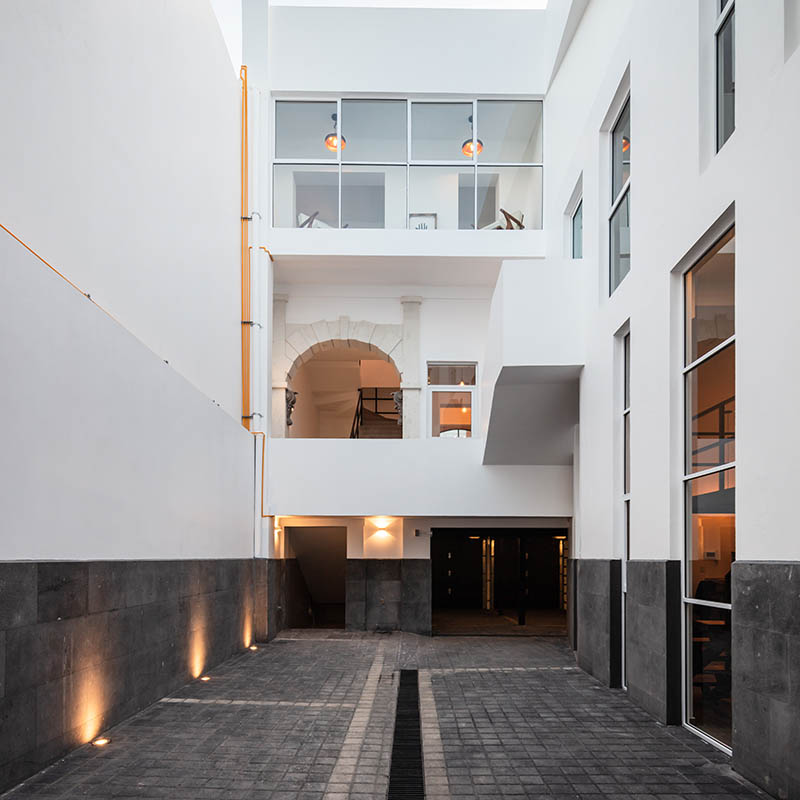 The restoration project of “MM34 | Mar Mediterráneo 34” intends to fusion what prevails and what is reborn through a linear connection between two eras, this connection is also reflected at the entrance by a volcanic stone baseboard which surrounds the entire ground floor and functions as the foundation to lift what has resurfaced.

Based on these characteristics, the restoration and intervention of the original elements of the era are implemented, where the spaces are regenerated with a new materiality, and the multiple artistic and artisanal elements are recovered from the main facade such as the carved quarry from the balconies and lintels, the iron railings, the large windows and the glass roof tiles, intending to rehabilitate the new urban image. 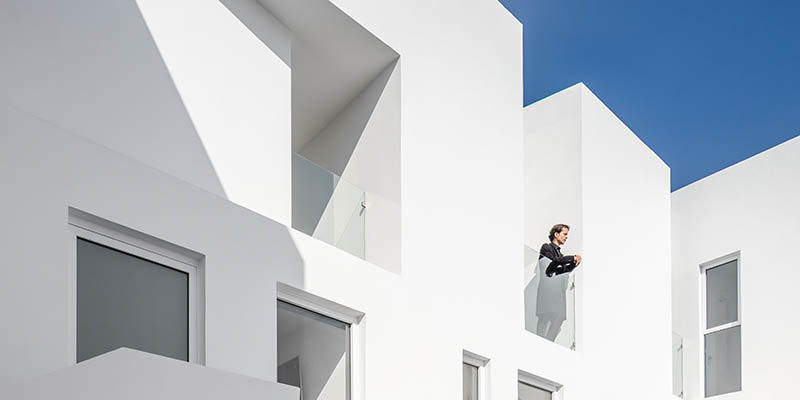 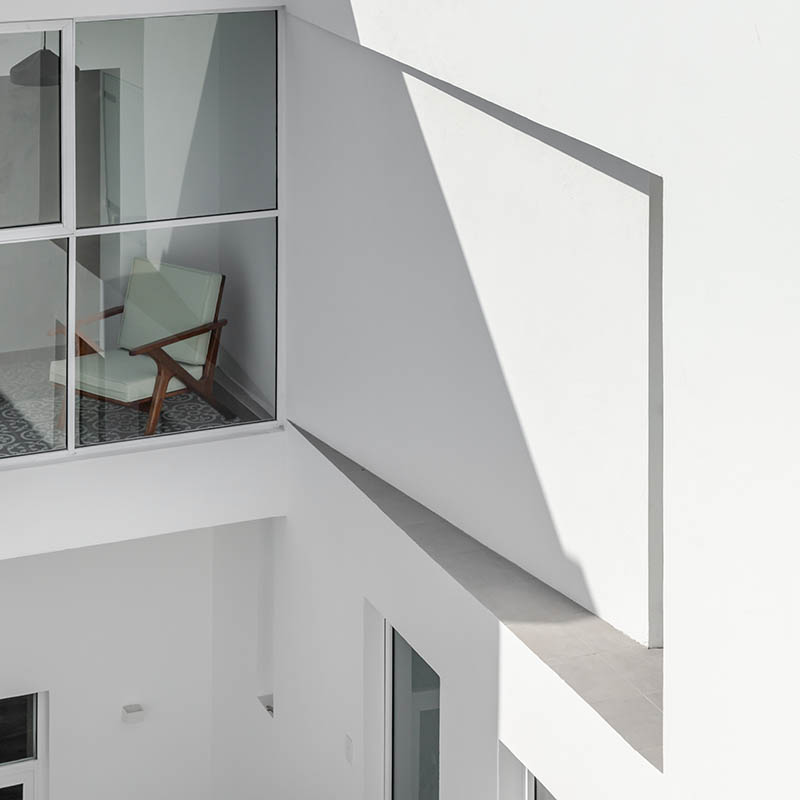 The interior is reconstructed as a reinterpretation of the past through a contemporary perspective, where a volume is raised up framing the sky in the existing main patio and portrays the arrangement of the old portals as a sequence of light and shadow, this is how these openings rise intermittently from the ground floor in double height and become a solid element of introspective architecture.

The restored house has 3 levels and 7 apartments that adapt to different flexible spaces (Loft, studio, familiar apartment and penthouse), which interact by views to the historical elements in the main patio and two additional courtyards of lesser proportion with a tree surrounded by a set of lattices that allow the entrance of natural light keeping an autochthonous essence. 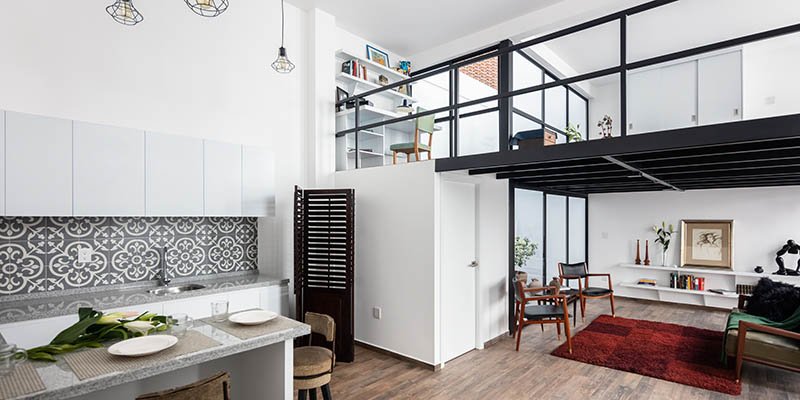 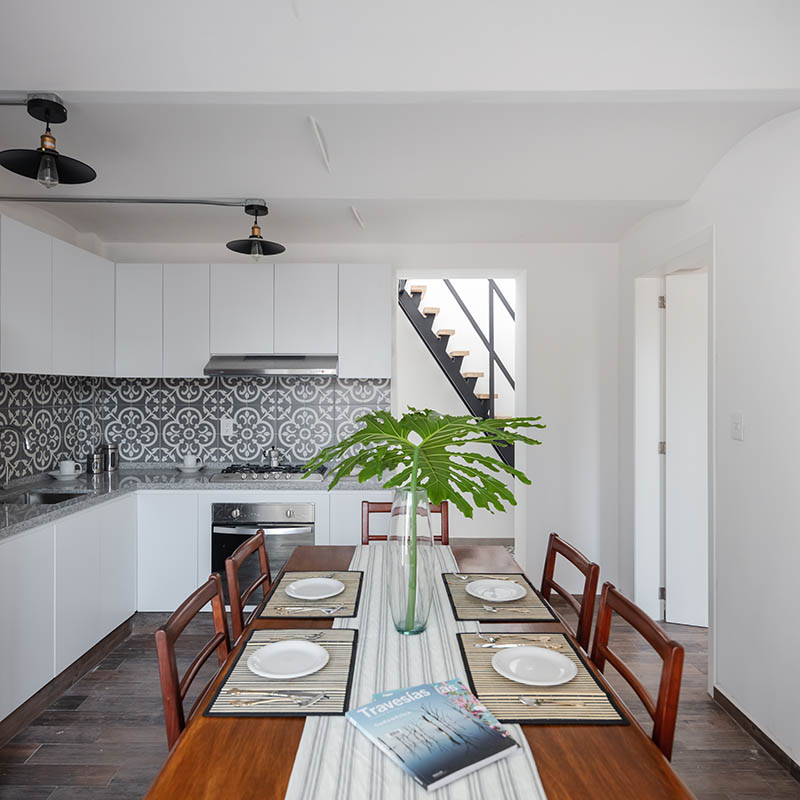 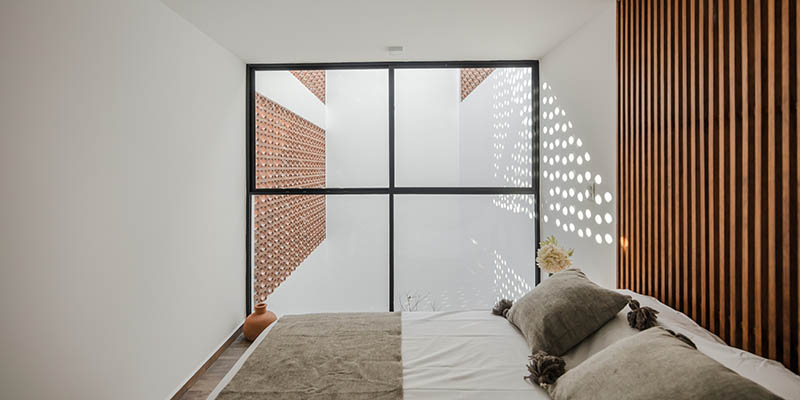 The goal of the intervention is to generate a legacy that encourages the transformation of Tacuba to enhance and rescue its heritage value, by taking advantage of spaces in a sustainable way to give life to the magical neighborhood.

After thirteen years as Communications and Marketing Manager in the manufacturing and design industry, I felt the need to launch something new in the world of design, building materials and architecture that would ease the contact between them. I've been always excited to meet architects and visit their architecture firms discovering more about their ethos, projects and vibes. That's why I founded ARCHIVIBE (formerly known as Architectours). Contact me for marketing purposes, communications projects or just to get in touch and discover more. daniele.prosdocimo [at] archivibe.com

Welcome to ARCHIVIBEYour personal data (address or phone number, your user ID and password, e-mail address) are collected and processed by ARCHIVIBE for purposes strictly related to the proper use of the website and its information services, with information also provided by third-party advertisers. Your personal information may also be used in other processing operations, however, in a manner in line with these purposes.Your personal data is processed electronically and will be stored in a way that allows you to be identified for the time strictly necessary for the purpose for which the data was collected and subsequently processed and, in any case, within the limits of the law. To ensure that your personal information is always correct and up-to-date, relevant and complete, please inform us of any changes at: [email protected] personal information will not be disclosed to third parties for purposes not permitted by law or without your explicit consent.While using and browsing on our websites, some personal information may be collected automatically (by means of so-called "Cookie"), like, for example, the collection of the user's IP address and other information relating to browsing the website or the user's preferences expressed when choosing the services offered by the site. This information and data are collected directly and automatically by the web site and as part of its operational functions.Cookies serve different purposes. Cookies allow a site, for example, to:- Remember your login information - Offer you safe browsing after a login - Optimise the website performance by reducing the loading times of the pages you visit - Improve the user experience - Ensure a consistent appearance to the site - Remember the list of your favourite products - Remember the contents of your shopping cart - Remember the order at the moment of your arrival on the site - Allows you to use the "share" and "like" features - Send information to other websites for the personalisation of their advertisementsBesides the cookies installed by the site, we use some third-party services that use external cookies. The purposes for which information is collected by these cookies are divided into the following types:> Analytical purposes, i.e. cooking serving to collect statistical information on the traffic and service use by the users, for example, how many visitors visited the site in a given period of time, which pages were visited, the duration of the visit etc.. This information is collected anonymously, and is not connected in any way with the personally identifiable information of the users who have visited the site. For this type of monitoring, we use the following third-party services: Google Analytics> Social sharing purposes. Some social networks may activate cookies for the proper functioning of their content sharing services. For example, when a site page contains a "share" or "like" button, the selected social channel establishes a direct connection to the site. The transmission of data to social networks is governed by the privacy policies and by the terms of use of the cookies of these companies, to which reference should be made for further information. Below is the list of social media networks used on the site: Facebook, LinkedIn, Instagram
Go to Top