Messner Mountain Museum Corones, is situated on the summit plateau of Kronplatz (2,275 m) in South Tyrol.
After a short trip by car from Venice of 3 hours you will immediately lose yourself in the magnificent scenario of the Dolomites, included among the miracles of nature by Unesco. The amazing show begin during the trip when, an hour and a half before, you start driving into the Cadore valley where you can find even astonishing architectural sites like the Eni Village or Cortina d’Ampezzo, the popular winter sport resort.

The museum is devoted to mountain history and also offers unique views of the great mountain walls of the Dolomites and the Alps.

At the edge of the most magnificent viewing platform in South Tyrol, in the distinctive museum building designed by Zaha Hadid, the view goes beyond the borders of South Tyrol to all points of the compass: from the Lienz Dolomites in the east to the Ortler in the west, from the Marmolada in the south to the Zillertal Alps in the north. 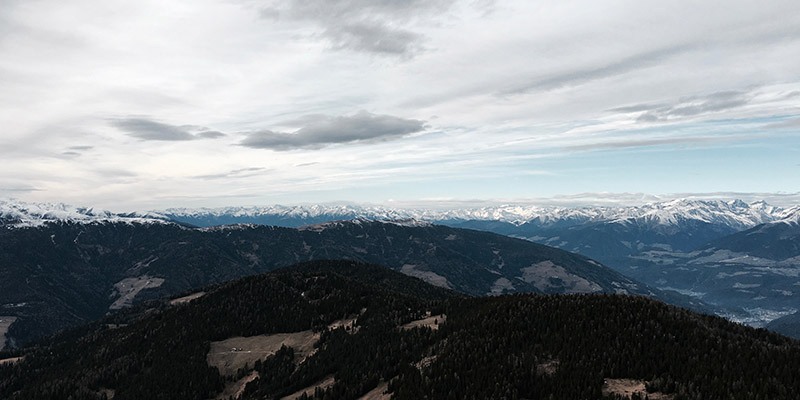 The view from Kronplatz is one of the most beautiful in the Alps: from the Dolomites over the Puster Valley to the Zillertal Alps. The mountain also stands at the meeting point of the three South Tyrolean cultures – German, Ladin and Italian. In winter Kronplatz is South Tyrol’s most popular ski destination; in summer, however, it attracts only a few tourists. The idea of a viewing platform was born as a way to revitalise the plateau in the warmer months and ensure a more sustainable use of the lifts. 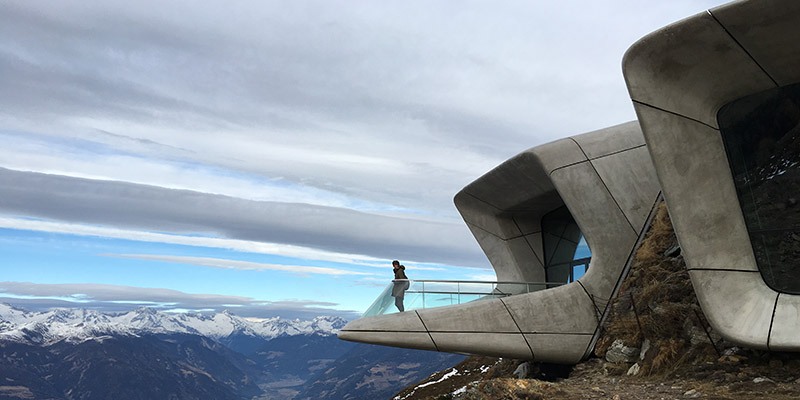 Messner heard of this idea, and proposed a cultural revaluation: a place of quiet, a place to slow down, a refuge and a realm of experience as an antidote to the existing “sporting hype”. A museum devoted to traditional alpinism, as the coronation (corones in Ladin means “crown”) of his museum structure. The Skirama Kronplatz not only immediately agreed, but was also able to persuade no less than the architectural studio of Zaha Hadid to take on the project. South Tyrol’s famous mountain for skiers and hikers – also a perfect launch pad for hanggliders and paragliders – thus became a museum mountain.

As Zaha Hadid said the idea behind the project is that visitors can descend within the mountain to explore its caverns and grottos, before emerging through the mountain wall on the other side, out onto the terrace overhanging the valley far below with spectacular, panoramic views. 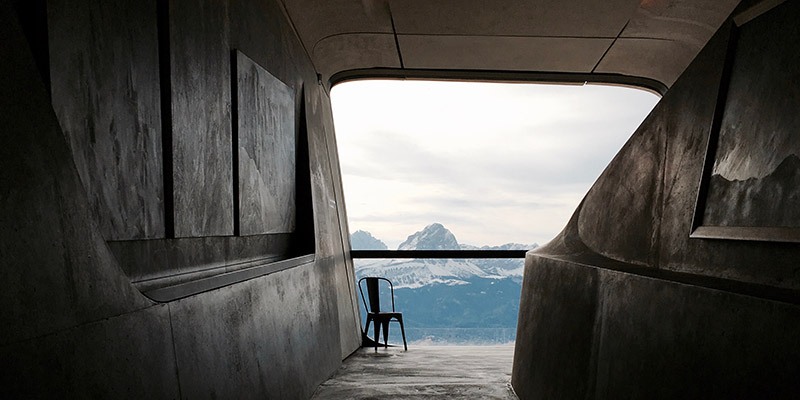 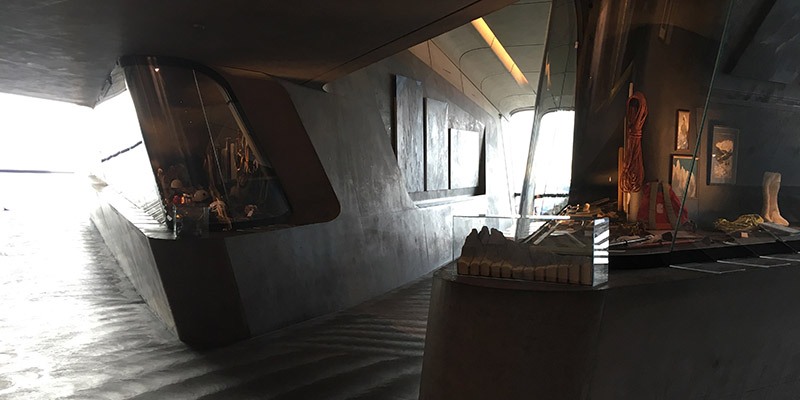 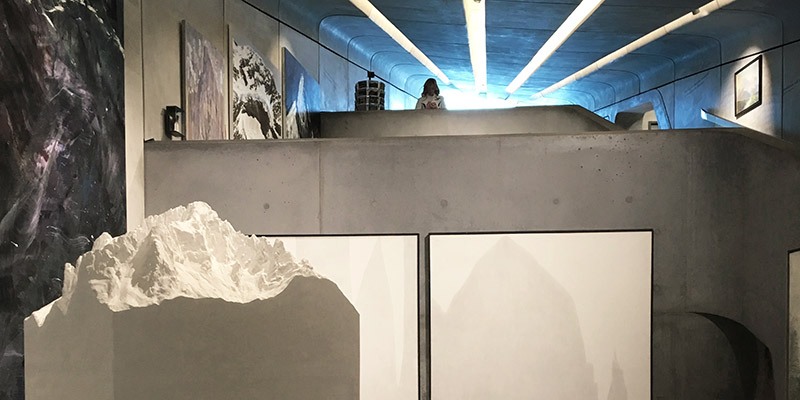 Reflecting the lighter colours and tones of the jagged limestone peaks of the surrounding Dolomites, the exterior panels of the Messner Mountain Museum are formed from a lighter shade of glass-reinforced fibre concrete and fold within the museum to meet the darker interior panels that have the luster and colouration of anthracite found deep below the surface. 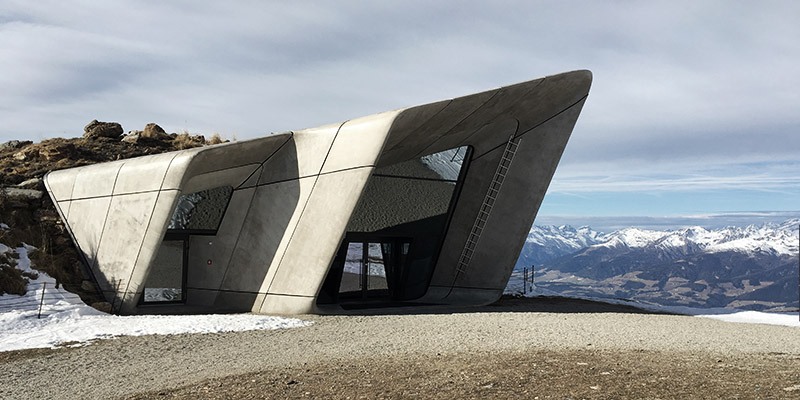 The majority of the museum’s exterior and interior panels are also made from in-situ concrete, with a formwork of tapered surfaces used to generate the peaks and abutments of the exterior panels that convey the rock and ice formations of the surrounding landscape. Internal and external panels were prefabricated, with the more complex curved elements created in a process of spraying layers of high-performance fibre-concrete into moulds carved from CNC-milled foam using the architect‘s 3D model.

Welcome to ARCHIVIBE Your personal data (address or phone number, your user ID and password, e-mail address) are collected and processed by ARCHIVIBE for purposes strictly related to the proper use of the website and its information services, with information also provided by third-party advertisers. Your personal information may also be used in other processing operations, however, in a manner in line with these purposes. Your personal data is processed electronically and will be stored in a way that allows you to be identified for the time strictly necessary for the purpose for which the data was collected and subsequently processed and, in any case, within the limits of the law. To ensure that your personal information is always correct and up-to-date, relevant and complete, please inform us of any changes at: [email protected] Your personal information will not be disclosed to third parties for purposes not permitted by law or without your explicit consent. While using and browsing on our websites, some personal information may be collected automatically (by means of so-called "Cookie"), like, for example, the collection of the user's IP address and other information relating to browsing the website or the user's preferences expressed when choosing the services offered by the site. This information and data are collected directly and automatically by the web site and as part of its operational functions. Cookies serve different purposes. Cookies allow a site, for example, to: - Remember your login information - Offer you safe browsing after a login - Optimise the website performance by reducing the loading times of the pages you visit - Improve the user experience - Ensure a consistent appearance to the site - Remember the list of your favourite products - Remember the contents of your shopping cart - Remember the order at the moment of your arrival on the site - Allows you to use the "share" and "like" features - Send information to other websites for the personalisation of their advertisements Besides the cookies installed by the site, we use some third-party services that use external cookies. The purposes for which information is collected by these cookies are divided into the following types: > Analytical purposes, i.e. cooking serving to collect statistical information on the traffic and service use by the users, for example, how many visitors visited the site in a given period of time, which pages were visited, the duration of the visit etc.. This information is collected anonymously, and is not connected in any way with the personally identifiable information of the users who have visited the site. For this type of monitoring, we use the following third-party services: Google Analytics > Social sharing purposes. Some social networks may activate cookies for the proper functioning of their content sharing services. For example, when a site page contains a "share" or "like" button, the selected social channel establishes a direct connection to the site. The transmission of data to social networks is governed by the privacy policies and by the terms of use of the cookies of these companies, to which reference should be made for further information. Below is the list of social media networks used on the site: Facebook, LinkedIn, Instagram
<link rel='stylesheet' id='fb-min-768-max-1024-p-css' href='https://www.archivibe.com/wp-content/plugins/fusion-builder/assets/css/media/min-768-max-1024-p.min.css?ver=3.2.1' type='text/css' media='only screen and (min-device-width: 768px) and (max-device-width: 1024px) and (orientation: po