The Domaine de l’Anse Sauvage by Philippe Barriere Collective is a residential housing and apartment hotel project, located on the site bordering the seaside resort of Gammarth, in northern Tunisia, about twenty kilometers from Tunis.

It is surrounded to the south by endangered forest, and to the west and northwest by a marina which has artificially transformed the coastal landscape and destroyed its natural vegetation.

Philippe Barriere Collective is a forward-thinking architecture practice that addresses suburbanization and social and humanitarian issues. They moves from the paradigm of separation and rupture to the one of connection and interdependence where everything is perceived as being connected in the same great whole.

The Domaine de l’Anse Sauvage project supports this change toward an architecture of connection and interdependence. 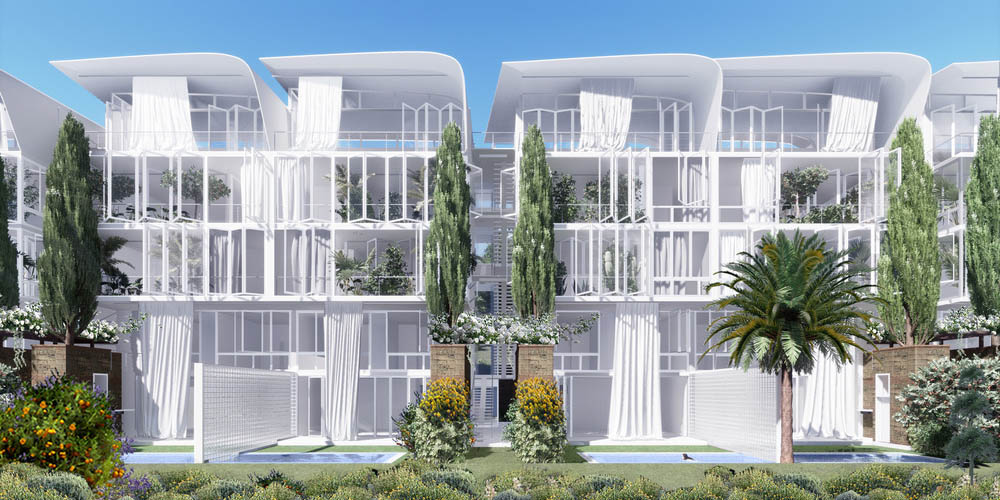 Philippe Barriere proposes an architecture of the link whose role is to reregister man within nature so that the protection of one contributes to the regeneration of the other and vice versa in a process that allows them to be rethought together within the same affiliation. 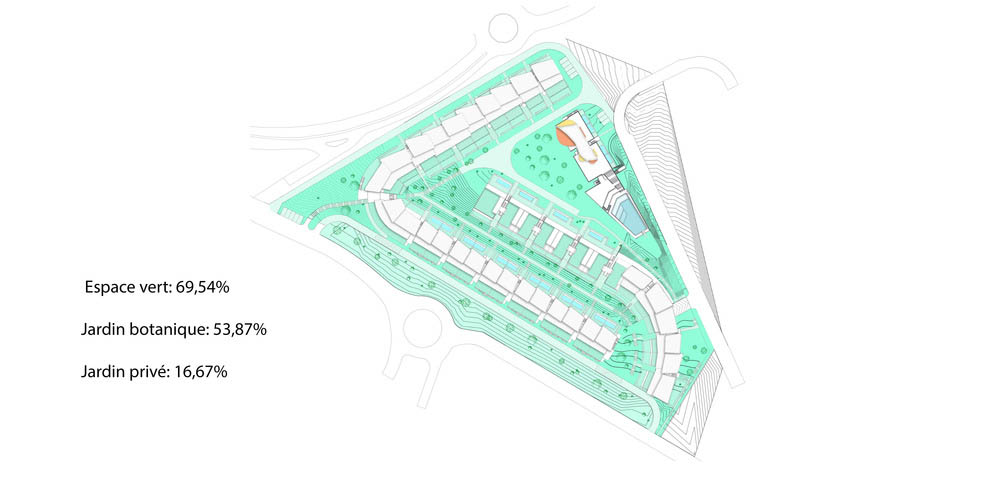 This residential project is part of a process that aims to expand the role of architecture so that spaces in relation to the exterior take the place of “second nature”.

This 30% requalification of the project makes it possible to compensate for the existing deficits in the surrounding ecosystem and to prevent aggravations due to its construction.

The irreversible destruction perpetrated around the project site encouraged, within it, to maximize green spaces, to amend the ecosystem and to compensate for what has been irreparably lost by what was previously lacking.

This required the implementation of a strategy involving different types of spaces, each fulfilling a particular function within this relationship.

The Domaine de l’Anse Sauvage is located north-east of Tunis, on the coast of the Gammarth coast on the hillside overlooking the Baie des Singes. Its abandoned vegetation emerges from the lower part of the Bay denatured by a dense frame and an eroded coastline.

To better preserve this unique green enclave, 70.00% of the estate remains vegetated (54.00% converted into a botanical garden and 16.00% into private gardens). The remaining 30% accommodate 164 housing units (50% of their roof area is planted). The botanical garden is home to endangered native species as well as a great diversity of “dry plants” to fix the soil, store moisture and restore biodiversity.

The refusal to complete the blocking of the bay with concrete inspired an open architecture, composed of porous layers between which are housed living spaces ensuring continuity and exchanges with the outside. These layers call for fluidity in a movement inviting the user to project themselves into a universe thought of as a whole (interior + botanical garden). 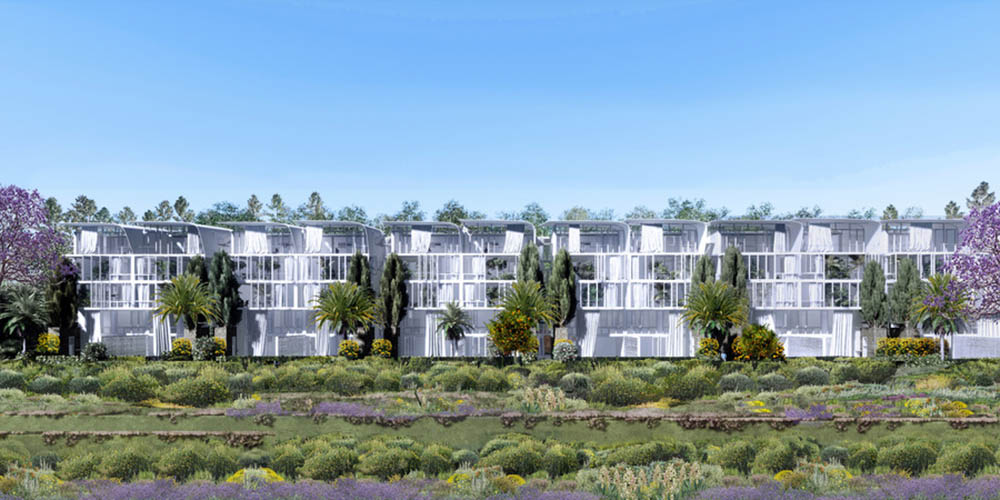 So the botanical garden is no longer just a place of passage but a living space. It is a reserve of wild plants, where native species are preserved in their natural environments.

The practices generated by this architecture allow an open model of life, which encourages a collective approach to safeguarding the environment.

To do this, the botanical garden and architecture are inseparable from the design of a project which has been conceived in a double interior-exterior relationship.

The Domaine de l’Anse Sauvage’s design echoes that very one of the Byzantine or Islamic Persian gardens, it made it possible to create places of intermediate exchanges, mediation and amplification, belonging simultaneously to both and facilitating a symbiosis offering the inhabitant the experience of a “second nature”.

In fact, the “interior-exterior” limit is no longer a closure but a spatial unit, both “subject” of the different functions it fulfills and attribute of the architecture that it defines.

In biology, specification is the phenomenon by which tissues transform to specialize organs and single out a species. 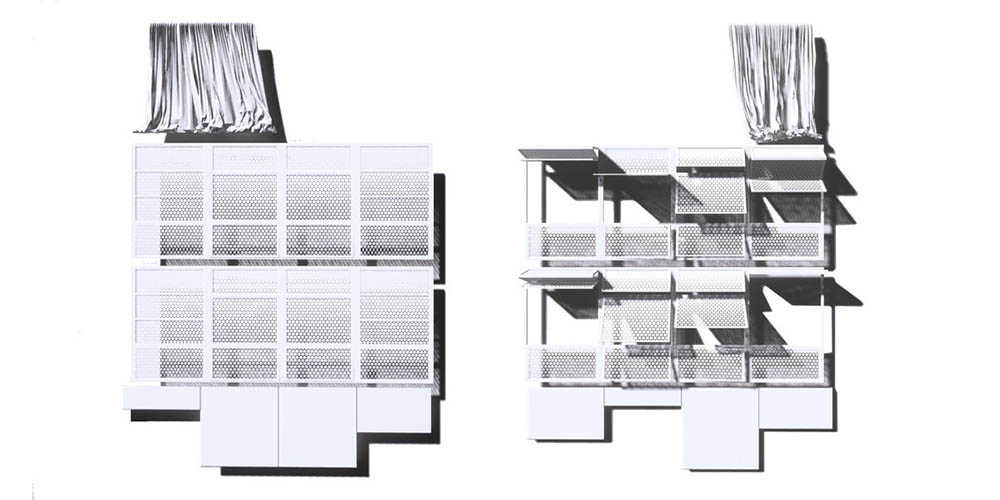 The space between the exterior facade and the interior facade constitutes a double skin that generates functional differentiators according to the levels, cardinal orientations, location within the site, the slope of the land, and the perspectives on the panorama.

The double skin allows buildings to respond to external climatic contingencies (environment, seasons, prevailing winds, humidity, etc.), and to the changing necessities of interior needs. It acts as an operating organ:

Welcome to ARCHIVIBE Your personal data (address or phone number, your user ID and password, e-mail address) are collected and processed by ARCHIVIBE for purposes strictly related to the proper use of the website and its information services, with information also provided by third-party advertisers. Your personal information may also be used in other processing operations, however, in a manner in line with these purposes. Your personal data is processed electronically and will be stored in a way that allows you to be identified for the time strictly necessary for the purpose for which the data was collected and subsequently processed and, in any case, within the limits of the law. To ensure that your personal information is always correct and up-to-date, relevant and complete, please inform us of any changes at: [email protected] Your personal information will not be disclosed to third parties for purposes not permitted by law or without your explicit consent. While using and browsing on our websites, some personal information may be collected automatically (by means of so-called "Cookie"), like, for example, the collection of the user's IP address and other information relating to browsing the website or the user's preferences expressed when choosing the services offered by the site. This information and data are collected directly and automatically by the web site and as part of its operational functions. Cookies serve different purposes. Cookies allow a site, for example, to: - Remember your login information - Offer you safe browsing after a login - Optimise the website performance by reducing the loading times of the pages you visit - Improve the user experience - Ensure a consistent appearance to the site - Remember the list of your favourite products - Remember the contents of your shopping cart - Remember the order at the moment of your arrival on the site - Allows you to use the "share" and "like" features - Send information to other websites for the personalisation of their advertisements Besides the cookies installed by the site, we use some third-party services that use external cookies. The purposes for which information is collected by these cookies are divided into the following types: > Analytical purposes, i.e. cooking serving to collect statistical information on the traffic and service use by the users, for example, how many visitors visited the site in a given period of time, which pages were visited, the duration of the visit etc.. This information is collected anonymously, and is not connected in any way with the personally identifiable information of the users who have visited the site. For this type of monitoring, we use the following third-party services: Google Analytics > Social sharing purposes. Some social networks may activate cookies for the proper functioning of their content sharing services. For example, when a site page contains a "share" or "like" button, the selected social channel establishes a direct connection to the site. The transmission of data to social networks is governed by the privacy policies and by the terms of use of the cookies of these companies, to which reference should be made for further information. Below is the list of social media networks used on the site: Facebook, LinkedIn, Instagram
<link rel='stylesheet' id='avada-min-768-max-1024-p-social-sharing-css' href='https://www.archivibe.com/w