With an overall area of 366,000 square metres, it is one of the largest urban redevelopment areas in Europe and sees the prestigious contributions of some of the most renowned architecture firms in the World such as Zaha Hadid Architects, Arata Isozaki, Daniel Libeskind, One Works and, now, BIG Bjarke Ingels Group.

CityWave, as well as the entire CityLife redevelopment project, is part of the European strategy of Generali Real Estate. It will become the new gateway to CityLife, completing its skyline along with the Three Towers.

With its new office buildings, CityLife will be one of the city’s biggest business districts, as well as standing as a symbol of the Milan of the future.

Aldo Mazzocco, Chief Executive Officer of Generali Real Estate and Chairman of CityLife, said: “This new- generation building is a further ‘step up’ in the evolution of properties for offices: a container for managerial activities that brings together objectives of positive impact on the environment and quality of life with new ways of using spaces in the wake of the shock from lockdown. In this way, we are defining a new paradigm for the world.”

Rather than compete with the already constructed towers, CityWave frames them without exceeding their height, completing the composition of the space and the existing context.

Bjarke Ingels, Founding Partner of BIG Bjarke Ingels Group, said: “The large catenary canopy of CityWave unites the last two buildings of City Life with a single sagging gesture. The solar tiles power the workplaces within while the wooden underside covers a new public space underneath. Like a contemporary interpretation of the massive covered public space of Galleria Vittorio Emanuele II the solar canopy offers the citizens of Milan a shaded and sheltered urban space for the life and culture of this vibrant new part of the city. The resultant silhouette unites indoor and outdoor space in a form of weightless monumentality.”

The new gateway to CityLife is therefore integrated with the urban areas, the streets and existing road network, creating a continuum between the district and the city.

The project envisages the construction near Largo Domodossola of two buildings called East and West, united by a distinctive dynamic structure that recalls a wave more than 200 metres long (hence the name, CityWave), intersected by a large area of greenery. 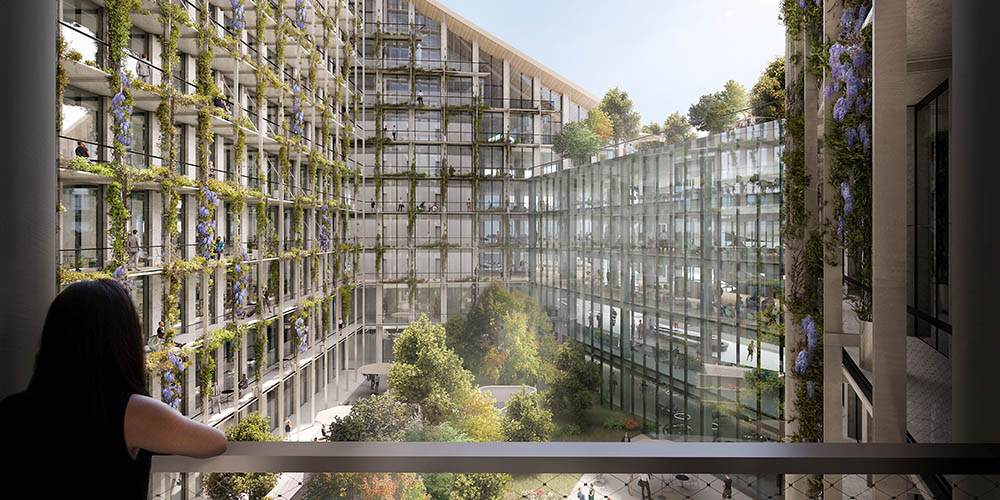 The West building will be made up of two underground floors, a lower ground floor and twenty-one floors above ground. Seventeen floors will be used as offices, three as a restaurant and sky bar and one as a technical floor.

The ground floor will be the location of a number of shared facilities and the Conference Centre, made up of a main auditorium with almost 300 seats and three secondary halls with various capacities.

The building is inspired by a concept of relationship, made tangible by an innovative, visible and physical link between the floors: the first five are connected by means of a monumental sculptural staircase while the subsequent floors are linked visually by the open space under the roof, which reveals their “cascading” layout.

This unique feature creates areas of informal collaboration that will encourage the exchange of ideas in the workplace. 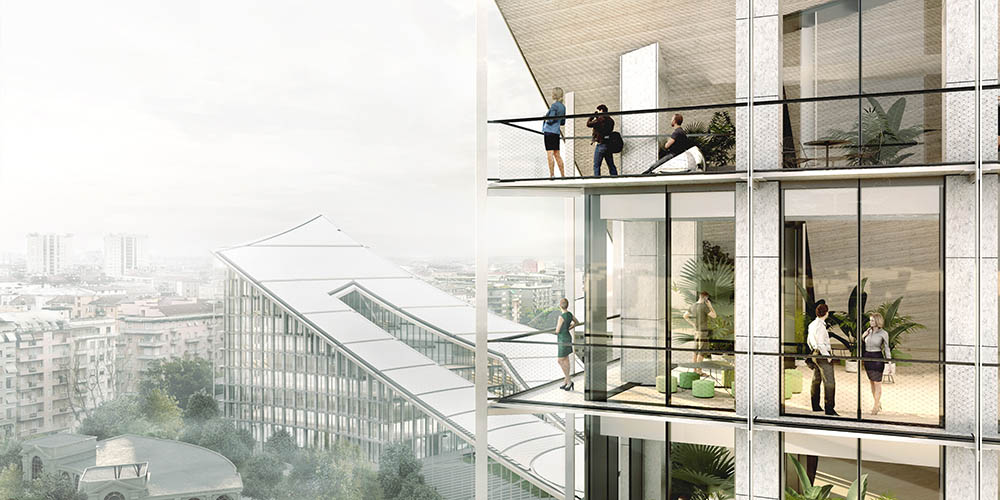 Finally, on the last two floors, a panoramic restaurant culminates in a spectacular viewing terrace.

The East building will have two underground floors, a lower ground floor and eleven floors above ground. On the ground and first floors, the building has an atrium with a winter garden and shared facilities. The panoramic terrace on the tenth floor overlooks the city centre.

The interior design of CityWave East displays an approach based on relationships, developed through the physical and visual connection between the various floors: the first two are joined by a monumental staircase while the others are connected visually by the atrium and the balconies that surround the inner courtyard.

The exclusive “cascading” open space beneath the roof provides a stimulating and engaging working environment but one that it also flexible and safe.

The floors of the two buildings provide three-metre high ceilings to allow access to a great quantity of natural light through a continuous glass facade, characterised by transparency and brightness, with a view both of the city and the two large inner courtyards.

In the highest part, the buildings will finally be completed with cascading terraces for use as multifunctional spaces with spectacular views of the other CityLife skyscrapers and the entire city of Milan and the Alps beyond. 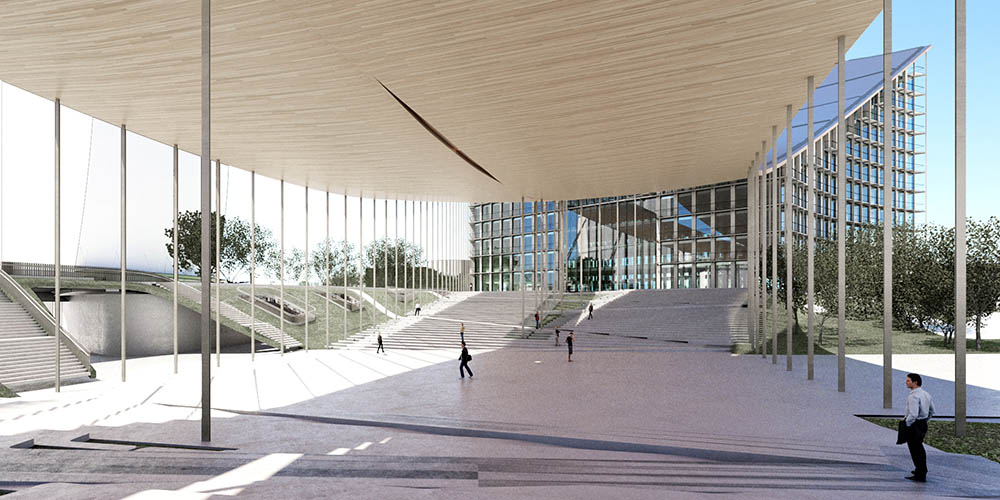 The portico connecting the two new CityWave buildings will be furnished with columns and a roof covered with photovoltaic panels that will make the buildings not only self-sufficient in energy but also able to generate a positive impact on the environment.

Indeed, it will house the largest urban photovoltaic park in Milan and one of the largest in Europe with an area of around 11,000 square metres, able to provide energy production estimated at around 1,200 MWh a year.

The photovoltaic roof, as well as generating energy for the two buildings and acting as an element of structural connection, will also provide a covered public space, enriched with urban furniture and green areas that can be used throughout the year. The architectural project was aimed at redefining the spaces in order to offer new ways of sharing and collaboration and make them more flexible, ready to meet the requirements that have emerged during the Covid emergency.

The entire area is marked by the strong focus on sustainability and respect for the environment: the Residences envisage the use of renewable energy sources while the three towers have already obtained the prestigious LEED certification with a Gold level classification. CityWave has obtained LEED pre certification with a Platinum level classification.

Moreover, CityLife is the largest pedestrianized area in Milan, thanks to the decision to move road traffic and car parks underground.

CityWave is the final piece of the puzzle for the area, which is being returned to the city in a completely renewed form that can be enjoyed by everyone. It is not just a new construction that is being added to those that have gone before but a multiplying element that fully achieves the CityLife project’s aims: to step into the future through innovation, beauty and sustainability.