After four years of construction, BIG Architects announced the completion of IQON, the tallest mixed-use residential building in the Ecuadorian capital of Quito – a city with one of the highest elevations in the world. Traditionally a city of dense low-rise buildings, the skyline of Quito was re-imagined following the relocation of the city-center airport over a decade ago. 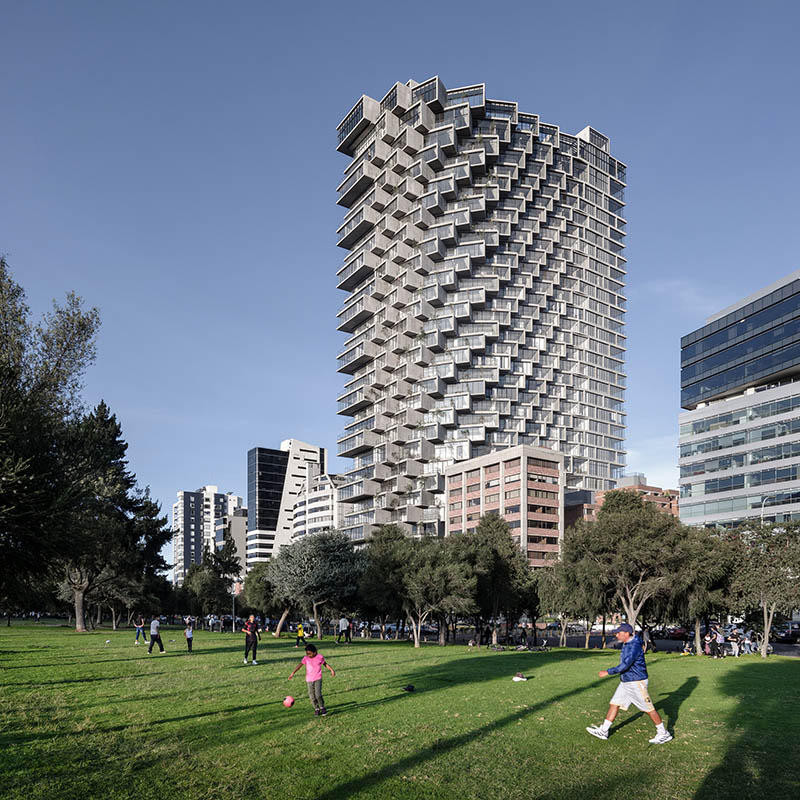 With the skyline able to grow upwards, Uribe Schwarzkopf hired BIG in 2017 to design a 390,000 sq ft mixed-use residential building, including 215 residences, commercial units, office spaces, and a variety of amenities. In addition to IQON, BIG and Uribe Schwarzkopf’s EPIQ Residences, located nearby, is slated to finish construction in 2023.

IQON, by BIG Architects, and QORNER, by Safdie Architects, represent the ongoing transformation of Quito into a cornerstone of architecture, design and innovation. Not only do the new buildings contribute to the skyline of the city, but celebrate our partnerships with the most exciting, internationally renowned architects in the world.

“As the first residents move in and businesses begin to take space in the building, we are looking forward to seeing each building come to life and become part of the fabric of the city” says Tommy Schwarzkopf, Co-Founder, Uribe Schwarzkopf.

IQON is designed as a vertical community, and an extension of the neighboring La Carolina Park, which visually continues up onto the building facade. The building features a notable curved corner, wrapped by terraces that continue around the building’s perimeter with views of the park, city, and the Pichincha volcano. 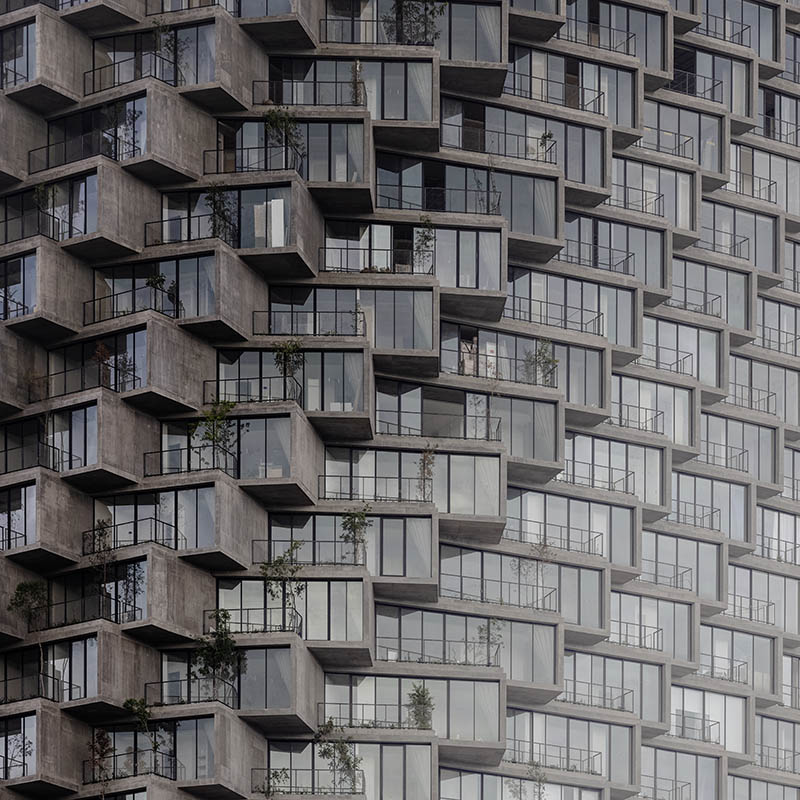 IQON’s architectural identity is defined by its ‘stripped back’ façade; the raw, exposed concrete simultaneously functions as the building’s structure.

Individual ‘pixels’ are stacked 32 floors high and rotated to provide the best possible views while simultaneously creating terraces for the apartments. 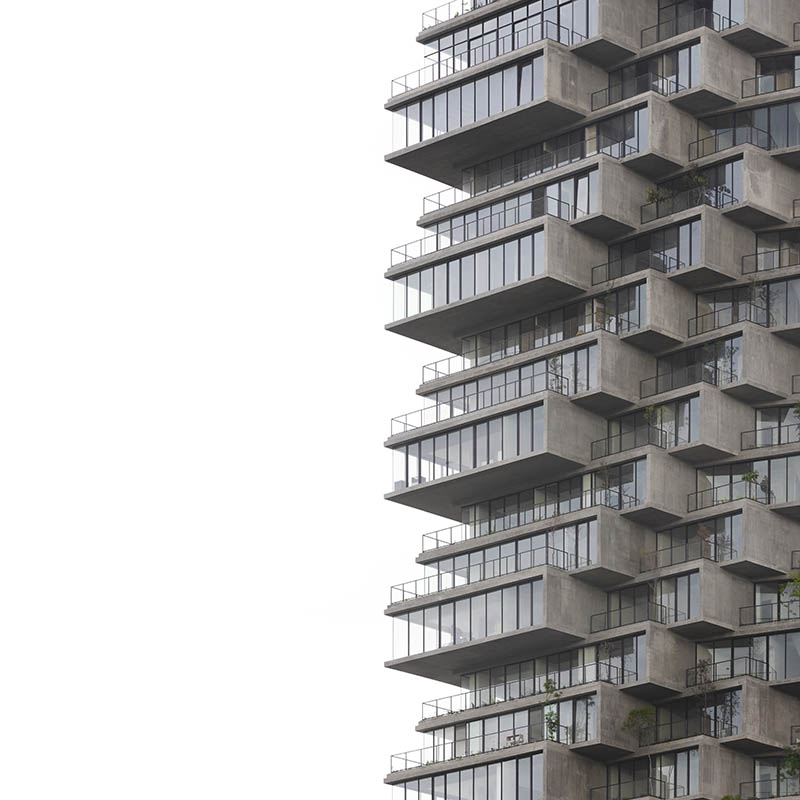 Celebrating native trees and plants, the building integrates greenery wherever possible to take advantage of Ecuador’s temperate climate and ecology – the country with the most plant species per square meter in the world.

“We’ve tried to take all the iconic qualities of Quito – such as the enjoyment of living in one of the most biodiverse places on the planet, in a city on the equator where the seasons are perfect for both human and plant life – and bring that experience into the vertical dimension. IQON is an entire vertical community of individual homes; an extension of La Carolina Park that now climbs all the way up to the rooftop,” says Bjarke Ingels, Founder and Creative Director, BIG Architects.

The ground floor plaza includes generous public spaces, retail units, and public art. It functions as a new east-west pathway, connecting the park to the rest of the neighborhood.

Upon entering the lobby, the material palette transitions from the raw, pared-back exterior to a more refined aesthetic; marble stone pavers complement the custom millwork reception desk, and concrete touchpoints nod to the façade.

Deep emerald-green tones are utilized on the ceiling tiles, mailboxes, and through to the elevator lobby – located beyond a blackened-steel portal. 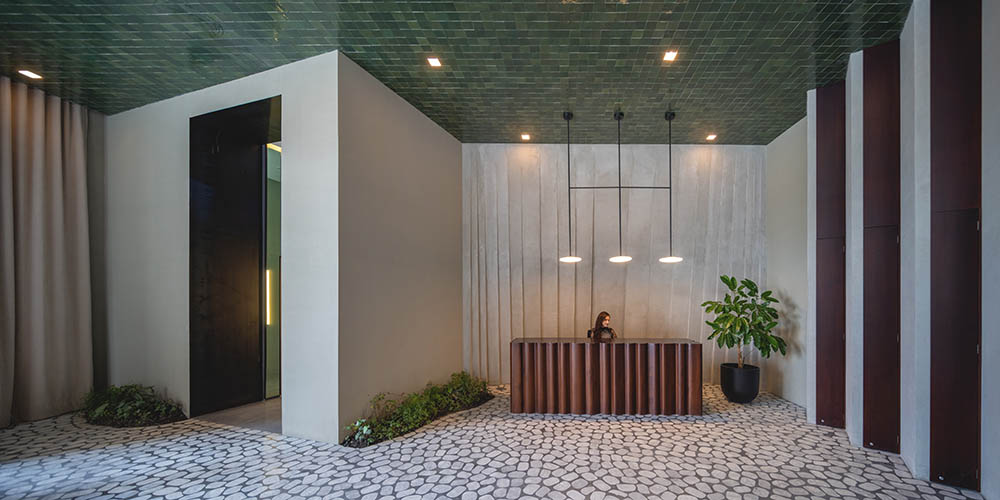 Quito’s biophilia is carried from the public spaces below into the private domain of each home via the sculptural planters that are integrated into the architecture of the building.

The planters become a unique concrete sculpture inside the apartments – creating space for the root zone of the tree for the apartment terrace above – while transforming the façade of the building into a celebration of Quito’s verdant biodiversity. 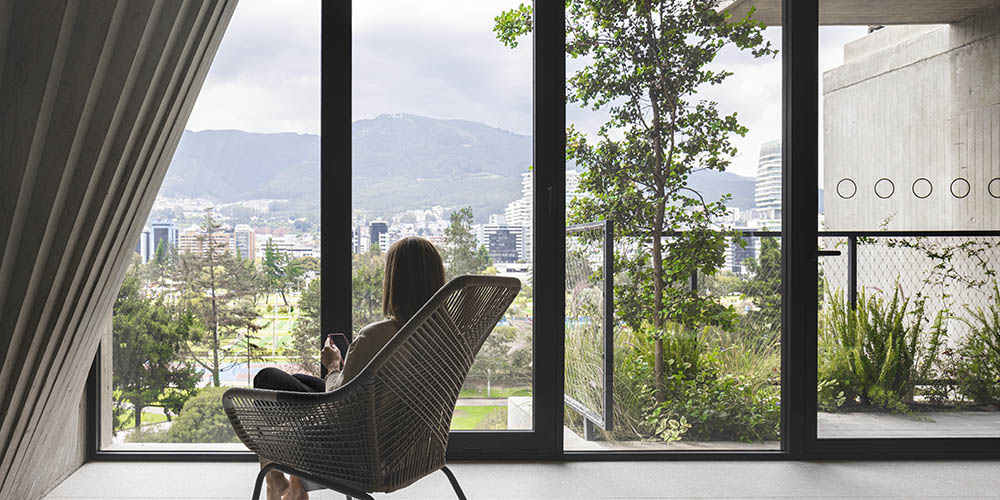 The residential building also acts as an urban tree farm: once the vegetation planted on the terraces outgrows its planter, it can be replanted in parks all over the city. In this way, the building becomes part of a green cycle – from park to building, and back to park.

“Each apartment floor features through-units – apartments that have terraces on both the north and south facades – which not only allows for views across the entire city, but also offers the opportunity for cross ventilation and a sense of openness” says Thomas Christoffersen, Partner, BIG Architects.

An integrated lap pool and terraces at the top of the building offer residents a place to relax while overlooking the city. Additional building amenities include a gym and squash court; a spa; a bowling alley; entertainment rooms; and a business center. 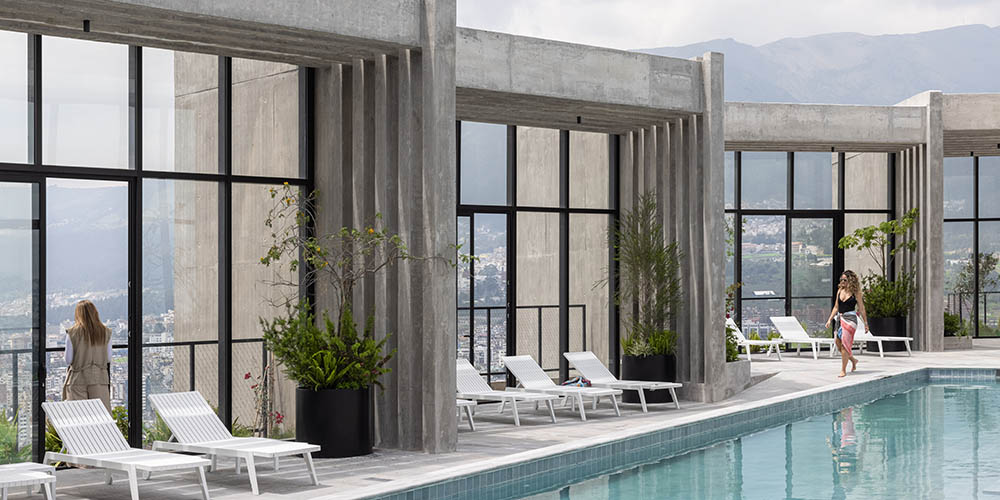 IQON is the first mixed-use building in Quito to have a preliminary EDGE certification, granted by GBCI (Green Business Certification Inc.) and IFC (International Finance Corporation). 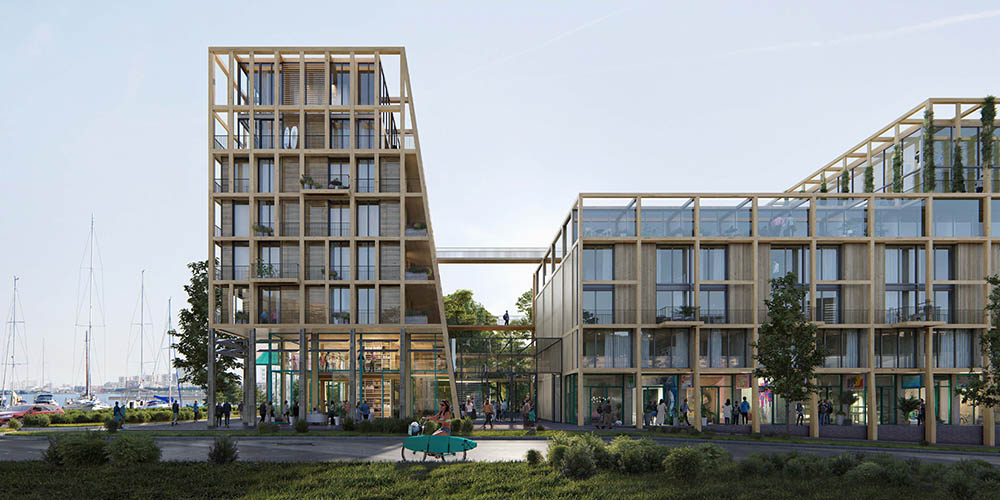