Delayed by the Covid-19 pandemic, the winners were announced at the AR Emerging Architecture awards live virtual event, where shortlisted architects also contributed to the Emerging architect’s guide, offering advice and anecdotes to architects and students starting out in the world of architecture.

Carles Enrich Studio has been announced the winner of the AR Emerging Architecture awards 2020, along with Khadka + Eriksson Furunes who have won the Peter Davey Prize and Taller Capital who have been highly commended. 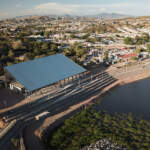 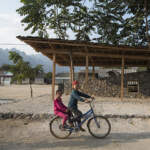 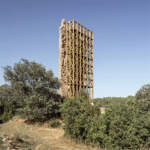 The jury commended the way Carles Enrich Studio’s work reconnects history with the future and understands heritage as infrastructure: ‘something dynamic and appropriated rather than museumified’.

The studio’s work focusses on interventions in historical landscapes in Catalonia; the Merola Tower project in Puig-reig ‘prefers to recover the experience and recreate the viewpoint, rather than to rebuild the castle’.

The judges applauded the studio’s approach to existing context, commenting, ‘It is about reinterpreting rather than reconstructing, and it takes a certain form of freedom – and a lot of persuasive power – to do it successfully.’
The practice’s portfolio ‘shows that big ideas can be built with minimal materials, that good architecture should imagine itself filled with life, and remind us that everything is ephemeral.’

Mexican practice Taller Capital were highly commended by the judges, recognising the studio’s ambition and ability to ‘design a new river, or a new communal space, with each project they take on, independently of the commission they were given.’

With an emphasis on large-scale urban projects, their built work ‘intelligently navigates dichotomies between formal and informal systems, proving that public space is transformative.’ The practice’s work at Parque en el Represo Colosio, a park which dramatically floods for eight months of the year, was commended by the judges for its ‘excellent approach to water management’ and use of ‘considered geometries which radically improves the everyday’.

Also recognised by the awards was Khadka + Furunes, based between the Philippines and Norway, and awarded this year’s Peter Davey Prize – a prize awarded to the editors’ choice.

Editor of The Architectural Review, Manon Mollard, describes the practice’s ‘quietly radical collaborative approach to practice and working with local people’ in villages in Vietnam. Resembling the local tradition of mutual support, đôi công, ‘the studio is putting into practice a way of working that resonates with both the AR’s editorial practice and a model for collaborative working more broadly.’

The AR Emerging Architecture awards winner and Peter Davey Prize winner will receive a specially commissioned trophy created from rammed earth, a sustainable and low-carbon building material. The trophies were designed and made by UK-based product designer Elliot Lunn.

Welcome to ARCHIVIBE Your personal data (address or phone number, your user ID and password, e-mail address) are collected and processed by ARCHIVIBE for purposes strictly related to the proper use of the website and its information services, with information also provided by third-party advertisers. Your personal information may also be used in other processing operations, however, in a manner in line with these purposes. Your personal data is processed electronically and will be stored in a way that allows you to be identified for the time strictly necessary for the purpose for which the data was collected and subsequently processed and, in any case, within the limits of the law. To ensure that your personal information is always correct and up-to-date, relevant and complete, please inform us of any changes at: [email protected] Your personal information will not be disclosed to third parties for purposes not permitted by law or without your explicit consent. While using and browsing on our websites, some personal information may be collected automatically (by means of so-called "Cookie"), like, for example, the collection of the user's IP address and other information relating to browsing the website or the user's preferences expressed when choosing the services offered by the site. This information and data are collected directly and automatically by the web site and as part of its operational functions. Cookies serve different purposes. Cookies allow a site, for example, to: - Remember your login information - Offer you safe browsing after a login - Optimise the website performance by reducing the loading times of the pages you visit - Improve the user experience - Ensure a consistent appearance to the site - Remember the list of your favourite products - Remember the contents of your shopping cart - Remember the order at the moment of your arrival on the site - Allows you to use the "share" and "like" features - Send information to other websites for the personalisation of their advertisements Besides the cookies installed by the site, we use some third-party services that use external cookies. The purposes for which information is collected by these cookies are divided into the following types: > Analytical purposes, i.e. cooking serving to collect statistical information on the traffic and service use by the users, for example, how many visitors visited the site in a given period of time, which pages were visited, the duration of the visit etc.. This information is collected anonymously, and is not connected in any way with the personally identifiable information of the users who have visited the site. For this type of monitoring, we use the following third-party services: Google Analytics > Social sharing purposes. Some social networks may activate cookies for the proper functioning of their content sharing services. For example, when a site page contains a "share" or "like" button, the selected social channel establishes a direct connection to the site. The transmission of data to social networks is governed by the privacy policies and by the terms of use of the cookies of these companies, to which reference should be made for further information. Below is the list of social media networks used on the site: Facebook, LinkedIn, Instagram
<link rel='styl