The Russian Federation Pavilion at the Giardini of the Venice Biennale needs urgent work.
At the 2020 Venice Biennale it will be “Open!” while under construction: as a building, and as an institution.

Designed by Alexey Shchusev and opened to the public in 1914, the Russian Pavilion at the Giardini of the Venice Biennale was conceived as an architectural translation of Russian culture and values. While retaining its distinctive character it has undergone substantial modifications to respond to curatorial needs that have often prevailed over the physicality of the building, neglecting its original architectural features. The re-design of the Pavilion is a commitment that goes beyond an exercise of set design or simple architectural accuracy, it is an occasion to rethink the relationships that the Pavilion embodies as cultural outpost in Venice. 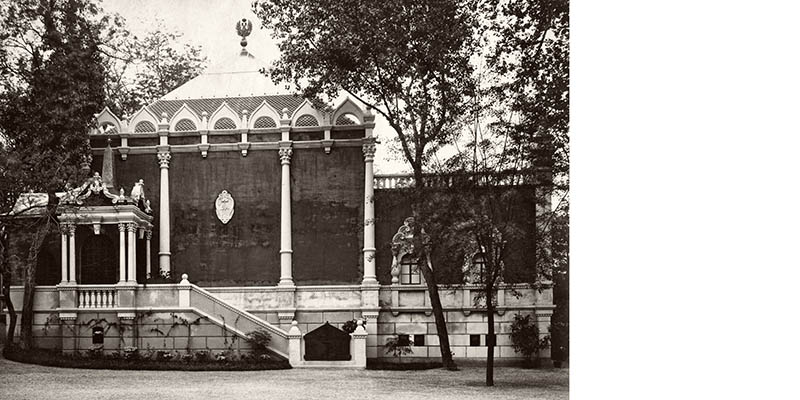 Commissioner Teresa Iarocci Mavica, together with curator Ippolito Pestellini Laparelli, have invited a collective of interdisciplinary teams — from academics to craftspeople, from designers to activists and technologists — to enter into a dialogue on the function and values of the Pavilion as a temporary institution and to reconstruct both the physical space and the societal purpose of the Pavilion, through such tools as architecture, electronic music, underground cinema, environmental practices and food.

During the Biennale, the space of the Pavilion itself will become a temporary architectural office and an in-progress working site. Through the reconstruction of the building and institution, the Pavilion will transform from a passive exhibition space into a platform for performance and exchange, questioning the way a global event like the Biennale relates to national identity and cultural representation.

“Open!” provides a stage for various groups connected to the Pavilion: visitors, local organisations, temporary inhabitants, the city of Venice, flora and fauna. Together and through different practices, they will reflect on the main theme of this year’s Biennale — how will we live together? — and experiment with possible modes of coexistence. 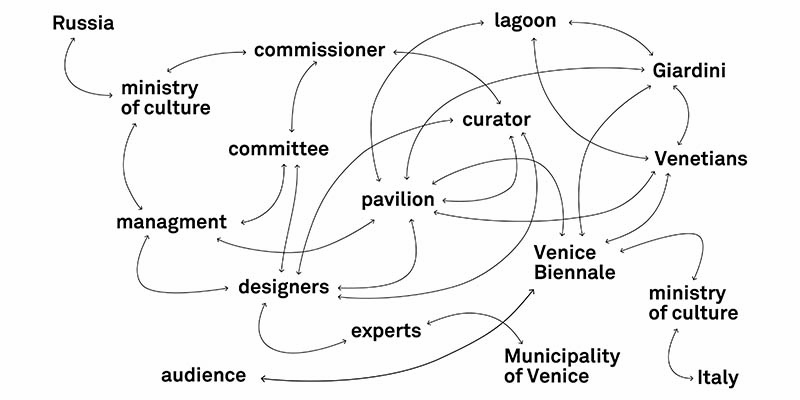 From these many voices, a pluralistic and vivid reflection will emerge of the contemporary creative scene from the Russian Federation, involving new generations and outlasting the common cycle of Biennales.

KASA (Kovaleva and Sato Architects) has been selected out of an open call with over 100 submissions to set up their temporary office inside the Pavilion, where they will work on a reconstruction of the building during the Biennale. KASA is a young Russian/Japanese architecture office based in Moscow and Tokyo, founded by Alexandra Kovaleva and Kei Sato. For this project they collaborate with Maria Pshenichnikova (fashion designer), Haruka Shoji (Textile designer), Yoshirio Fuhushima (structure designer) and Ksenija Voronina (preservation architect). Their proposal engages with different models of care towards architecture, people and ecosystems, by opening up the architecture towards the gardens and the lagoon. Construction on the Pavilion is expected to start in November 2020, with the project to be completed during the spring of 2021.

Lion & Unicorn (🦁& 🦄) is a multidisciplinary collective that has initiated the development of a digital platform to investigate the public meaning of institutions. The collective consists of Pekka Airaxin, Liza Dorrer, Karina Golubenko, Mariia Kachalova, Anton Kalgaev, Maria Kosareva and Ivan Kuryachiy in collaboration with Daria Nasonova. The application will function as a chatbot and allow any visitor to take on the roles of different actors surrounding the Biennale, providing insight into the mechanisms and relationships between countries, curators, institutions and the public.

Vladimir Nadein is curator and co-founder/producer of the Moscow International Experimental Film Festival (MIEFF). He will be curating a selection of movies that will be screened in the garden of the Pavilion. The program will showcase a new wave of Russian cinema that deals with nostalgia, intimacy and retreat in the post-Soviet generation through which a different idea of collectivity emerges.

Mikhail Maximov is an artist and game designer based in Moscow and will present a version of his recently developed gaming platform called MOMAM (Museum of Modern Art Massacre) which will be on display in the Pavilion.

Pavel Milyakov (aka Buttechno) is a Moscow based techno DJ/producer and will give an audiovisual performance during the opening week of the Biennale and participate in a talk. He will also compile a playlist for the architects working inside the Pavilion and for the Pavilion’s website. With his label RASSVET Records Pavel Milyakov provides a platform for local talent, rethinking and exploring the legacy of Russian music.

Vladmir Rannev is a composer and will be working on a sonic image for the institution, generated through an interactive installation that will capture sounds originating from different sources inside and outside of the pavilion, engaging with its architecture and environment acoustically. Through electronics, a musical score is generated that opens up the walls of the Pavilion, allowing it to absorb the sounds of its surroundings.

More contributors will be announced closer to the opening date of the 2020 Venice Biennale.
The 17th International Architecture Exhibition will run 23 May to 29 November 2020 (pre-opening 21 and 22 May), curated by architect and scholar Hashim Sarkis.