This new tower is located on the Wijnhaven in the up-and-coming Maritime District. The striking residential high-rise building program is focused on urban housing quality, with lots of space for social interaction, a lively plinth and features that enhance the living comfort of the residents.

The tower gives a new boost to the positive urban revitalization of Rotterdam. Initiated by Barcode Architects in 2013, the project currently is the epitome of the city’s high rise vision, which was presented last year.

In 2013, in the aftermath of the financial crisis, Barcode Architects initiated the development of The Muse on plot Wijnhaven 69, where a municipal office was located at the time. With the municipality’s upcoming relocation to their new venue in De Rotterdam, the building would become vacant. Instead of awaiting a market response, Barcode Architects made its own design proposal for this plot, after which it approached investor Wilma Wonen.

The proposal convinced Wilma Wonen to acquire both the Wijnhaven 69 plot and the adjacent plot 65, where Barcode Architects’ 110-meter- high CasaNova is currently under construction. The tower’s program was specified by intensive collaborative session between Barcode Architects, advisors and the client, with comfortable inner- city living’ as a leading aim. By developing the two buildings almost simultaneously, joint functions that serve both towers could be developed, further strengthening the sense of community. 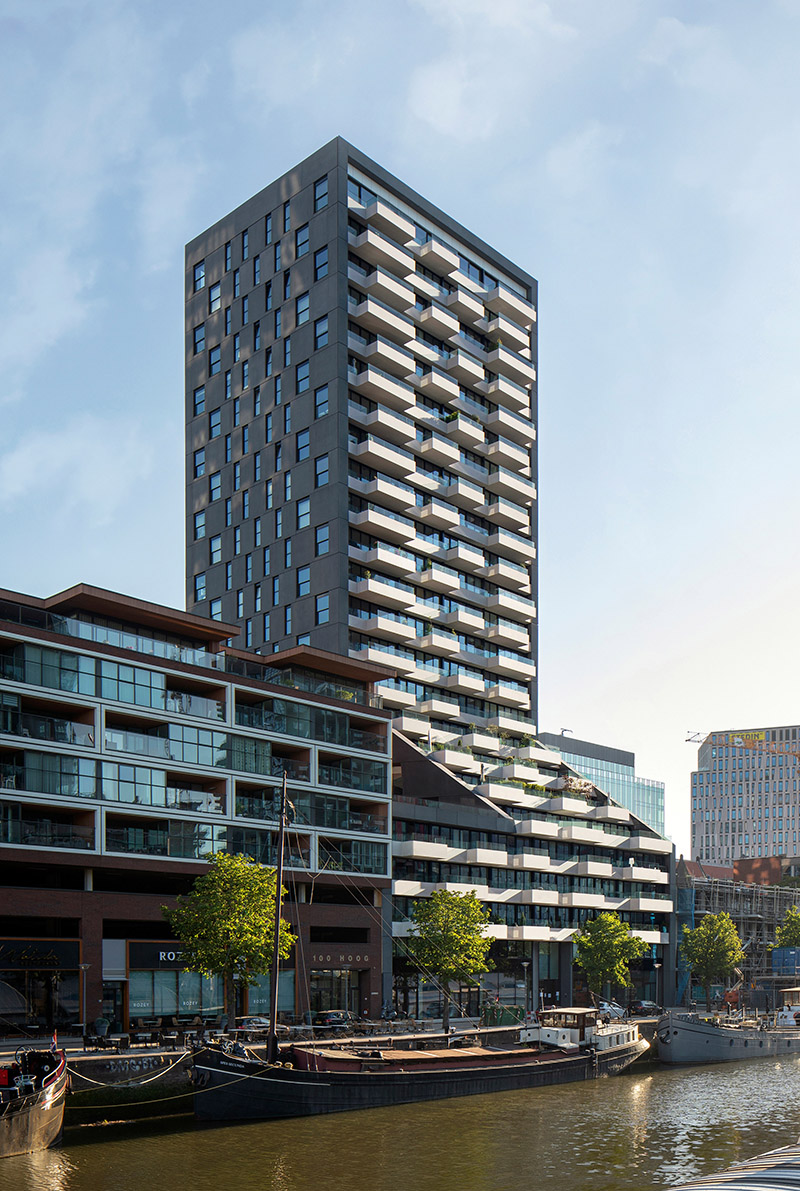 The design of The Muse emphasizes the connection with the street level through its inviting and transparent plinth. A distinctive central lobby providing access to the apartments and large commercial spaces are located in the plinth, connecting the volume and the surrounding urban environment. Although the three-layer parking facility has been realized above ground, it is hidden behind the apartments overlooking the Wijnhaven, taking away the anonymity of a parking structure on street level. These apartments are an essential component in adding vitality the adjacent quay. 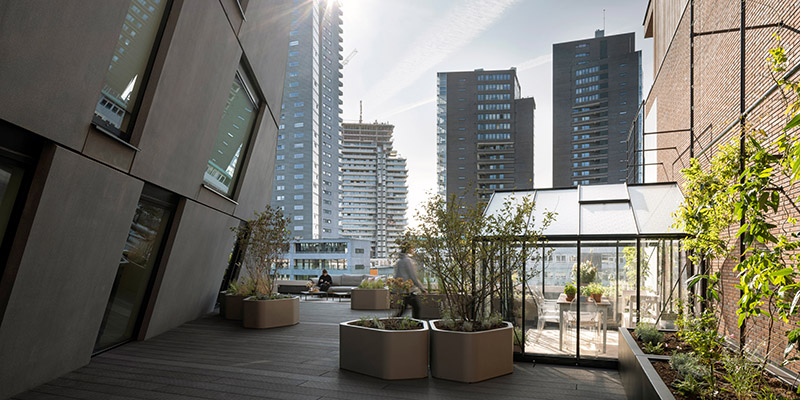 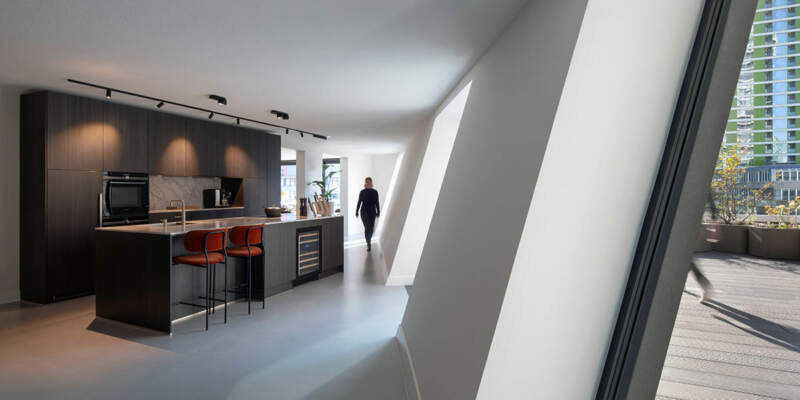 Between the fifth and eighth floors, the volume makes a recognizable curve to the northwest, creating space between its own volume and CasaNova, which will complete the ensemble with its characteristic triangular volume on the adjacent plot in 2022. The towers are connected by a large, green roof garden on the fifth floor, offering extra outdoor space for the residents. By situating the roof garden on level five rather than the top of the tower, the architects create an interesting dialogue between this new green space and the urban environment on street level. 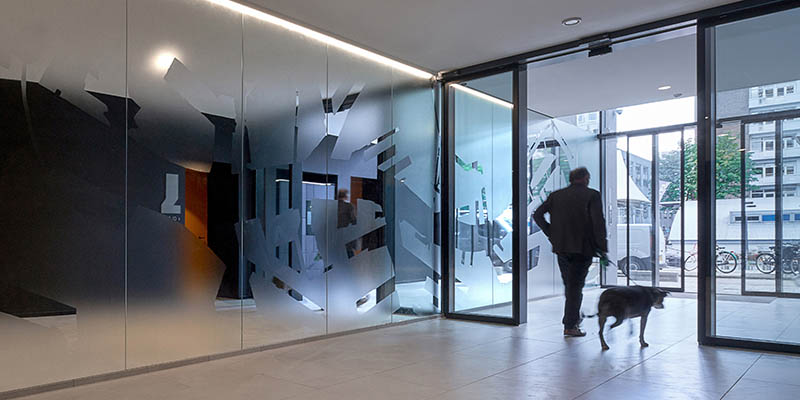 Barcode Architects added additional joint features located for the residents of both towers — such as hotel rooms that residents can reserve for their guests, a sports facility, a communal workspace and a comfortable kitchen adjacent to the roof terrace entrance. 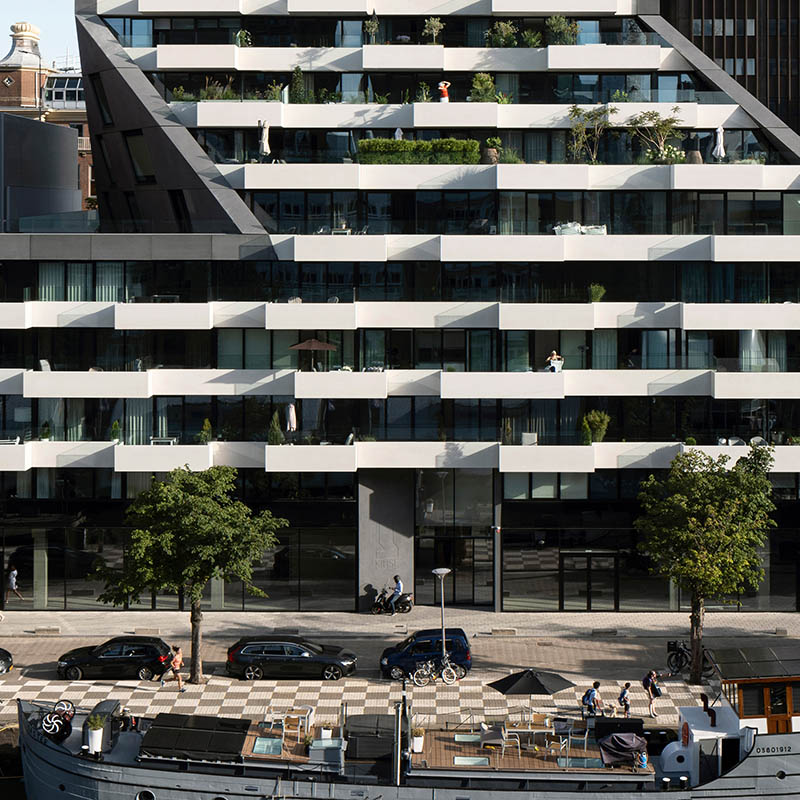 The Muse enriches the Rotterdam skyline with a new, sculptural silhouette. The more introvert anthracite facades form a dark band around the tower. These facades, with smaller openings that provide the apartments with natural light while offering enough privacy towards the adjacent towers, contrast beautifully with the spacious and bright white balconies on the north and south sides of the tower.

The balconies are placed in an offset with the floors above and below, allowing for a double height and optimal daylight entry in the apartments. The balconies provide all apartments with spacious outdoor areas with panoramic views over the Maas river on the south and the city centre to the north. 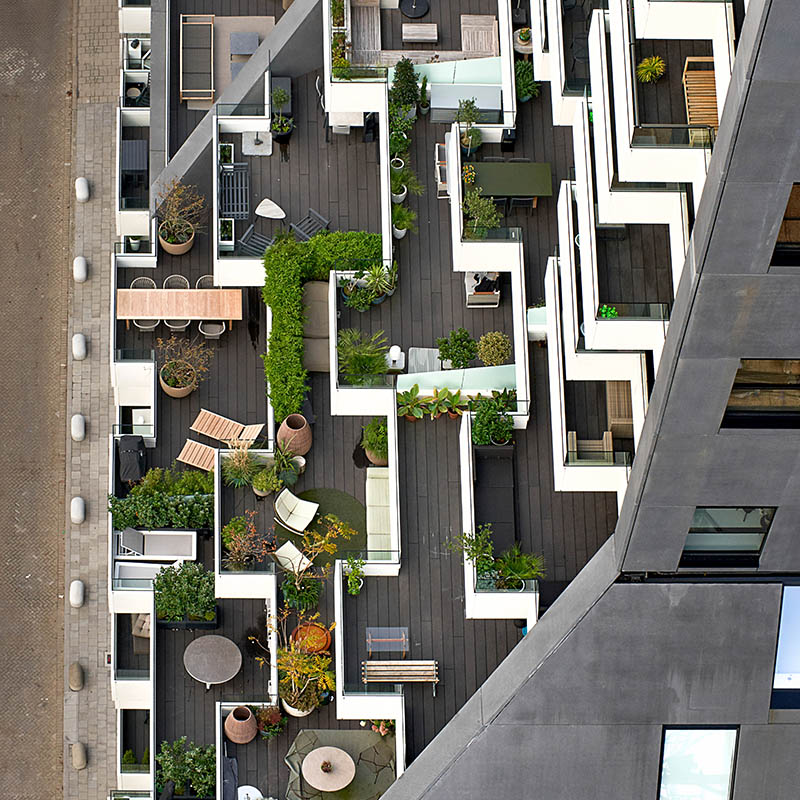 The large balconies have panoramic views over the Rotterdam city center on the north side, and over the river Maas on the south side. 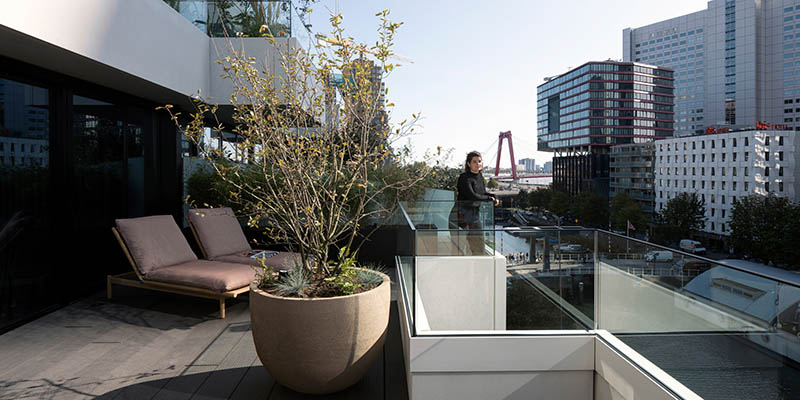 With the design of this new iconic high-rise building in Rotterdam, Barcode Architects was ahead of the curve. The Muse served as an inspiration in the development of the Rotterdam high rise vision, which was presented last year. By 2040, 50,000 homes are to be built in Rotterdam. Densification is a solution, but sky-high anonymous volumes, in which residents hardly know their neighbours or experience a sense of community, are a drawback. The 2019 high-rise vision focused on the development of the human city, with more social interaction between residents, vitality and vibrancy at street level, and healthy living and working conditions.

The focus on a resident community, the activation of the street and renewed urban living qualities make the design of The Muse a prime example for the realization of this vision. The hospitality features and other communal functions ensure the desired social interaction between the residents. This makes The Muse the epitome of the new urban development flourishing in Rotterdam.