More than a new interpretation, the Neue Nationalgalerie refurbishment in Berlin by David Chipperfield Architects is a respectful repair.

The Neue Nationalgalerie (New National Gallery) is an iconic museum for modern art in Berlin. It is part of the National Gallery of the Berlin State Museums. The museum building and its sculpture gardens were designed by Ludwig Mies van der Rohe and built from 1963 to 1968.

The steel and glass architecture is the only building designed by Mies van der Rohe in Europe after his emigration to the USA. 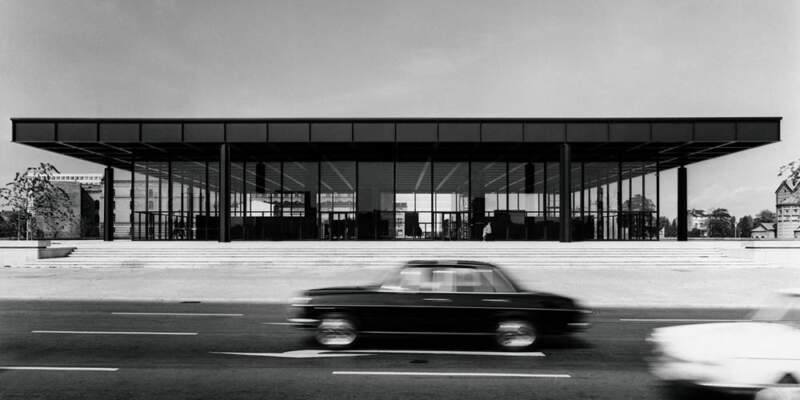 The building’s architectural structure has remained virtually unchanged ever since. The urban setting in which it stands, however, has undergone radical changes: the Staatsbibliothek (Berlin State Library) emerged at almost the same time as the Neue Nationalgalerie, on the opposite side of Potsdamer Strasse, and was followed by the Kammermusiksaal (or ‘chamber music hall’) erected next to the Philharmonie, which by this point was already standing. These buildings were joined over time by a cluster of museums in the form of the Kulturforum, and, after German reunification, by the urban redevelopment of Potsdamer Platz.

The Neue Nationalgalerie is divided into two distinct stories. The upper story serves as an entrance hall as well as the primary special exhibit gallery. It is elevated from street level and only accessible by three flights of steps. 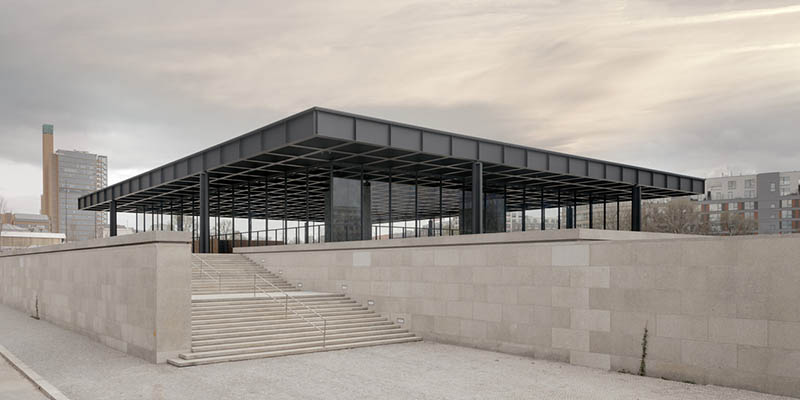 Though it only comprises a small portion of the total gallery space, the exhibition pavilion stands boldly as the building’s primary architectural expression.

The lower story serves primarily as housing for the gallery’s permanent collection, though it also includes a library, offices, and a shop and a café.

It is three-quarters below ground so as to allow for safe storage of the artwork, its sole glazed façade looking out on the museum’s sloping sculpture garden and providing ample indirect interior lighting. A rooftop plaza further extends the museum’s exhibition space.

After almost fifty years of intensive use, the museum dedicated to the art of the 20th century, required a comprehensive refurbishment.

The existing fabric has been refurbished and upgraded by David Chipperfield Architects to current technical standards with a minimum of visual compromise to the building’s original appearance. 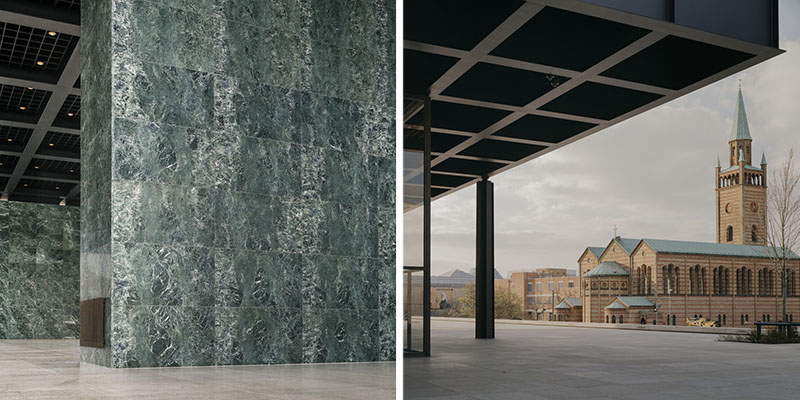 The functional and technical upgrades include air-conditioning, artificial lighting, security, and visitors’ facilities, such as cloakroom, café and museum shop, as well as improving disabled access and art handling.

The necessity of an extensive repair of the reinforced concrete shell and the complete renewal of the technical building services required an in-depth intervention. 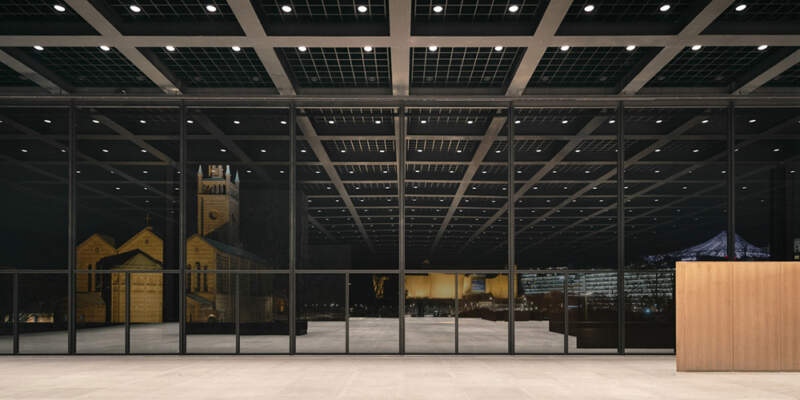 In order to expose the shell construction, around 35,000 original building components, such as the stone cladding and all the interior fittings, were dismantled. After their restoration and modification where necessary, they were reinstalled in their precise original positions.

The key to the complex planning process for this project was finding a suitable balance between monument conservation and the building’s use as a modern museum. 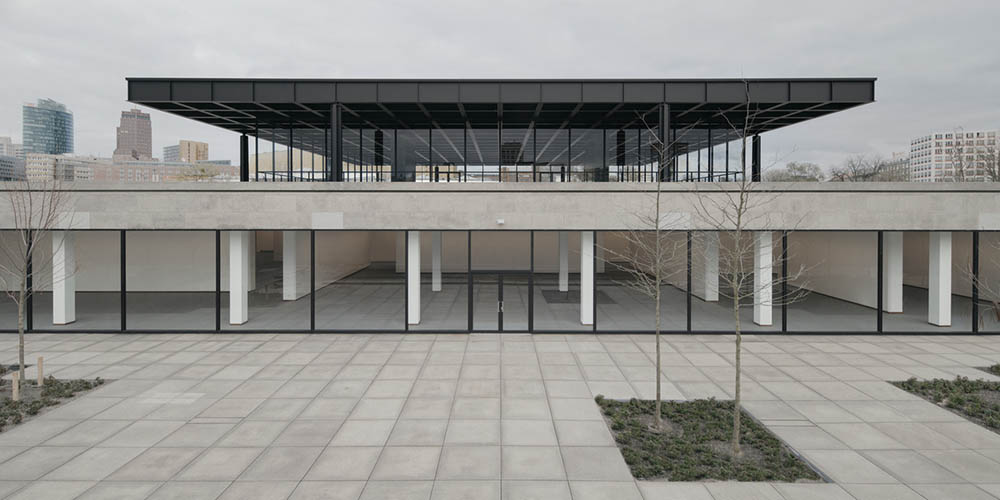 The unavoidable interventions to the original fabric within this process had to be reconciled with preserving as much of the original substance as possible.

Though the essential additions remain subordinate to the existing design of the building, they are nevertheless discreetly legible as contemporary elements.

The refurbishment project does not represent a new interpretation, but rather a respectful repair of this landmark building of the International Style. 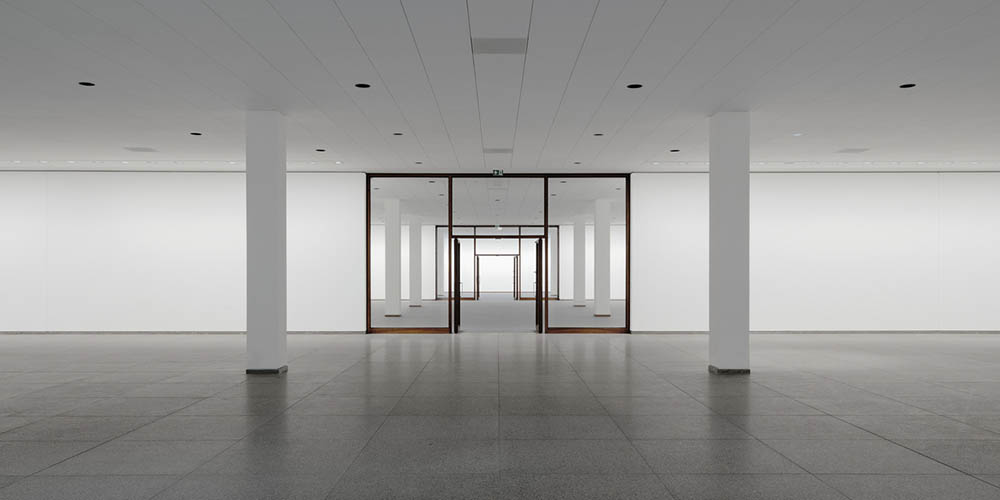 Welcome to ARCHIVIBE Your personal data (address or phone number, your user ID and password, e-mail address) are collected and processed by ARCHIVIBE for purposes strictly related to the proper use of the website and its information services, with information also provided by third-party advertisers. Your personal information may also be used in other processing operations, however, in a manner in line with these purposes. Your personal data is processed electronically and will be stored in a way that allows you to be identified for the time strictly necessary for the purpose for which the data was collected and subsequently processed and, in any case, within the limits of the law. To ensure that your personal information is always correct and up-to-date, relevant and complete, please inform us of any changes at: [email protected] Your personal information will not be disclosed to third parties for purposes not permitted by law or without your explicit consent. While using and browsing on our websites, some personal information may be collected automatically (by means of so-called "Cookie"), like, for example, the collection of the user's IP address and other information relating to browsing the website or the user's preferences expressed when choosing the services offered by the site. This information and data are collected directly and automatically by the web site and as part of its operational functions. Cookies serve different purposes. Cookies allow a site, for example, to: - Remember your login information - Offer you safe browsing after a login - Optimise the website performance by reducing the loading times of the pages you visit - Improve the user experience - Ensure a consistent appearance to the site - Remember the list of your favourite products - Remember the contents of your shopping cart - Remember the order at the moment of your arrival on the site - Allows you to use the "share" and "like" features - Send information to other websites for the personalisation of their advertisements Besides the cookies installed by the site, we use some third-party services that use external cookies. The purposes for which information is collected by these cookies are divided into the following types: > Analytical purposes, i.e. cooking serving to collect statistical information on the traffic and service use by the users, for example, how many visitors visited the site in a given period of time, which pages were visited, the duration of the visit etc.. This information is collected anonymously, and is not connected in any way with the personally identifiable information of the users who have visited the site. For this type of monitoring, we use the following third-party services: Google Analytics > Social sharing purposes. Some social networks may activate cookies for the proper functioning of their content sharing services. For example, when a site page contains a "share" or "like" button, the selected social channel establishes a direct connection to the site. The transmission of data to social networks is governed by the privacy policies and by the terms of use of the cookies of these companies, to which reference should be made for further information. Below is the list of social media networks used on the site: Facebook, LinkedIn, Instagram
<link rel='stylesheet' id='avada-min-768-max-1024-p-header-legac