Negozio Olivetti in Venice was a showcase designed by Carlo Scarpa for the Ivrea-based company’s products that takes his name from his founder Adriano Olivetti: an Italian engineer, politician and industrialist whose entrepreneurial activity thrived on the idea that profit should be reinvested for the benefits of the whole society.

Olivetti was an entrepreneur and innovator who transformed shop-like operations into a modern factory. In and out of the factory, he both practiced and preached the utopian system of “the community movement”. Adriano Olivetti’s era saw great changes in Italian business and in industrial relations.

The enlightened enterpreneur asked the Venetian architect Carlo Scarpa, one of the most important architect of 20th century, to design the Negozio Olivetti as a splendid showcase for the celebrated typewriters and calculators produced by Olivetti.

Shortly after its launch, it was transformed into an exhibition space for small yet prestigious art shows. In 1997 Olivetti closed its prestigious flagship store. The following year a souvenir shop was opened here, an activity not really in keeping with the fine architecture of the premises.

Carlo Scarpa’s hallmark is the meticulous attention to details and to the materials used combined with an outstanding spatial quality to form a stunning seamless whole. This is the extraordinary tale narrated by the Negozio Olivetti in Piazza San Marco in Venice.

In early 2011, following the careful restoration commissioned by the owners, Assicurazioni Generali, the showroom was entrusted to FAI, the National Trust for Italy, which has finally opened it to the public again.

“2011 finally saw the arrival of the moment in which one of the masterpieces of the Venetian architect – the Negozio Olivetti in St Mark’s Square – was at last restored to its former glory, for the benefit both of the city that plays host to it and of the wider international community, which had for many years felt a sense of angst about what appeared to be, until very recently, the building’s fate” (Francesco Dal Co)

The unit measures 21 metres in depth, 5 in width and 4 in height, and originally appeared as a rather cramped, gloomy space, divided into two sections by a wall, with two small staircases leading to an upper floor and a mezzanine, both of which were very low. Scarpa completely reorganised the space, eliminating the dividing wall, inserting two long balconies along the sides and placing the staircase at the centre of the newly created room, transforming it into the pivotal point of the space. 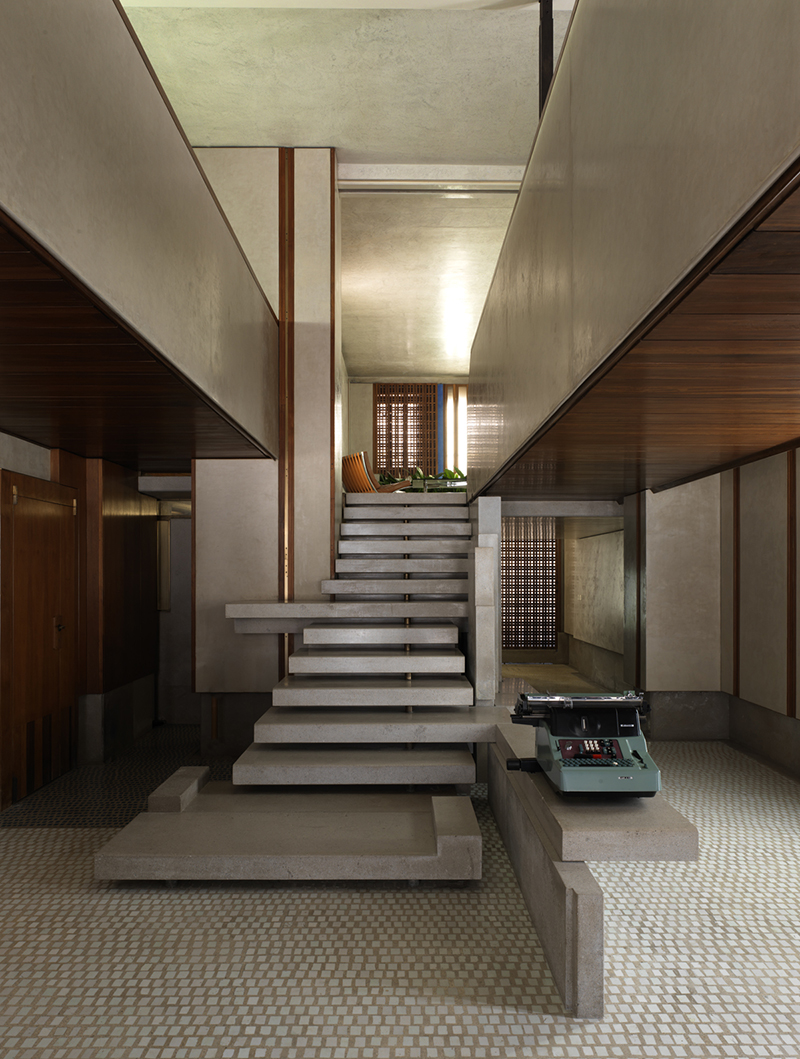 Another focal point is constituted by Alberto Viani’s 1956 sculpture entitled Nudo al sole, which the architect sited above a black Belgian marble plinth covered by a veil of water in subtle motion. Moreover, Scarpa increased the number of windows and created the flooring using a mosaic of irregularly shaped glass tesserae, the various colours of which denoted the different areas of the showroom: the front entrance area is red, the central section white/grey, the side entrance blue and the rear yellow. 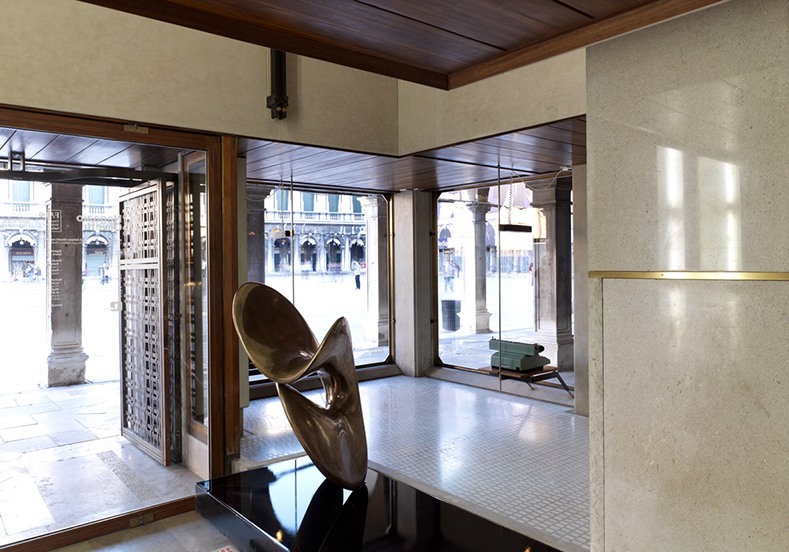 Although the number of materials used is limited, all of them were carefully selected: Aurisina marble slabs for the (pre-existing) pillar and flooring of the mezzanine landing; rosewood for the shelves on which the Olivetti machines rest, anchored to the ground only at the front and supported by stainless steel poles; and African teak for the balconies. The walls are made of Venetian plaster over panels, interspersed with vertical fluorescent lights protected by sheets of frosted glass. Additional illumination is provided by sliding ebony lamps on steel cables. The bevelled-glass windows are mounted into the facade and feature visible filled screws and metal casings with cut-off corners that soften the right angles of the frames. 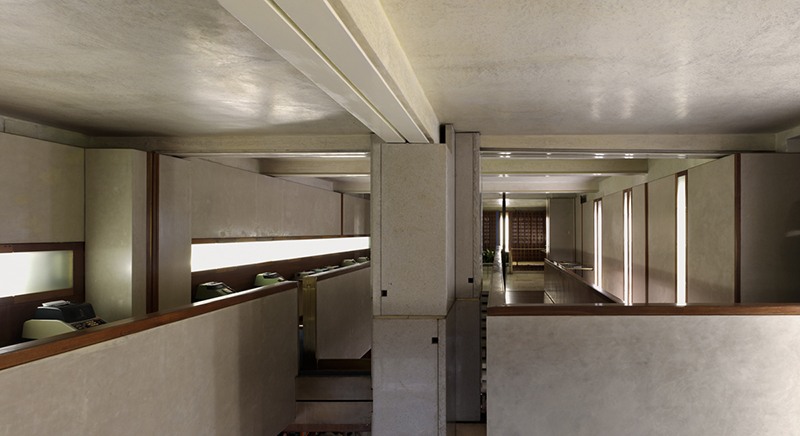 On the upper floor, the windows that look onto the square are internally screened by sliding oval grates made from teak and rosewood, whereas the shelves for the typewriters are made from rosewood or metal and glass. The two rooms at the side – one of which is still fitted out for use as an office – have either plaster walls or walls with a Venetian stucco finish. 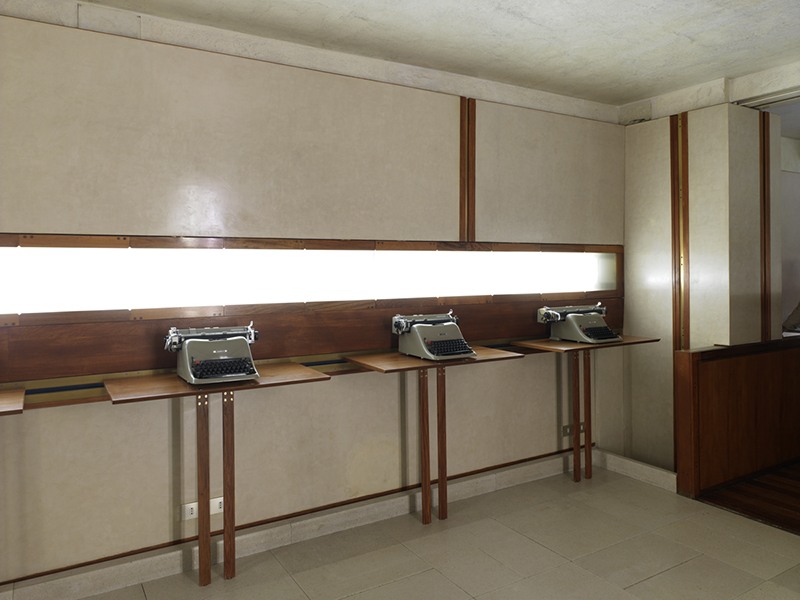 The motif on the teak grate is also found on the covering of the “water door” that opens out onto the canal at the rear; here you can also see the lower section of the tall stone-and-stucco pilaster that continues into the mezzanine with a flower-holder compartment. 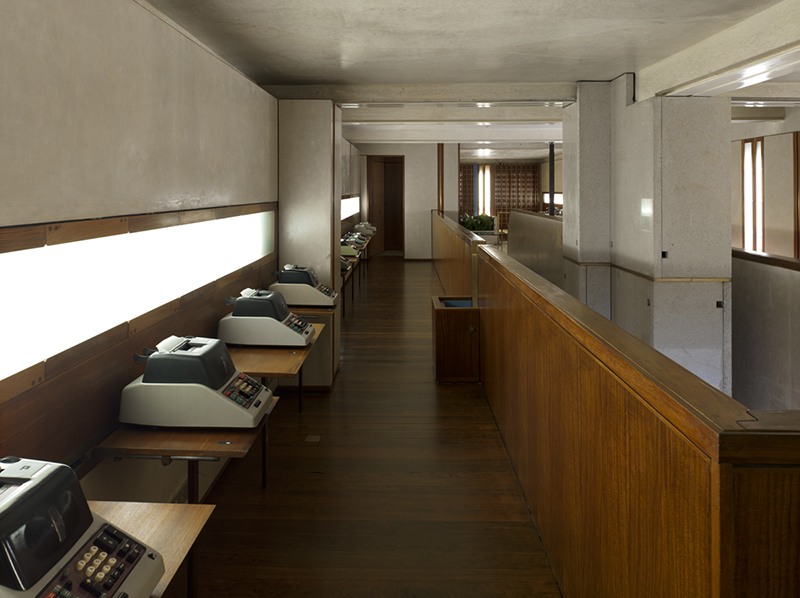 Thanks to the donation of machines by Olivetti, the current FAI set up reconstructs the original display of calculators and typewriters.

Brief description the Negozio Olivetti by Lucia Borromeo Dina
Photo credit: Marco Introini
special thanks to FAI for the collaboration