If you are searching for an authentic Italian modernist architecture full immersion experience you have to visit Tresigallo, an Italian village immersed in the quiet of the swamps in the province of Ferrara.

Today Tresigallo is known as “The metaphysical city” because it comprises some modernist-style buildings that seem to have come out from the De Chirico’s canvases. It has the largest collection of Fascist-era buildings of any settlement in Italy.

Despite its medieval origins Tresigallo suffered a transformation by the Fascist Minister of Agriculture Edmondo Rossoni during the Italian Fascist period, which made it an open-air museum of early 1900s architecture.

From his ministry in Rome, Edmondo Rossoni developed and supervised the new village “masterplan”, completely rebuilding it as a utopian city from 1927 to 1934. Tresigallo underwent a radical transformation that changed the town from a small rural village to an ideal city of the Rationalist architectural avant-garde.

Italian Rationalism took its cue from architects such as Henri Labrouste, Auguste Perret, Hendrik Petrus Berlage and Le Corbusier and aimed to enhance the purity of the Function by eliminating from the classical stylistic elements all elements deemed superfluous and “baroque”. 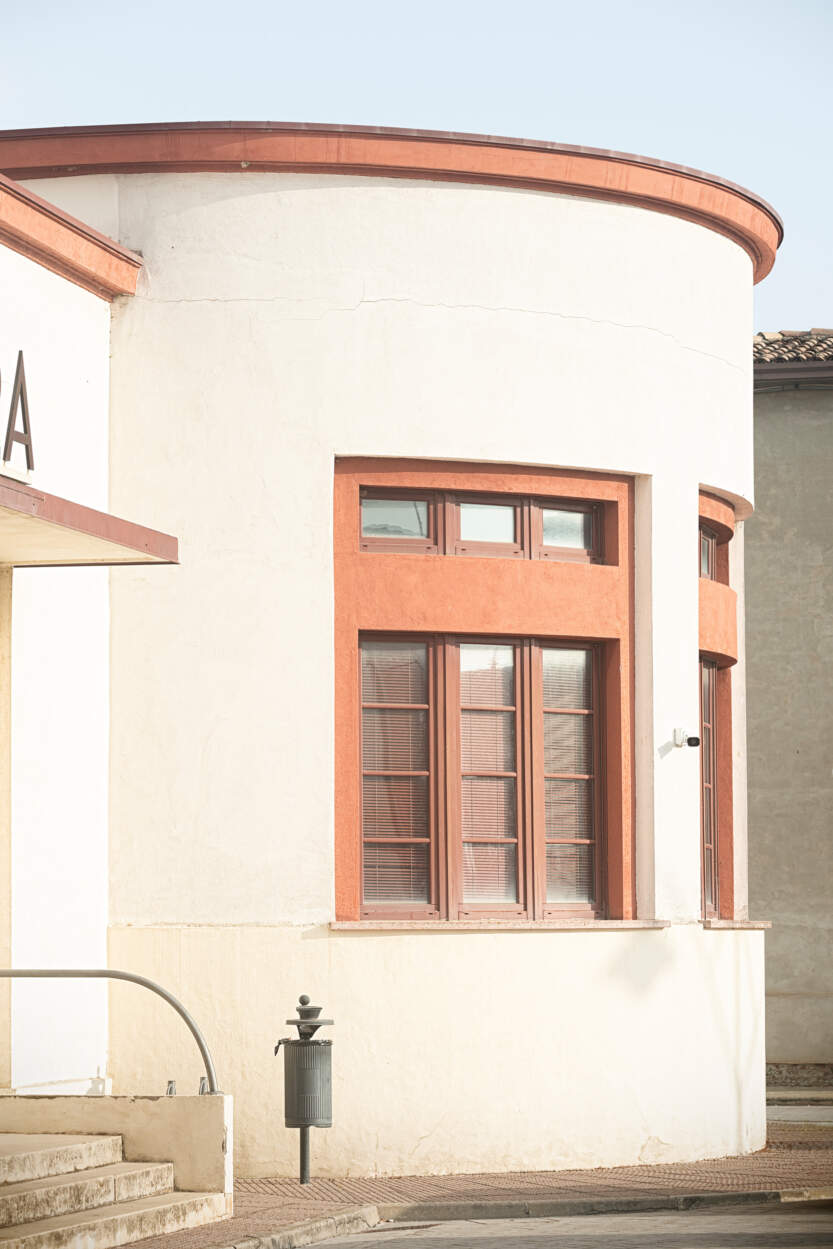 Rational modernist architecture thrived in Italy from the 1920s to the 1940s, under the support and patronage of Mussolini’s Fascist regime. In 1926, a group of young architects – Sebastiano Larco, Guido Frette, Carlo Enrico Rava, Adalberto Libera, Luigi Figini, Gino Pollini, and Giuseppe Terragni.

Differently from any other Fascist-era settlement, Tresigallo distinguishes itself for its humanism of its design.

Other Fascist-era urban developments were either company towns built around factories or vanity projects intended only to glorify Mussolini. In Tresigallo, Rossoni envisaged a utopia based around people, with everything geared towards improving their lives.

By 1939, the population had risen from 500 to 9,000. Tresigallo was beginning to look like a city but the outbreak of World War II and its consequences put an end to the project.

All the modernist architectures have been reconverted: the iconic building in the cover image was the locker room (BAGNI in Italian) transformed into the urban center SOGNI (dreams), the gym into the Casa della Cultura (library and a cultural center), “Casa del Fascio” became the Carabinieri barracks, to name a few.

Itinerary among the modernist architecture of Tresigallo

Tresigallo can be easily visited on foot, walking along the wide avenues of the center and the scenic squares. The large urban spaces, in fact, are oversized compared to the inhabitants of the town and provide Tresigallo with a visual grandeur typical of a large metropolis. 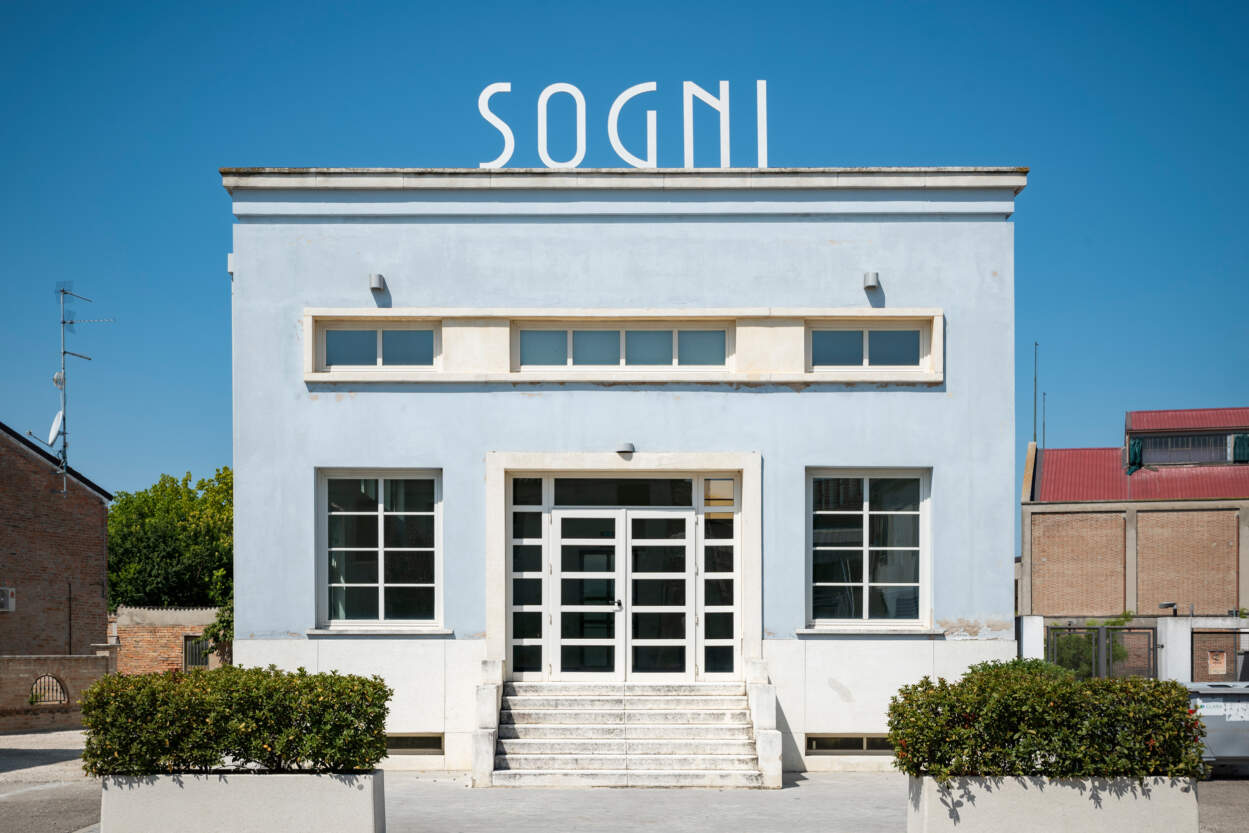 The starting point for visiting Tresigallo is undoubtedly the iconic Urban Center SOGNI. 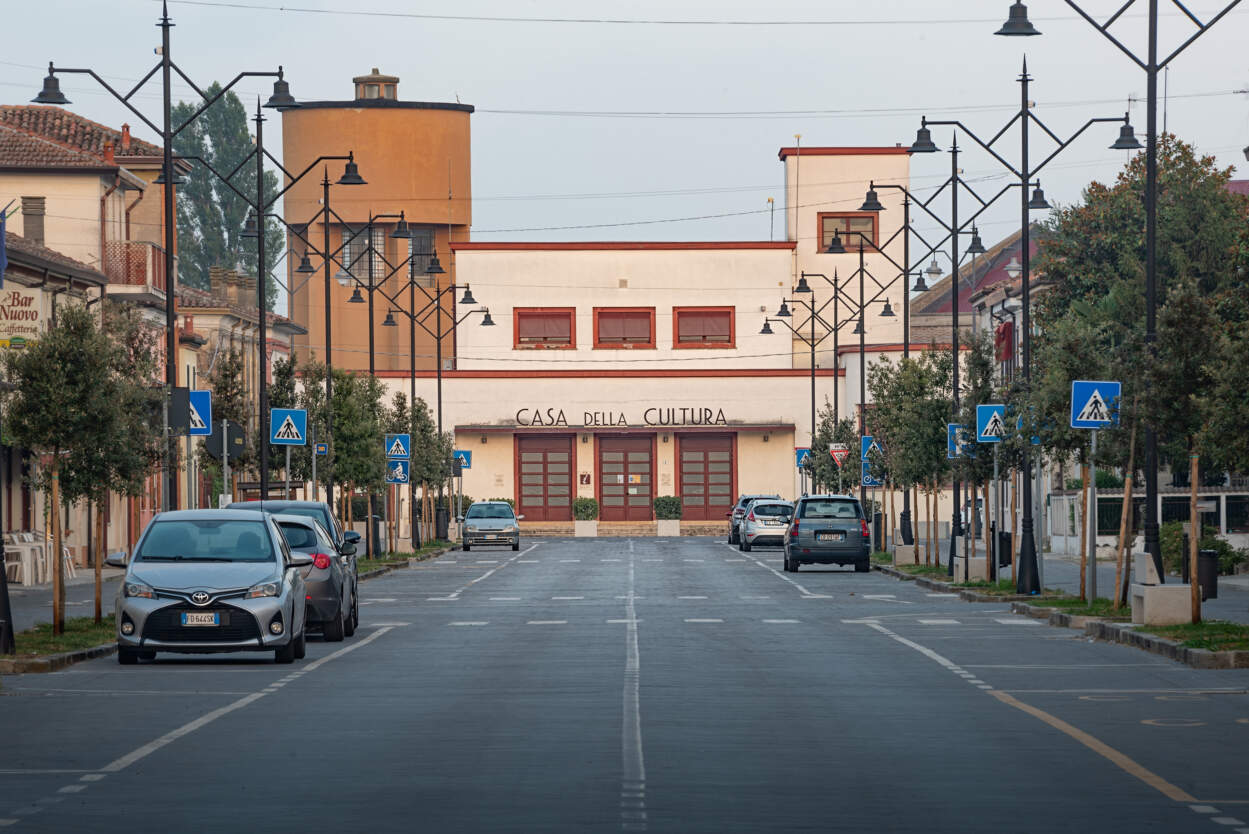 Leaving the Casa della Cultura behind, you can walk down the large avenue of Via Roma where some of the most important modernist buildings are located: Teatro ‘900, which today is a host association, the Bar Roma, abandoned and decadent, which nevertheless retains original elements are the iron windows and the stone ceramic coverings, and “Casa del Fascio”. 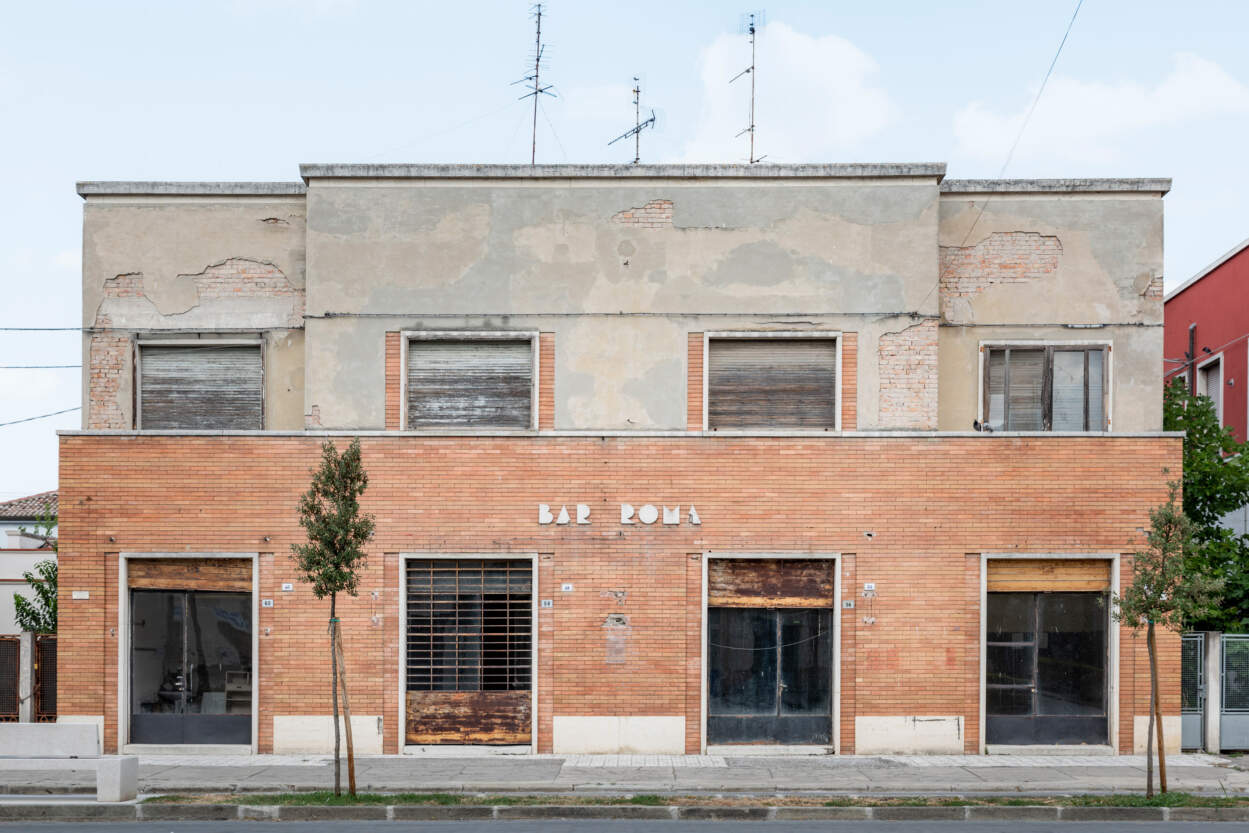 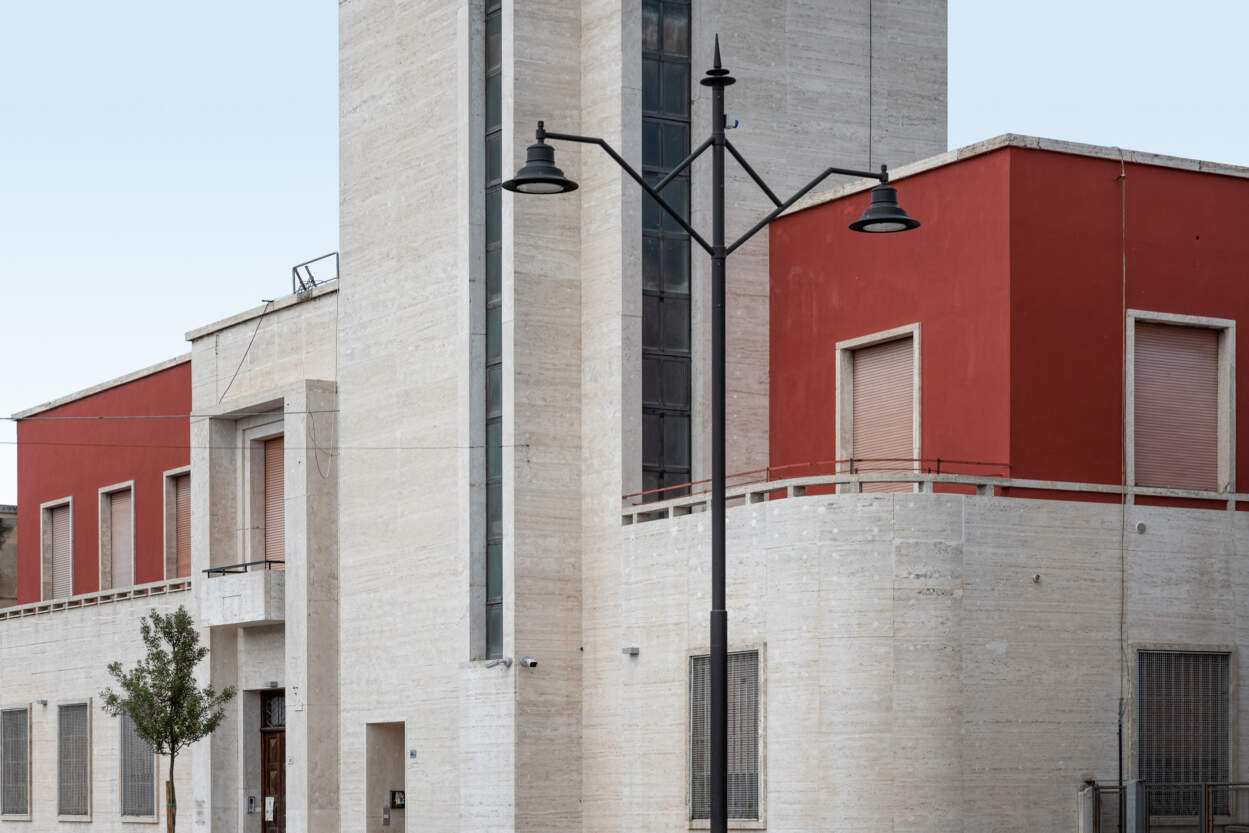 Via Roma ends in the first large square of Tresigallo: Piazza Italia, which houses some religious buildings and which introduces the architectural element of the classic portico, reinterpreted in a rationalist way.

The large church, together with the porch with contrasting plastered reinforced concrete columns, gives the square a great visual and scenographic impact, connecting it with via Verdi, where the other modernist architectures stand: Casa del Ricamo (House of Embroidery) today abandoned, and the twin building Ex O.N.M.I.(Opera Nazionale Maternità e Infanzia) today the municipal nursery. 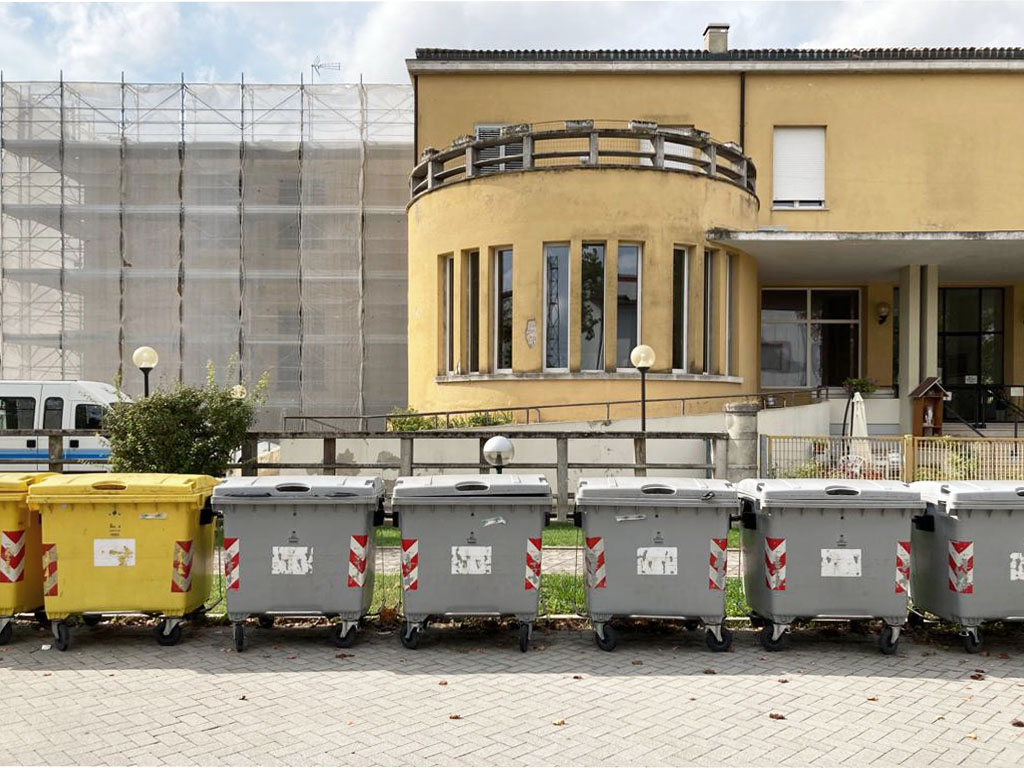 Next to the nursery, there is today’s Tresigallo Rest Home, which in the past was instead conceived to be a luxury hotel suitable for hosting entrepreneurs and prominent personalities of the Fascist regime.

At the end of via Forlanini, on the left of the square, there is the Domus Tua, a scenographic construction dominated by the large central turret that was born as a ballroom, but which today houses private apartments. 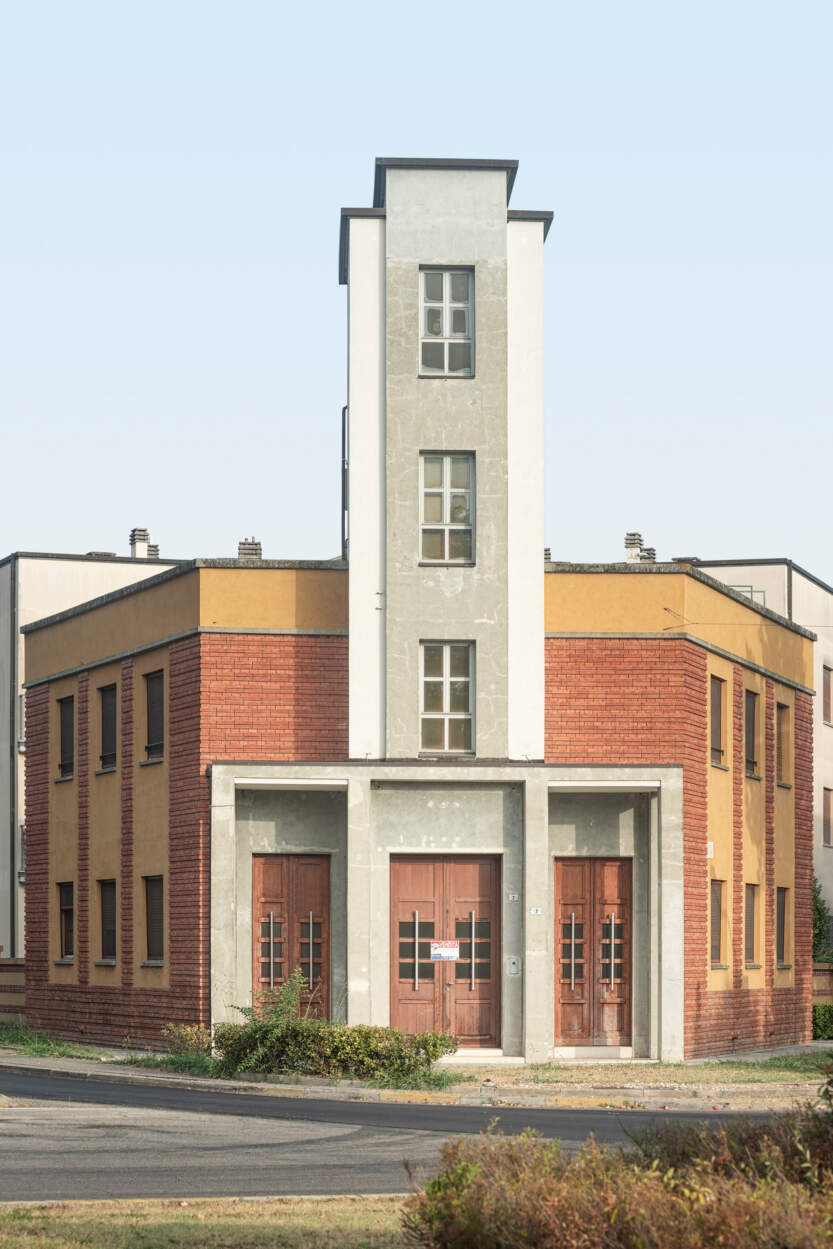 Right next to it is the Carlo Forlanini elementary school plastered in green, followed on the right by the monumental entrance to the sports center. The latter, covered in marble, is inspired by the shapes of a triumphal arch, to underline the affinities with classical Romanism which the regime wanted to re-appropriate. 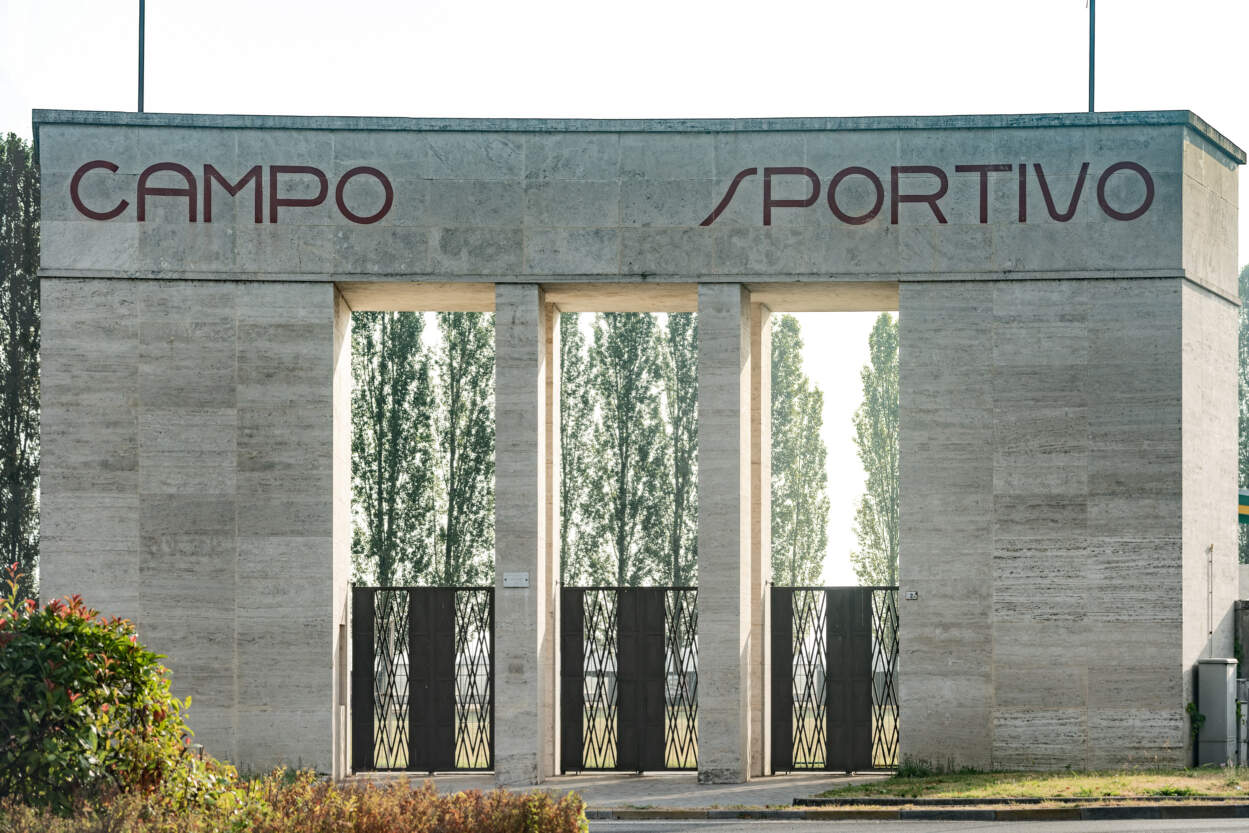 Following via del Mare which passes next to a large hospital, you then arrive at the entrance to the large D-shap Piazza della Repubblica (formerly the Revolution Square). 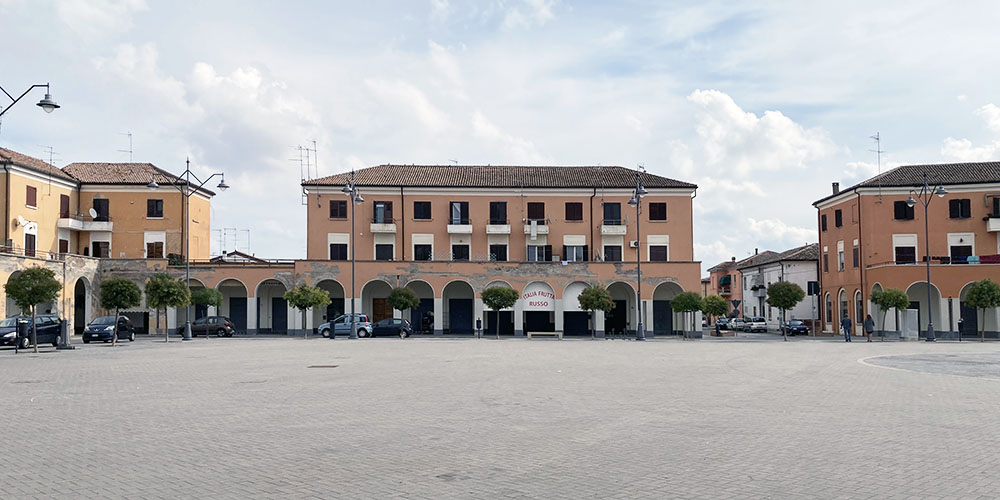 The vastness of the square and the white colonnade on orange buildings make the complex extremely elegant and majestic. However, although it is located in a central position with respect to the town, there are no buildings designed to host civil, political or religious functions. According to Rossoni’s corporate ideology, in fact, this place was to be dedicated to commerce and private activities. 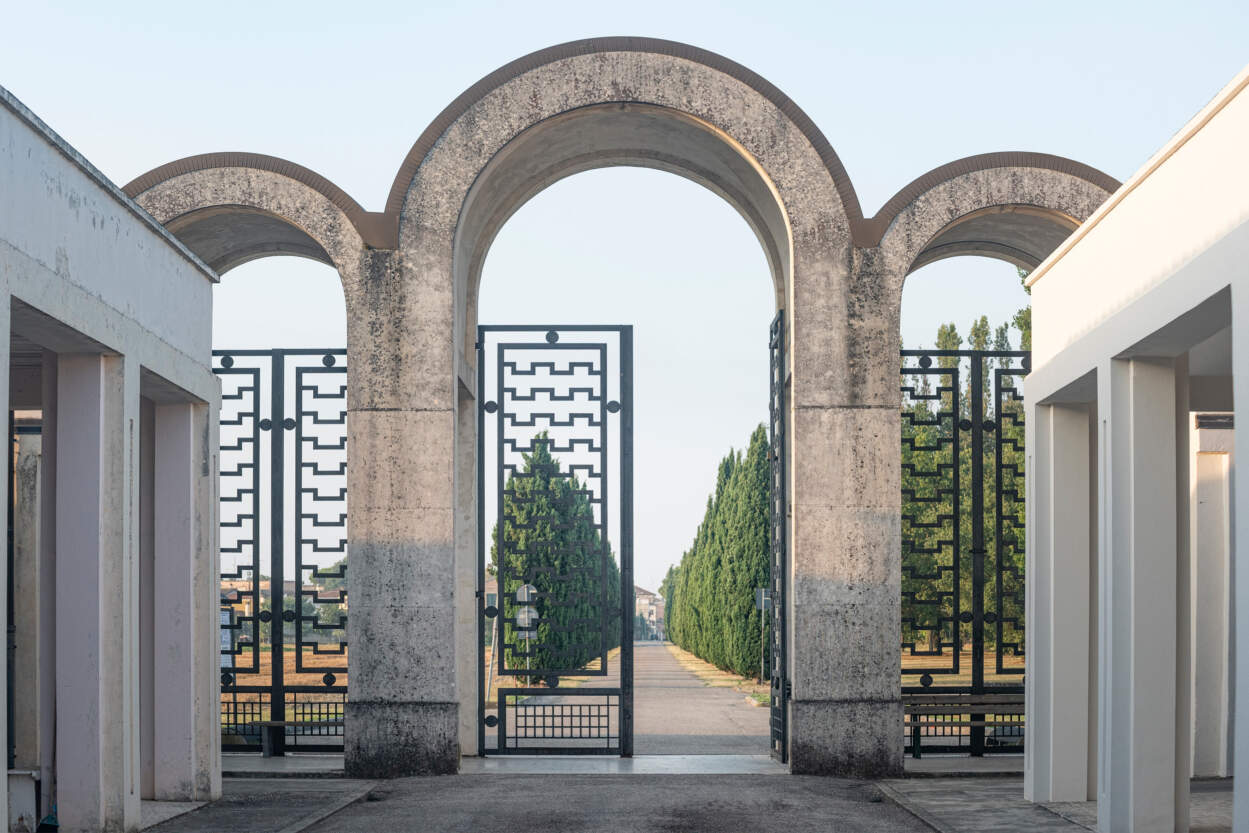 From the straight side of the square you can glimpse at the end of via Corridoni the large Monumental Cemetery which ideally concludes our modernist architecture itinerary to visit Tresigallo.