Great Court at the British Museum by Foster + Partners

Great Court at the British Museum by Foster + Partners

Great Court at the British Museum by Foster + Partners was one of London’s long-lost spaces. Originally a garden, soon after its completion in the mid-nineteenth century it was filled by the round Reading Room and its associated bookstacks. Without this space the Museum was like a city without a park. This project is about its reinvention. 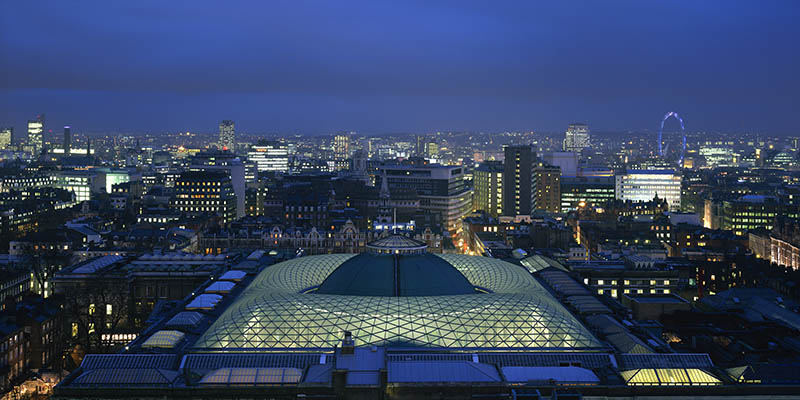 With over six million visitors annually, the British Museum is as popular as the Louvre or the Metropolitan Museum of Art. However, in the absence of a centralised circulation system it was congested and difficult to navigate. The departure of the British Library was the catalyst for removing the bookstacks and recapturing the courtyard as a new public focus. 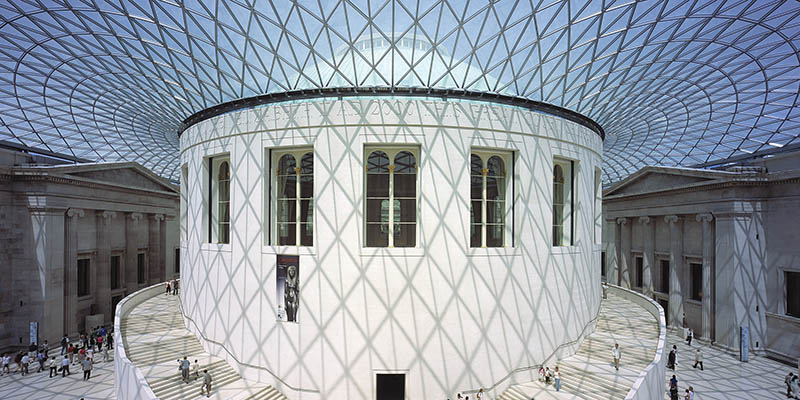 Great Court at the British Museum by Foster + Partners is entered from the Museum’s principal level and connects all the surrounding galleries. Within the space there are information points, a bookshop and café. At its heart is the magnificent volume of the Reading Room, now a major exhibition space, which for the first time in its history is open to all. Broad staircases encircling the Reading Room lead to a temporary exhibitions gallery and a restaurant terrace. Beneath the courtyard are the Sainsbury African Galleries, an education centre and facilities for schoolchildren. 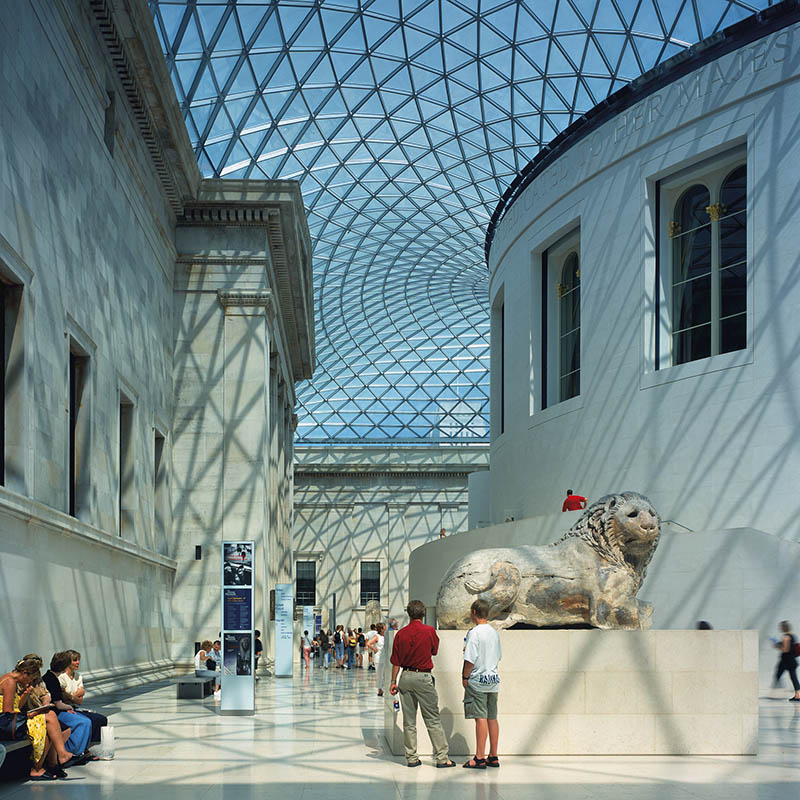 The glazed canopy that makes all this possible is a fusion of state-of-the-art engineering and economy of form. Its unique geometry is designed to span the irregular gap between the drum of the Reading Room and the courtyard facades, and forms both the primary structure and the framing for the glazing, which is designed to reduce solar gain. As a cultural square, the Court also resonates beyond the confines of the museum, forming a new link in the pedestrian route from the British Library to Covent Garden, the river and the South Bank. To complement this artery, the Museum’s forecourt was restored to form a new civic space. Together with the Great Court, it is a major new amenity for London. 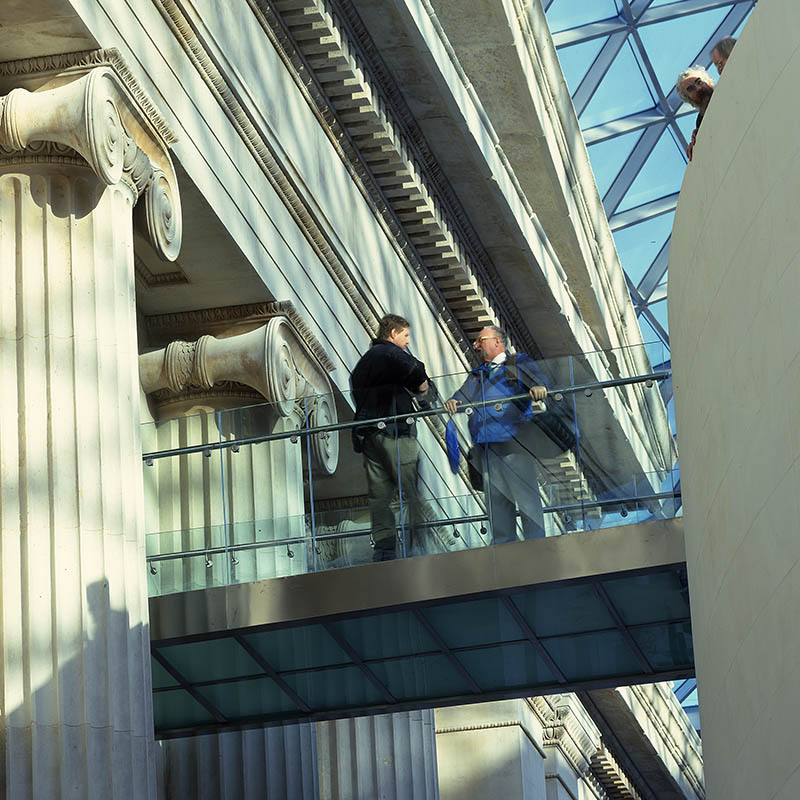 Welcome to ARCHIVIBE Your personal data (address or phone number, your user ID and password, e-mail address) are collected and processed by ARCHIVIBE for purposes strictly related to the proper use of the website and its information services, with information also provided by third-party advertisers. Your personal information may also be used in other processing operations, however, in a manner in line with these purposes. Your personal data is processed electronically and will be stored in a way that allows you to be identified for the time strictly necessary for the purpose for which the data was collected and subsequently processed and, in any case, within the limits of the law. To ensure that your personal information is always correct and up-to-date, relevant and complete, please inform us of any changes at: [email protected] Your personal information will not be disclosed to third parties for purposes not permitted by law or without your explicit consent. While using and browsing on our websites, some personal information may be collected automatically (by means of so-called "Cookie"), like, for example, the collection of the user's IP address and other information relating to browsing the website or the user's preferences expressed when choosing the services offered by the site. This information and data are collected directly and automatically by the web site and as part of its operational functions. Cookies serve different purposes. Cookies allow a site, for example, to: - Remember your login information - Offer you safe browsing after a login - Optimise the website performance by reducing the loading times of the pages you visit - Improve the user experience - Ensure a consistent appearance to the site - Remember the list of your favourite products - Remember the contents of your shopping cart - Remember the order at the moment of your arrival on the site - Allows you to use the "share" and "like" features - Send information to other websites for the personalisation of their advertisements Besides the cookies installed by the site, we use some third-party services that use external cookies. The purposes for which information is collected by these cookies are divided into the following types: > Analytical purposes, i.e. cooking serving to collect statistical information on the traffic and service use by the users, for example, how many visitors visited the site in a given period of time, which pages were visited, the duration of the visit etc.. This information is collected anonymously, and is not connected in any way with the personally identifiable information of the users who have visited the site. For this type of monitoring, we use the following third-party services: Google Analytics > Social sharing purposes. Some social networks may activate cookies for the proper functioning of their content sharing services. For example, when a site page contains a "share" or "like" button, the selected social channel establishes a direct connection to the site. The transmission of data to social networks is governed by the privacy policies and by the terms of use of the cookies of these companies, to which reference should be made for further information. Below is the list of social media networks used on the site: Facebook, LinkedIn, Instagram
<a href="#" id="