EartH (Evolutionary Arts Hackney) is a multi-arts space for the 21st Century. Programming is broad, global, open and rooted in the highest quality artistic pursuit. They bring together both the leading, rising and most important talents of all fields under one roof and provide a vital new home for this in London, United Kingdom.

EartH (Evolutionary Arts Hackney) launched a joint crowdfunding campaign with their venue down in Shoreditch Village Underground, to raise funds that will help them cover ongoing expenses, to resume operating during this unpredictable crisis and to continue once it is over.

EartH is located in an Art Deco former cinema, creating a large theatre in the original upper auditorium and a concert hall at ground level. 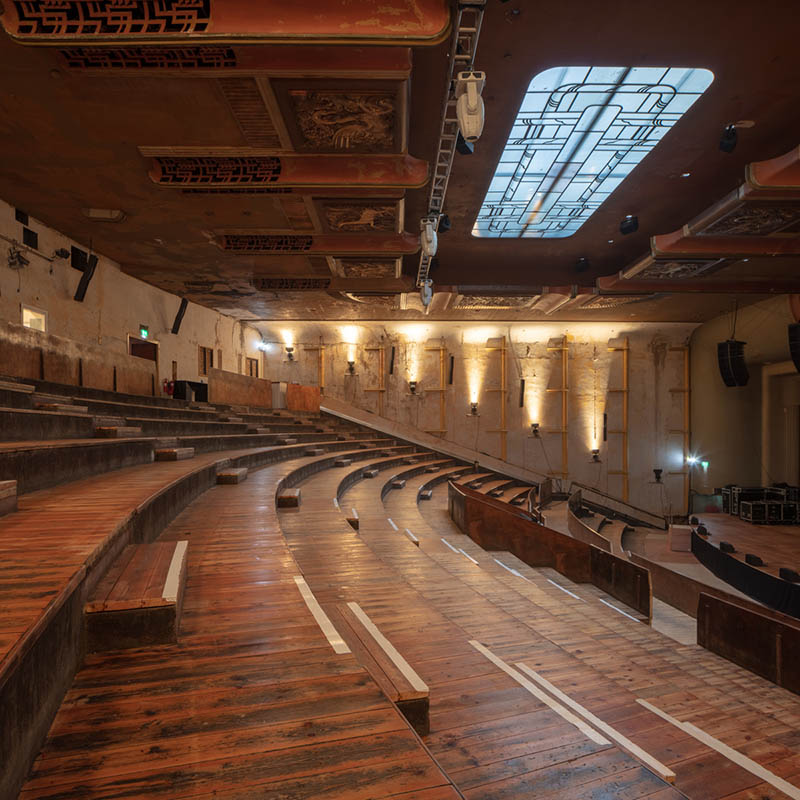 Transit Studio were the interior designers across EartH, helping with a light touch refurbishment to the theatre and concert hall as well as designing Earth Kitchen. They worked with Webb Yates and Interrobang with the client Auro Foxcroft of Village Underground to bring the project to life.

EartH Kitchen is an evolving dining experience, within the former lobby space of the cinema.

The idea was to create a space that would evolve from day to night, from a neighbourhood hangout by day to a delicious food offering across lunch and dinner, with linkage into pre and post show events tied to the two venues within the building.

“It was incredible to be involved across all three spaces of the project, the theatre, the concert hall and EartH Kitchen, to bring these extraordinary interiors back to life, and creating a signature project on a minimal budget that really adds to London’s cultural scene. We wanted to create a contemporary and fresh vision that suited the extraordinary volume of EartH Kitchen, and we look forward to its new lease of life.”  says Ben Masterton-Smith, Director at Transit Studio. 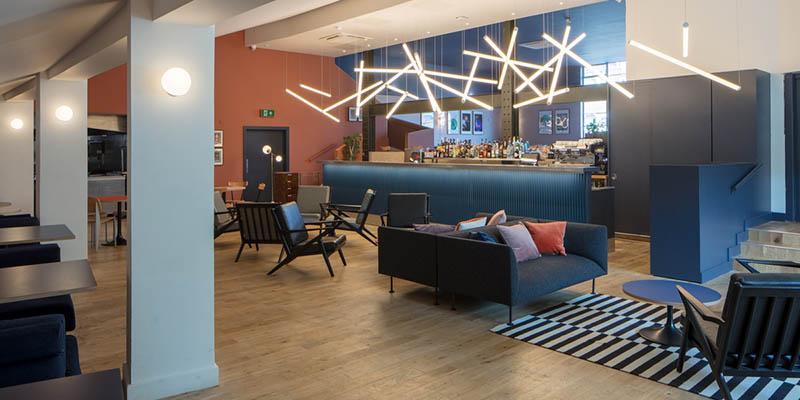 The addition of the EartH Sessions program to EartH Kitchen brings music into the heart of the scheme, with a dazzling revitalised Tannoy speaker system.
The space was formerly Efes, a late night pool hall and mini golf course. The space although large was uncared for, dark and unwelcoming.

The restoration project was to create an inviting space on the first floor, with a light and bright interior.

The main bar and lounge is arranged under the rake of the seating, with the theatre kitchen visible at on end, and a new window to the south with the feature speakers and dj booth. The centre of the restaurant is defined by the bar and a custom feature light.

The lighting design project was designed as three dimensional abstraction of a sequence of frozen music, captured in space, offering a dynamic experience as visitors move around the EartH Kitchen. 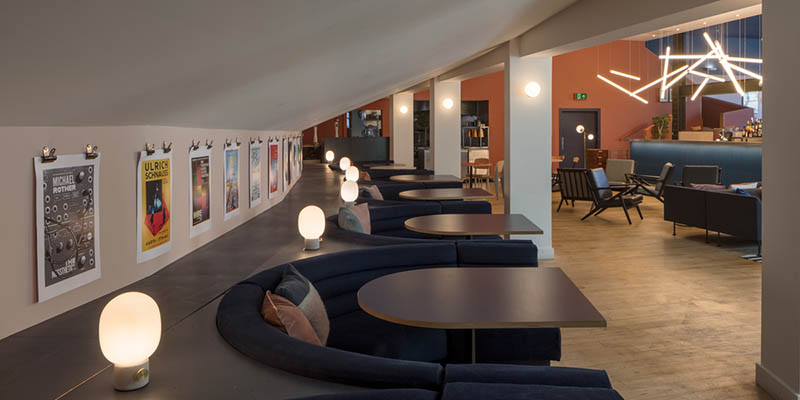 The main dividing wall between the restaurant and the lounge has been removed entirely, leaving the existing structure of the shell visible with the exposed beams, and allowing light to flood into the restaurant from the front of the building.
Across the open plan space, the layout has been divided into separate zones, split by the central bar, with each area feeling cozy and intimate.

The raised level (which had been the double height entrance lobby originally) is an intimate restaurant space by day, that evolves by night. 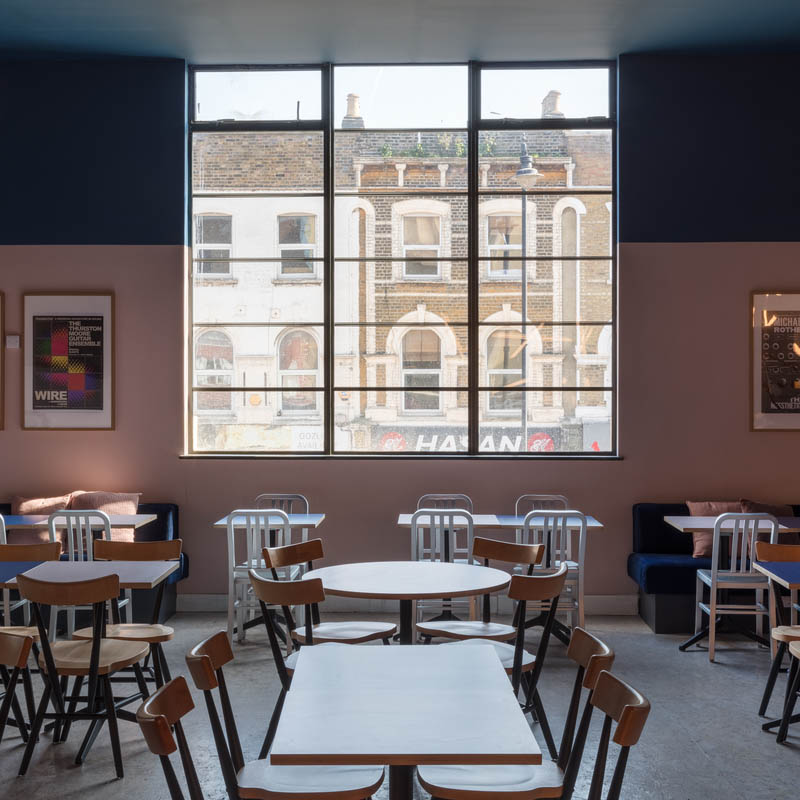 The ceiling in the raised area went up by almost two metres, with light flooding the space through the new feature window. Custom deco inspired contemporary wall lights surround the restaurant.

Keeping the space light and bright, the floor has been sanded back to reflect the light, with whitewashed osb used to cover the restaurant floor.

Feature colour tones are used throughout to break up the space, though pale walls allow the play of light by day and night creating a canvas of shadows.

Japanese denim has been used across the banquettes to give a relaxed and unpretentious aesthetic, with formica tables in complementary colours across the room.

The walls are filled with posters highlighting some of the incredible programming going on across the EartH venues, both past and future, along with a carefully curated selection of art.

A bold and intriguing entrance was called for as the restaurant sits on the first floor, drawing you up the stairs with bright graphic artwork, tucked around the corner in Truman Road, so as not to interfere with the flow of event traffic in the evenings.

Further phases of development are planned within EartH, including a recording studio and modern education centre in conjunction with the NGO Community Music.